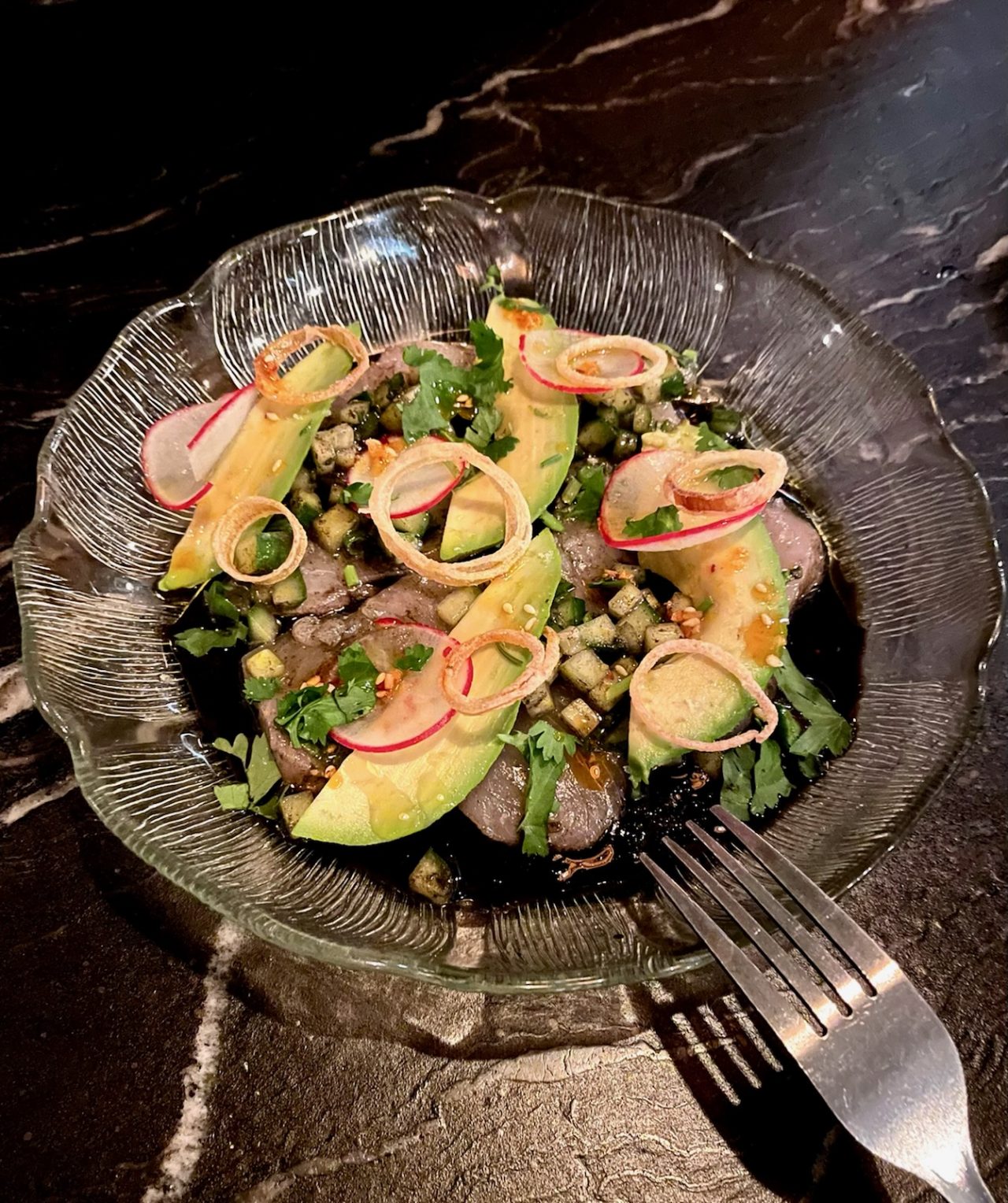 When Espiritu opened last January, it was cast as a bar not a restaurant, a let’s-get-crazy play place for drinkers unashamed to admit they like getting a little toasty. Under the short cocktail menu (five regular cocktails and one daily special) is a section called “Shots & Other Mistakes,” featuring nine possibly bad decisions (their verbiage, not mine). Here, you’ll find wild concoctions given hilarious names and descriptions, including Yeetlejuice (Jaeger cold brew, pineapple amaro, blueberry amaro, Red Bull), Do You Guys Have Fernet? (a house blend of Fernet) and Con Fuego, whose description says, “We’ll light something on fire. We love fire. Add this on to any drink or shot to impress your friends.”

See what I mean? Spirited, lively, fun, for sure, but not what you’d call serious or even particularly mature, right? Wrong. As it turns out, this dimly lit, narrow slip of a place, wedged between Proof Bread and Tacos Chiwas in Mesa, makes jokes about its alcoholic beverages but remains deadly serious about its food. In short, it’s not your typical bar turning out mediocre eats for drunk people but rather a bar with a limited, seafood-centric menu of exceptional dishes. One visit and, I swear, I’m completely hooked.

Silly me. I should have known this would be true, given the super-talents involved — namely Armando Hernandez and Nadia Holguin of Tacos Chiwas, Rene Andrade of Bacanora and Andrade’s cousin Roberto Centeno, who has worked with Andrade both at Ghost Ranch and Bacanora. Centeno is the executive chef at Espiritu now, but he helps out at Bacanora from time to time.

The menu is divided by dishes from the sea and dishes from the ranch, ten in all, both sections augmented with daily specials. This day, there’s hiramasa crudo, silken slices of amberjack bathed in salsa negra, a rich, smoky salsa composed of roasted garlic, onions, chiles and squid ink, the latter lending black color and subtle hints of umami. Overlaid with avocado slices, radish disks and thin, crispy spring onion rings, the salsa’s dark potency is lightened by cucumber and fresh cilantro, a dish to broaden your perspective on both crudos and salsas ($21). I hope it shows up again soon. It’s fantastic.

Ceviche mixto — a mixture of raw shrimp, cooked shrimp, red snapper, octopus, red onion, serrano pepper and cilantro — arrives in a round stack, a layer cake of seafood and veggies, surrounded by a spicy, amber puddle of chiltepin-sparked shrimp broth in which cucumber slices float. It’s sensational, another dish so textural and vibrant that I’m hard-pressed to recall a better version ($24).

Each of these dishes are great eaten with or scooped onto thin, puffy corn chips which Centeno calls “fluffed air tostadas.” I don’t know what’s going on here, and frankly, I don’t need to know the technicalities. They’re different from the usual corn chip, and I love them.

My companions and I are already blown away by the first three courses when out comes another ridiculously good daily special, ultra-crispy deep-fried red snapper, its crunchiness intensified by a liberal coating of sesame seeds. That salty, garlicky crunch against the mild, sweet fish flesh inside is sublime. For a bit of heat, a drizzle of oil-based sauce, electrified with chile Colorado and chile de arbol.

Centento says snapper is often featured as a special (more are bought for the weekend), and they come in various sizes ranging from 2 /12 – 5 pounds. Next time, I’m getting a bigger one than our 2 1/2 pounder ($45).

I should say right here that we ate nothing from the Del Rancho section of the menu, an oversight I intend to correct any minute now because who doesn’t want to see what Centeno will do with a hamburger or a grilled cheese? But it’s going to be hard to beat the Del Mar selections, I’m guessing.

Oh, and by the way, there are cocktails, clever, colorful cocktails, many of them riffs on classics — an excellent Bacanora-based Sonoran Sling, a tiki-tinged La Muerte, an ultra-smooth take on an old-fashioned called S.O.C.K.S. (which contains an ancestral corn liqueur) and an elegant, almond-y Mezcal-based dessert cocktail called Mordida, served with an ice cube carved with the restaurant’s fish logo. They were deliciously fun, every single one ($14-$16).

But I’m telling you, if you come here just to drink, you’re missing out. The food is phenomenal. Much like Andrade’s at Bacanora, it’s elevated and chef-y yet rooted in tradition.