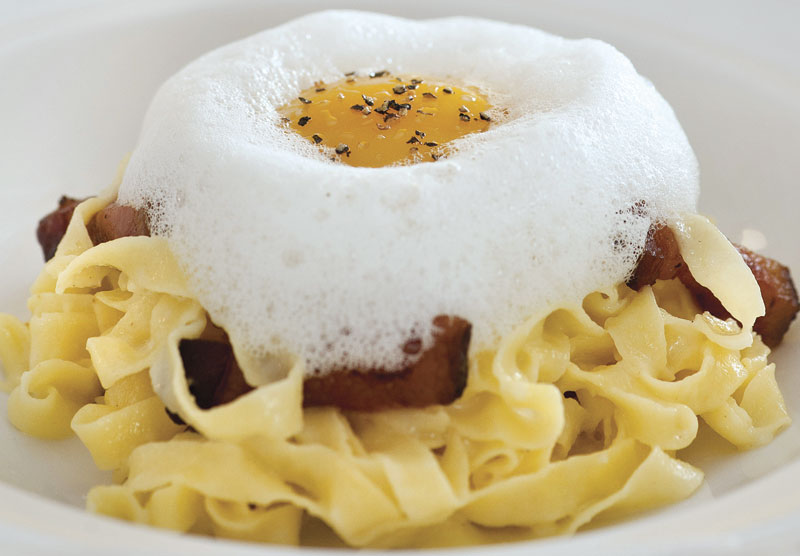 Flagstaff has been growing a bona-fide food scene for years now, thanks to restaurants like Paul Moir’s Brix, Kevin Heinonen’s Tinderbox, Caleb Schiff’s Pizzicletta and Derrick Widmark’s Diablo Burger. But to my mind, the one place that raised the foodie bar the most in this wings-and-things college town, the place that made you say, “Holy Sh**! I can’t believe I’m eating something this beautiful, this sophisticated and this delicious in Flagstaff,” is — or more accurately, was — Coppa Café, which closed Sunday, June 9, after dinner service. If you never visited, here’s the back story, just to torment you with show you what you’ve missed.

Chef-owners Brian Konefal and his wife Paola Fioravanti — she took the sweet side, he the savory — opened this tiny but charming European-style café, housed in an unprepossessing strip mall, in 2011, turning out everything from drippy, decadent Reuben sandwiches and fancy French fries to luscious steak tartare, elegant lobster and scallop crudo, signature coppa di testa (spicy pork terrine, akin to head cheese) and fabulous house-made pastas, often augmented with smoked and cured egg yolk grated over the top like cheese. For dessert, there was Paola’s crunchy-edge cannales or dainty bouchon, rose-flavored sorbet or classic fruit tarts, winking jewel-like from her well-stocked pastry case. Many of the couple’s dishes fell into the “best I’ve ever had” category. Meanwhile, Brian was leading the charge in the local foraging movement, incorporating wild mushrooms, chokecherries, juniper, agave flowers and the like into dishes that became the state’s most eloquent expression of Arizona Cuisine.

When Paola was diagnosed with cancer in 2016, Brian ran the place on his own, keeping the restaurant in full swing while also giving the woman he loved the support she needed until her death a few months ago. He very recently found a buyer for the restaurant and sold it, wisely retaining the name. And that’s the telling detail that gives me hope – he wanted to keep the Coppa Café name.

Some friends and I went up to Flag this past Friday for a last supper at Coppa. The experience was crazy and chaotic, the place packed with people who, like us, wanted one last taste of Brian’s phenomenal food. We did it up: charcuterie, two tartares (one beef, one cactus), house-made bresaola, offal ravioli, the fattiest, most flavorful cassoulet on the planet and an ethereal spring risotto made with fresh peas and tinted a lovely pale green. We wanted to eat the entire menu but begged off for being full, a silly excuse I regret now as I think about the carbonara and beef bourguignon.

But here’s the thing: Brian is not done — not by a long shot. He needs time to rest, reflect and grieve, so he’s scaling way back for now, committing to little more than a series of summer pop-up dinners and more involvement with his build-your-own-burger food truck called Square Root Burger, parked in downtown Flagstaff. He will no doubt look for a new Coppa location, which could be in downtown Flagstaff or could be in Phoenix, where he would undoubtedly draw a larger, more sophisticated audience.

For my part, I want him to stay in Flagstaff, the place that best reflects who he is, but I understand the need to drop the whole Sisyphus narrative and lead a happy, productive, successful life that is not based on struggle. Whatever Brian decides to do and wherever he decides to go, he will be successful. This I know. He is an inspiring example of what a human being should be — loyal, loving, hard-working, passionate, eager to learn and fierce in his convictions. I admire him more than I can say, and I wish him all the best, all the very best this world can give him. So keep an eye out. He’ll be back, which will be great news for us all.