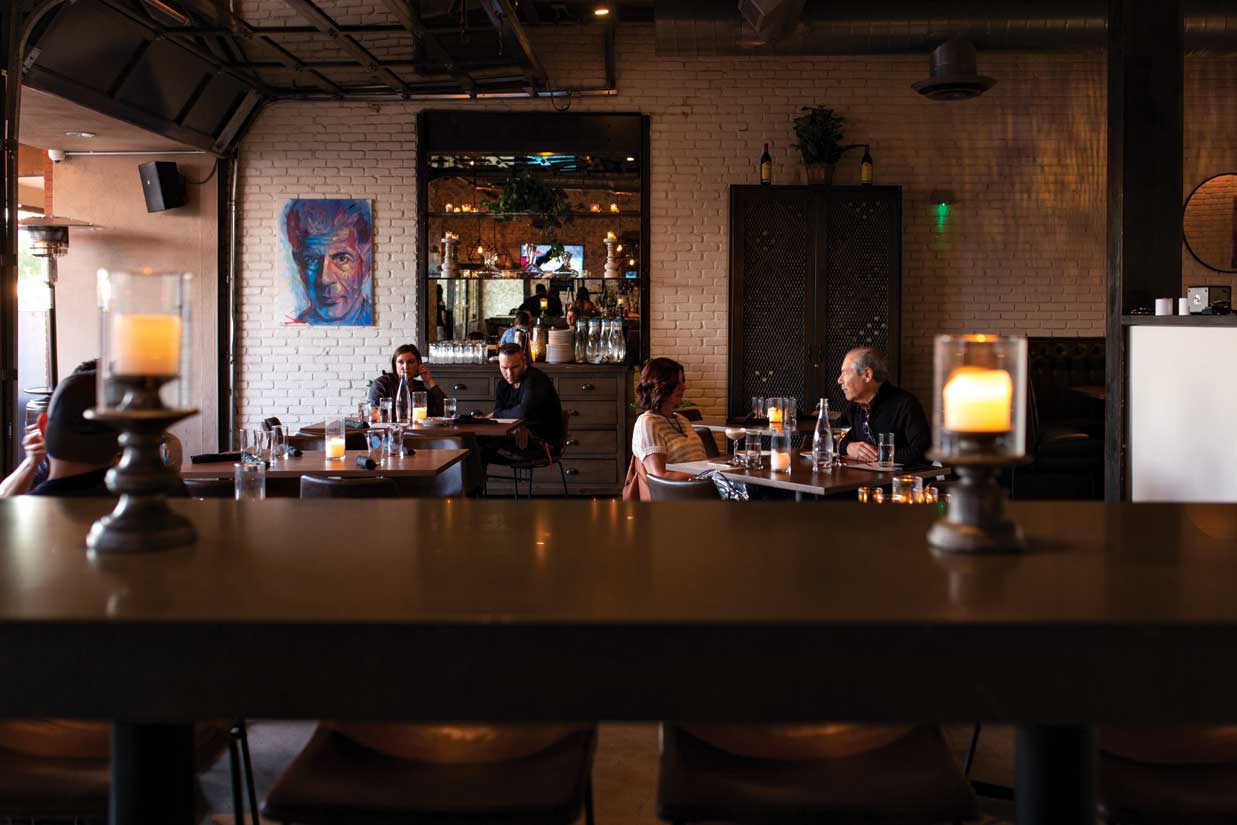 Charles Barber is a happy man – and a busy one. He opened his new restaurant, Aftermath, in Uptown Phoenix just before Thanksgiving, and eight days before that, he married the woman of his dreams. The average person would find the overlap of two major life events a tad stressful, but Barber took it all in stride, texting me this message around that time: “I’ve waited my whole life for this moment professionally and personally. The universe was listening.” How sweet and inspiring is that?

I’m going to assume his life as a newlywed is aces and assure you that despite the glitches associated with opening a new restaurant during a never-ending pandemic – staffing, supply chain – Aftermath is slaying. Clearly, it’s already been embraced by the neighborhood as an upscale, everyday hangout, much like Hush Public House in North Scottsdale. Of course, that’s not surprising, given that Barber and Dom Ruggiero, chef-owner of Hush, were founding partners in that enterprise for its first two years.

For this project, Barber, who worked behind the bar at Matt Carter’s Zinc Bistro for 16 years, has installed longtime friend and fellow Zinc alum David Bowman as his executive chef. After nine years of turning out Carter’s modern French food, Bowman is slinging approachable New American eats, gussied up and rife with global accents.

The recently reworked menu now features a straight shot of dishes, nothing categorized as shareable starters or entrées, a methodology that encourages grazing rather than linear dining. Jumbo shrimp, sourced from locally owned The Wild Shrimp Co., makes a perfect small plate/starter, nonetheless. They rest atop nutty sunchoke purée, drizzled with basil vinaigrette, and sparked with cascabel chile crisps. It’s an unusual combo, but a brilliant one.

Also great as a starter or side: charred Brussels sprouts and crunchy farro, dotted with mild quark (fresh cheese) and studded with sweet sultanas. Topped with a chive-dotted sunny side up egg, it’s flavorful, textural and fun.

Grill-blackened broccolini, its natural sweetness offset by the forest-floor earthiness of maitake mushrooms, is buried in a flurry of smoked Parmesan. Among and beneath the vegetables are two sauces: cashew cream and funky-sweet fish sauce caramel, Vietnam’s umami-loaded nuoc mau, traditionally used as a simmering liquid. This is a “wow” dish, the sexiest broccolini I’ve ever had.

Soup and salad are well-represented here, too, the first a velvety corn bisque, sweet yet smoky from the grill. Studded with burnt onion and shishito peppers, the bowl is rimmed with a diving board-size hunk of toasted bread, shellacked with crunchy, broiler-blackened ’nduja (spicy, spreadable cured pork). I love it.

Meanwhile, a splayed-out wedge of romaine, still attached to its stem, is strewn with apples, dried grapes and spicy candied walnuts. It’s a classic right down to the pungent blue cheese dressing. There’s also an excellent beet salad, creamy with Boursin cheese, crunchy with rye crisps.

Entrées are just as strong. Bowman riffs on old-school roulade (rolled-up meat with a filling inside), stuffing Jidori chicken thighs with sweet sausage and dates and placing them atop nubbly Marsh Hen Mill red corn grits. A creamy berm of paprikash sauce, ruddy with paprika, is there for the swishing, while dill-flecked tomato ragout, brightened with crunchy fennel, cuts through the dish’s richness. Clearly, Bowman’s tutelage under Carter has served him well. He’s a master of balance and contrast.

More evidence of that is found in his use of green harissa, which lends muted heat to big, beefy, bone-in short ribs, an earthy, elemental dish supported by black lentils and sweet nibs of parsnip. Pickled shallots give the dish a bit of onion-y sweetness and acidity. Undercooked mafaldine pasta is the only miss of the evening, although its Mediterranean components – Niçoise olives, piquillo peppers, blistered tomato – are lovely.

On one early visit, I did find some weak links, including a yellowtail collar (hamachi kama) that was undercooked and off-puttingly stringy; and a limp, overcooked mac and cheese (dubbed the After ‘Mac’) that was gushing with cheese but lacking in flavor. A grass-fed burger, oozing with Velveeta, was similarly underwhelming. At the time, I fretted that the kitchen equated cooking with smothering everything in cheese. Now that I have a better understanding of Bowman’s chops and creativity, I view those dishes as aberrations in need of tweaking.

And while I’m offering constructive criticism, I should add that the big white wall that faces the entrance lends an unfinished feeling to an otherwise sophisticated room designed around white bricks, open ductwork and garage doors. Love the comfy chairs, hate the dungeon-like lighting. Once the sun goes down, Bowman’s beautiful food is almost indiscernible in the gloom, and that’s a shame.

But the takeaway here should not be my kvetching about a bare wall or a burger, but rather my delight that a newly opened restaurant is doing such a fabulous job so much of the time. Barber has every reason to continue being blissfully happy and insanely busy. 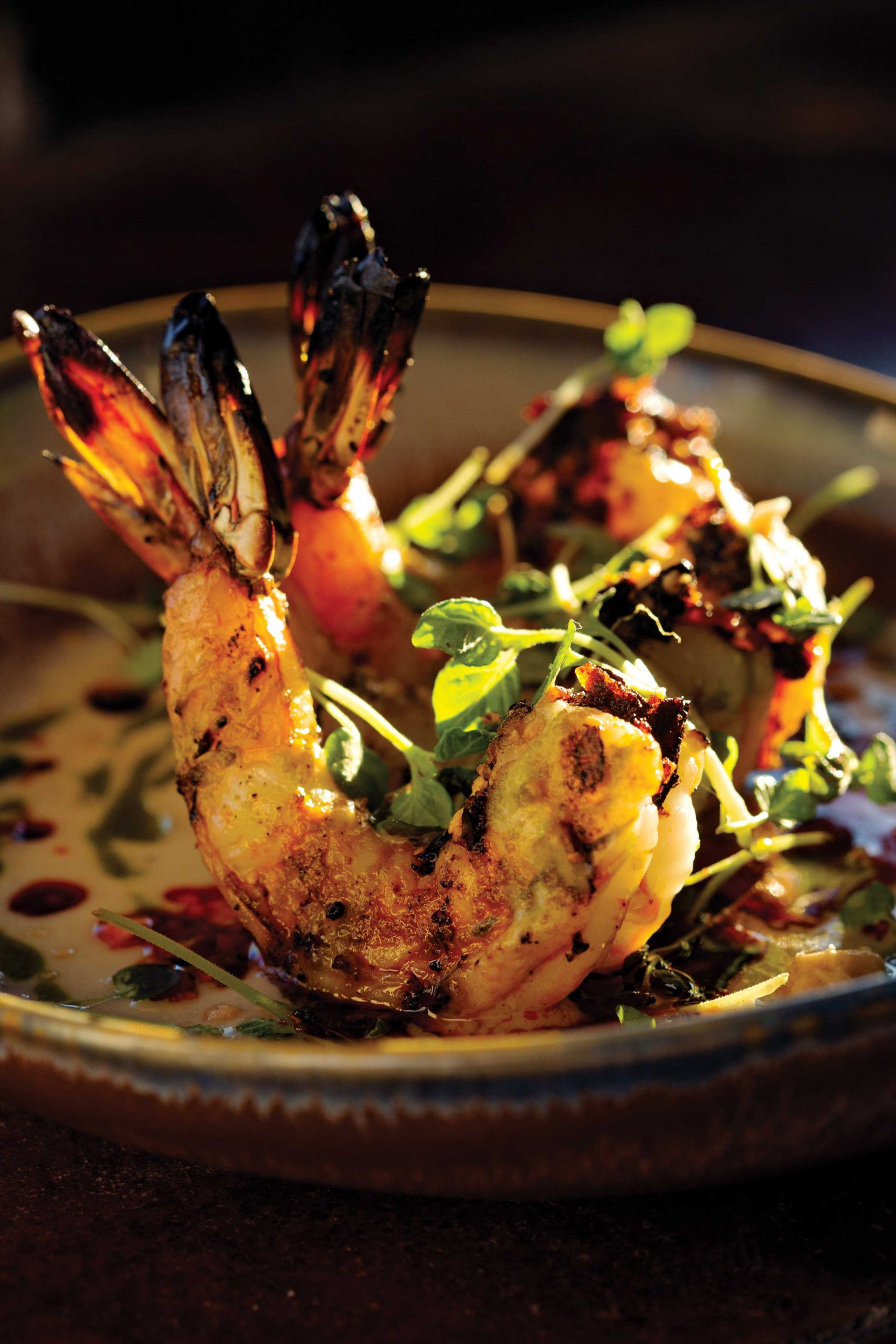 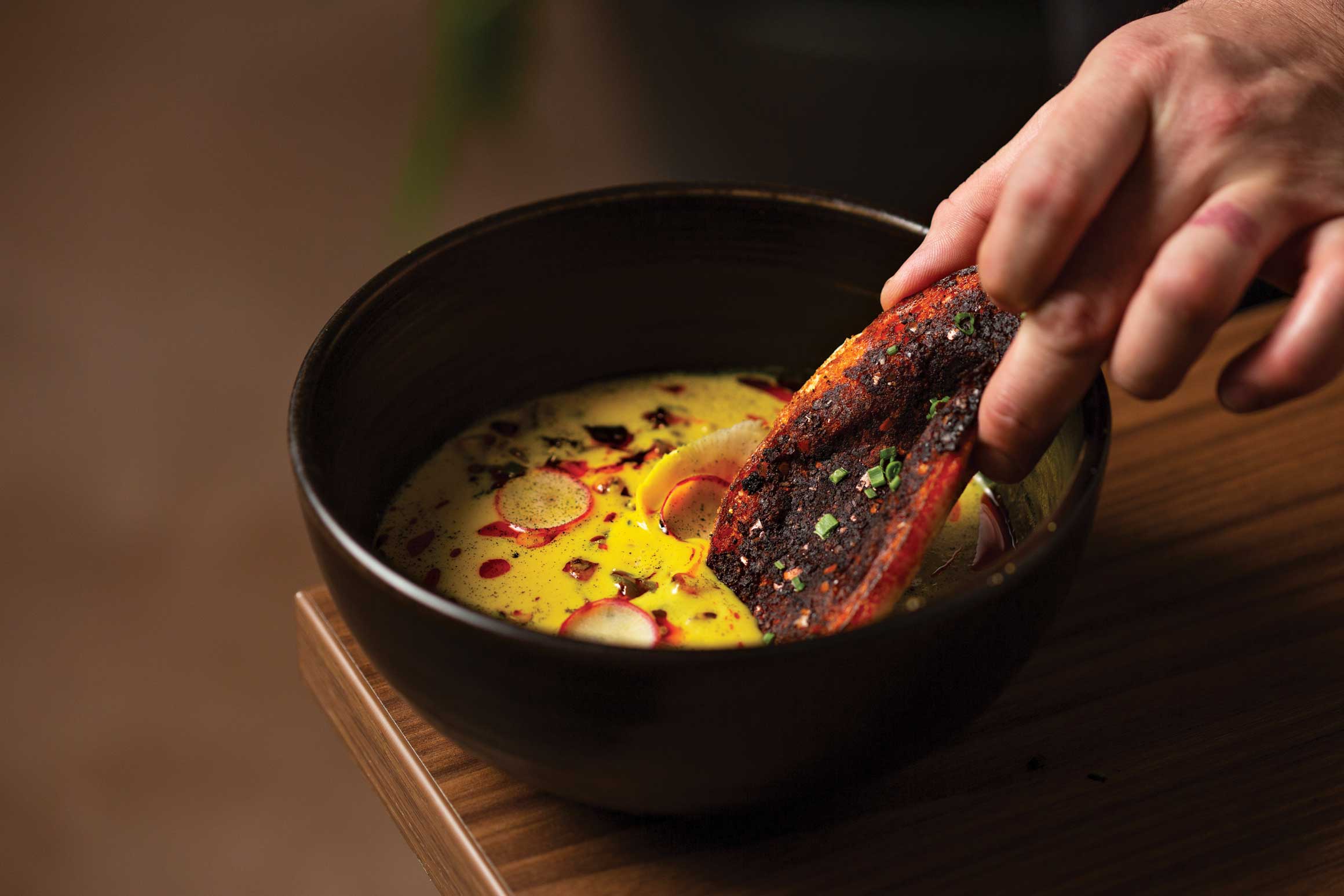 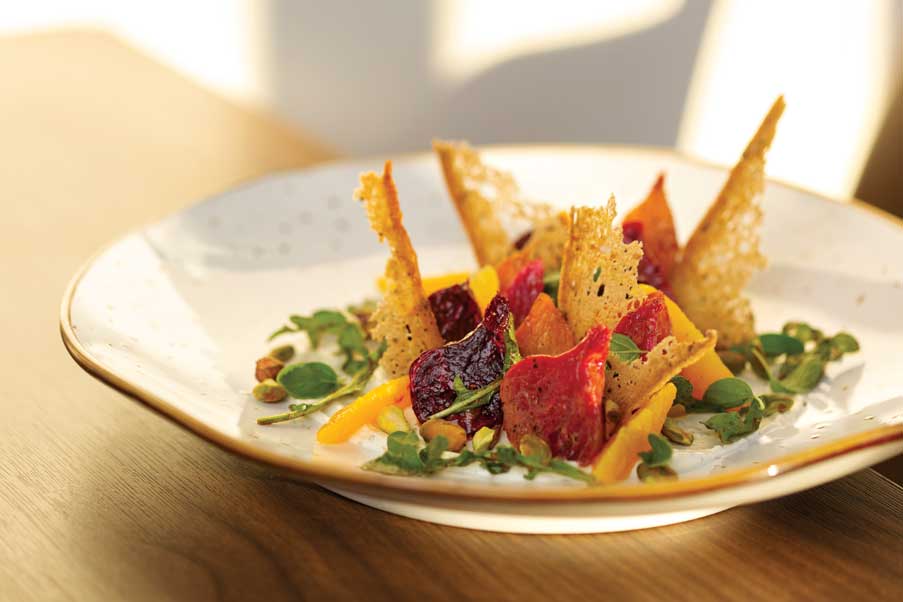 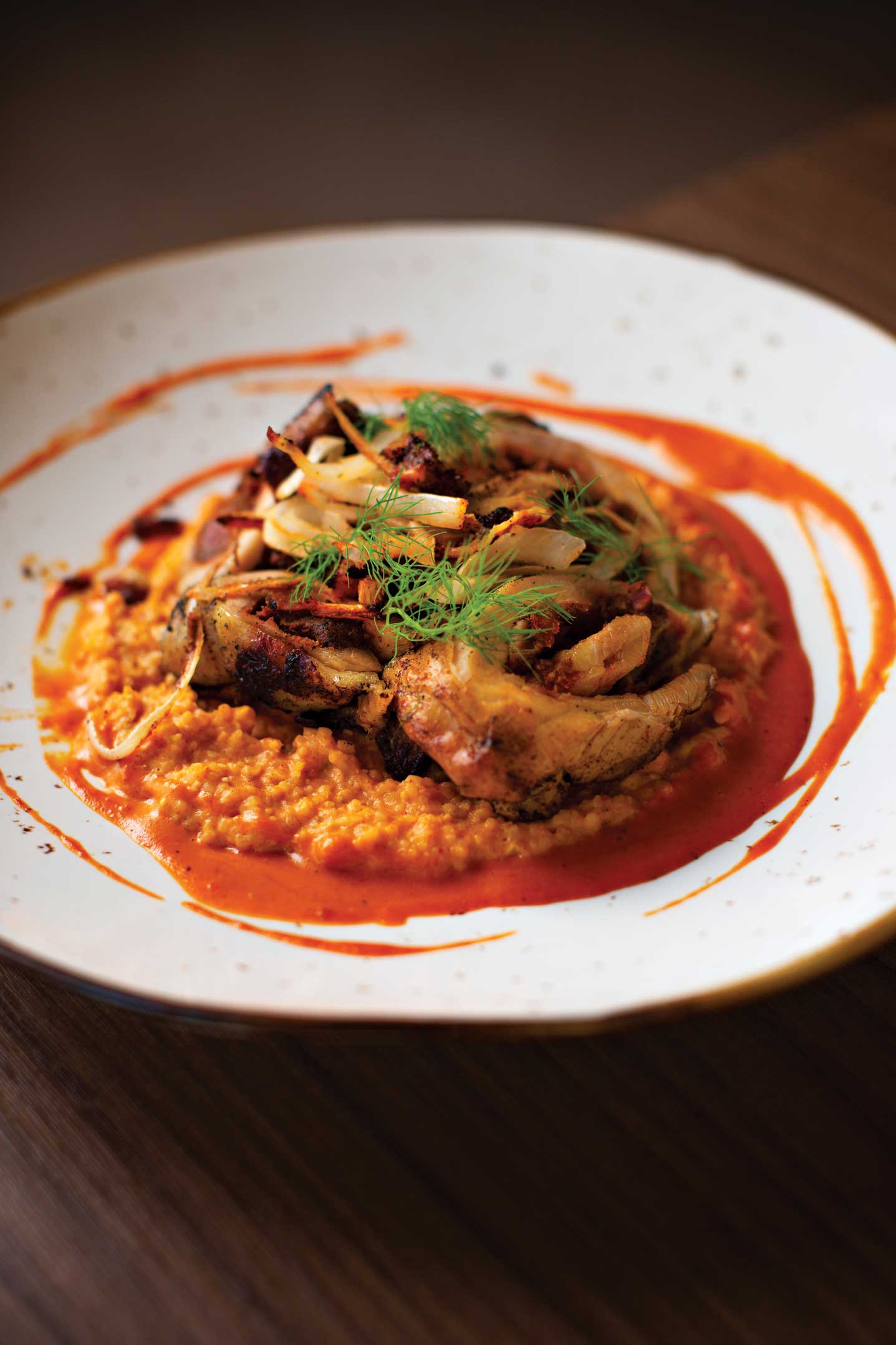 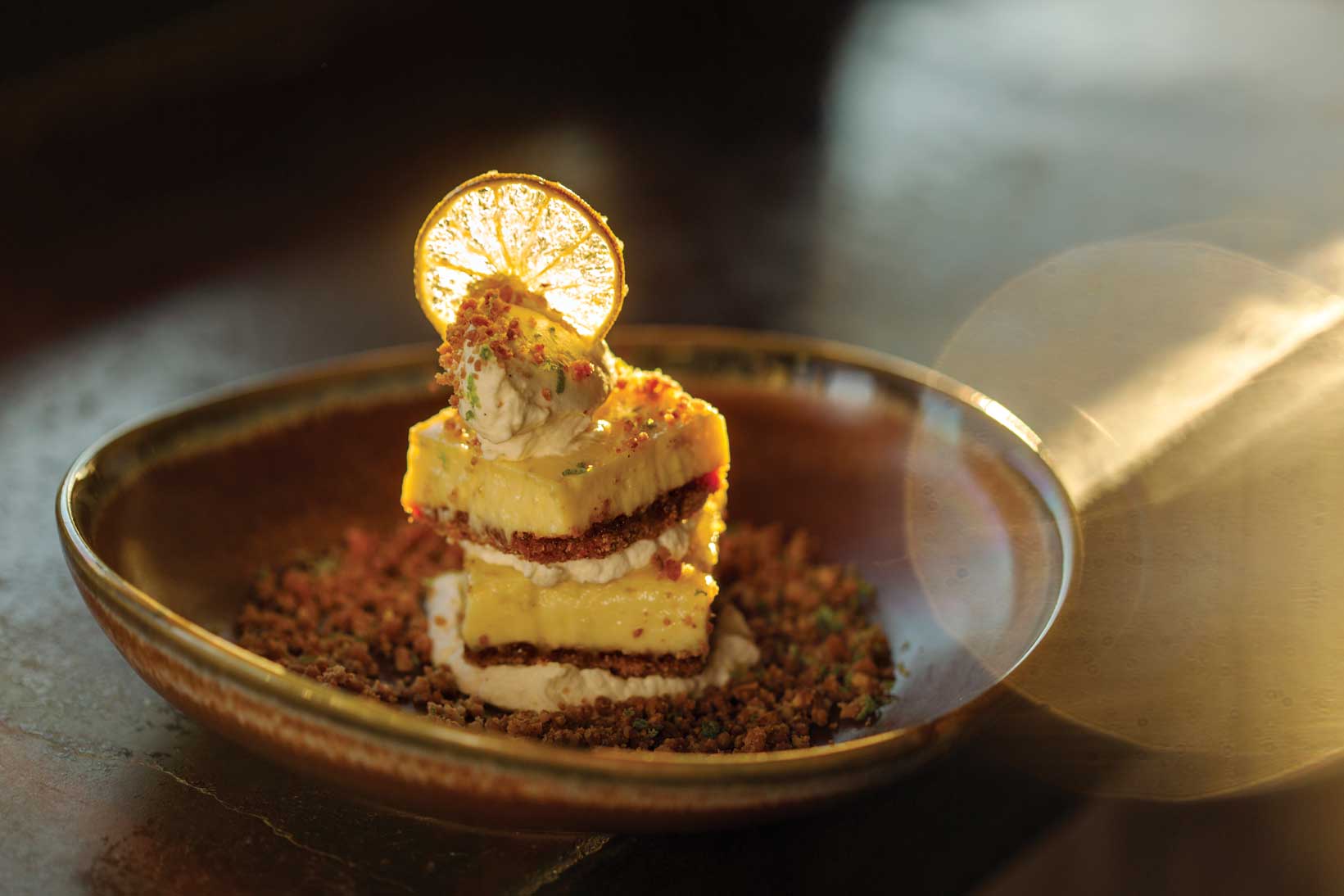