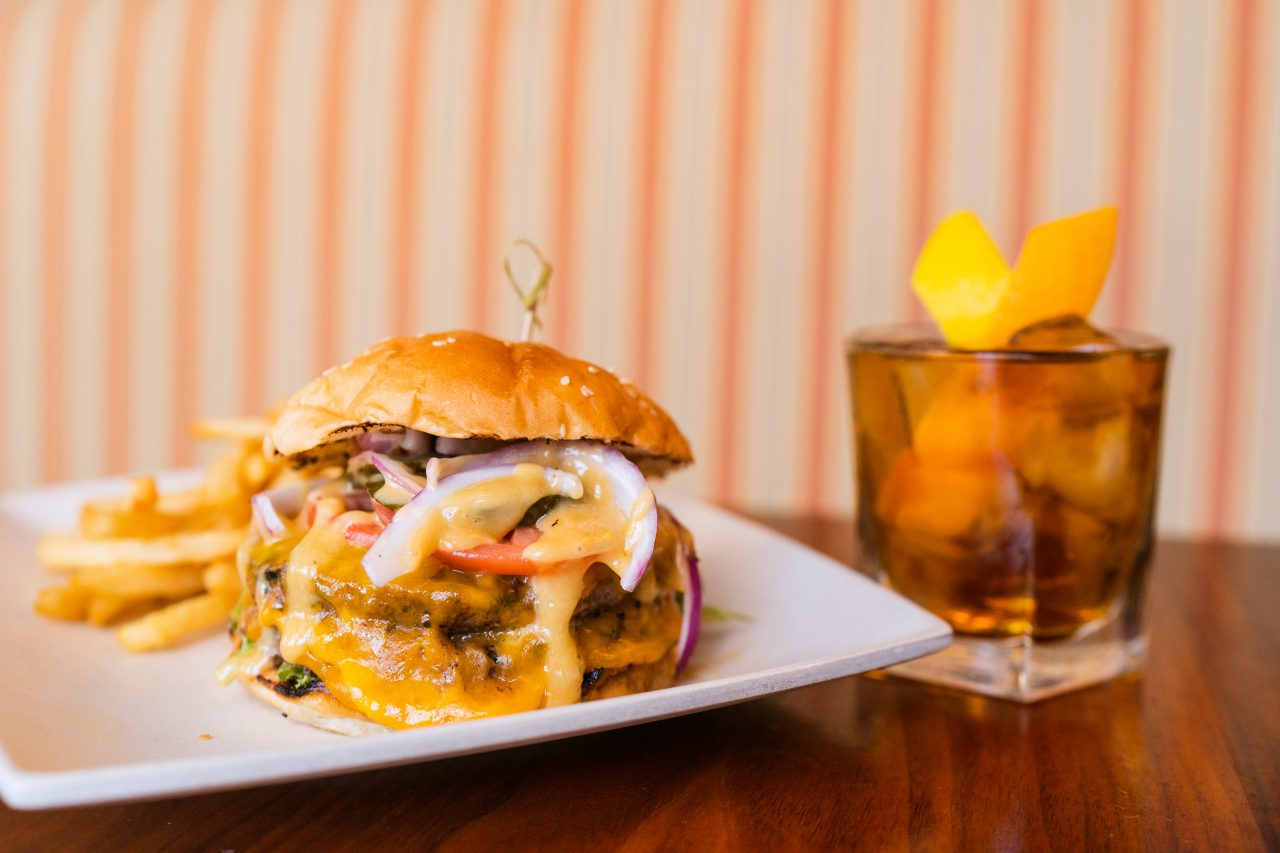 Both Aioli Gourmet Burgers and Bitter & Twisted Cocktail Parlour are all about being innovative and ever evolving. The two award-winning concepts are now joining forces to bring an expanded menu of elevated street food to Downtown Phoenix.

Aioli’s executive chef, Vicktor Velez, has taken the reins as the head of B & T’s in-house food program, introducing a gourmet, globally influenced menu that pairs perfectly with the cocktails at the lauded Downtown lounge.

Bitter & Twisted owner Ross Simon says the partnership was a side effect of the pandemic. Because of rising costs and staffing struggles, the bar needed a way to make the food program feasible post-COVID. “This was a smarter way to do it,” he says.

The new food offerings are inspired by Velez’s travels throughout Southeast Asia, particularly Japan, Hong Kong and the Philippines. The latter locale has a distinct influence on his cooking, as the Filipino chef started following his family’s recipes at a young age.

Velez’s menu also reflects Aioli’s commitment to fresh, seasonal produce and locally sourced products. He pays special attention to taste, texture, aroma and color in his dishes. Velez says he is “totally in love” with two of the new dishes in particular: charred octopus and pork belly.

The charred octopus is a twist on surf and turf, he says, featuring braised Spanish octopus paired with chorizo in an aromatic Moroccan broth perched on cheesy grits, sprinkled with Southwestern-inspired vegetables such as charred corn, roasted black beans and blistered cherry tomatoes and, finally, adorned with cotija cheese and cilantro.

“It’s very much a fusion of where we are now with Southwestern cuisine and what I grew up with,” Velez says.

The pork belly is citrus-cured and roasted, placed on a bed of mascarpone and Parmesan polenta, glazed with a pomegranate and sherry gastrique and garnished with fresh pomegranate seeds, roasted pepitas and arugula dressed in olive oil.

“It’s super simple. I learned from my mentors that you don’t want to be super fussy with food,” Velez says. “The simpler the better and the more you add, the more you take away.”

The classic Aioli Burger will also be available on the menu, which Velez says is elegant yet approachable. He believes it will introduce Bitter & Twisted fans to Aioli and vice versa. “We have a separate following in the Valley and Bitter & Twisted being the legend that it is here in Phoenix, it’s a really great opportunity for our clientele to check out and see how cool Bitter & Twisted is,” he says.

Bitter & Twisted devotees might remember the bar’s popular ramen and dumpling burgers, which were conceived several years ago and have since been removed from the menu. Simon hopes diners will discover fresh favorites on the new menu. True to the nature of the two businesses, that menu will continue to evolve.

Simon says working with Velez is a win-win in that the menu plays to the chef’s skillset, talent and vision and gives guests a great food option so they can enjoy more than one cocktail.

“Food is a very important part of the bar, and it basically slows the absorption of alcohol, meaning guests can enjoy a couple cocktails as opposed to just one,” he explains. “That’s the essence of having food and a quality food program at that.”

Simon gave Velez a lot of freedom in his role, allowing him to develop the ideas and recipes and occasionally providing constructive critiques on how Downtown diners would receive it.

“It’s a case of feedback, compromise and getting the best dish for what the client base expects, and to work with them in the best way possible to produce a quality product,” Simon says.

Velez is eager for the busy season to return. “I’m excited to be able to learn and grow while putting out amazing food and giving great service at Bitter & Twisted,” he says. “I’m also looking forward to being able to have this opportunity of a creative outlet and share my passion and my ability with food and my love for food with anybody and everybody I can cook for.”