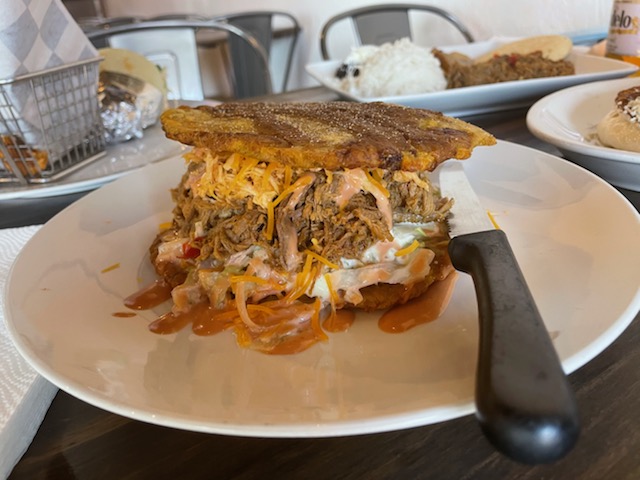 Que Chevere — the brick-and-mortar Venezuelan restaurant in downtown Mesa that evolved from a popular food truck of the same name — has been around almost a year, and I marvel that I never found it before. Maybe I’ll just blame that little lapse on the pandemic. Owned and operated by husband-and-wife team Orvid Cutler and Maria Fernanda (he manages, she cooks), it’s a plainly furnished but charming little spot whose good vibes come from our friendly server and a soundtrack that runs to Latin trap and reggaeton.

As my friend and I sat there sipping Mexican beer and waiting for our food to come, I already knew I liked the place. Post-lunch, I can safely say I love it. The food is fresh, interesting, and plentiful, not to mention affordable, given that most items hover around 10 or 12 bucks.

Venezuela is probably best known for its arepas, hand-held doughy things that encase a filling of some sort. Because corn is king in this part of the world, they’re made from corn— not wheat flour and not the corn-based masa of Mexico but rather a finely ground, pre-cooked corn flour (yellow or white) that lends them earthy sweetness. My buddy and I order the arepa reina pepiada, a faintly corny-tasting classic whose name (“curvy queen” in Spanish) pays tribute to Susana Dujim, the Venezuelan beauty queen who won Miss World in the ’50s. It’s a light, fresh-tasting filling of marinated, shredded chicken breast mixed with mayo-based cilantro sauce and smashed avocado. Think cool chicken salad, mild and tasty on a hot day with crispy tostones (plantain chips) on the side ($10).

Cachapa with queso de mano (literally “hand-made cheese”) is another Venezuelan specialty involving corn, but this time it’s a crispy-edged, cinnamon-scented pancake, oozing with a white, stretchy cheese similar to mozzarella. On the top, a generous sprinkle of soft, grated cheese that our waitress simply calls “Venezuelan.” Who knows? Let’s just call it delicious.

Funny thing: Pabellon Criollo, the national dish of Venezuela, is reminiscent of Ropa Vieja, the national dish of Cuba — combining a pile of juicy shredded beef (although this version could be juicier) sided with white rice, thick, cheese-strewn black beans and sweet, soft plantains. Nothing on the plate is as hot as it should be, but everything tastes pretty darned good just the same ($12). But the hands-down best thing on the menu (so far, at least) is the gloriously messy Que Chevere patacon, a behemoth of a sandwich in which crispy plantains (squashed together and browned until crisp on the griddle) pinch hit for bread. Yes, that is correct: plantains for bread. The best bread substitute you will ever eat although if you’re trying to get away from carbs, this will not be your answer. Piled high with shredded beef and chicken, melted cheddar, lettuce and dripping orange sauce (vaguely labeled “fry sauce”), this thing is an embarrassment to eat, but you will not care. It. Is. Ridiculous ($10).

There’s dessert too, a rum-infused flan I’d love to try if my shorts were fitting a little looser. I can’t wait to go back to Que Chevere, which means “how cool!” in Spanish slang. I gotta agree.