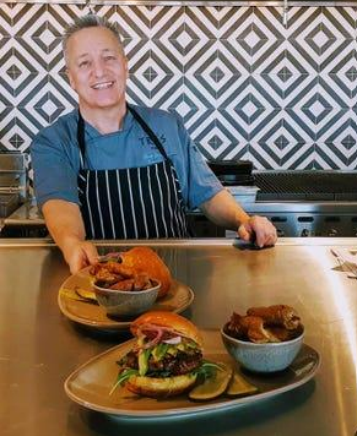 Merkin Vineyards in Old Town Scottsdale’s new executive chef, Steve Zimmerman, has been busy developing new dishes for the winery’s tasting room menu. Zimmerman, who started a few months ago, was previously the executive chef at Widewaters Hotels in Tempe (Tres Kitchen and Bar) and the Sheraton Crescent Hotel in Phoenix. He brings more than 25 years of culinary experience to the farm-to-table, vine-to-glass tasting room.

Having spent the bulk of his career in resort and hotel kitchens, Zimmerman had to adjust to working in a very tight space with only two induction burners and a small oven. “The kitchen is smaller than what I’m used to, but I’m proud of the product we’re putting out,” he says.

But that’s all about to change because the kitchen is undergoing a major renovation that will double its size, Zimmerman says. The addition of a wood-fire oven and a six-burner stove will allow him to rework the menu and focus on wood-fire pizza, pasta and wine pairings. He’s also going to add paella to the menu, a dish he mastered earlier in his career.

Since his arrival, Zimmerman has been incorporating produce from the Verde Valley greenhouses, gardens and orchards farmed by the Merkin team. He also sources from local farmers and vendors whenever possible, including Crow’s Dairy and Rovey Farms. “Everything here is made from scratch, including pasta, ricotta and all our sauces,” he says.

While he doesn’t have a signature dish, he’s most proud of the smooth garlic-perfumed hummus he makes using Arizona tepary beans farmed by the Tohono O’odham tribe. “I try not to have signature dishes because I change the menus up to three times a week. We use anything that’s seasonal.”

Zimmerman looks forward to creating new dishes in the renovated kitchen. “We’re excited to expand the concept,” he says. “The wood-burning oven is going to add another element. It’s a really big change.”