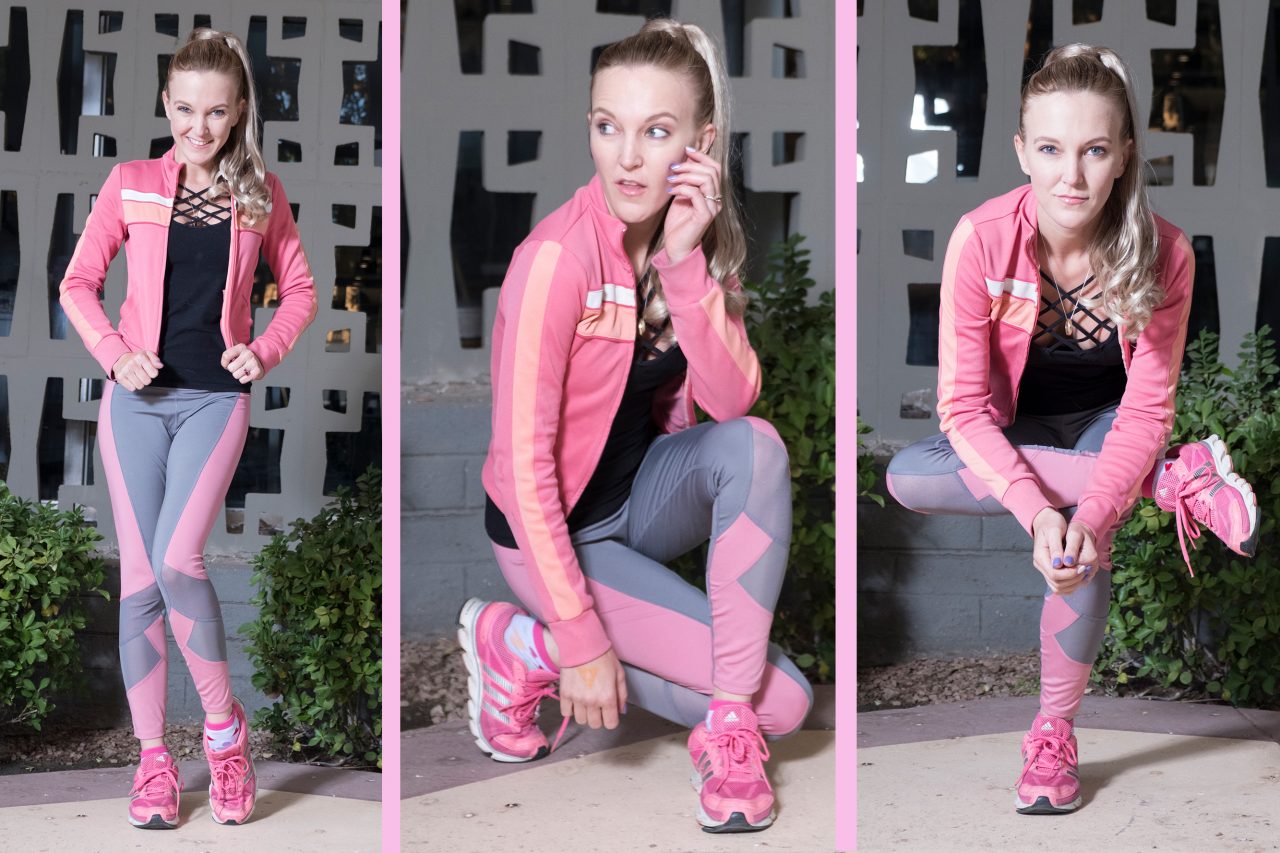 After a slew of hardknocks and tragedy, Amanda Webster was on the brink of suicide. A Linkin Park song and a lifestyle transformation later, she has renewed hope and has reclaimed her power. We sat down with the mental health advocate to discuss depression, COVID-19, anxiety and how she survived.

As an advocate for health and wellness, what do you call yourself?
I wear so many hats. Professionally, I’m a mind-body-wellness coach, which has many facets from yoga and fitness instructor to holistic nutritionist and happiness coach. I have lots of certifications. But if someone asked me to give myself a one word title, it would be survivor. I’ve survived sexual assault, suicide, addiction, abuse, bullying at a young age, major loss and depression (to name a few). I used to consider myself a victim of all of these things, but I realized that gave them power. My rapist, my ex, my bullies, the drugs, those things don’t deserve my power. I do. I reclaimed it the minute I changed how I looked at myself.

You have candidly shared that, in 2018, you were battling a deep depression that led you to the ledge of a Canadian hotel room window. Why do you think you were pushed to that point?
I never processed my trauma, so the pain was stacking. Then, in 2017, I was living alone as a single mom when I was wrongfully accused in two major legal cases, was in a car accident, was mourning the end of a serious relationship and fighting with a close friend. I turned to the only consistent coping mechanism I’d had for almost two decades: listening to Linkin Park. In this two weeks of chaos, the lead singer, Chester Bennington, lost his life to suicide. He’d sang to me while I was in the shower the night I was raped (P.S.: taking a shower is the worst thing you can do in this situation), comforted me when I lost my mom unexpectedly and was all I had when my ex isolated me from my friends. He was a symbol of hope and comfort. I thought, if a man who had everything lost his battle, what hope do I have to fight mine? I’d done drugs and self-harmed before, but it went to the extreme. Besides, I thought I’d tried everything. I’d gone to therapy for years, tried medications, read self-help books, did yoga. Nothing “fixed” me. My depression convinced me that suicide was what was best for me, my seven-year-old and the world.

What happened after that?
At that exact moment, Breaking the Habit by Linkin Park came on outside my door. I knew I couldn’t jump. I fell apart on that hotel room floor. I allowed everything inside me to come out. When I got home, I went to my therapist, determined to find happiness. She told me that happiness wasn’t possible for “someone like me” who had been diagnosed with a Serious Mental Illness (SMI). She also told me that this diagnosis was lifelong. Imagine if she’d told me that in darker times. I reached out to Diamond Dallas Page, a childhood hero turned yoga instructor and confidant, who redirected me to the power I had to change things. I realized I’d always looked to others; Chester, my parents, professionals or friends. Again, I’d relinquished my power. I told myself that I was going to give it my all for one year. I was going to do everything I could to optimize my mental health. If at the end of that year, I still felt this intense pain, I gave myself permission to jump. Not only did that year pass, but I was decertified as SMI shortly after.

We have all been impacted by the COVID-19 pandemic in some way or another. How has the pandemic affected you? What are three things you have done that has helped you maintain a healthy state of mind?
Staying active is huge for my mental health, so losing the gym was jarring. I got creative and bought rollerblades. I hadn’t bladed in a decade! The distance learning was also leaving my son frustrated and falling behind. I felt guilty, but had to accept that things weren’t the same. Me slipping into that dark place would be worse on him than playing catch-up, but I couldn’t do everything myself. I started this Skype thing where friends would talk to him and teach him about their culture, then I would do the same weekly for their kids. I also signed up for this fun math site and  got him a french tutor on ITalki, since he’s been learning it with me. Finally, taking time for myself. I have daily goals, like listening to french podcasts, or getting at least 30 minutes of physical activity, but this had to be something that didn’t fulfill higher goals. Reading has been huge. From His Holiness The Dalai Lama, Bruce Campbell, Maya Angelou and Oscar Wilde to romance novels, I forgot how much I love staring at dead trees and hallucinating. Whatever you enjoyed as a kid, you’ll still love. I promise not to judge if you play with Ninja Turtles. Heck, invite me over, I’ll be Donatello.

Part of your philosophy is being of service to others, including animals, and, you’re vegan! What are your top three vegan restaurants in the Valley?
Green Vegetarian is where I take my omnivore friends when I want to show them that I’m not eating rabbit food and missing out on life. They even host a wonderful annual Thanksliving celebration (our new tradition) with delicious vegan versions of holiday favorites. True Food Kitchen is next. I agonize choosing between my favorite dishes. Plus, they add new stuff seasonally. I celebrated two years of recovery from cocaine and self-harm there. When the manager found out, he gave me a gift card to cover a meal for my family. I’ll never forget that. My third is Seed Shack. It’s a little place tucked away in Gilbert, but they have everything from vegan macaroni to burgers to cauliflower and avocado tacos. My only lingering addictions are cauliflower and avocado! Something that makes me deliriously happy though is how most restaurants now offer real vegan options, not just salads (though, shout out to Mad Greens, I love salads too when I don’t have to make them). Even Red Robin has the Impossible patty, which you can swap out for your go-to burger. I’ve been slowly converting my partner and friends because they genuinely can’t tell the difference on this one!

You have interviewed several celebrities about their personal mental health experiences and beyond, including actor Billy Bob Thornton and Fat, Sick and Nearly Dead documentarian, Joe Cross. From these conversations, are there any helpful tidbits that have stuck with you? If so, please tell me about it (or them).
It’s crazy learning how much I have in common with these individuals. Hearing an Oscar and Golden Globe winning actor talk about what panic attacks feel like was so powerful. Jaime Bennington was particularly special for me because it gave me this strange closure surrounding my grief for his dad’s death while letting me learn what a talented and insightful individual he is. I remember him saying, “Change does happen and it’s based on yourself and not others.” That hit my core. Abby Johnson also comes to mind. I got death threats after she spoke at the RNC, but I refused to take the interview down. Everyone deserves a voice in this movement and she had an important message.  I remember her saying, “It’s not for us to tell women what their story is going to be or what they’re going to feel.” Our role is to listen, validate and help where we can based on the person’s needs, not what we think they need. Eric Bischoff’s advice, “Don’t let this nonsense (the media) control how you think or how you feel because it’s false, it’s not true, you’re being manipulated,”  really helped me navigate election season with a whole different outlook. You live an active lifestyle and eat a healthy diet as part of your mental maintenance. Do you ever allow yourself cheat days?
I don’t like the world diet, because I feel it implies a temporary thing, when I know now that this is going to be lifelong. I also don’t call them cheat days. That feels dirty. When I think of cheating, my mind conjures up some torrid love affair (what can I say, I watch too much Bold and the Beautiful). I’m not betraying myself, my health or my values in any way by deciding to take a day off from being active, doing something lower impact or deciding that I’m going to indulge in an Impossible burger with fries or something. Truthfully, I’ve gotten to the point where I don’t want to do this much because I don’t like the way my body reacts after, but a couple of times a month, I feel the need to be nostalgic, I don’t feel like preparing a meal or I feel like laying on the couch and binge watching Lucifer. It’s OK. It took me a while to give myself that permission because it can be a slippery slope. But I always get right back in the groove.

What are three tips you would give somebody struggling with depression?
Own your power and take responsibility for what you can do, but understand that whether it’s a friend, support group, therapist or life coach, family or heck, even me, connecting with others who understand and sharing your story is invaluable. Next, the “it gets better” adage isn’t a full sentence. It gets better when you make it better. Change doesn’t happen without action and, while the depression might tell you that you’ve tried everything, there’s always a next step. Try again. Try something different. Try a different way. Try asking for help. Keep trying until you figure it out. Take one step in the right direction. Even one step is forward movement. Lastly, don’t listen to the depression. It’s like the bully that pushes you around on the playground, only the bully is in your head. It  tells you that you’re worthless, that the world and everyone you love would be better off without you, that they wouldn’t care. I care. Every time I read about another suicide, my heart breaks. I see the lost potential. I see the pain that person felt and the pain they’re transferring to the world. I’ll spend the rest of my life letting every person who is struggling, who feels invisible, know that I see them, I see their pain and I care.

How do people learn more about what you do?
My website (amandawebsterhealth.com) is the best place. You can learn more about my story and join my free challenge, where I’m going to be teaching the changes I implemented in my life, which I call the 5 Puzzle Pieces of Happiness, to go from being on that ledge to being happier than I’ve ever been. It involves making pie and dancing, so who could say no? Plus, I’m giving away free copies of my workbook, How to Improve Your Productivity and Boost Your Happiness. I know so many people are struggling emotionally, physically and financially and I genuinely just want everyone to have access to resources right now to improve their mental health. I’m also on YouTube and Instagram, @amandawebsterhealth, so I encourage everyone to come say hello and join the conversation to help me end the stigma around mental health. That’s how we move forward.