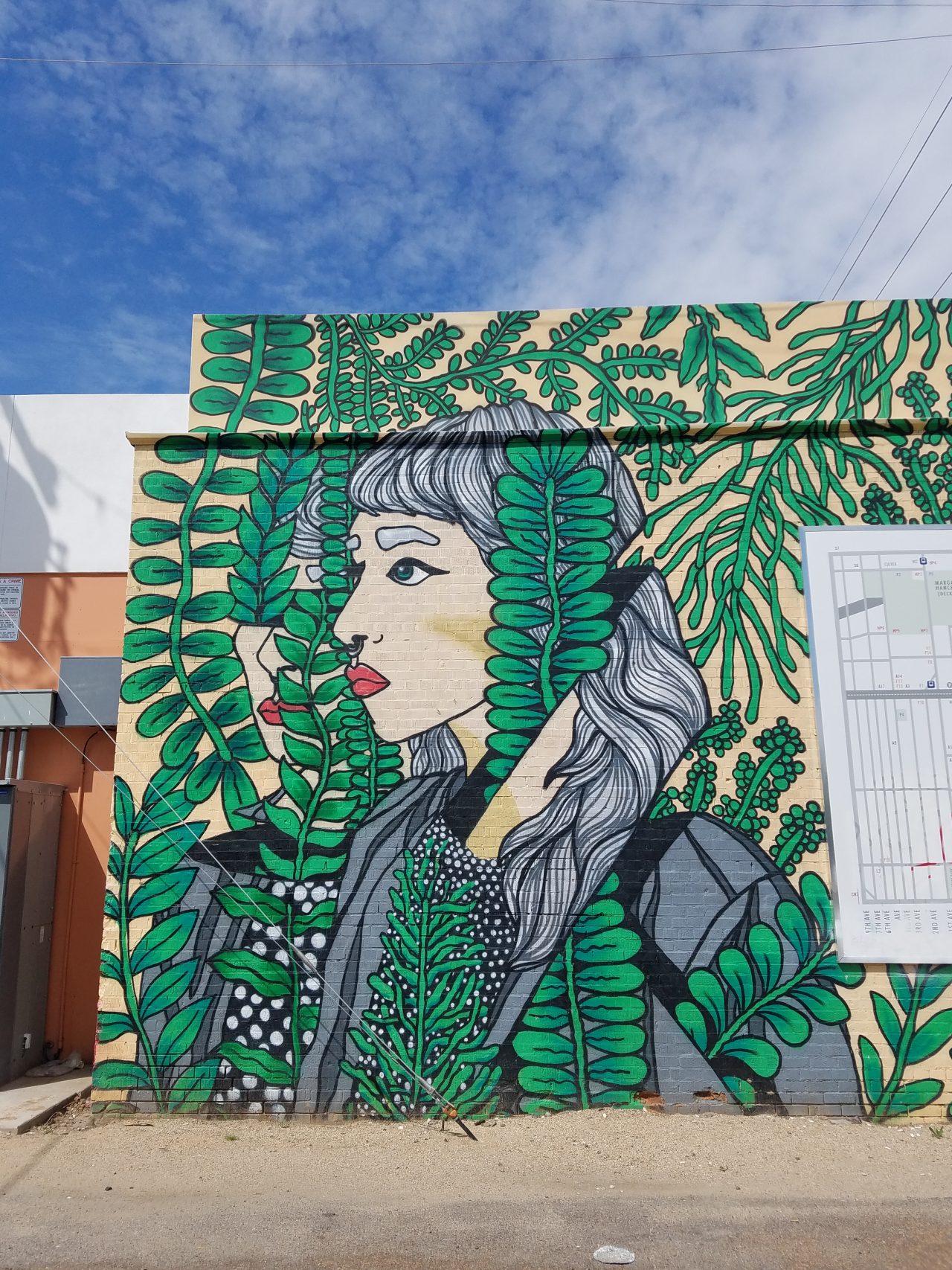 While art museums and galleries may be temporarily closed, you can still get your art fix on Roosevelt Row by exploring the vast amount of street art on view. These days, pedestrians are few and far between, so you’ll be able to safely explore murals like these while responsibly social distancing.

Not Another Bird Mural in Phoenix by Kayla Newnam
As you head east on Roosevelt, you won’t be able to miss Kayla Newnam’s playful peacock mural. This burst of color livens up the sides of a public parking garage. Kayla is known for her use of bright colors and patterns in her designs.

1 ½ Street Mural
Turn south just past First Street and you’ll discover an alleyway of art comprised of works by several artists such as Volar (whose leopard is featured above), Isaac Caruso, Lucinda Hinojos, Tato Caraveo, Jane Goat, Nyla Lee and more. The artists’ combined works morphed the sketchy alley into an Instagram photo destination. The project resulted from a collaboration between The Churchill (the open-air food court that backs up to the alley), Arizona Public Service and Phoenix Center for the Arts.

La Masa by Clyde Graffiti
Turn north on Second Street and you will spot Clyde Graffiti’s La Musa mural looming high on the side of Hance Park Condos, just past Portland Street. Clyde specializes in large scale murals. The traveler portrayed in this one is meant to inspire taking new routes and observing your surroundings.

Untitled mural at The Blocks of Roosevelt Row by Tyson Krank
While various construction sites east of Third Street are currently blocking some Roosevelt Row staples, you can still see beauties like Tyson Krank’s. Tyson leaves most of his work untitled, preferring not to define the meaning in words, letting the visual speak for itself.

Los Suns by Lalo Cota
There is a fun mural by Lalo Cota of a group of Phoenix Suns basketball players on the side of Carly’s Bistro at Second Street. Cota is a longtime Downtown resident and has been creating art for more than 30 years. He is inspired by Mexican folklore and his murals, like this one, often feature skeletons.

Theodore by Tato Caraveo
You can see Theodore Roosevelt himself, painted by Tato Caraveo, on the front of The Theodore Craft Beer Bar near First Street. Caraveo has several works throughout Roosevelt Row and the Grand Avenue Arts District. He has a surrealist style, giving the characters he portrays elongated, graceful features.