The buck is prodigious, the bang scant at this much-hyped, Michelin-starred Chicago import.

If there’s one thing that Maple & Ash, the white-hot new steakhouse at the Scottsdale Waterfront, wants you to know, it’s this: The sexy Chicago transplant is not your grandpa’s steakhouse, or even your dear old dad’s. In fact, the classic steakhouse trope – masculine décor, stodgily formal vibe – doesn’t survive past the foyer at this scene-y Scottsdale dining palace. With its labyrinth of streamlined gray rooms embellished with gold trim and glittering light fixtures, each filled with thumping lounge music, the restaurant conjures a distinctly casual brand of opulence – i.e. the kind that allows for both the Brooks Brothers set and bros in backward baseball caps.

But I shouldn’t be surprised. 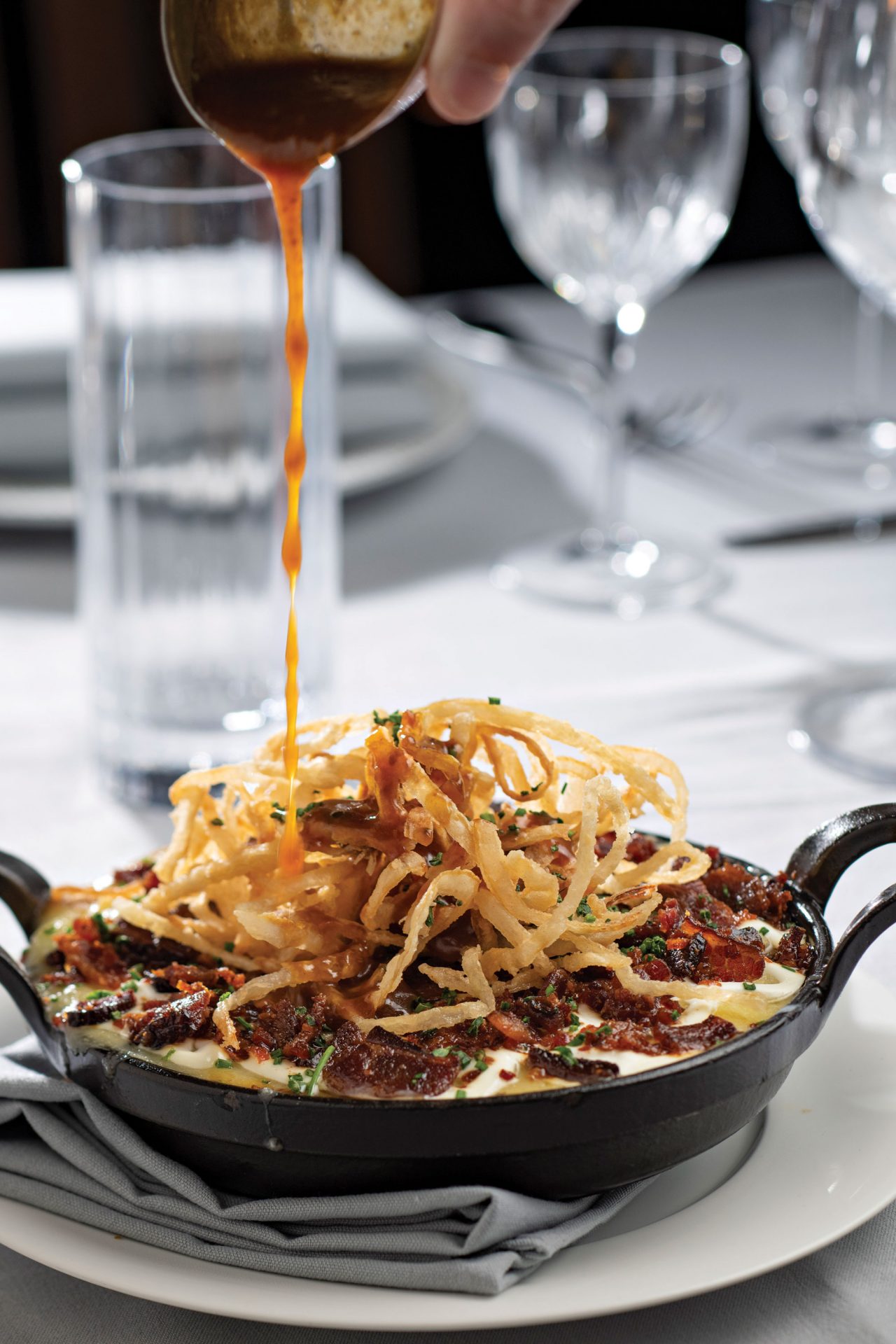 After all, the original Maple & Ash – so named for its use of those particular hardwoods on the grill – quickly gained cool-kid status when it opened in Chicago’s Gold Coast neighborhood back in 2015, both for its food and irreverent flourishes. Among them: offering an omakase-like tasting menu called “I Don’t Give a F*@K” (surely a first for a Michelin-starred restaurant) and peppering its massive wine list with teenage bon mots like “sick” and “dope.”

I can’t shake the feeling that hipster posturing is what Maple & Ash is all about, an impression that deepens as the meal progresses.

Then again, the place has been slammed with customers since debuting in August. Maybe they simply haven’t gotten a handle on the details. Whatever the problem, I’m not impressed, and I’ve spent a boatload of money to reach this conclusion – a depressing conclusion, given that executive chef Sean Currid, a Valley native with serious cooking chops and a CV that includes Michael’s at the Citadel, Mary Elaine’s and Sanctuary, is running the show. 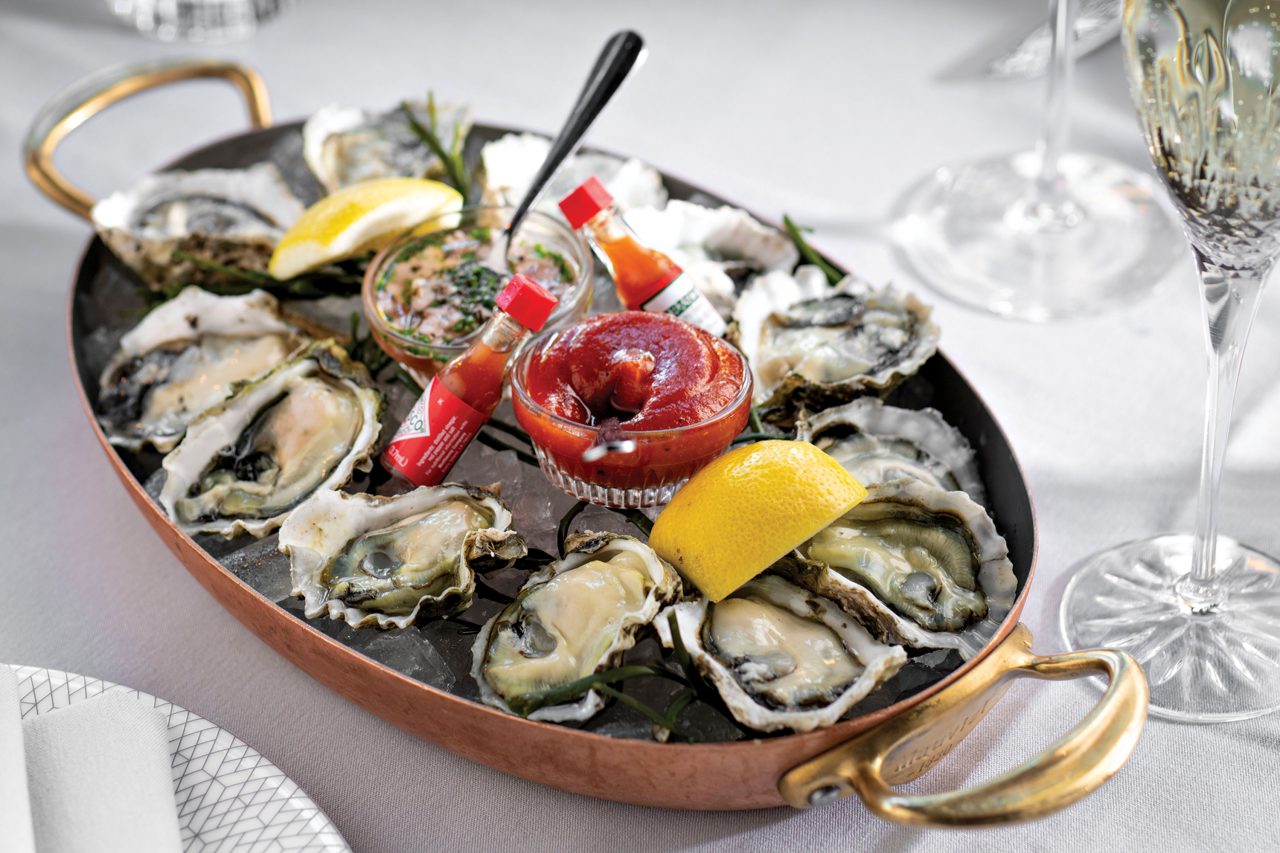 Oysters on the half shell; Photography by Rob Ballard

The meal gets off to a wonderfully welcoming start, however, with a complimentary gin-based cocktail, served in a dainty stemmed glass, and plates of nibbles, including salami, breakfast radishes with butter and fresh mint, candied pecans and crusty house-made bread. We dither over the wine list while munching, and are not impressed: It’s lengthy enough, but offers precious few decent bottles for less than $200.

To begin, we order a dozen plump, creamy Kusshi oysters on the half shell, accompanied by agreeably sharp Champagne mignonette and horseradish-zippy cocktail sauce. The oysters themselves are lovely, but they’ve been poorly shucked and a handful of them contain bits of shell. Another three or four have been carelessly tipped on their sides, causing the oyster liquor to spill out.

This wouldn’t happen at, say, Roka Akor down the street, where Kusshis are a tad pricier but handled with care.

Kaluga caviar, a farm-raised freshwater variety said to capture the essence of critically endangered (and therefore illegal) Beluga caviar, arrives in its 1-ounce tin on a footed silver caviar dish atop a silver tray rimmed with tiny bowls of sour cream, hard-cooked egg yolk, crêpe-like blini, and minced egg white and potato gaufrettes (think waffle chips). Although I love the la-di-da presentation, most of the blini are so undercooked they’re still wet at the center. Meanwhile, the glossy, greenish-brown caviar is mild-tasting and more soft-textured than the brinier osetra (farm-raised and similarly priced) that bursts in the mouth at Binkley’s. 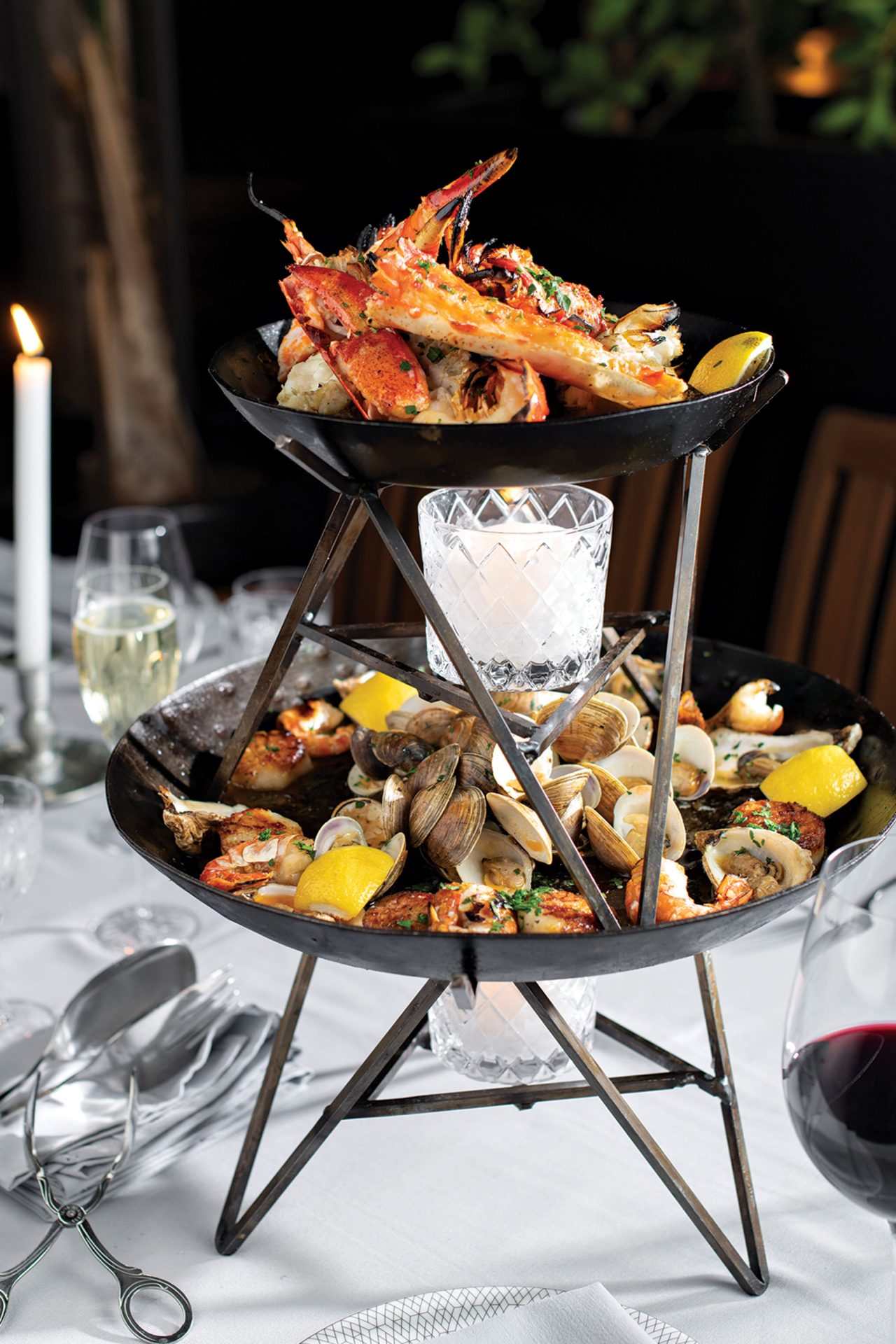 M&A’s oven-roasted spin on the chilled seafood tower served all over town involves garlic butter, chile oil and a 900-degree coal-fired oven. Our conscientious server, who must have thought we’d gone off the ordering deep end, brought out a single order instead of the tower-for-two we thought we’d ordered, so there were only two shrimp, two clams, two oysters, one scallop and one lobster tail. As it turns out, we’re not pining for more: too much salt, faintly mushy lobster meat, nothing as luscious as we’d anticipated. Our server also brings us a half-order of truffle-scented ricotta agnolotti, which amounts to five pasta “pillows of love,” according to the menu. They’re decent, but nowhere near as swoon-worthy as any pasta dish at Andreoli Italian Grocer or Tratto, where you’d get more for less.

Good thing we’ve eaten enough to tide us over for a while because our steaks – a 40-ounce porterhouse, cooked directly in the coals and called The Eisenhower and a special off-menu ribeye cap – are no-shows for nearly an hour.

When they do arrive, they’re not sizzling or even hot. Worse, The Eisenhower doesn’t boast the gorgeous crust you’d expect from a slab of meat cooked directly in the coals. Worse still, it presents a slightly off, gamey flavor that might be attributed to dry-aging, which the menu doesn’t mention for this particular cut. I’ve eaten dry-aged steaks at plenty of steakhouses over the years, but I’ve never had one that struck me as “funky” before, but maybe I’ve forgotten this acquired taste.

The loose-textured ribeye cap, splashed with signature “beefed-up butter” (which includes beef drippings, garlic, wine and herbs) is vastly superior: more char, less chew, but I find myself longing for a straightforward crusty-edged ribeye from good old Don & Charlie’s (defunct, alas) at less than half the price.

What a disaster! $1,100 spent on utter mediocrity. Money that would have bought us electrifying meals – with wine pairings, mind you – at Binkley’s, Nobuo or ShinBay, with a couple of Benjamins left over.

My intent was to find the dishes that set Maple & Ash apart from its steakhouse neighbors – Bourbon & Bones, Mastro’s City Hall Steakhouse, Ocean 44, J&G Steakhouse, all a bone’s throw away – and instead I found what not to order and why not to go there.

At least I don’t have far to look for a better experience. 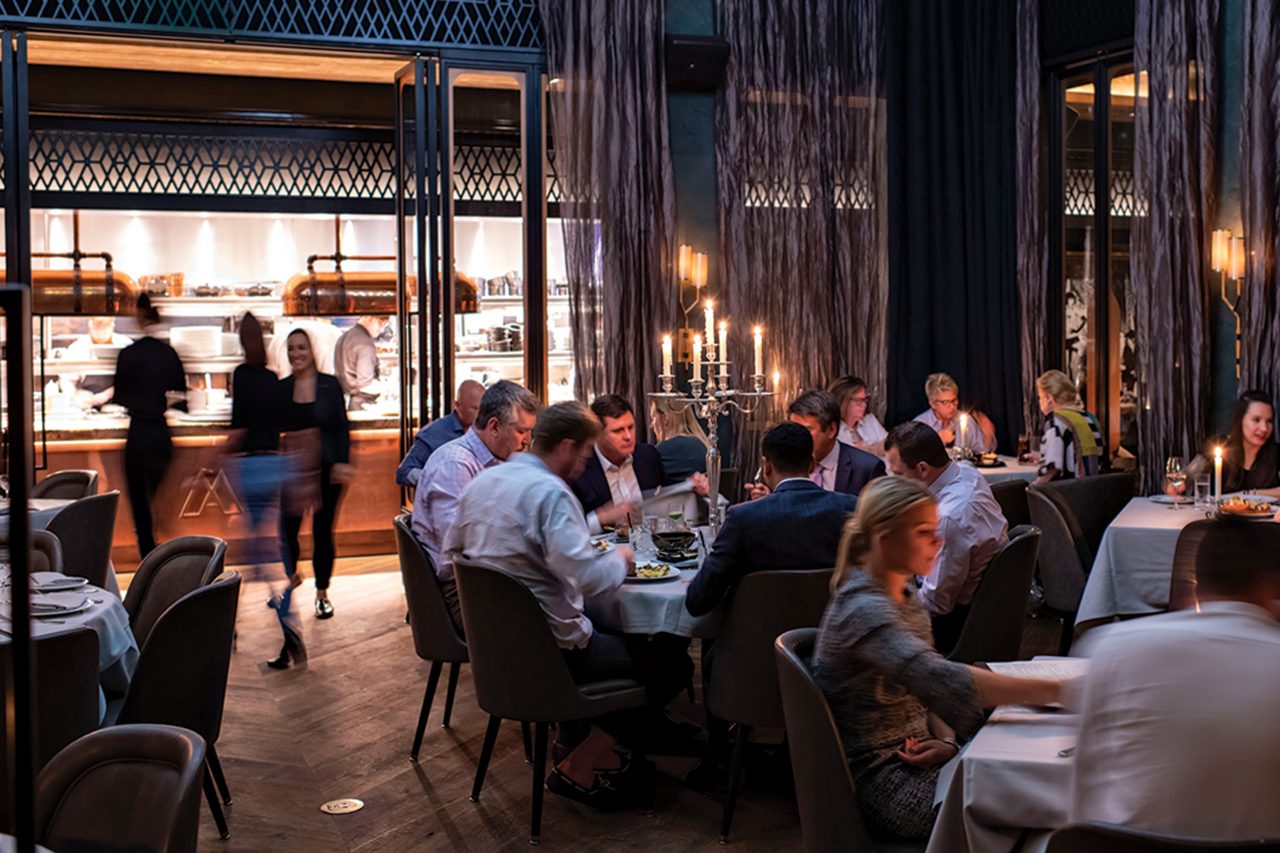 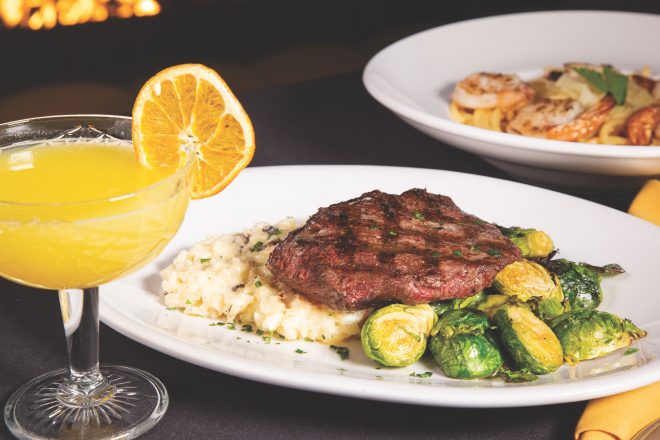 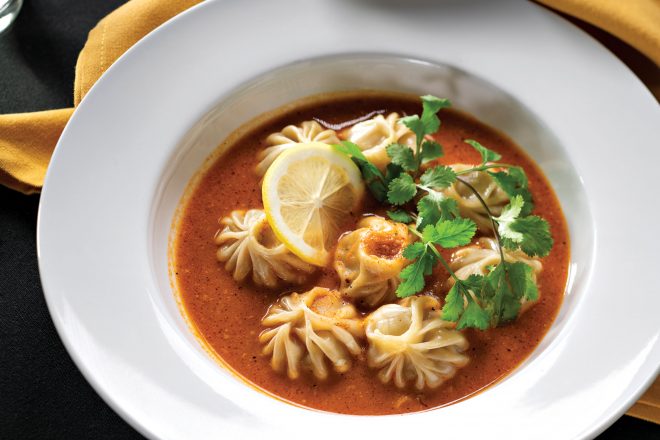