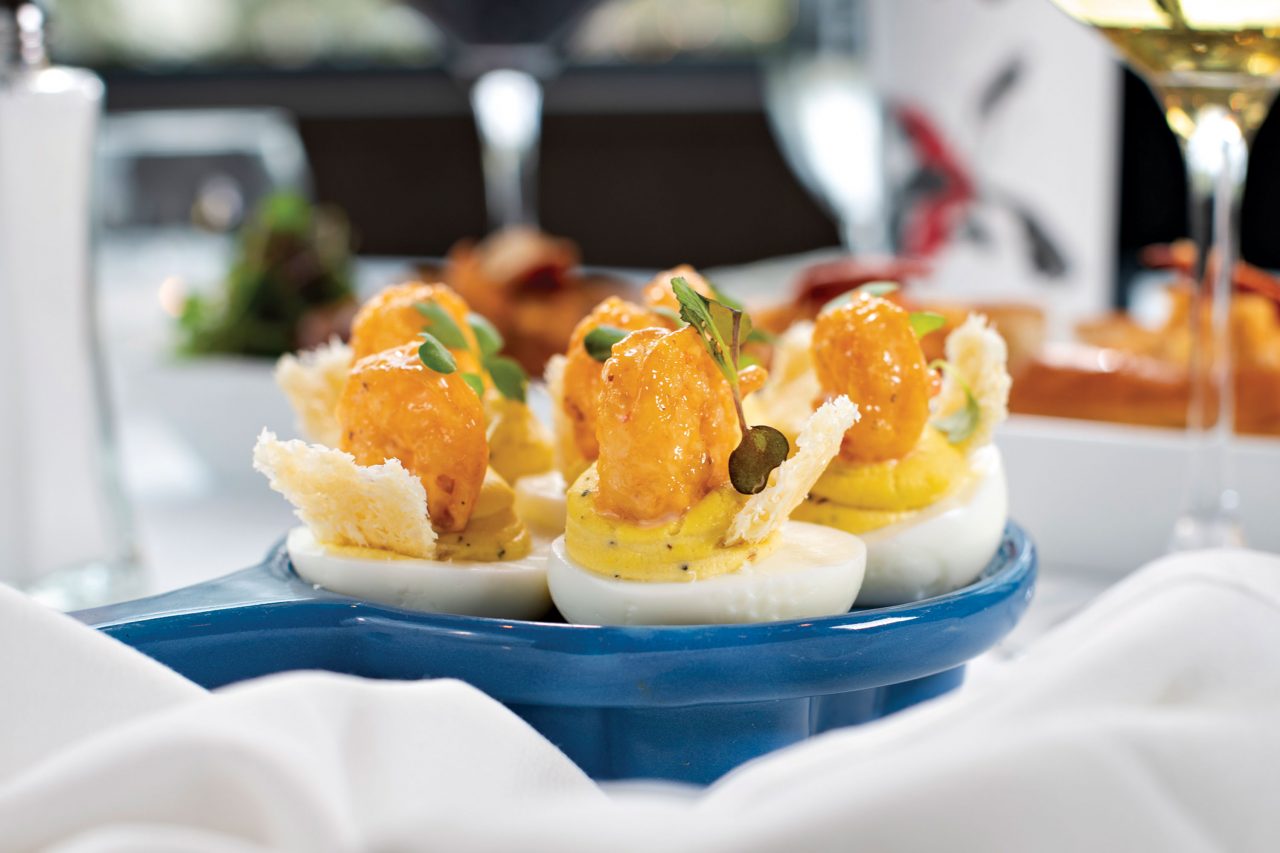 The Mastro family’s glitzy return to seafood oozes glamour, but not all the dishes sparkle.

I’m sitting at a high-top with three friends in the swank, glass-walled lounge at Ocean 44, the hardest place to get a reservation in all of Scottsdale, and life is tasting pretty sweet. Built from the ground up over the carcass of the old Harkins Camelview 5 near Scottsdale Fashion Square, the stunning Judi Testani-designed space thrums with energy, the voices and laughter of the well-dressed and well-fixed rolling in waves across the room. Meanwhile, solicitous servers ferry platters of steak and seafood to patrons who can drop $250 on a Tuesday night dinner for two without batting an eye. The razzle-dazzle of it all makes me a little heady – or is it this finger-bowl-size pour of good wine?

Of course, distinctive décor, pitch-perfect service and a menu rife with beautifully presented, breathtakingly expensive dishes are hallmarks of Valley restaurateur Dennis Mastro, who along with his sons Michael and Jeff and his partner Scott Troilo, founded Mastro’s Steakhouse back in 1999, elevating the paradigm for this meat-loving cowboy town. The partners grew to six restaurants in Arizona and California, including seafood-centric Ocean Club in Kierland Commons, before selling the whole shebang in 2007. Four years later, they re-grouped to become Prime Steak Concepts, opening Dominick’s Steakhouse – a quieter, classier iteration of Mastro’s, long considered a meat market and cougar haunt – in Scottsdale Quarter, followed by Steak 44 (named for its 44th Street location) in 2014 and two other steak restaurants (both called Steak 48 for Arizona’s 48th state status) in Houston and Chicago.

Now, with the opening of Ocean 44, a name that for dorky me conjures the inherent coolness of George Clooney and Brad Pitt in Ocean’s 11, PSC has gotten back into the seafood game as well. This means re-creating elements of Ocean Club (remember the seafood tower?) while giving Mastro’s and Ocean Club chef-alums Siegfried Hohaus and Marc Lupino the go-ahead to dream up plenty of sexy new dishes to prove that no one rests on their laurels in this restaurant empire. A gleaming glass-enclosed kitchen and a sparkling 18-foot raw bar, aglow in the restaurant’s dim foyer, set the elegant, exclusive tone for the evening – as do expertly made cocktails, a reserve wine list for high-rollers and extensive selections of bourbon, scotch, tequila and cognac. Even the bread course is impressive: piping hot rolls so buttery and flaky they refute the notion that man cannot live by bread alone. 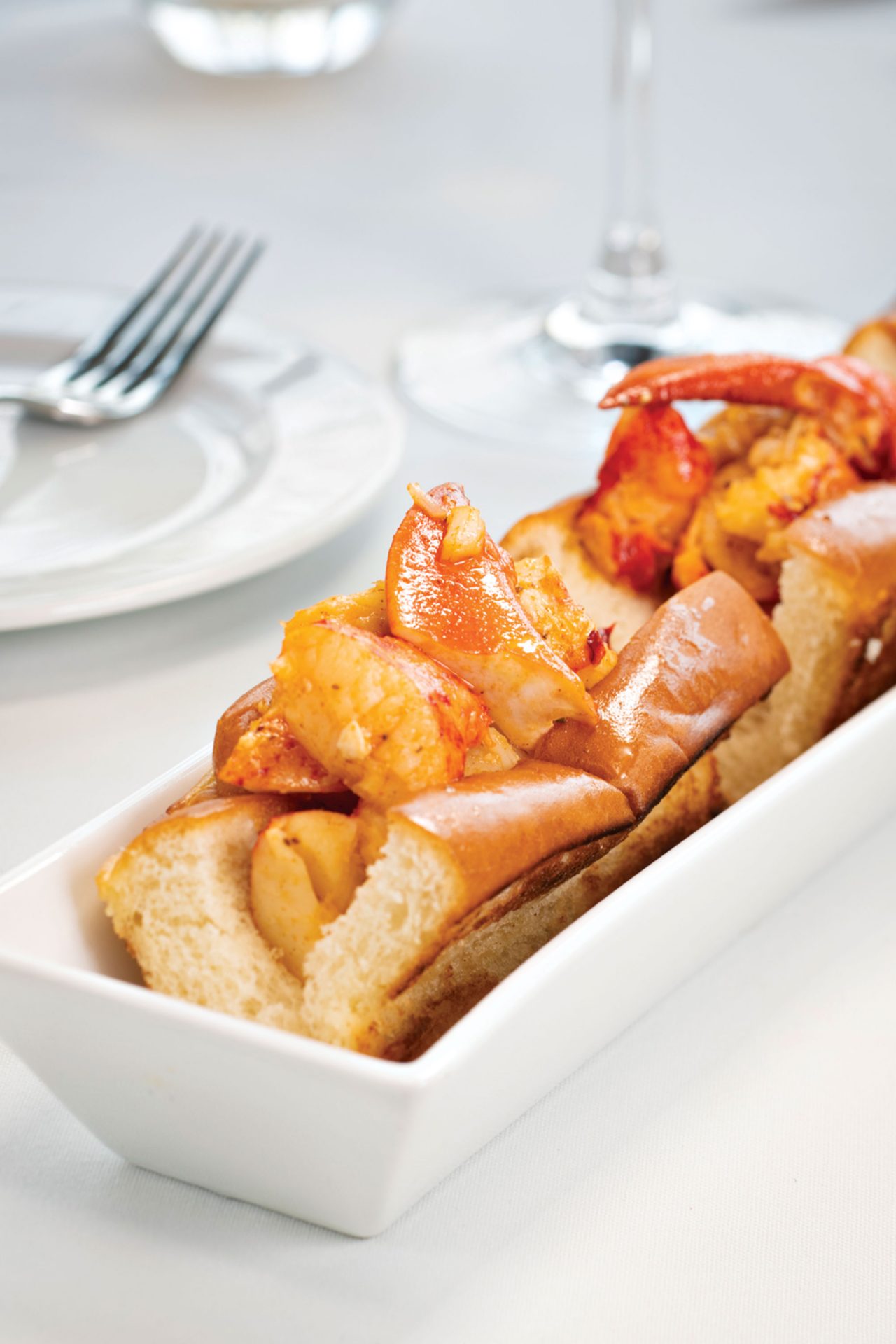 On an early visit, I lingered on the appetizer menu, where I fell in love with a handful of simply prepared but pleasing starters: crispy shrimp cloaked in the merest wisp of batter and sparked with sticky-sweet Thai chile pepper; slabs of juicy heirloom tomato, heaped with avocado and sweet king crab, oily swabs of basil purée provided for savory counterpoint; and a half-dozen mustardy deviled eggs, each topped with one crispy shrimp and a Parmesan tuile, familiar ingredients fused in a fun way. Maine lobster escargots, which are not escargots at all but rather bits of lobster meat tucked into the holes of an escargots dish, ladled with creamy Mornay sauce and dabbed with caviar, are a rich but ultimately bland assemblage I probably wouldn’t order again.

The best of the appetizer lot is a trio of diminutive lobster rolls, each buttery, grilled roll stuffed with glistening, butter-poached Maine lobster and a sprinkle of chives. I could eat them every day. 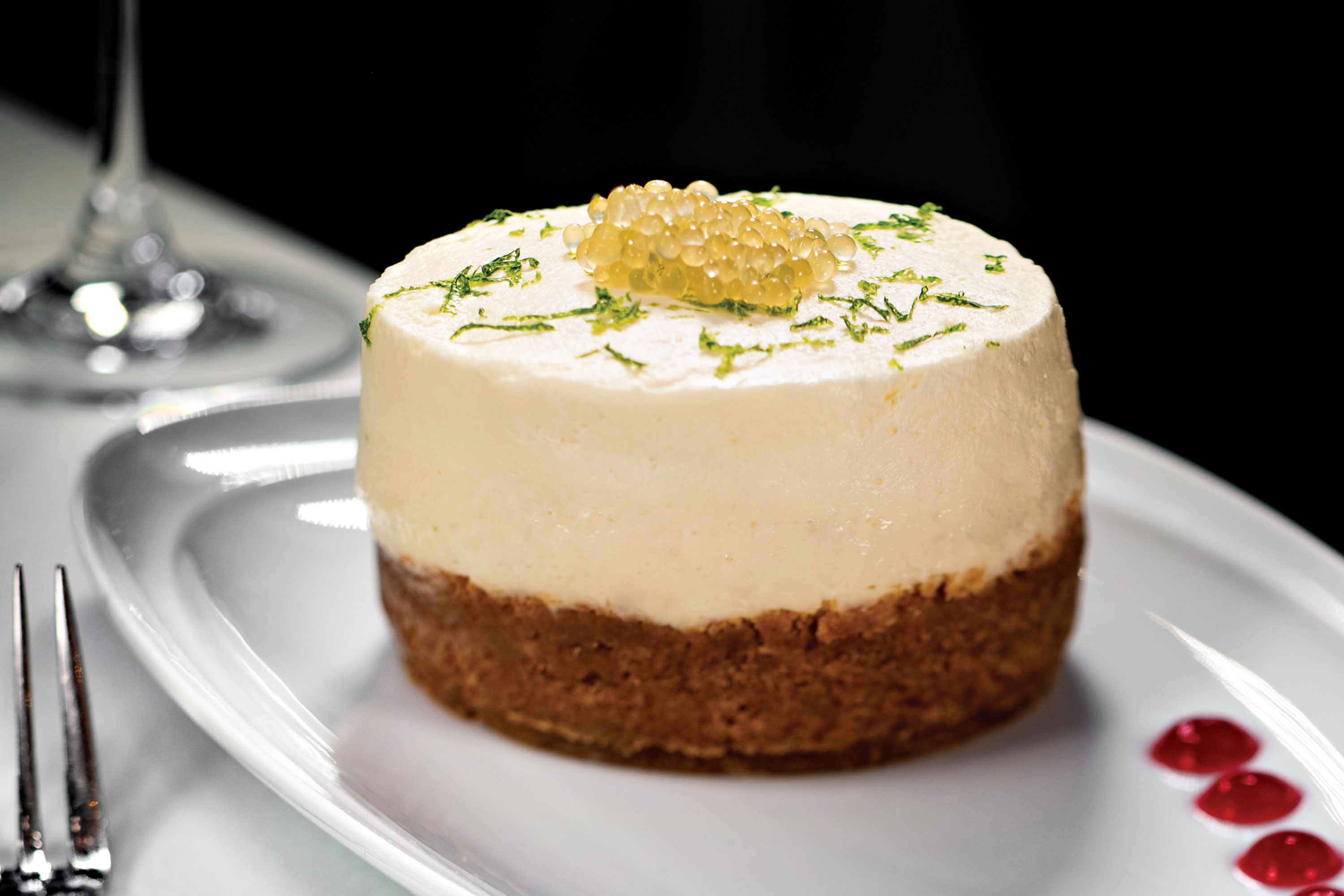 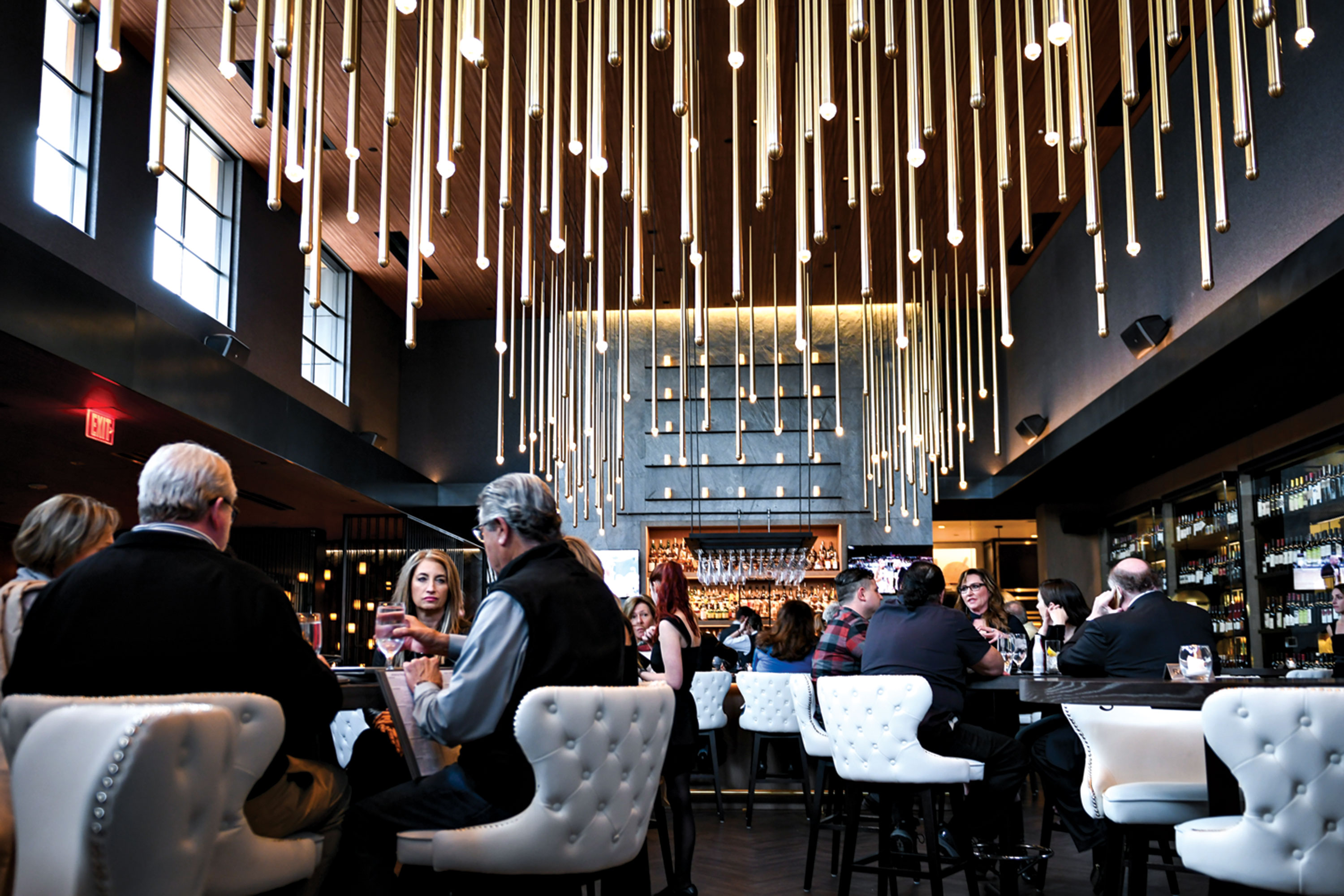 Ironically, I’m far less enamored of selections from that dazzling raw bar at the front door. Ocean 44 brags about its carefully sourced seafood, and I don’t doubt its claim, but I’ve had plumper, tastier and less expensive Blue Point oysters on the half shell recently at Bluewater Grill and Salt Cellar. Skinny Alaskan king crab legs, jutting from a bowl of ice and accompanied by creamy mustard, cocktail sauce, drawn butter and atomic horseradish, are similarly disappointing but crazy-expensive, the ice melting into the crab meat until it’s waterlogged and vaguely unappealing.

Hawaiian poke – a half-and-half plate of ahi and yellowtail, sprinkled with peppery togarashi – is decent enough, but not the most interesting in town. My pals and I regard an entrée of pristine, pepper-crusted bigeye tuna similarly – been there, ate that. And it’s déjà vu all over again with herb-rubbed, salmon-like Arctic char, which leaves us underwhelmed.

Because this is a Mastro’s restaurant, the à la carte menu features about a dozen wet-aged steaks cut in-house, and like those uniformly first-rate steaks (the carnivore in our group devoured a temperature-perfect, lightly charred New York strip with our help), the fish arrives mostly unadorned – boom, protein on a plate – the entertainment provided by over-the-top sides such as crunchy chive- and cream cheese-stuffed hash browns (love them) and a sugary corn crème brûlée that could pass for dessert. However, when the fish is as exceptional as the branzino – two firm, delicately flavored fillets, their silvery skins wood-roasted to a crisp – it really doesn’t need a blessed thing. 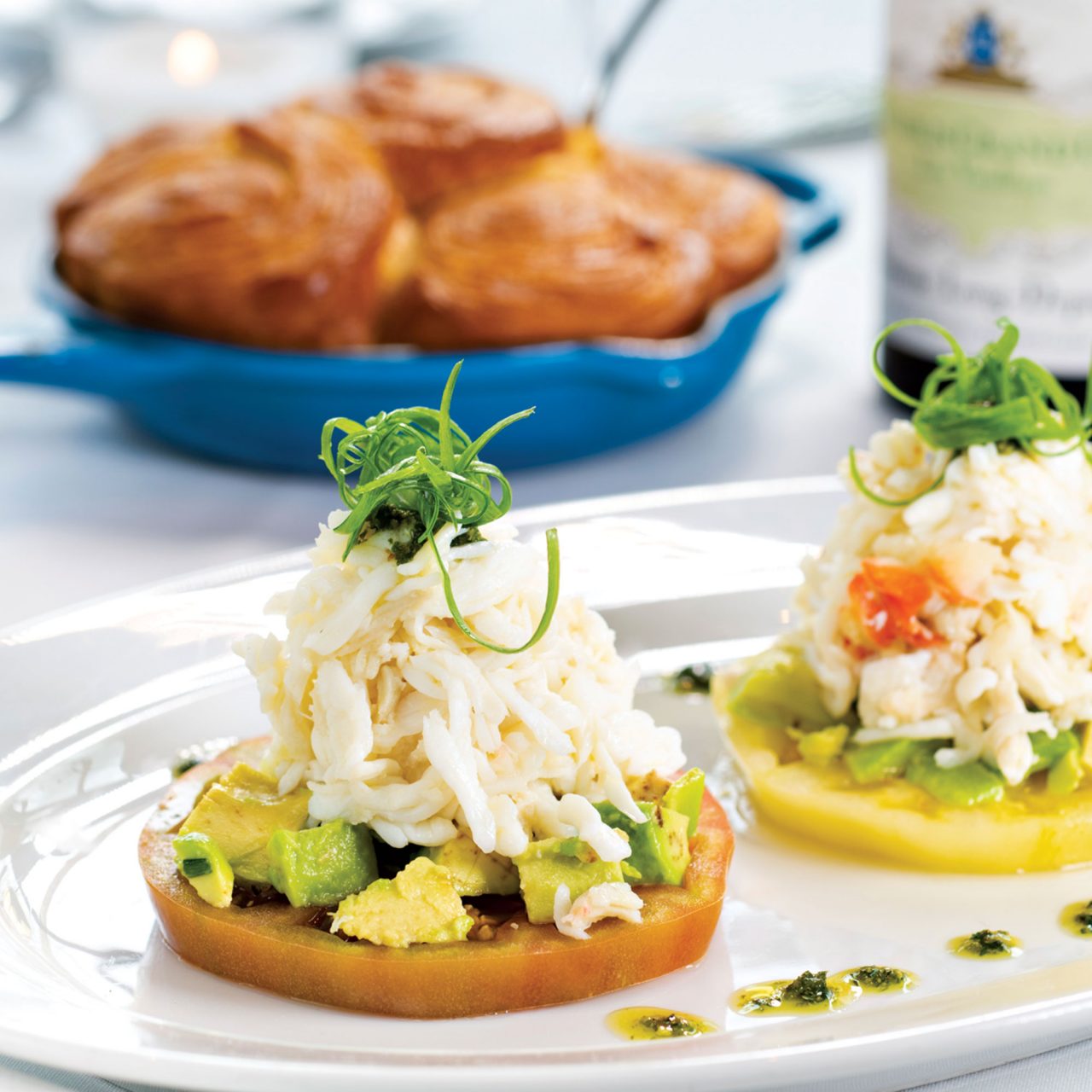 It’s pretty hard not to go gaga over the glamour of Ocean 44. Almost everything about the experience approaches perfection – except the showpiece seafood entrées, which range from good to great but never inspire that moment when the clouds part and the angels sing. Call me naïve, but when I’ve paid hundreds of dollars for dinner, I expect that moment. The menu is huge, and I haven’t given up, however. Next time, I’ll go big: lobster tail, king crab with steak, every luxury. Maybe in this sea-and-be-seen world, you really do have to pay to play. 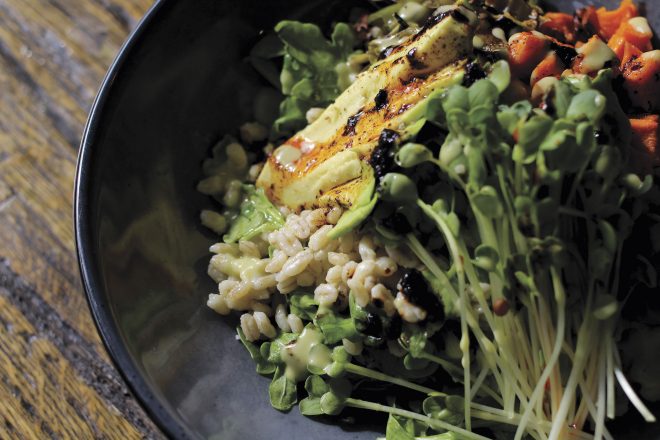