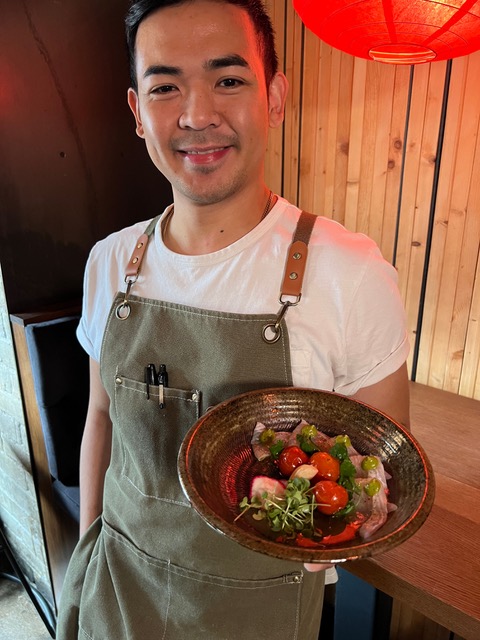 Sake Haus executive chef Joe Cajipe earned his cooking chops by working at his family’s Filipino restaurant in Chandler while going to college. The self-taught chef then worked in the kitchens of SumoMaya and Ra Sushi to learn the art of Japanese cuisine before landing the top chef gig at Sake Haus, which opened in April 2022. Here’s what he had to say about his new position.

How much does your Filipino background influence your cooking today?
I try to implement dishes with Filipino influence for our chef’s specials. I make sisig, which is typically pork snout and ears, chopped up and sauteed, but since we don’t have (much) pork at Sake Haus, I make it with salmon skin.

Did you have a hand in putting together the Sake Haus menu?
Yes, I created the entire menu. I also encourage my chefs on staff to be creative and to express themselves through chef’s specials that we offer. I try to learn and grow as a chef and I like to give them the same opportunity as well.

What are some of your signature dishes?
I try to highlight the understated items of sushi. When people think about sushi, they automatically think rolls. That’s fine, but we try to highlight the nigiri and the sashimi. We really (emphasize) the fish aspect and don’t just serve something doused in sauce that overpowers the flavor of the fish, which is essentially what you’re paying for. We also have an omakase experience, omakase meaning trust the chef. If you order that we’ll present a plate with five pieces of our favorite nigiri.

How are you trying to change people’s perception of sushi?
We try to present a different dining experience that people aren’t used to. We don’t have the typical California rolls or spicy tuna rolls. We try to elevate sushi. There’s a certain type of sushi called edomae, which is the classical presentation of sushi. All the nigiri and sashimi pieces are sauced beforehand, so when guests eat it, they don’t need a side of soy sauce and wasabi. They’re all dressed for the perfect bite.

What do you enjoy most about your work?
It’s an art and I can express myself through it. I’m grateful to be able to pursue my passion and it doesn’t hurt that my bills get paid. Not a lot of people can say that they’re pursuing their dreams. Some careers go for the paycheck, but for me, it’s the passion that’s important.

What kind of music do you play in the Sake Haus kitchen?
We play a lot of hip hop, but depending on the mood, we go through a lot of genres. Almost never country, though.