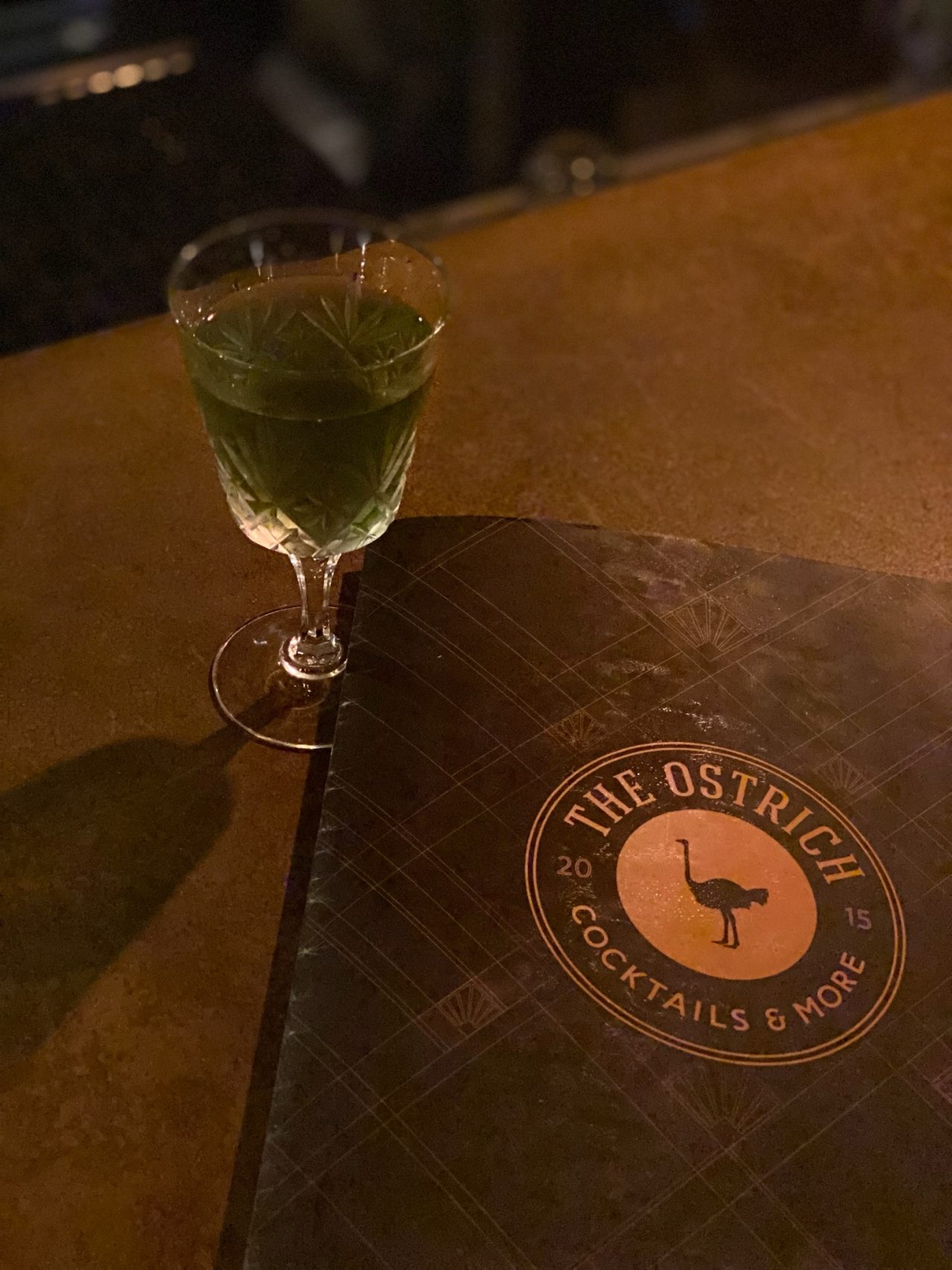 According to Jared Ammon, concocting creative, balanced cocktails is both an art and a science. The craft bar manager at The Ostrich, a speakeasy-style bar in the basement of the historical San Marcos Hotel in downtown Chandler, knows that a good cocktail is about much more than throwing together ingredients and pouring them in a glass.

“You kind of have to be creative to do this,” he says. “But it’s also very technical.”

Ammon and craft operations manager Tyler Zhorne and bartenders Samantha Dengler, Adam Slaton and Tyler Yenkala make up the small but mighty staff at The Ostrich. They are all trained in classic drink-making but are also able to flex their creative muscles with the unique Dealer’s Choice cocktail, which allows patrons to choose the liquor and flavor profiles and leave the rest up to the team.

“We only have four bartenders right now, but everybody is super well-trained and super intelligent and knows and cares about what they’re doing, so I think it reflects in the product we put out,” Ammon says.

His passion for craft cocktails is palpable, a fact that comes to light as he tells me about his somewhat unconventional foray into the industry. After getting a kinesiology degree from Arizona State University, he was working as a chiropractic assistant. “I realized I didn’t like the medical field. I was at a job where people didn’t want to come see me,” he says. “I want to be the person that people want to see and make them happy.”

As he explains it, he “dropped everything” to pursue his passion. Under the tutelage of Richie Moe, who Ammon calls “one of the bar godfathers of Arizona,” he worked his way up in the cocktail-slinging scene to where he is today.

The Ostrich team works tirelessly to instill a sense of community in everything that they do – think establishing a reverse happy hour to accommodate industry folks and partnering with other local establishments to showcase their respective talents. “One big thing we do a lot is guest bartending,” Ammon says. “It’s one way to keep the community together, and it’s fun to not work at the bar you work at.”

The Ostrich’s location is particularly personal to Ammon. Born and raised in Chandler, he has a plethora of pride for the area and wants it to be a destination worth the drive from all parts of the Valley. “There are so many cool bars in Phoenix and Scottsdale, and there are some in the East Valley but they’re kind of spread out, so it doesn’t get as much love,” he explains. “To have people that travel from Peoria or Goodyear or Scottsdale and come down here and see us is really important to me.”

The bar is inspired by the city of Chandler’s rich history and reflects the experience and atmosphere of a prohibition-style speakeasy. In fact, according to Ammon, the space was an actual speakeasy more than a century ago, which is honored through The Ostrich’s décor and drinks. He adds, however, that a successful bar is not marked by its tangible offerings, but it’s quality of service. “Cocktails are cool and that’s the product we put out but what I always say is the actual product is our bartenders and how they treat people and talk to people… It’s more important that we’re being good hosts and taking care of people and making them happy,” he says. “Being technically proficient and making people drinks is awesome, but for me that’s just icing on the cake. We really all care a lot about what we do. Our job is to take care of people. I put a premium on that.”

Another thing to note about The Ostrich and everything it represents – it’s refreshingly unpretentious. Though Ammon and his colleagues take their craft quite seriously and strive to be the best at what they do, they’re remarkably humble about it.

The staff is currently cooking up a new meticulously curated cocktail menu, Ammon hints. “Menus are very important to me and our staff because they’re like little pieces of yourself. It’s really cool to create something and watch 200 people enjoy it a night,” he says. “You’re giving a part of yourself away. For us, it’s not just making a cocktail. This is so much time and effort and love.”

Those sentiments are discernible in the drinks they serve me during my visit. Ammon suggests his favorite cocktail, albeit with a bit of a disclaimer. I’m surprised when he tells me that drink is a daiquiri. The classic cocktail, he continues, has to some degree been debased by blended iterations, often overly sweet with unbalanced flavors. A true daiquiri is not blended and relies on three simple ingredients – rum, citrus and sugar. The drink that arrives in front of me is beautifully balanced, not too sweet and totally challenges what I think I know about cocktails. This is how it goes at The Ostrich.

Next, I’m eager to challenge the team with the Dealer’s Choice cocktail. My instructions: spirit-forward, mezcal-based, fruity and floral. The result is a sage-colored cocktail served in a coupe glass. Again, it’s not what I expected. Again, I am pleasantly surprised. It feels at once like a creative masterwork and a chemistry experiment. After all, a good cocktail is both an art and a science.