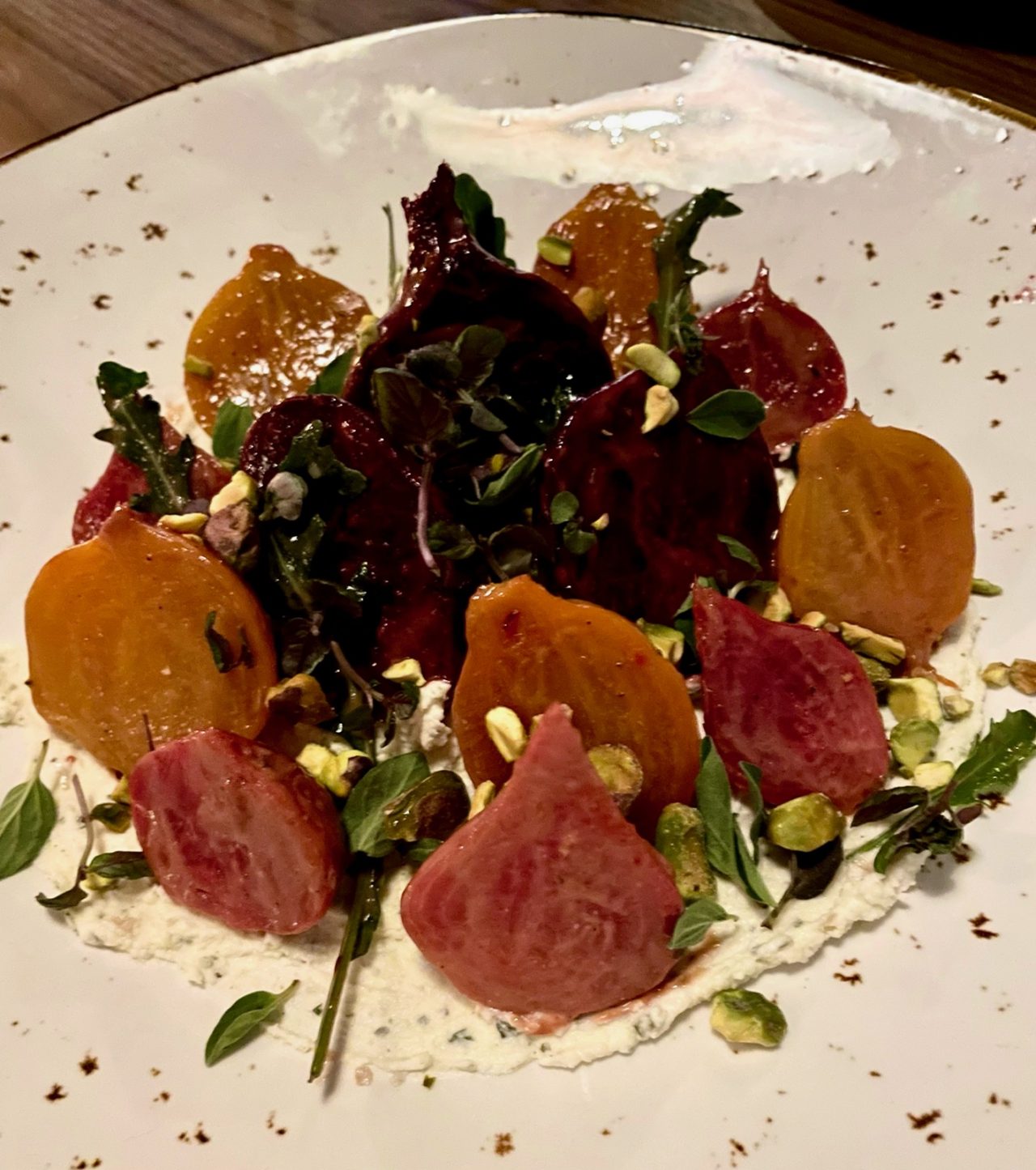 Charles Barber looks happy tooling around in his new restaurant, a sleek North Phoenix spot he named Aftermath to reference what came before and what comes next for him. As you may already know, he partnered with Dom Ruggiero to open Hush Public House in 2019, Barber running the front of the house, Ruggiero manning the stove. The place was a runaway hit and remains wildly popular, but after two years, Barber was ready to strike out on his own. To that end, he tapped longtime friend Dave Bowman, former executive chef at Zinc Bistro (Barber ran the bar there for over a decade), to join him in his new project.

After months of construction blood, sweat and tears (I’m guessing on the blood part), the two opened the restaurant before Thanksgiving. Open ductwork lends a vaguely industrial vibe, but there’s elegance in the stark simplicity of white brick, black booths and candlelit tables. And glory be! The chairs are comfortable, a thing so rare these days. Garage doors lead to a small, cozy patio furnished with heaters, and on the wall near them hangs a colorful painting of patron saint Anthony Bourdain.

The menu offers 10 shareable plates, which is perfect for people (like me), who’d rather graze than settle in with an entrée. But, of course, there are also entrees, about six of them, including a burger and a pasta. Our server also drops a daily menu featuring three kinds of oysters and the entrée special of the day, which he’s sampled and swears by. Like many Modern American menus, this one is rife with home-turf dishes fortified with the occasional eclectic ingredient — harissa here, miso there, that sort of thing. From the shareables section comes thick, golden corn bisque, its silky surface garnished with watermelon radish, roasted shishito and burnt onion, ingredients offering crunch, heat and sweetness respectively. The corn has been grilled, providing an underpinning of smoke and char, but what really sets this bisque apart is the accompanying bread roll, veneered with Nduja (think spicy, spreadable sausage) that has turned black and impossibly crunchy under the broiler. Wow! Give me three or four more of those (our terrific server did, indeed, bring us an extra when we raved about how good it was). This dish throws surprising heat.

Also wonderful — roasted baby beets of every beet-y hue, nestled in a creamy bed of Boursin cheese spread. The dish is strewn with arugula and pistachios and drizzled with balsamic vinaigrette. The combo is fantastic, but later I realize our plate lacked the oranges and rye crisps the menu mentioned. I’m guessing it would have been even better with them.

Another share plate of local jumbo shrimp arrives atop a sweet, earthy puree of sunchokes spooned with basil vinaigrette. It’s a surprisingly good combo, intensified by fiery cascabel chile paste and Marcona almonds. Bowman’s flavor combinations are brilliant, as is his use of textural contrast. Last of all, I love two dainty Key lime bars, built on graham cracker crusts and spooned with a Chantilly cream containing crackly bits of crystallized ginger. Garnished with a candied lime wheel, the little bars are all they should be — tart-sweet, crunchy-smooth and just plain fun.

I can’t wait to come back and sample more from the menu. I’m betting Aftermath will become an upscale but laidback fixture for North Phoenix and the burbs beyond.