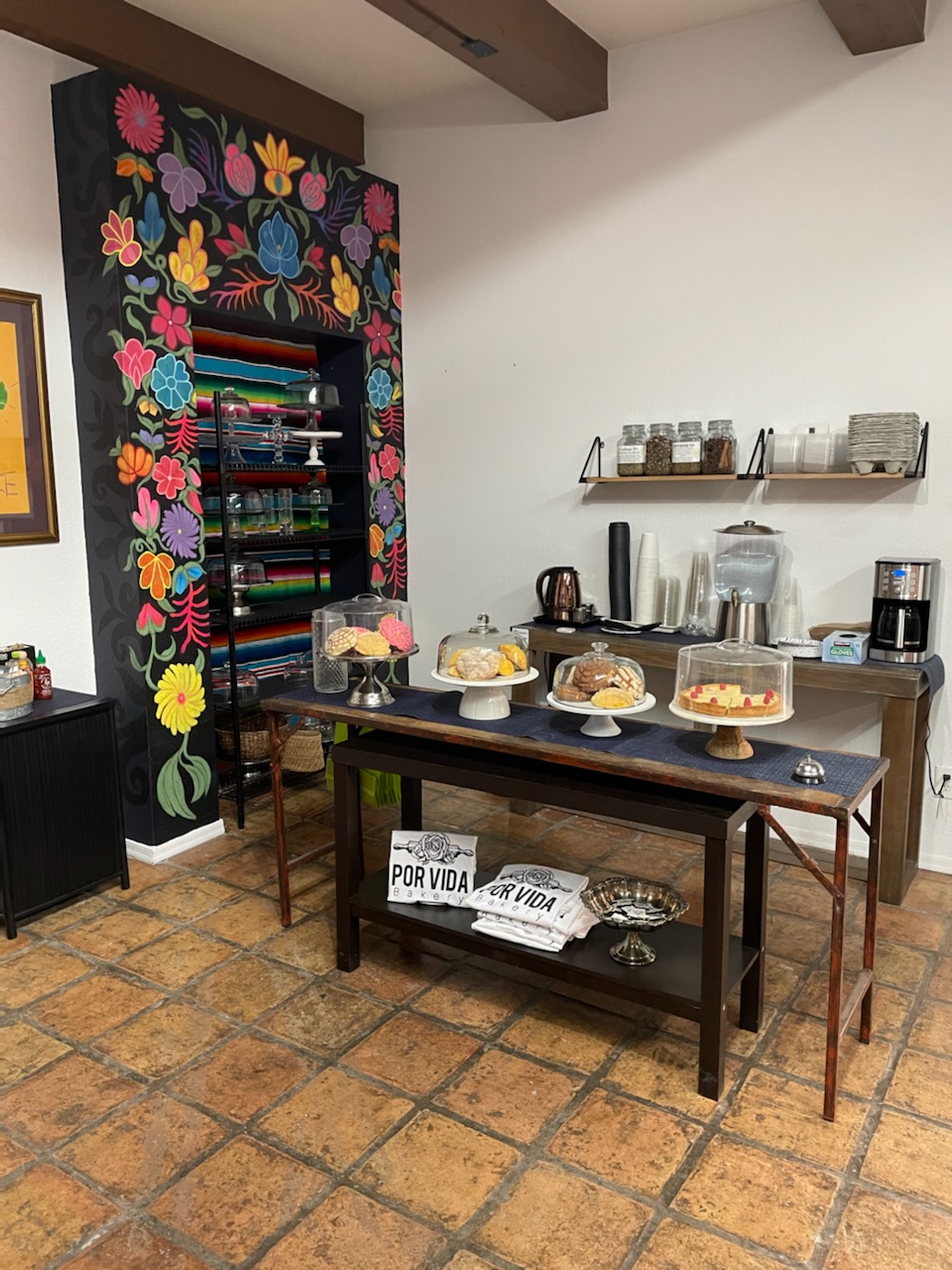 Por Vida, which inhabits an adorably decorated, prominently placed corner of Palabras Bilingual Bookstore, isn’t your typical bakery at all. You won’t find rows and rows of pastry cases or the commercial ovens that turn out dozens of baked goods at a time. Although there’s a small kitchen outfitted with an oven on the bookstore’s premises, baker and budding entrepreneur Eileen Payan actually does much of her baking at home, hauling in her cookies, puff pastries, empanadas, quiches and cakes to be neatly displayed on a long table containing a half dozen covered cake plates. Except for one small table holding straws, napkins, sugar, honey and Sriracha and another larger one holding cups, coffee and whatever fresh drink Payan might have made for the day (say, fresh cantaloupe juice), that’s pretty much it — a mini bakery, a bakery with aspirations, the little bakery that could.

But here’s the important part: you won’t care whether Por Vida looks like a bakery because Eileen Payan can bake. Commercial kitchen, home kitchen — no importa. Although she’s pretty much self-taught, she’s worked for Danielle Leoni (Leoni’s Focaccia, now defunct) and Noble Bread. Payan pretty much embodies the whole “nothin’ says lovin’ like somethin’ from the oven” ethos, so let’s begin with the basics — her chocolate chip cookies, studded with whatever strikes her fancy (White chocolate? Pecans?) but more importantly, offering up that little veneer of crispiness that gives way to soft, chewy goodness ($3). They’re wonderful — as is a buttery shortbread bar layered with salted caramel ($4) and a brownie square, its imploded top (from which chocolate ganache gushes) littered with chocolate chips and walnuts ($4). When you get a brownie square, all four sides are like that chewy corner piece every brownie lover loves. It’s a beautiful thing. She also makes a light guava-mascarpone pie dotted with raspberries and a dark chocolate layer cake — ultra-rich, ultra-moist — slicked with Italian buttercream and drizzled with caramel-y dulce de leche. I’m not a cake person, but I love this cake ($5). On any given day, Payan also features a few savory specialties. Quiche shows up often, its cream-enriched, eggy filling baked in a flaky pie crust so buttery that croissants come to mind. On this day, there are two: one containing corn, green chiles and cheese, another streaked with red, green and yellow bell pepper, which might sound a bit prosaic but, I assure you, it is not ($7). Her empanadas are equally delish, the sturdy, crispy dough enveloping aromatic picadillo, sweetened with raisins and spiced with a bit of chile ($6).

This hot spring day, Payan offers a virgin mojito (basically minty limeade) so refreshing I could drink it by the gallon, not the cup. Apparently, everyone loves it so much she may make it a regular thing. That’s good. I could make Por Vida a regular thing, too. In Spanish, Por Vida literally means “for life,” but the connotation is more like “committed.” You’ll appreciate her philosophy in your first bite.