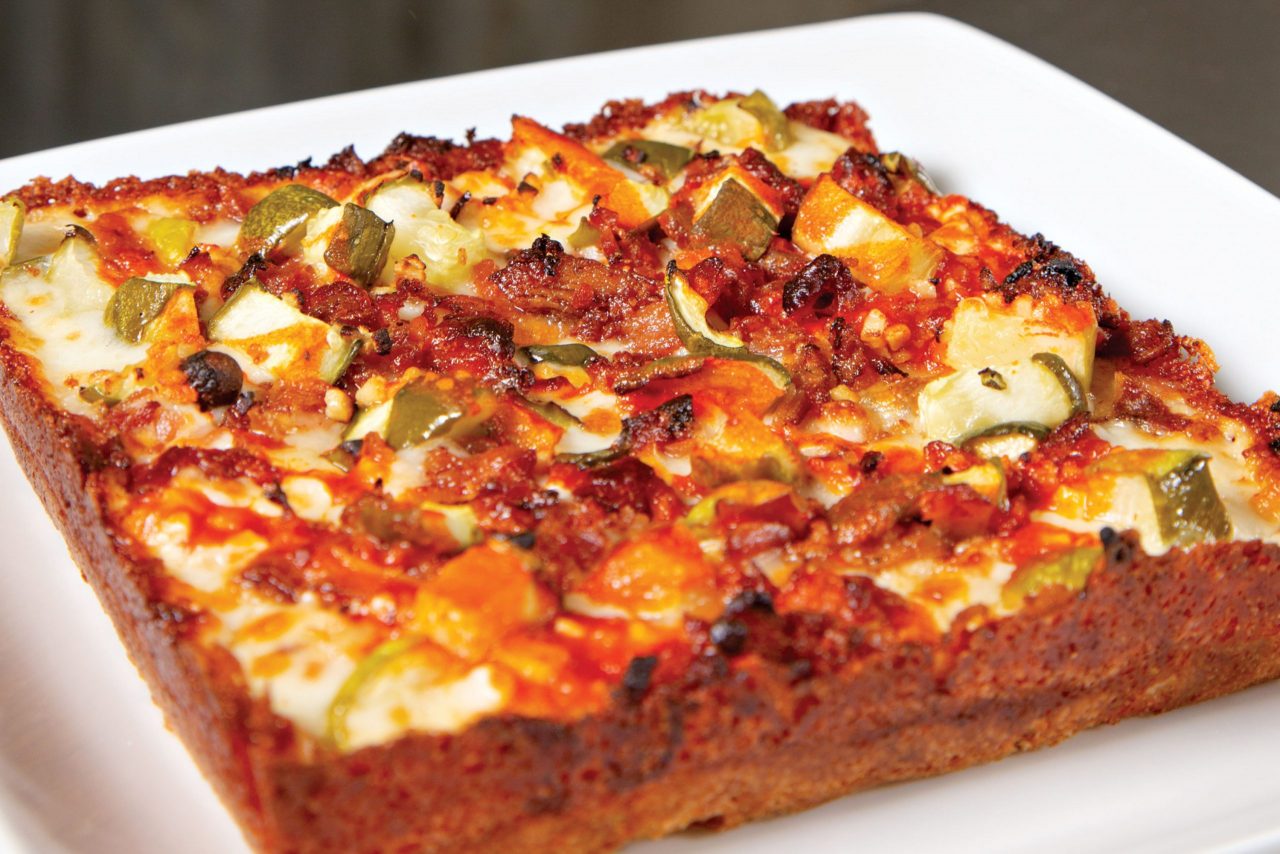 One of the trendiest pizza styles is still among the most rare. If your engine’s revving for some Motor City-style pizza – famous for its square, drip-pan shape – you’re limited to these three purveyors.

The Rec Pizza & Wings
Rectangular pizza has a spotty track record among mainstream pizza fans, evoking hazy memories of frozen-aisle Stouffer’s pizzas and similarly uninspiring Little Caesars flashbacks. But make no mistake: Square pie can be divine, particularly in the sure hands of a craftsman like The Rec owner Mark Gluck. Done “Detroit-style” in his two Peoria storefronts, the pizzas (pictured, starting at $6 for a personal-size cheese) are cooked with high-hydration dough in deep steel pans, emulating the auto-shop drip pans originally pressed into service by innovative Motor City pizza-makers back in the 1950s. Toppings and cheese are layered edge-to-edge before baking, resulting in a crispy, caramelized ridgeline receding into a soft, focaccia-like interior. Crowned generously with toppings both expected (the pepperoni-laded Detroiter) and less so (spicy pickle and bacon), Gluck’s perpendicular pizzas do Detroit proud. Vroom vroom.
Two Valley locations, therecpizzeria.com

Fly Bye
It looks like Fox Restaurant Concepts has finally found a keeper for its back-of-the-lot kitchen at The Yard. Purpose-built for grab-and-go pandemic dining, Fly Bye slings crispy, luscious, Detroit-style pies out of the 7th Street eat-and-play compound, excelling where two well-executed but ill-fitting restaurants (Barrio Urbano and Little Cleo’s) couldn’t quite stick. Besides the rectangular pizza (available in 11 styles, feeds 3-4, $20-24), the kitchen also churns out masterful chicken wings ($13-$25) and tenders ($12-$23), deep-fried with authority (read: good and crunchy) and bathed in a choice of shellac-like sauces from “chipotle BBQ” to “poppin’ Asian.” It used to be fashionable for jaded food-critic types to deem Little Cleo’s “the best Sam Fox restaurant.” Fly Bye seems like its heir apparent.
5632 N. 7th St., Phoenix, 480-866-8201, flybetogo.com

Jet’s Pizza
Founded in Sterling Heights, Mich., this deep-dish legend has “hundreds of locations in 19 states,” but just two in the Valley, serving square-sliced Detroit-style pizzas (starting at $12 for a two-person “4 Corner” pizza) speckled with those little roni cup pepperonis you remember from cafeteria single-serving pizza a kid. The chain also does gluten-free pizza, New York-style thin pizza and all the other permutations you’d expect from a well-run corporate chain with hundreds of locations in 19 states.
Two Valley locations, jetspizza.com

Pizza A Metro
Since quietly inserting itself into the Valley’s upscale pizza scene in 2008, this unassuming Central Phoenix shoebox restaurant has gradually amassed a loyal following with its captivating pan-Italian pasta menu and thin, crispy-edged, Venetian-like pizzas. Though not perfectly rectangular, they are mathematical – served, if you like, a metro, or “by the meter.” Wood-fired to achieve that telltale Venetian smokiness, and daubed with a slightly sweet tomato sauce and big, gooey medallions of mozzarella, offerings like the Capricciosa (artichoke, mushrooms, olives and ham, $36.95) are definitely worth the extra square footage. Even if you can’t quite down the whole meter, there’s always domani.
2336 W. Thomas Rd., Phoenix, 602-262-9999, pizzametroaz.com

PV Pie and Wine
Boldly, this parlor-esque emporium of craft pizzas and high-concept salads opened in early June during the height of the pandemic, so entering the realm of unusually shaped pizza didn’t make general manager John Woo flinch at all. PV’s wood-fired pizzas are more tubular than rectangular, but slices are cut square, and will typically fill up two people, according to Woo. Provenance-wise, they’re a fun hybrid of Roman and Venetian styles, with the shape of the former and the thin crust of the latter. “A little crisp, not too thick or thin,” says Woo, who – like chef James Moran – moved over from The Covenant, the gastropub that occupied the same spot in Phoenix before shuttering this spring. Many of the old restaurant’s most popular small-plate offerings followed them, including Brussels sprouts with chipped pork belly and short rib ravioli. And a few bottles of wine, we imagine.
4740 E. Shea Blvd., Phoenix, 602-595-7440, pvpieandwine.com