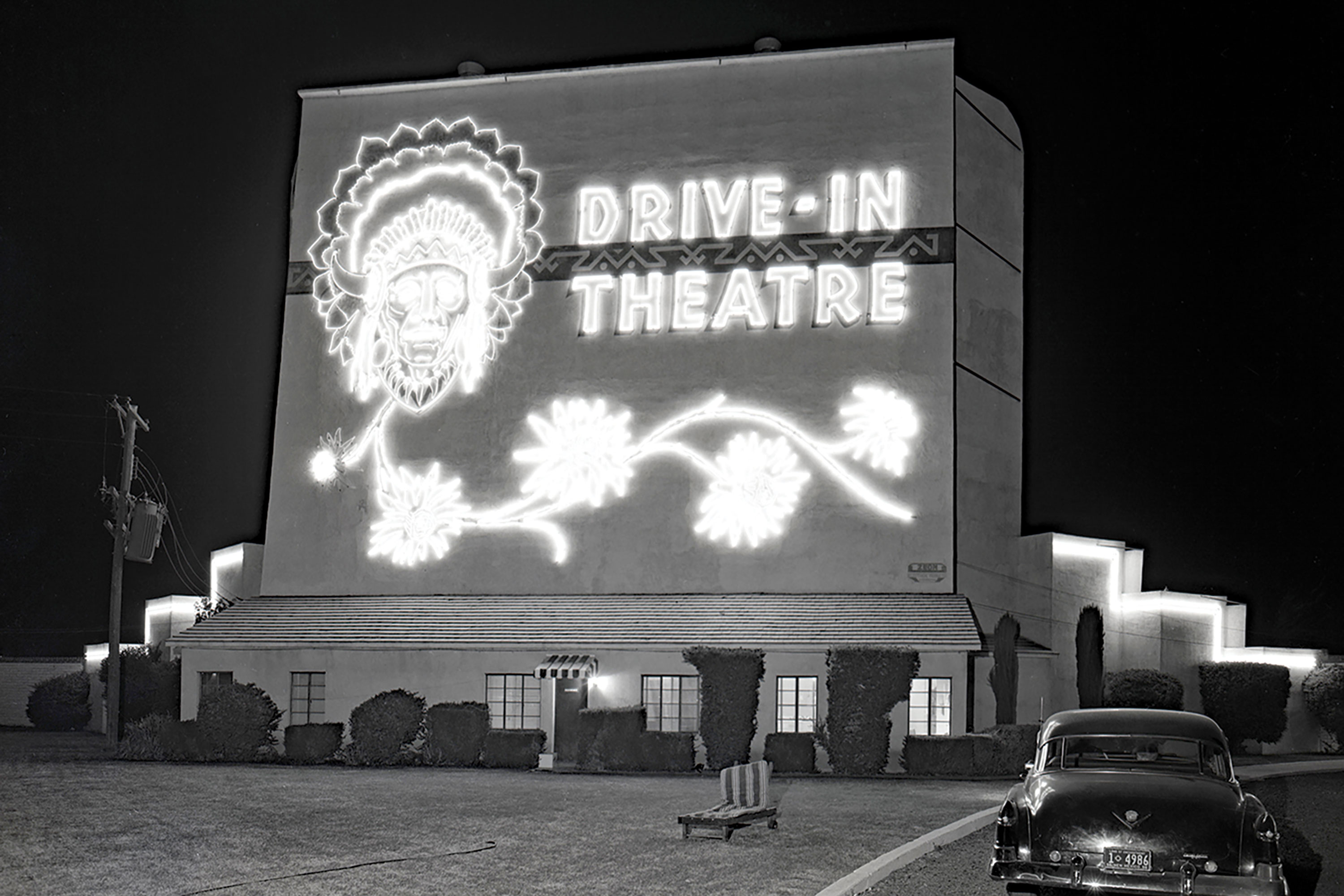 Drive-in movie theaters were a rite of passage for generations of teenagers after World War II, a place to hang out with friends – or sweethearts. “My favorite memory was bringing my date to see Barbarella at the Round-Up Theatre in Scottsdale in 1968,” says a long-time Phoenician, who requested anonymity since he’s happily married to another lady. “However, I have absolutely no recollection of the movie or even Jane Fonda’s sultry Space Age outfits,” he confesses. Now largely a relic of the past – there’s only one left in the Valley – drive-ins embodied a pivotal period in America.

The newfound ability to watch a film on a huge outdoor screen in the semi-privacy of vehicles dramatically altered how young people spent their evenings. Drive-ins served as fogged-window petri dishes for teenage romance, especially when parked far from the snack bar for seclusion. Arizona state historian Marshall Trimble recalls the Big Sky Drive-In on Indian School Road near 41st Avenue, which featured “dawn-to-dusk” movie marathons. “I had several ‘all-nighters’ there with Maryvale girls,” he says. “But I was too shy to take advantage of the situation.”

Drive-in theaters, the first of which opened in New Jersey in 1933, thrived in the Valley, as the climate allowed year-round operation. Arizona’s pioneer drive-in was the Phoenix Theatre at 36th and Van Buren streets, which opened in 1940 with room for 612 vehicles. The theater’s ornamentation was as memorable as the movies promoted on its marquee. “On the backside of the outdoor movie screen was the stunning face of a beautiful Indian maiden in neon,” says Phoenix native William Linsenmeyer, a retired University of Wisconsin history professor.

After World War II, at least 20 more drive-in theaters were opened by developers lured by the Valley’s cheap land and burgeoning population. These included Acres of Fun, Big Sky, Cactus, Cinema Park, El Peso, Indian, Northern, Nu-View, Rodeo, Silver Dollar and Valley in Phoenix; the Oasis in Avondale; the Mustang in Chandler; the Thunderbird in Glendale; the Pioneer, Sands and Velda Rose in Mesa; the Roundup in Scottsdale; and the South Twin in Tempe. 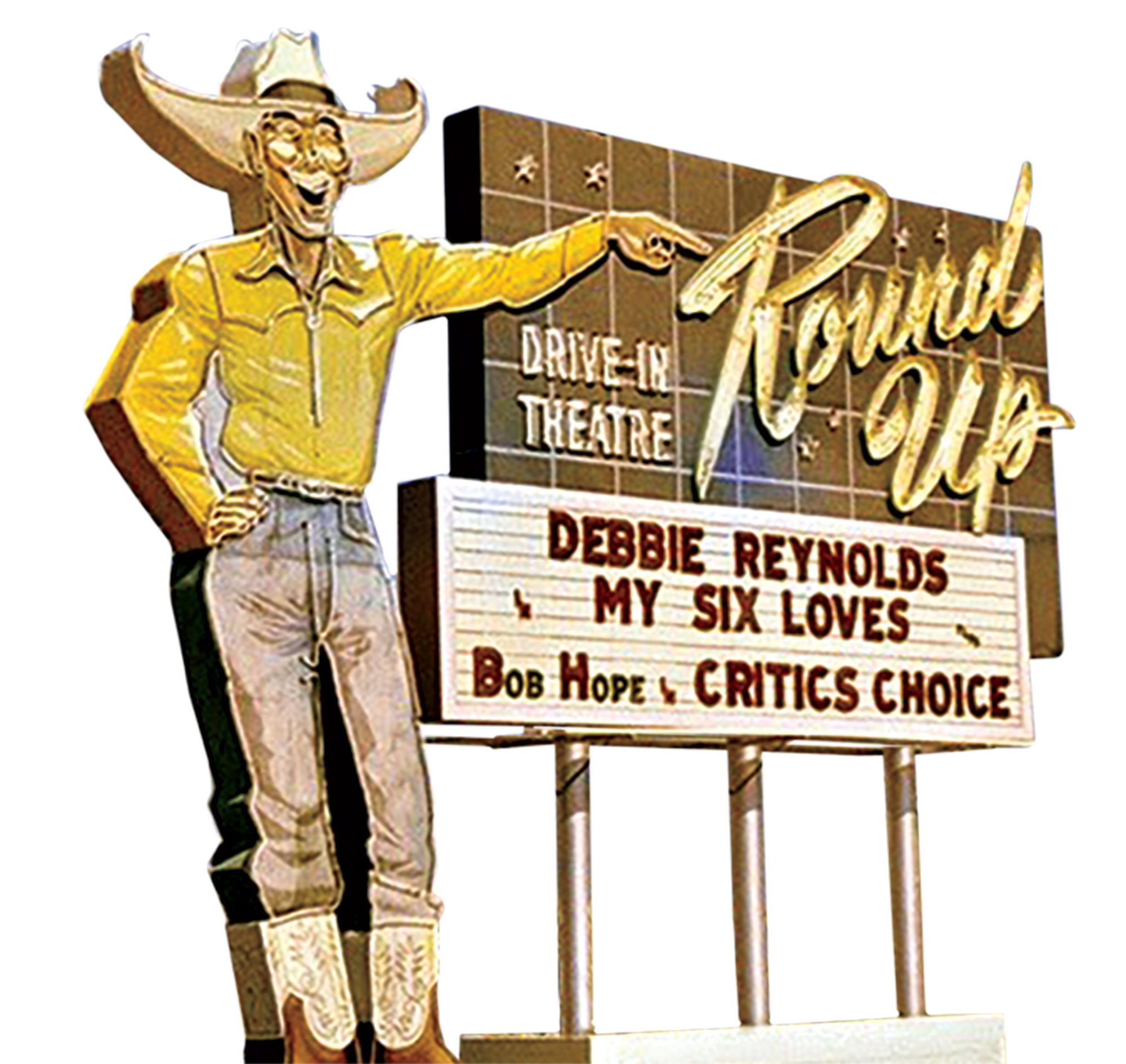 Teens weren’t the only fans. Parents loved the concept because they could bring the whole family and save money on babysitters. They nestled pajama-clad toddlers with pillows and stuffed animals in the back seat. Pre-teens created their own entertainment. “They were more of an outing than actually watching a movie,” says Barry Warner, a Mesa construction superintendent. “We’d hit the snack bar, play hide-and-go-seek between the cars and have fun with other kids.”

“Most of the drive-in theaters had playgrounds for the kids,” Jerry Roose, an environmental director for Freeport-McMoRan who lives in Gilbert, says. “Which was good, because we were so busy having fun on the equipment that we didn’t notice the R-rated movies on the screen.” Double features were common, and often included a cheesy horror flick that had kids peeking through their fingers at the screen.

Drive-in theaters were a hotbed for missteps and hijinks, like driving off with the speaker attached to your car window, or climbing the ladder on the back of the screen to dangle your feet over the top. The most common mischief was sneaking in, a trick Roose once attempted. “I hid in the tiny trunk of my friend’s Karmann Ghia sports car at the South Twin,” he says of a claustrophobic’s nightmare scenario. “We got in, but they were suspicious that a guy would go to a drive-in alone and later nabbed us. I offered to pay the admission, but they tossed us out.”

Gals weren’t immune to shenanigans, either. Phoenix historic preservationist Kim Kasper recalls heading to the Round-Up with six others in a friend’s new 1964 Mustang, a 16th birthday present. “It was decided that I would be the person to go in undercover, literally,” she says. Kasper hid under a blanket on the back-seat floorboard during the long, hot ride from Central Phoenix. “I believe I suffered heatstroke; I was barely conscious when we arrived and have no idea what movies we saw.”

Drive-ins battled this problem by charging by the carload. This suited Mesa research scientist Jeremy Rowe, who owned a 1951 Cadillac hearse he used to carry equipment for his garage bands. “In 1968, I took 17 friends to the sci-fi double feature at the Cinema Park Drive-In,” he says. “The attendant freaked out at giving us the $1.50 single-car rate, but relented after horns started blowing down the line behind us.”

But by the 1980s, drive-ins had bigger problems. “Cable TV and VCRs allowed young, cash-strapped couples with kids to be entertained at home,” says Kevin Patrick, a professor of geography at Indiana University of Pennsylvania and pop-culture author. “At the same time, the real estate worth of these large parcels had skyrocketed after 30 years of surrounding development, influencing their redevelopment to a more valuable land use.” 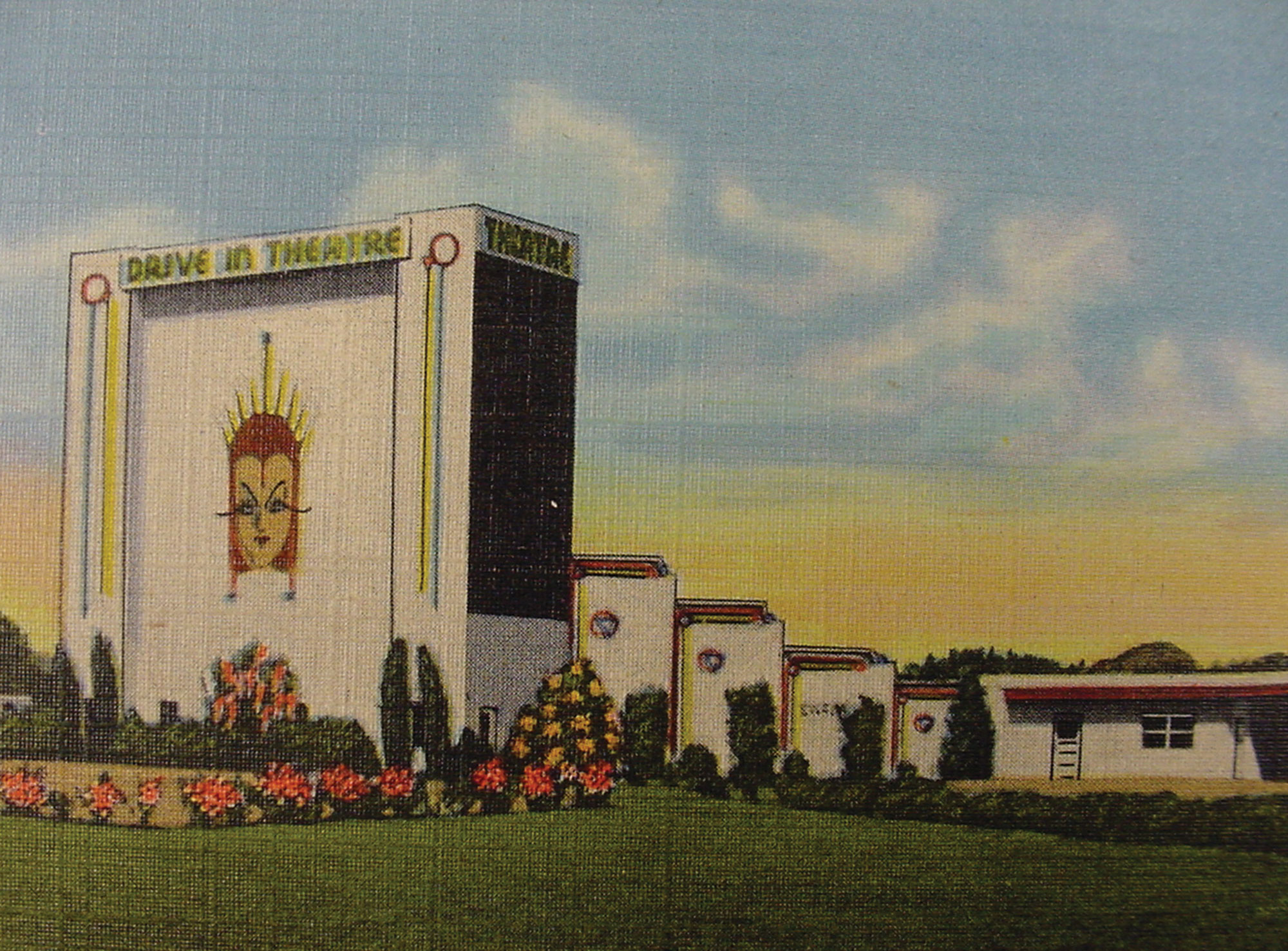 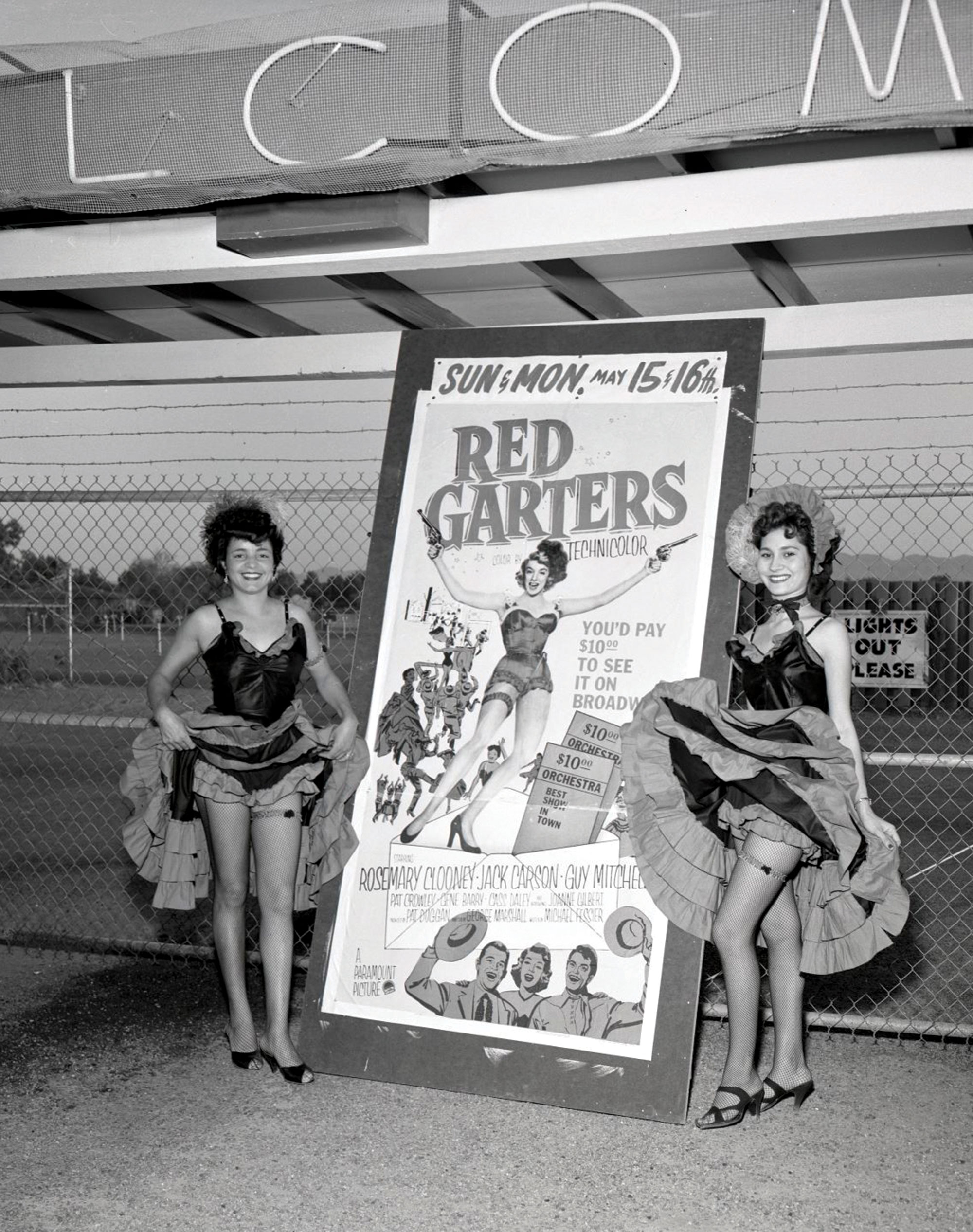 Forty years later, this Americana icon has been reduced to a single venue in the Valley, the West Wind Glendale 9 Drive-In. Patrons listen to the movies via the radio instead of static-filled speakers, but other experiences are timeless. “We often take the family on discounted Tuesday nights for the triple features,” says Cindy Hrnicek, a Phoenix yoga studio owner. When pressed for their most memorable outing, she confesses. “One night, we were all so tired we fell asleep during the last movie. When we awoke, the place was dark, and we were the only car left.”

Operated from 1948-1981 near 27th Avenue and Indian School Road. Lots of messing about went on, says Lynn Rieckhoff Lindell, who lived nearby. “We would sit on the front porch on Saturday nights and watch cars stop,” she recalls. “They’d open the trunks to pile a bunch of people in.
It was crazy!”

Operated from 1953-1981 near 12th Street and Buckeye Road. Owners paved the site to dissuade gold excavations on the property, which once belonged to Jacob Waltz, alleged discoverer of the Lost Dutchman Mine. “The theater attached a speaker to our fence so we would hear the movies,” says Christina Lyn Garcia, who still lives next door. 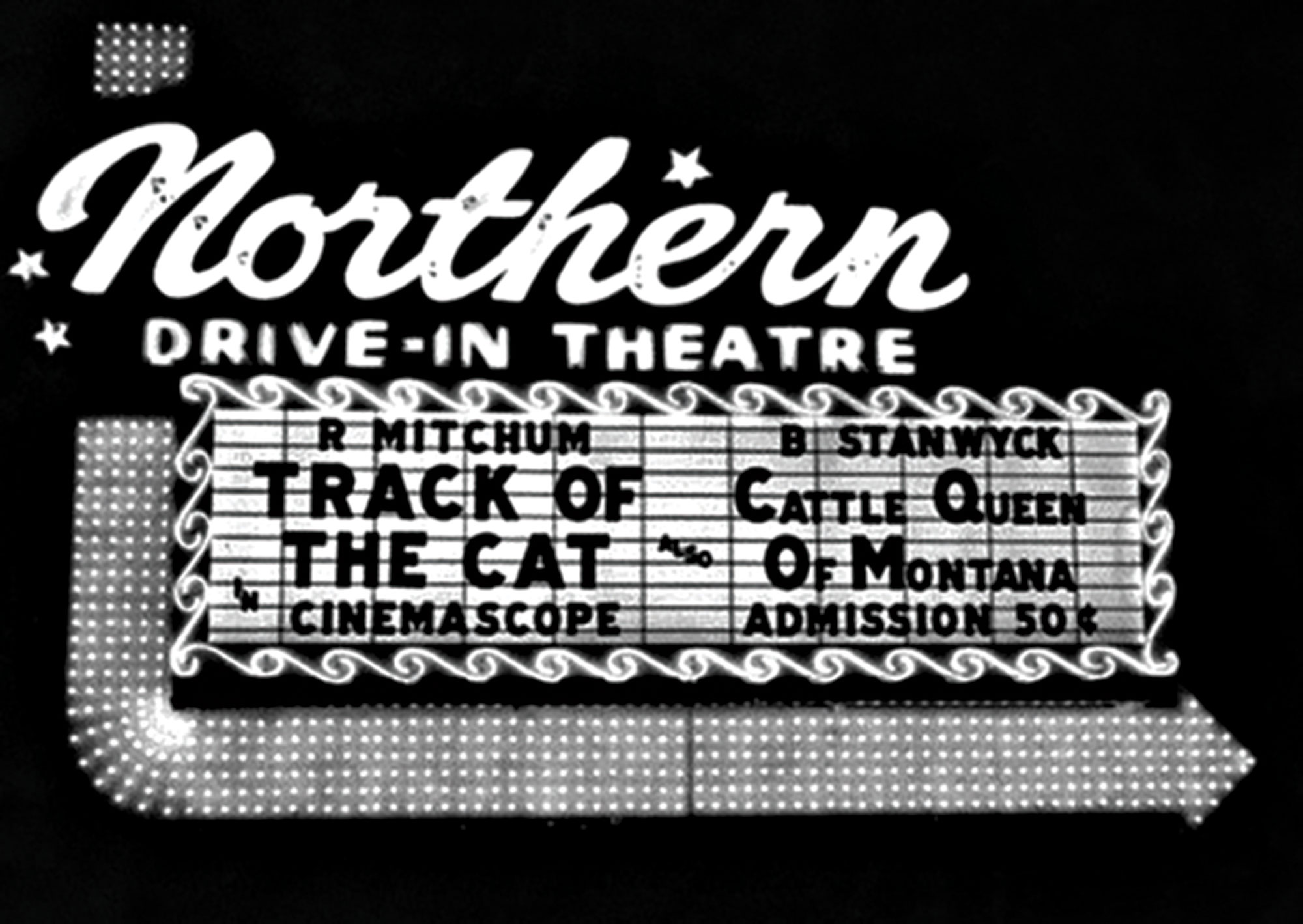 Operated from 1955-1978 at 2526 West Northern Avenue. “My brothers and I called the Northern ‘Blura-color,’ meaning the projection house was too far from the screen,” says Bill Bernard, a former city treasurer. “This resulted in a picture that was a little less clear than most drive-ins.”