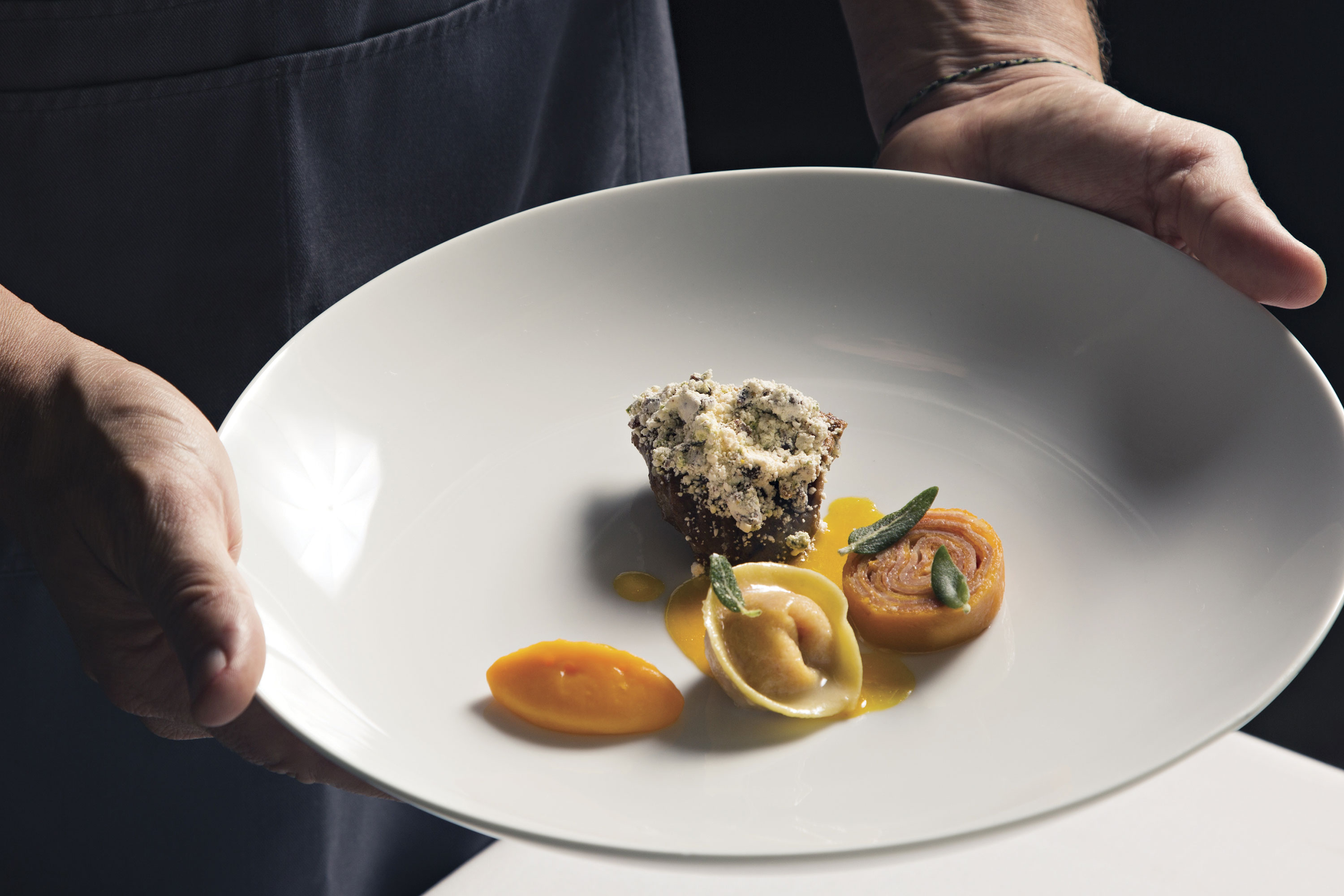 Michelin, Shmichelin. Chef Cory Oppold creates modernist, multi-course wonderment at the storied Scottsdale BYOB – even if the world at large doesn’t know it.

Tejal Rao, the California restaurant critic for The New York Times, recently reviewed three extravagantly expensive Michelin three-star restaurants in Napa – including Thomas Keller’s hitherto Teflon-coated French Laundry – and maintained that they were uniformly “delicious and dull,” a sideswipe that struck me as brave, bratty, possibly astute and decidedly First World-y. I read it the day before my final visit to Atlas Bistro, the South Scottsdale BYOB operated by Todd Sawyer, who has quietly catered to foodies and wine wonks for nearly two decades, and I was struck by how far from the effete elitism of the Northern California dining scene this modest hideaway seems to be.

Unassumingly tucked inside the AZ Wine Company bottle shop, Atlas plays in the same modernist, multi-course sandbox as French Laundry and those other Michelin-starred budget-busters, but I can’t imagine any self-respecting critic deeming it disappointing or boring on any level. I’m thrilled that $65 per person – plus a $15 corkage fee – buys an ingenious prix fixe dinner in a city Michelin has never deigned to visit. Executive chef Cory Oppold is the man who makes it happen, and I love his style, which seamlessly melds classicism with New American swagger.

Oppold, whose CV includes both illustrious local resorts (Different Pointe of View, L’Auberge de Sedona) and celebrated indie restaurants (Binkley’s, Tarbell’s), has headed the kitchen at Atlas for five years now, a long run for a restaurant that has typically served as a launching pad for talented up-and-comers. (Cullen Campbell of the late Crudo and Keenan Bosworth of the also-late Pig & Pickle worked here.) Although he amassed a trove of favorable written and word-of-mouth reviews, Oppold never tasted celebrity until this past May, when he won the “Eat Your Vegetables” episode of Chopped and received $10,000. In any case, his virtuoso knack for detail and staging becomes evident before the first course ever hits the table. 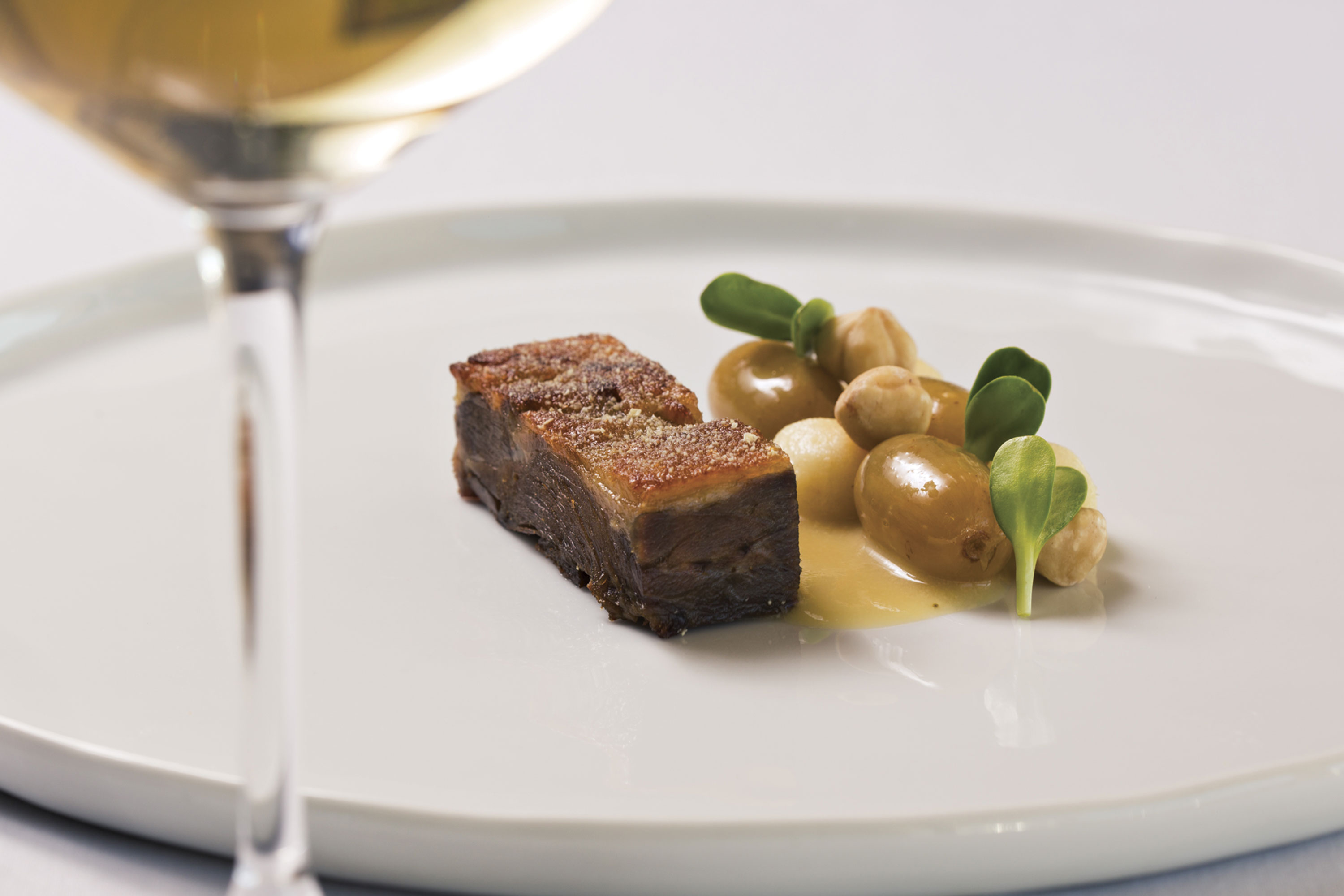 The meal begins with an amuse-bouche: on one visit, bits of trumpet mushroom in ruddy miso broth, fragrant with dashi; on another, a crudo of pale pink hiramasa kingfish, set in a pool of cucumber-horseradish emulsion. Both were excellent, portending good things to come.

A clever first course of brined beets – cut into short planks and stacked like a tiny Lincoln Logs hut – is an entirely fresh take on the done-to-death beet salad. Actually, it’s more like a borscht on stilts. Inside the hut, you find a dollop of sour cream; around its edges, creamy orbs of mustard-spiked custard and dill fronds; and across the top, dewy cups of pickled pearl onions and caraway seed crackers, cut in strips and reddened with dehydrated beet powder.

Second courses are a little sturdier (not that you’re likely to find the same dishes twice – Oppold tweaks the menu frequently). This is especially true of a fluffy oversize oval of basil ricotta gnudi (think ravioli minus the pasta) flecked with Swiss chard and basil. Instead of serving it in tomato or lemon sauce, Oppold takes a deconstructed approach, surrounding it with a ladle of glossy garlic béchamel for richness, a spoonful of San Marzano tomato jam for sweetness and acidic pop and a handful of breadcrumbs for crunch. As delicious as it is, it’s not my favorite second course. 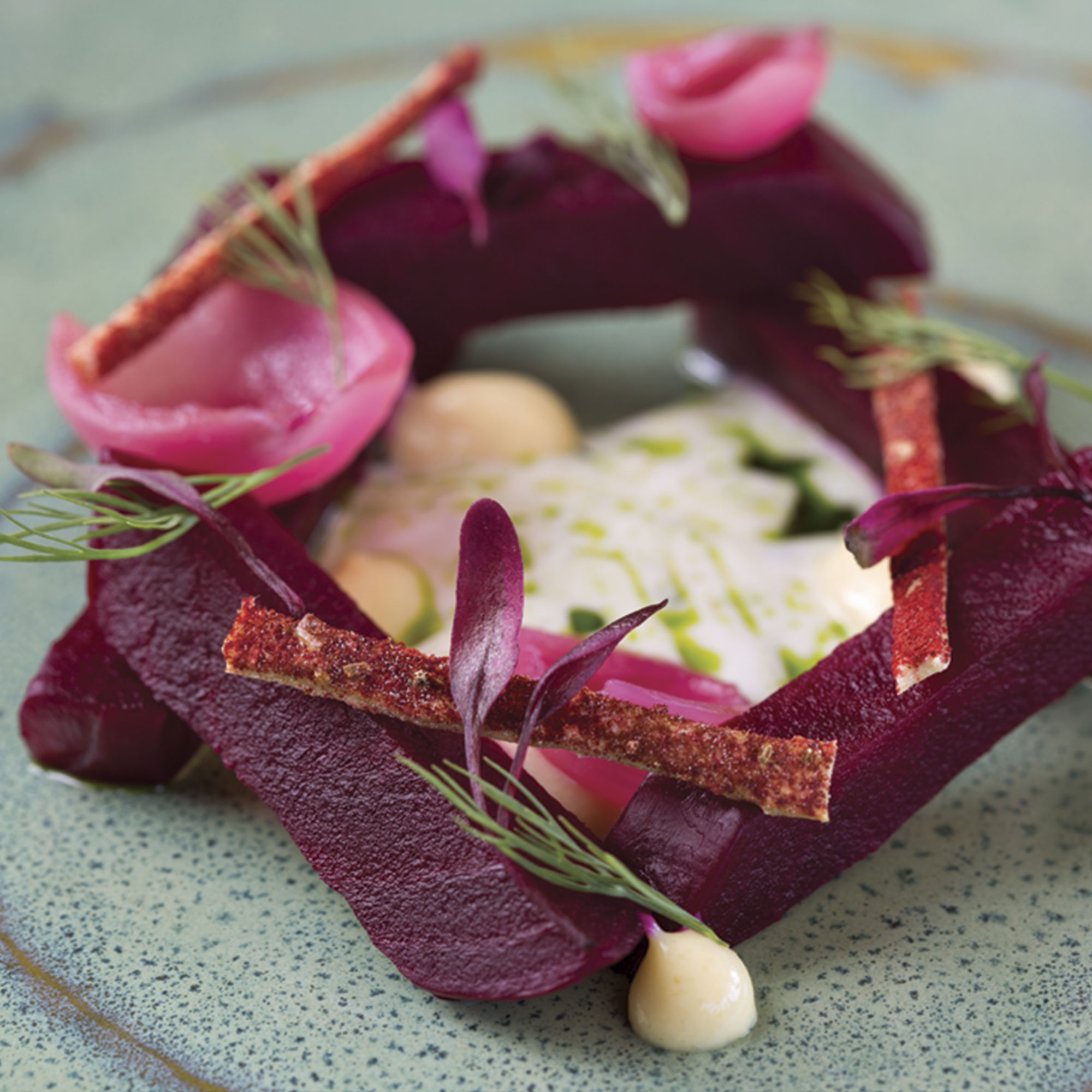 beet “pastrami” with custard and dill 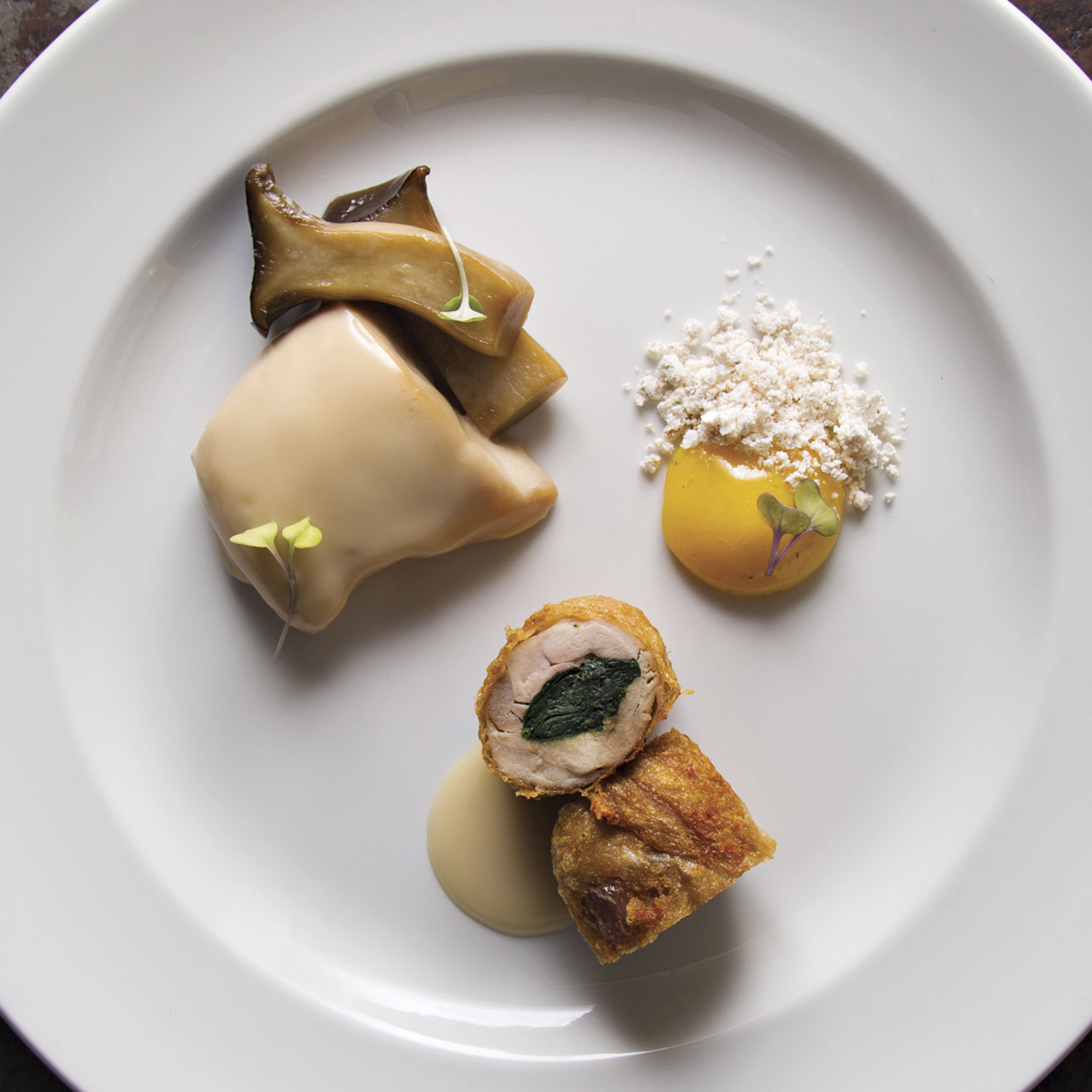 That distinction would probably fall to the veal cheek “saltimbocca,” a deconstructed and vaguely molecular take on the classic Roman dish, which often consists of veal cutlets wrapped with prosciutto and sage and cooked in buttery wine sauce. At Atlas, it’s manifested as a triangle of melty veal cheek littered with chewy candied prosciutto and brown butter powder, an umami bomb sitting atop a sweet puddle of butternut squash sauce. Also on the plate: a single butternut squash-filled tortelloni garnished with crisp, earthy sage leaves, a thick butternut purée that tastes of baking spices, and a prosciutto and butternut squash roulade that pits salt and sugar against one another in the best possible way.

You wouldn’t think chicken could possibly compete, but for a third course, Oppold poaches boneless Jidori chicken breast (the Wagyu beef of the chicken kingdom) and paints it with lustrous pheasant velouté, one of the five original “mother sauces” of French cuisine. It’s an old-school touch that completely charms me.

New Zealand venison strip loin, crisped at the edges and nested in a puddle of black pepper demi-glace, is more straightforward but just as wonderful, accompanied by a perfect brined potato plank, pommes mousseline (French mashed potatoes, loaded with butter and cream) and a pungent, blackened boiler onion.

Desserts are not included in the basic fare, but you shouldn’t miss them – particularly powdered-sugar-dusted petite beignets, sided with Ethiopian coffee crème Anglaise for dunking, and an elegant dark chocolate torte, studded with local pecan toffee, that hearkens back to fancier times.

When all is said and done, dinner for two at Atlas – wine excluded – settles in at around $200. I’m not a rich NorCal elitist, but I am telling you: This is fine dining without the pretense, and it’s a steal. 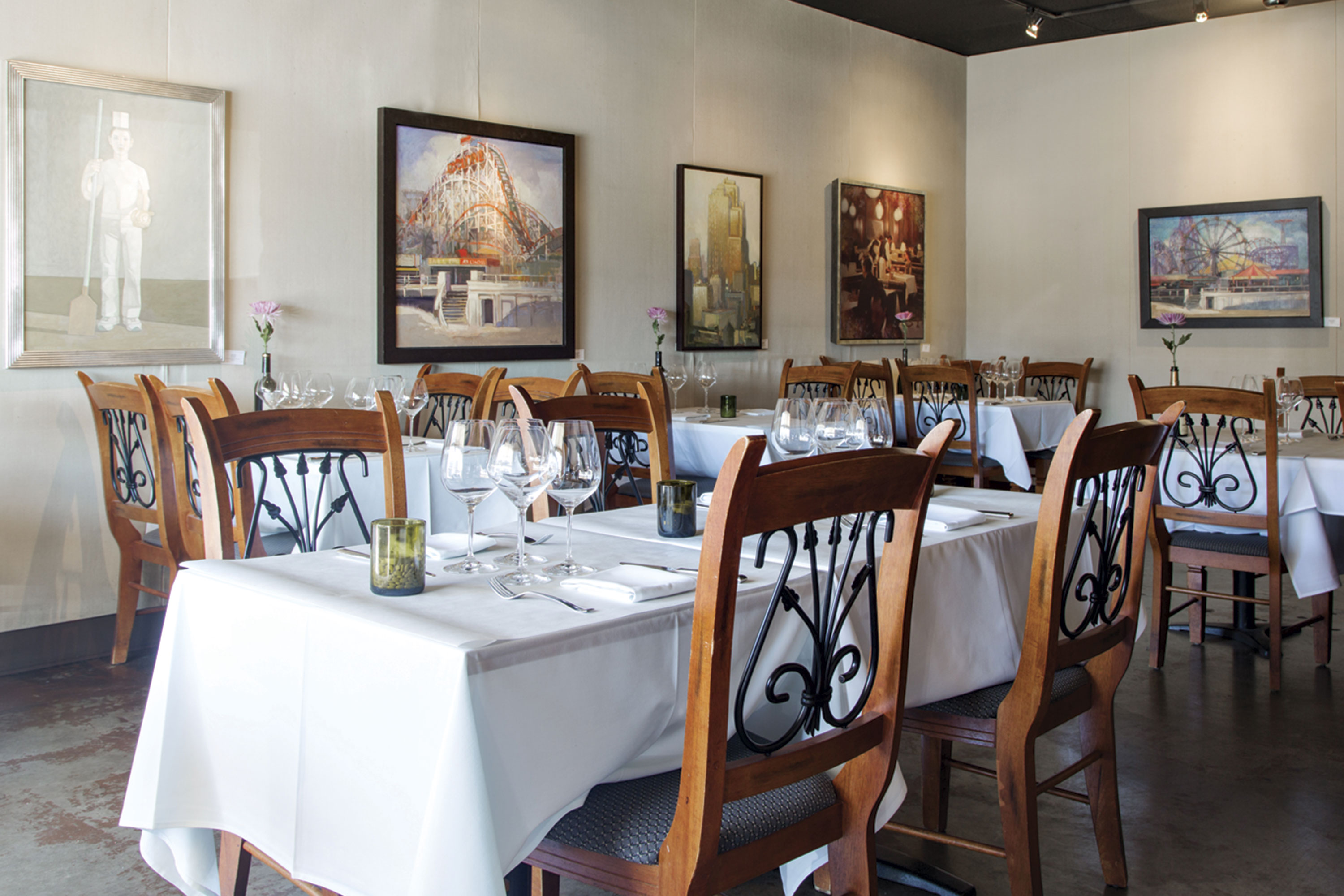 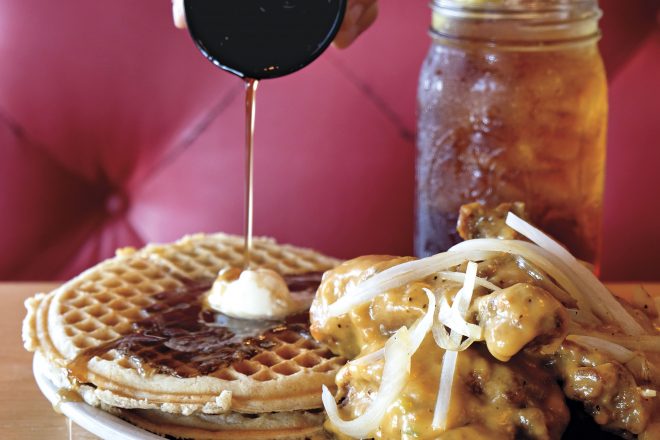