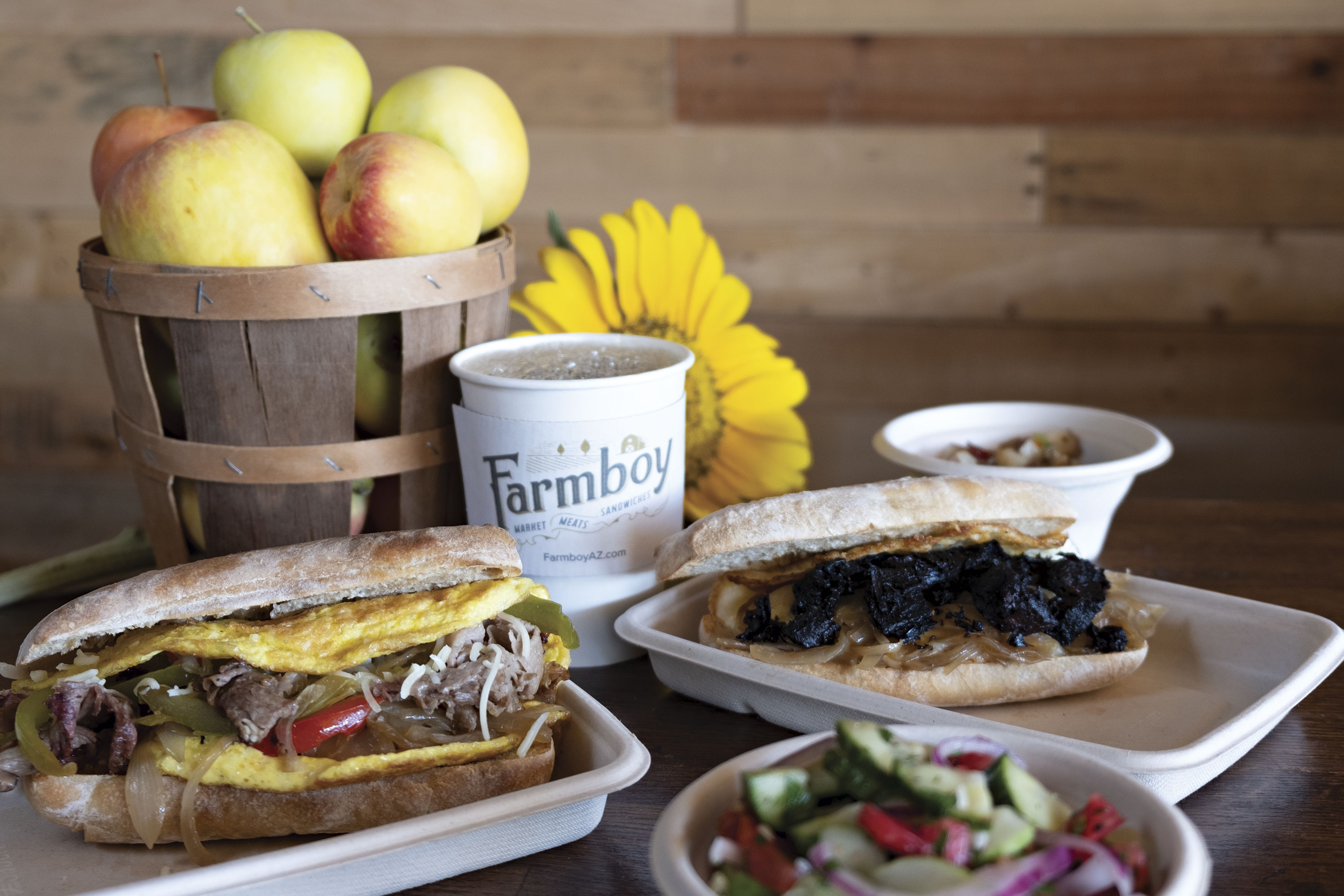 Steak and egg sandwiches with tomato-cucumber salad, potato-veggie hash and coffee at Farmboy in Gilbert

Not all the Valley’s great restaurants fly above the radar. Culled from years of food-scene research, these stealthy culinary standouts deserve a visit this fall.

Why It’s “Secret”: A longtime favorite of pho fans in the know when it resided in a seldom-trafficked corner of Christown Mall, this family-run Vietnamese bistro became only slightly more visible to the Valley masses when it moved to a quiet cottage in historical downtown Glendale in 2006.

What Makes It a “Gem”: The pho is great, yes – aromatic, scratch-made and frequently imbued with specialty meats like oxtail – and so are the tangy rice vermacelli salads, known as bun (pictured). But it’s the lesser-known, old-world Vietnamese staples that make us throw down for Little Saigon. Owner-chef-matriarch Nu Pham is particularly deft with noodles. Case in point: mi xao mem, featuring fat, supple egg noodles (xao to the Nguyens of the world) lacquered in a broodingly sweet soy-and-ginger glaze with a savory retinue of meats and vegetables; and banh hoi, a rare treatment of rice vermicelli in which the noodles are threaded into patties and lightly fried, then garnished with grilled meats, shrimp paste and intense little Vietnamese sausages. And don’t get us started about the hot pot dishes, also known as canh – impossibly delicious singularities of flavor so dense, even the “oooh” from your mouth can’t escape. 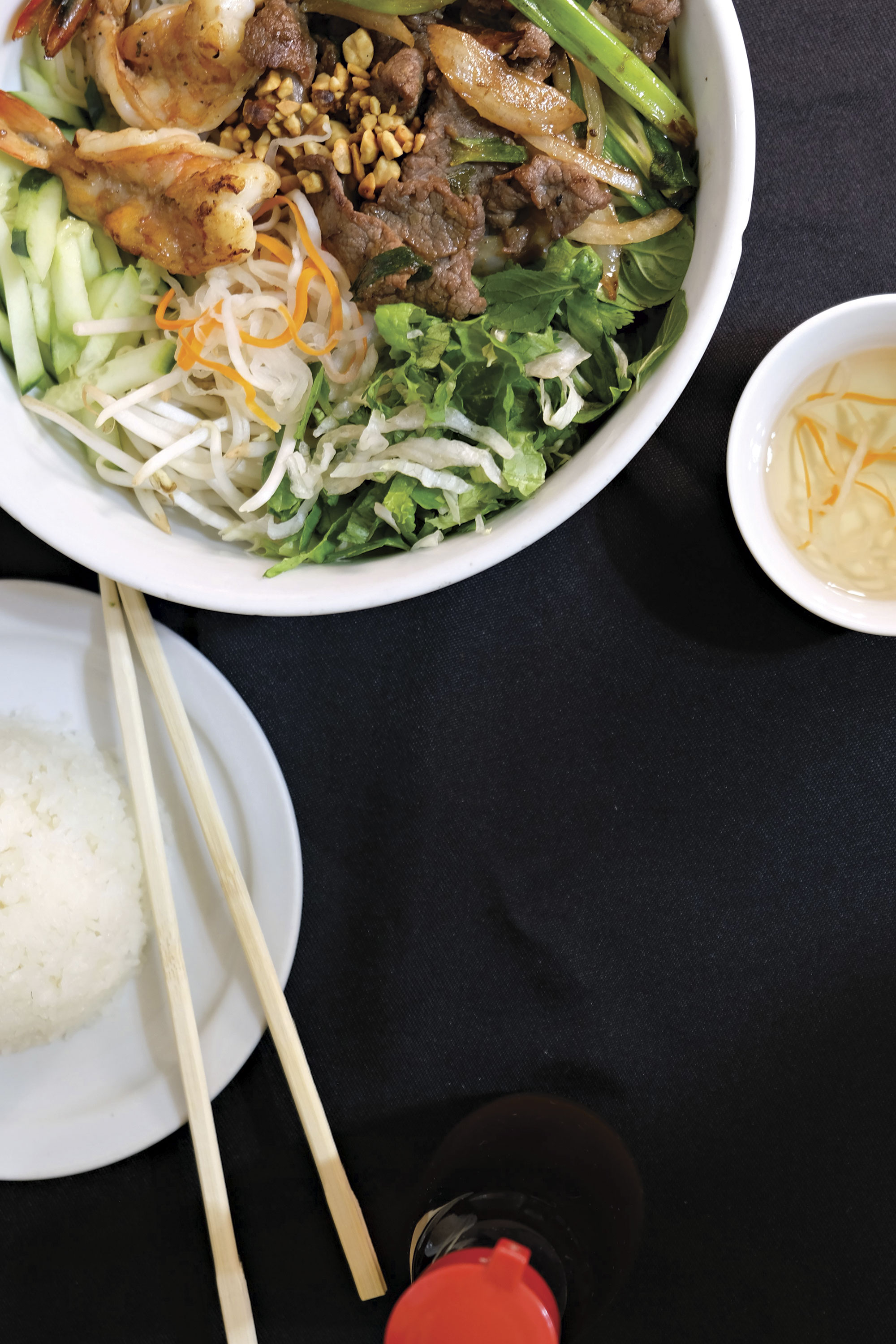 If You Get One Thing: The mi dac biet kho (No. 19), an intriguingly mislabeled “soup” that’s actually egg noodles (slender this time) heaped with pork, shrimp, squid and bun cha (fish meatballs) with a dizzying crown of aromatic sprigs and artfully toasted, crispy flat noodles for texture. And, yes, a pleasant little vegetable soup is served on the side.

Why It’s “Secret”: Golfers and Biltmore area residents have known for decades that The Adobe Restaurant at the Arizona Biltmore Golf Club is where it’s at for scratch-made food that rises mightily above the golf course snack bar stereotype. The rest of us are just now realizing we can pop in for a gourmet breakfast or lunch without a tee time or an 85016 address.

What Makes It a “Gem”: Oh, it’s just the home of the best pancakes in the world. “In the world?” you ask skeptically. Yes. The Chip S’Hot Cakes are made with the usual suspects – buttermilk, eggs, flour, baking powder, salt, etc. – but in a golden-brown ratio we mere mortals can only guess at. The batter is deftly and speedily mixed to preserve aeration, yielding the lightest, fluffiest cakes we’ve tasted, with a custardy richness and a faint maltiness. 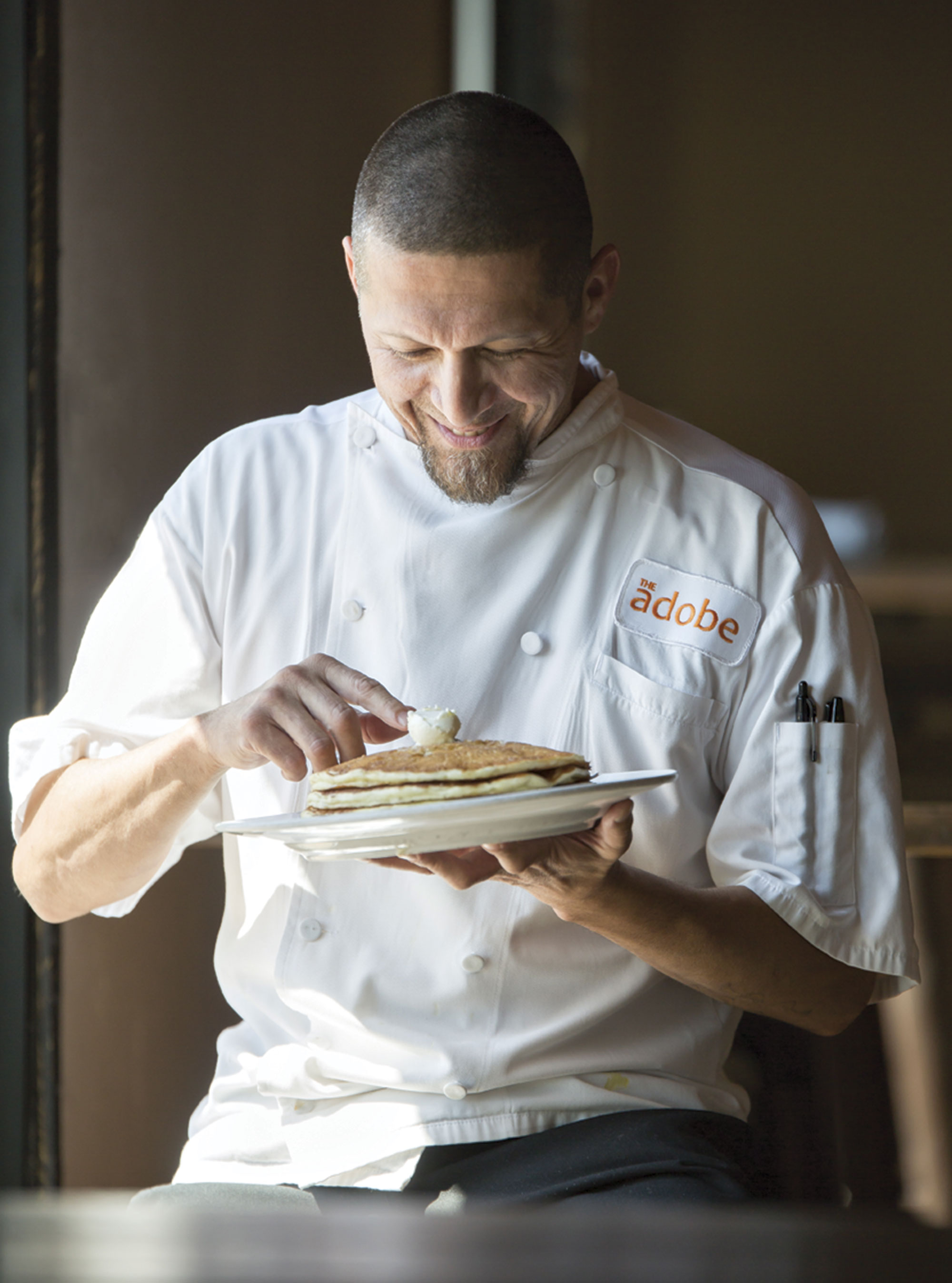 Gussied up with butter and real maple syrup, they make all other pancakes taste like old sponges. You can get them with blueberries, but why mess with perfection? The Adobe got a revamp in July, so you can enjoy your heavenly hot cakes under the hand-painted ceiling of what was originally the Wrigley Mansion’s barn (circa 1929). Bonus: If you walk or ride your bike to your meal, you get 10 percent off your tab, and a loyalty program gives you a free meal after you purchase nine.

If You Get One Thing: The pancakes, of course. If you’re coming for lunch, the burgers are a sure bet, and the B.L.Tee (we see what they did there) comes with five full slices of crispy bacon, lettuce, tomato and house-made garlic aioli on toasted brioche. 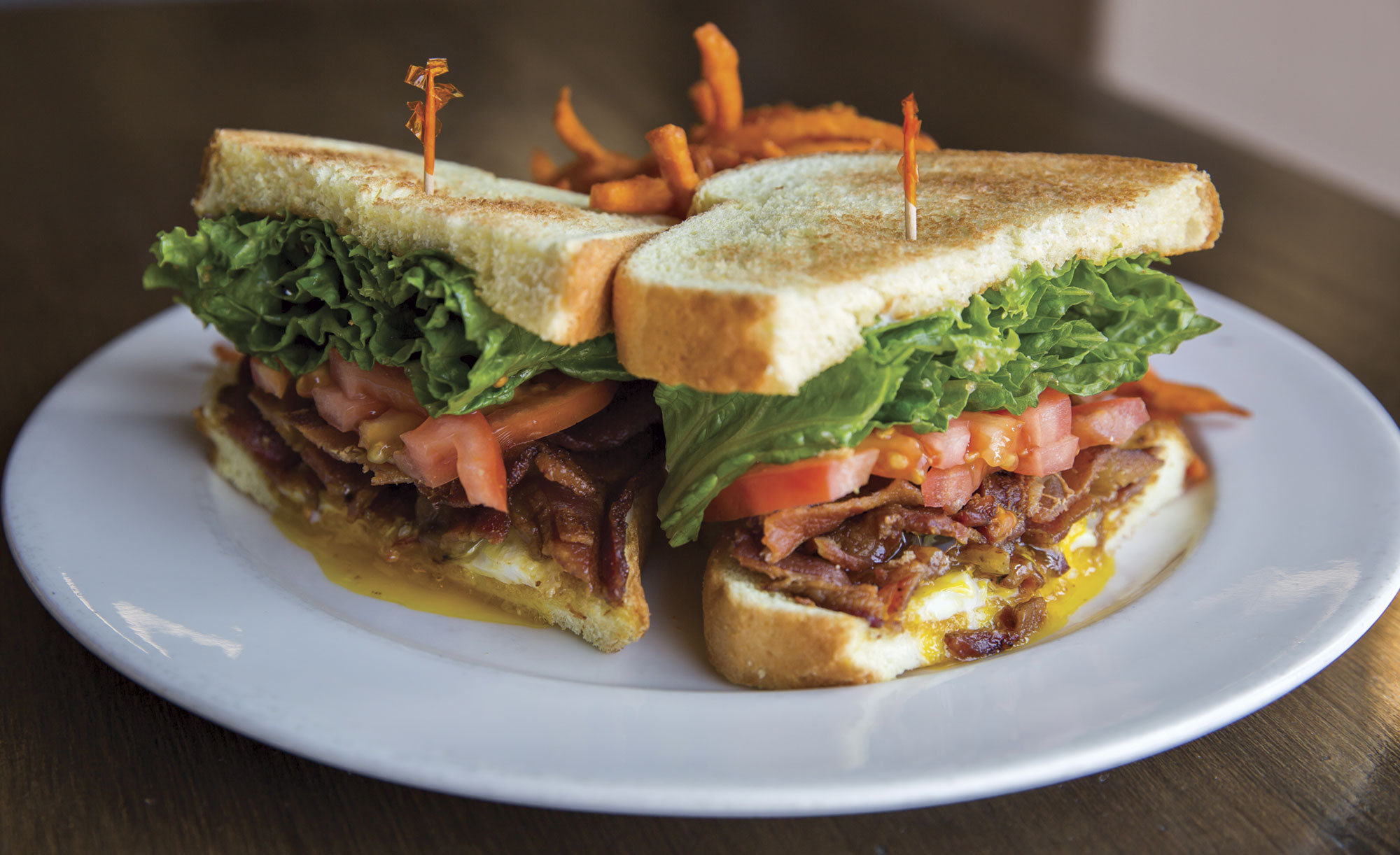 Why It’s “Secret”: The intersection of Cave Creek and Bell roads in North Phoenix is where you’d go to pawn something or buy a firearm – not where you’d look for a good meal. European transplants Arpad and Diana Domokos changed that in 2018 by opening Edelweiss Biergarten, a convivial watering hole and restaurant, in the building that last housed country dive bar the Wagon Yard.

What Makes It a “Gem”: With the Valley’s largest selection of German beers, it lives up to its biergarten moniker. The true draw, though, is Diana’s lovingly prepared food. She draws on her Hungarian heritage and her husband’s German lineage – often using recipes from their mothers and grandmothers – to churn out dishes of tender chicken paprikash, tangy rinderrouladen, crispy schnitzel and juicy knockwurst. 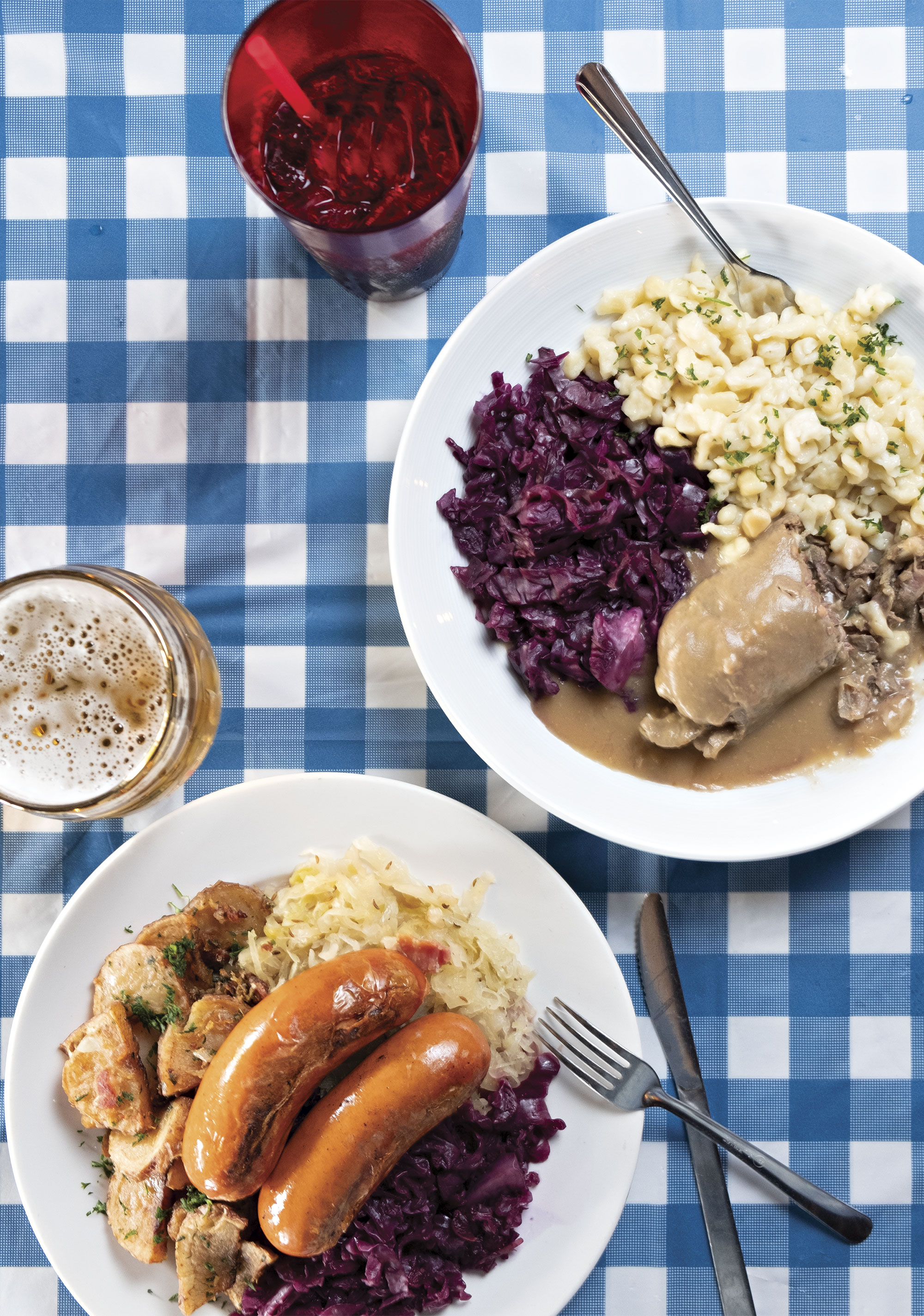 Weekly specials like käsespätzle (think German mac and cheese, with the eggy pasta spätzle draped in cheese sauce and caramelized onions) keep regulars coming back for more. The Budapest salad may be an acquired taste for non-Hungarians, but devotees love the mixture of boiled eggs, peas, carrots, apples, dill pickles and potatoes in a creamy mayonnaise-mustard dressing.

If You Get One Thing: Pick any sausage or schnitzel – we’re partial to the smoked bratwurst and the hühnerschnitzel, a thin, crispy chicken breast crowned with velvety garlic sauce – and follow it up with the sour cherry soup, a creamy, tangy, tart, sweet and spice-rich soup served cold with whipped cream. 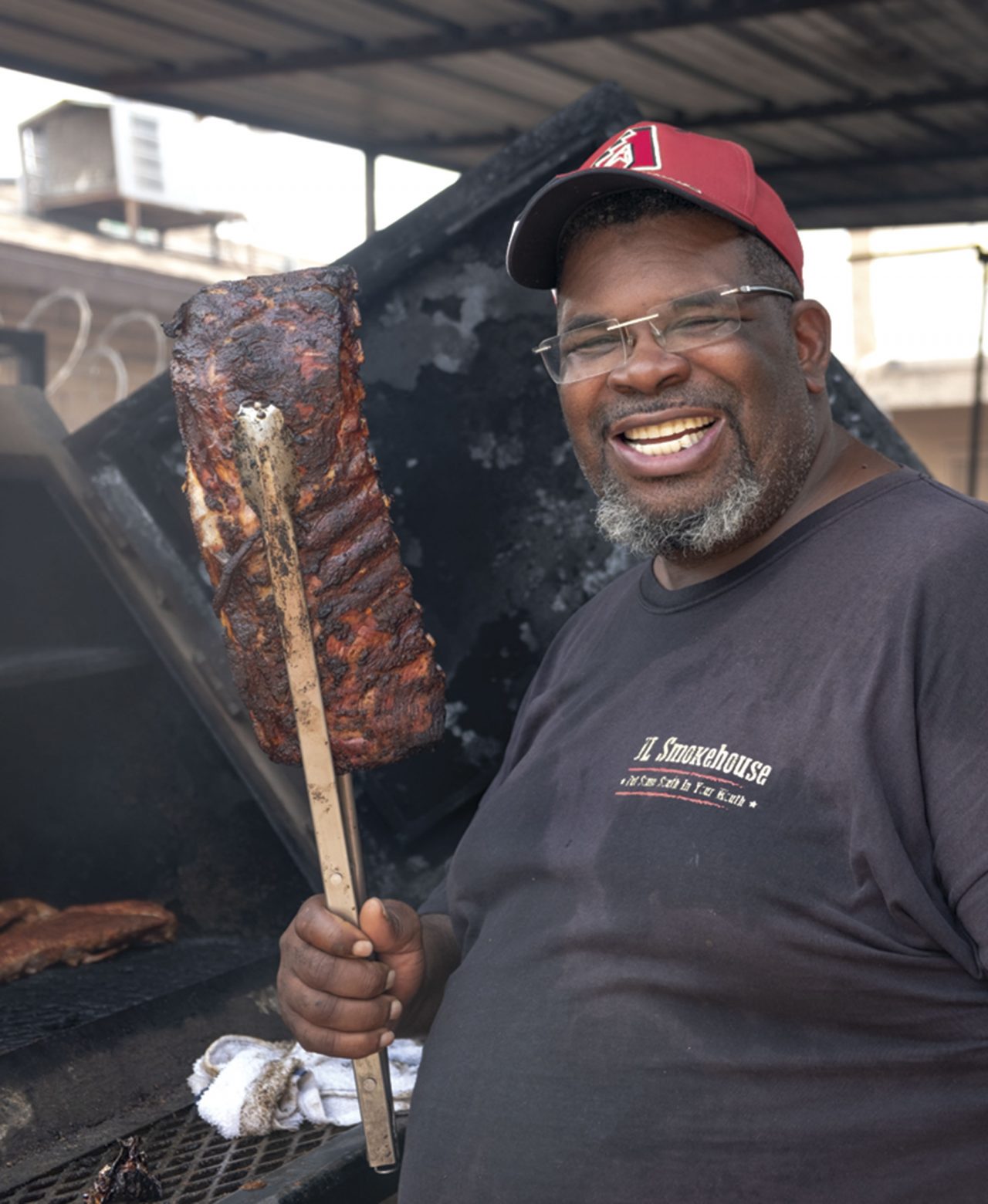 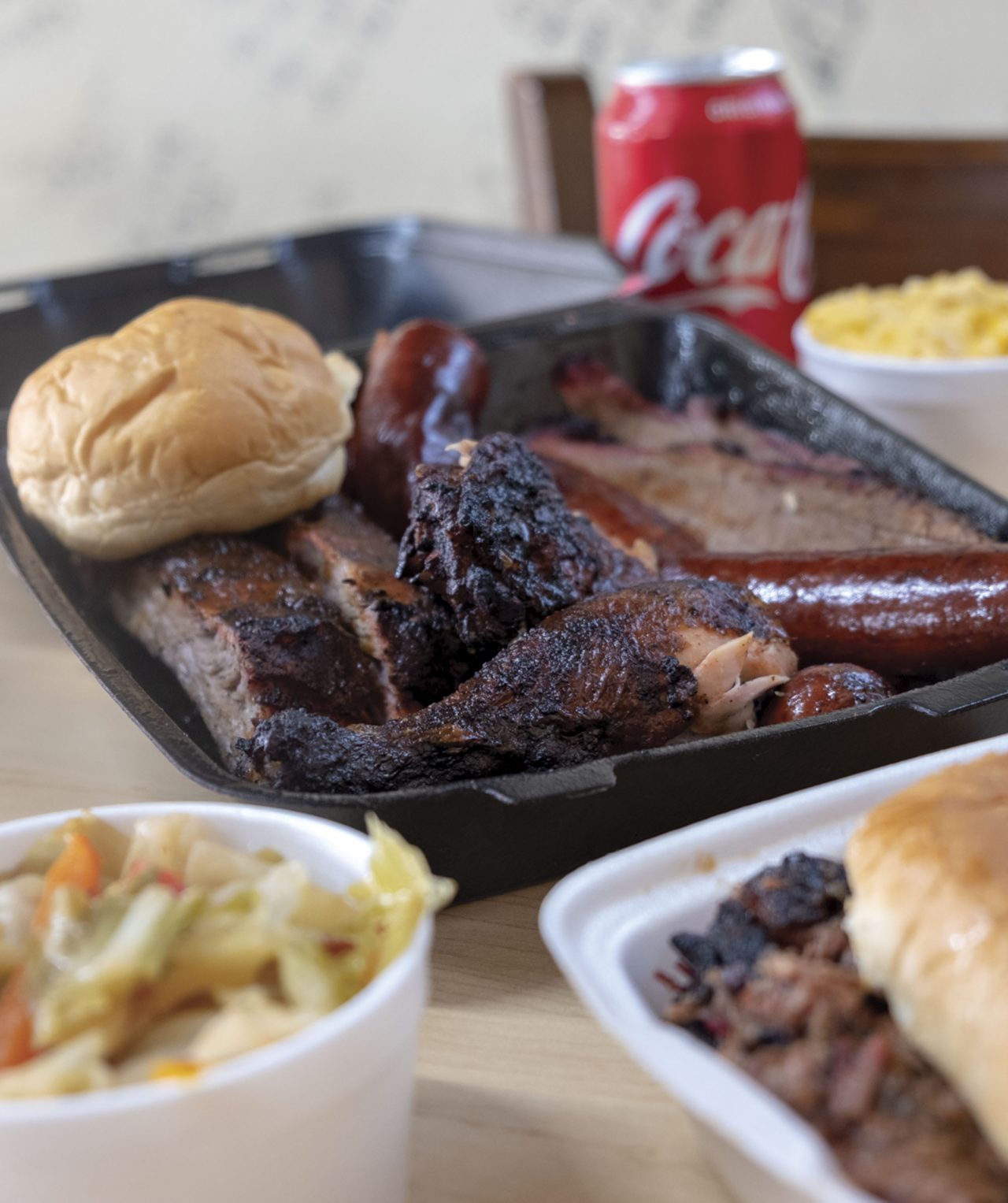 Why It’s “Secret”: We’re in the midst of a barbecue boom in the Valley, and it’s sometimes difficult to hear above the noise generated by ’cue queen Little Miss BBQ. This scrappy upstart by pit master James Lewis opened in 2017 but made it onto our radar this year with its promise to “Put Some South in Your Mouth.”

What Makes It a “Gem”: Arkansas native Lewis takes a freewheeling, classification-defying approach to barbecue. There are elements of Tennessee (the sauce), Mexico (the cilantro rice) and even Chicago (the smoked bologna and hot dogs). The defining element of all of JL’s meat, from pulled pork to beef brisket, is smoke. Lewis hits his meat with a fiery blast of oak and mesquite smoke that starts high and then goes low, eschewing the “low and slow” dictum of most of his compatriots. On the table, smoky meat juices intermingle with the light, vinegary sauce to make a primal dressing. Call it ’cue confit. Even the mac and cheese has a smoky element, with a smoked Gouda-enriched sauce. We have a new motto for JL: “Must Love Smoke.”

If You Get One Thing: The smoked bologna is a must-order for the novelty alone, but it’s actually delicious, especially if you love the interplay of salt and smoke. Of course, no meal at a barbecue joint is complete without brisket and pulled pork, which here are assertively peppery and, you guessed it, smoky.

Why It’s “Secret”: This farm-focused eatery is situated at a busy south Chandler intersection, but its strip mall space is obscured by a bank and a salon. It didn’t help that the strip mall was mostly empty when Farmboy opened last year.

What Makes It a “Gem”: “Farm-to-table” has become an almost meaningless cliché when describing restaurants, but Farmboy truly is a locavore’s dream. Almost everything is grown, harvested and processed here in Arizona. Pork from The Meat Shop in Phoenix and beef from Arizona Grass Raised Beef Co. are smoked on-site over Southern Arizona pecan – although Farmboy adamantly steers clear of calling itself a barbecue joint – and almost all the produce comes from local farms, including owner Oren Molovinsky’s 3 1/2-acre urban farm in Gilbert. Breads and rolls are baked in-house using Arizona-grown Blue Beard Durum milled by Hayden Flour Mills in Queen Creek. Can’t make it to a farmers market this weekend? Farmboy offers a small retail section of local eggs, seasonal produce and sometimes meats to go. 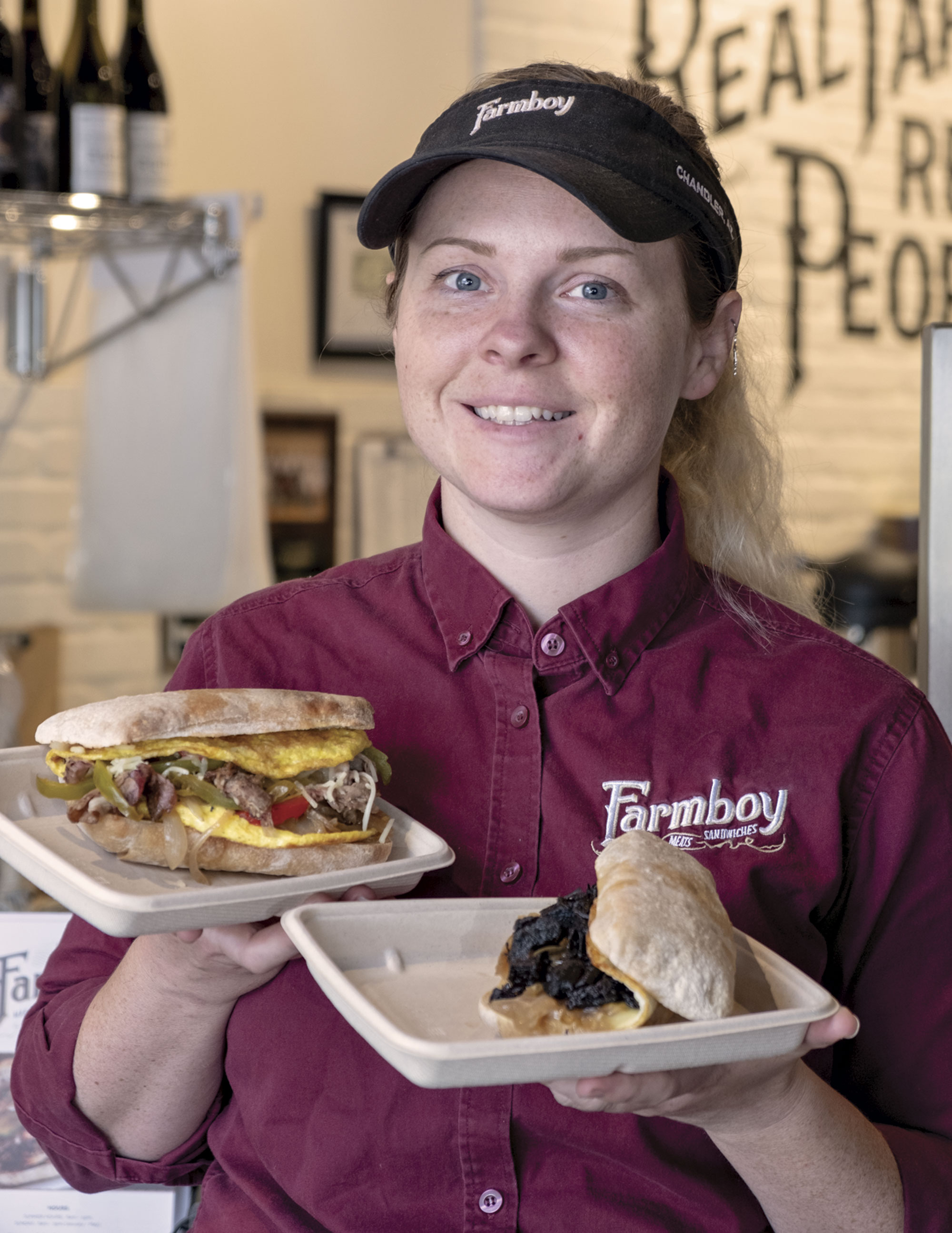 If You Get One Thing: The Ocotillo barbecue pulled pork sandwich, featuring pork from The Meat Shop owner Tim Wilson’s pig farm near Buckeye, is the go-to menu item. Dressed with dill pickle chips from Mrs. Klein’s Pickle Co. in Phoenix and a barbecue sauce house-made from locally grown heirloom tomatoes, it’s served on a Sonoran wheat sourdough roll. 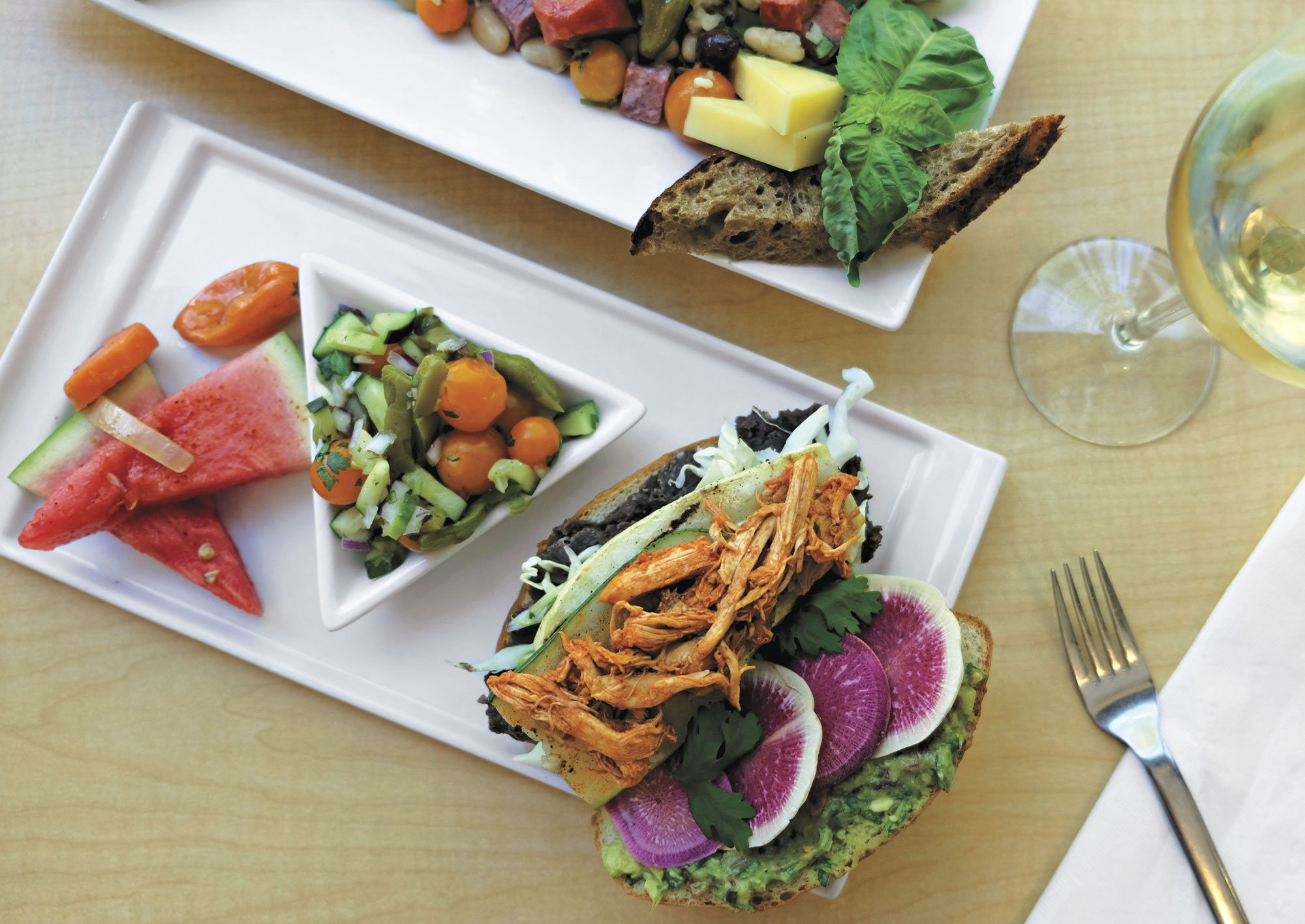 What Makes it a “Gem”: Daily blackboard specials and menu mainstays from Executive chef Chris Lenza that reflect the acclaimed museum’s robust global perspective. One recent lunch began with an enticing, turmeric-tinged beef curry soup, followed by a banal-sounding “European chopped salad” that turned out to be one of the most remarkable vegetarian dishes we’ve had in the Valley, a gala of pickled carrots, roasted squash and more, with a fun, tart swipe of mincemeat for contrast. Named Best Locavore Restaurant by PHOENIX magazine in 2013, Allegro also boasts one of the Valley’s most rigorously Arizona-centric food programs – Two Wash Ranch chicken, Schreiner’s sausage, greens from Blue Sky Farms and more make frequent appearances on the menu.

If You Get One Thing: The best items are specials and therefore ephemeral and difficult to forecast, but know one thing: The smoothies at Café Allegro are things of fastidious beauty – massive and marbled with fresh, locally sourced fruit. 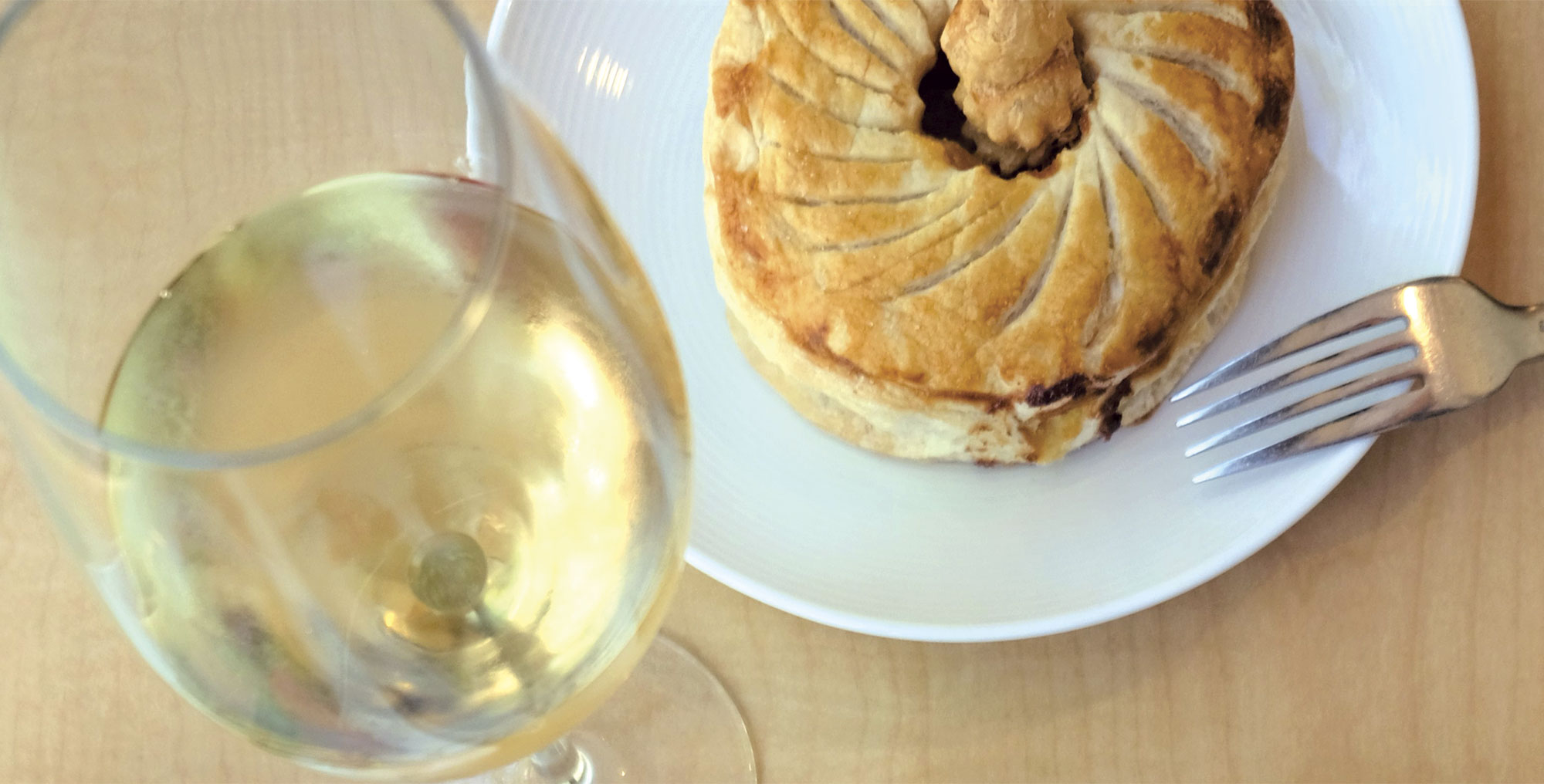 Why It’s “Secret”: Though it’s one of JW Marriott Phoenix Desert Ridge’s six dining outlets, MERITAGE is tucked away in a corner detached from the rest of the resort. Adjacent to Wildfire Golf Club, it’s a short jaunt for golfers seeking to recover from a long game, but otherwise it’s a bit of a scavenger hunt. Pro tip: Follow signs for Wildfire.

What Makes It a “Gem”: For a clubhouse restaurant, MERITAGE is daringly expressive and unorthodox – a fact that’s reportedly caused some grumbling among the duffers, but will delight foodies. Inspired dishes include a marvelous mezze platter, delicious diver scallops, sumptuous seasonal desserts like peach crème brûlée and unconventional cocktails like the Swim N Tonic – a lavender-hued twist on the traditional gin and tonic. Through it all, chef de cuisine Dejan Djukic says it’s the upscale but approachable atmosphere that sets MERITAGE apart. “[We strive for] modern presentation and very bold flavors, but at the same time I like to see people feel comfortable… I just like to see families come in and have a great time,” he says.

If You Get One Thing: Djukic kicks the classic summer salad up a notch with his inventive tomato burrata dish, which combines cloud-like burrata, crisp bell peppers, succulent kumato tomatoes and fresh greens from the property’s herb garden. Served on a translucent glass plate, the salad incorporates dry ice to evoke a smoky, ethereal epicurean experience. 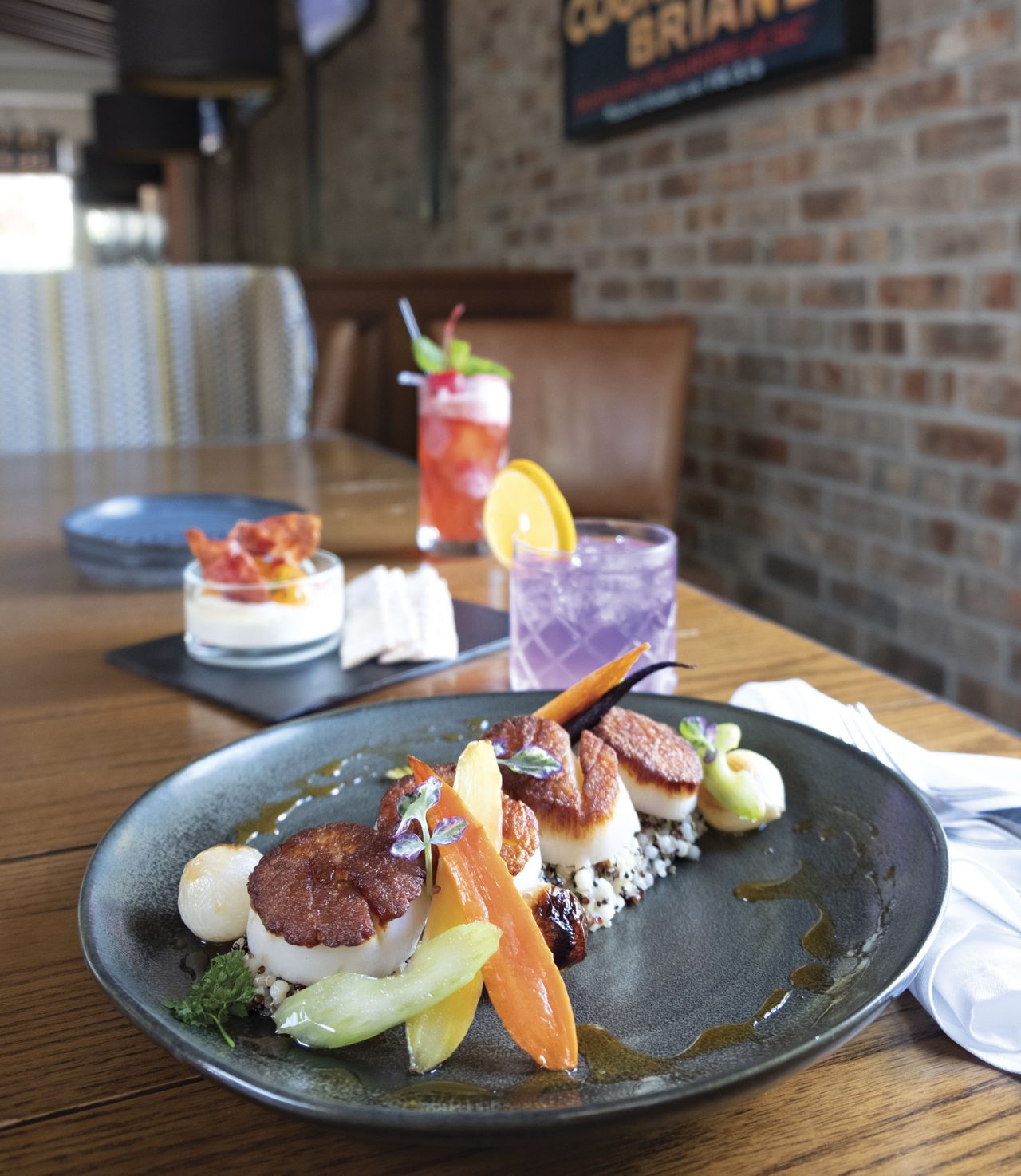 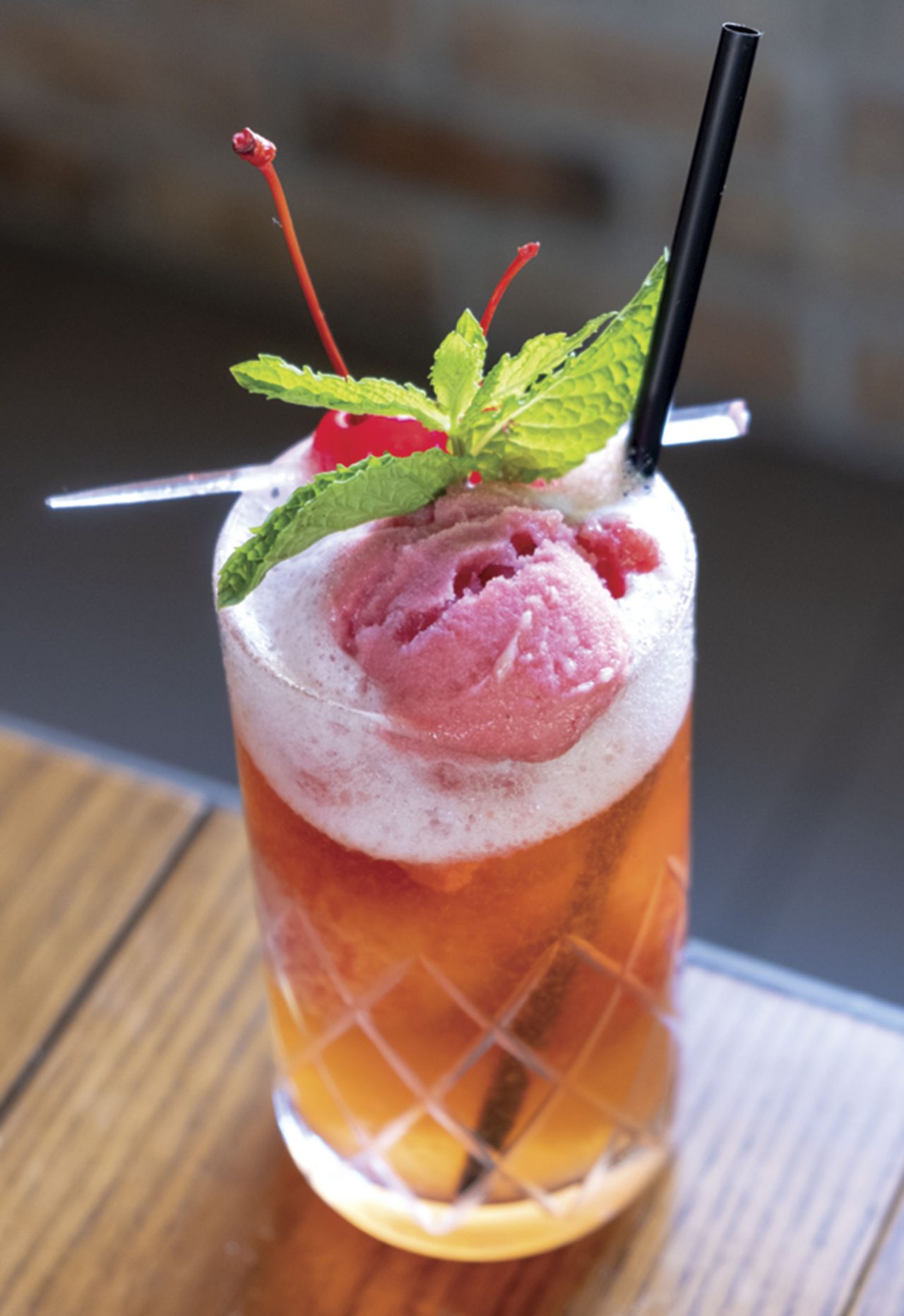 Foodie finds at gas stations? You bet your unleaded. Though common in barbecue bastions like Texas, service-station cuisine is brave new culinary territory in Arizona, where a handful of gems float in a sea of beef jerky and stale nachos.

Hot dogs at gas stations are nothing new, but these puppies – served next to the Chevron convenience store at Bell Road and 51st Avenue – are a few steps up from hot dog roller fare. Try the Mac Attack, with mac and cheese and bacon; or the Banh Mi, with cucumber, carrots, cabbage, jalapeño, cilantro, peanut sauce and crushed peanuts.
5060 W. Bell Rd., Phoenix, 602-900-5059, doglicioushotdogs.com 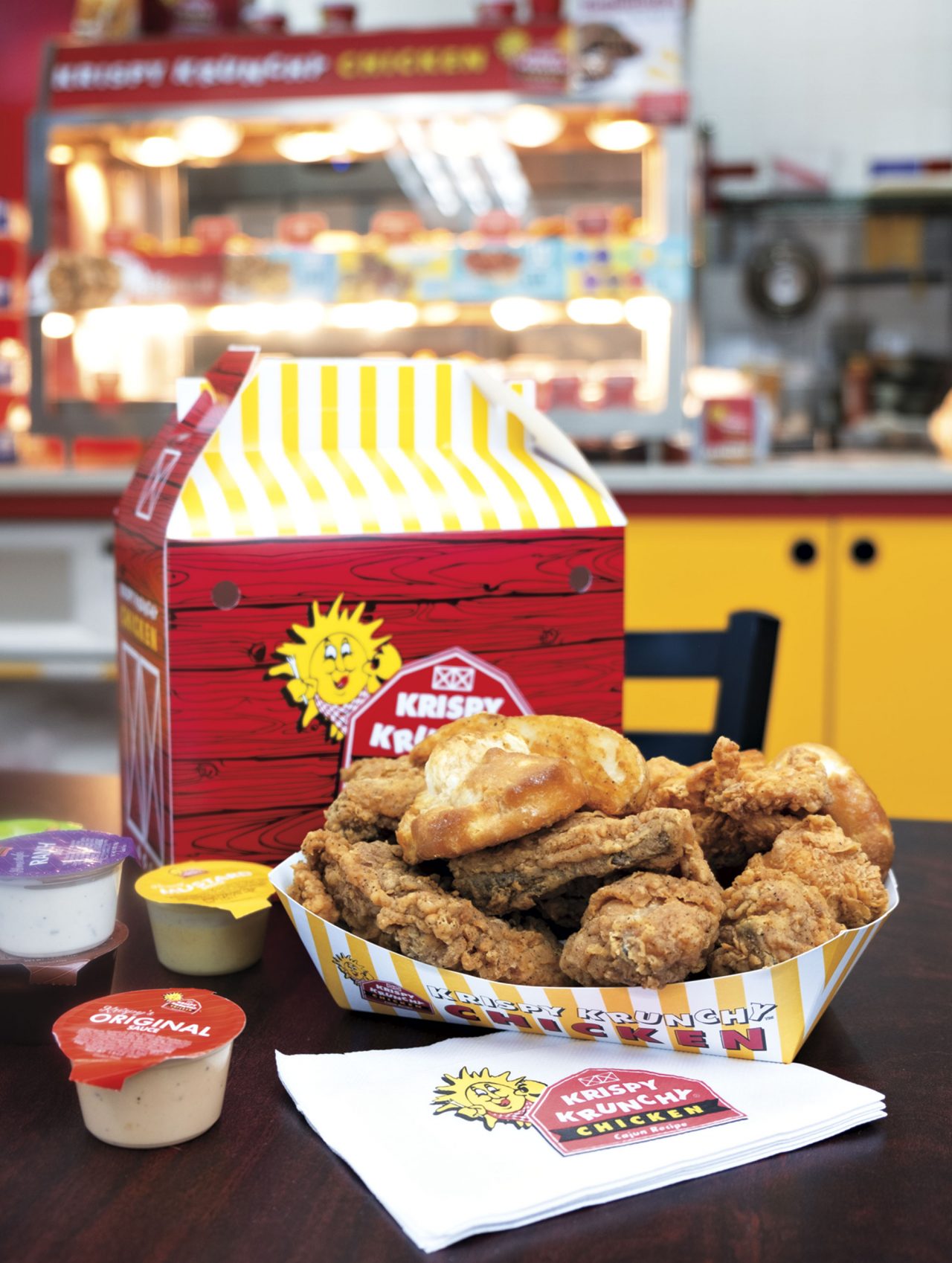 Set in a Peoria Shell station, it serves the best falafel in the Valley. Start with the falafel plate ($7.50), featuring a ring of flawlessly fried little chickpea fritters, hearty but not heavy, dense or dry, as the dish is wont to be, along with salad and fries. The beef saj plate ($12), partnering the meat with yummy hummus and red peppers in a tortilla-like wrap, is a fine hunger-vanquishing dinner option, and you can grab a bag of take-home falafel mix in the bargain.
6730 W. Cactus Rd., Peoria, 623-979-9234, facebook.com/casadefalafelrestaurant