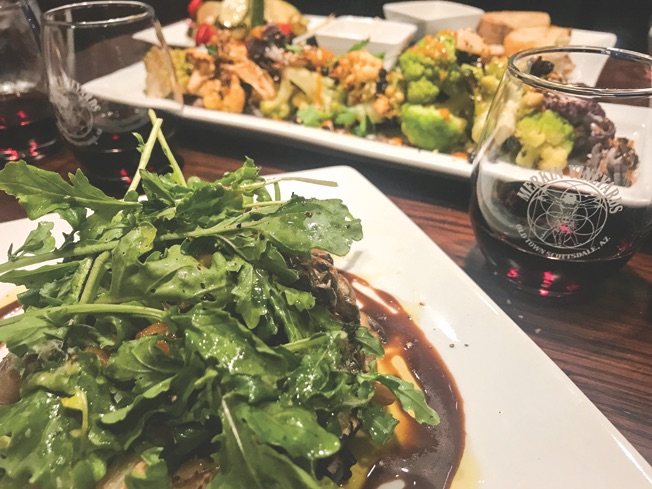 It’s the softest of invasions: the recent wave of Arizona wineries setting up tasting rooms in the Valley. We visited this nifty Old Town osteria a few weeks after opening, excited to sample Jerome winemaker Maynard James Keenan’s mineral-forward wines and catch his gonzo-poet panache.

THE SCENE
Merkin occupies one of the three Stetson Avenue spaces vacated after the collapse of Peter Kasperski’s Cowboy Ciao empire, and it has a storied history – two James Beard Award winners (Nobuo Fukuda, Charleen Badman) and a mixology legend (Jason Asher) previously ran restaurants there. On a weekday evening, the large wraparound bar that dominates the restaurant is about half full.

THE FOOD
Vegetable fans will be pigs in you-know-what. Sourced solely from Arizona, veggies dominate the tight, fairly priced menu, from the technicolor roasted cauliflower with vindaloo and Madeira raisins ($9), to a simple plate of pickles ($4). For carnivores, there are two proteints – on our visit, one was pork belly with smoked ricotta and stone fruit ($15), with just the right crisp and fat. But why go there? Order Noble bread ($5), one of the $5 cheeses, the cucumber and chiles plate ($6), and a glass of Malvasia Bianco orange, and live until you’re 102.

THE VERDICT
It’s pretty much perfect. We just hope its epicurean restraint doesn’t go unappreciated in the Town That Dos Gringos Built.