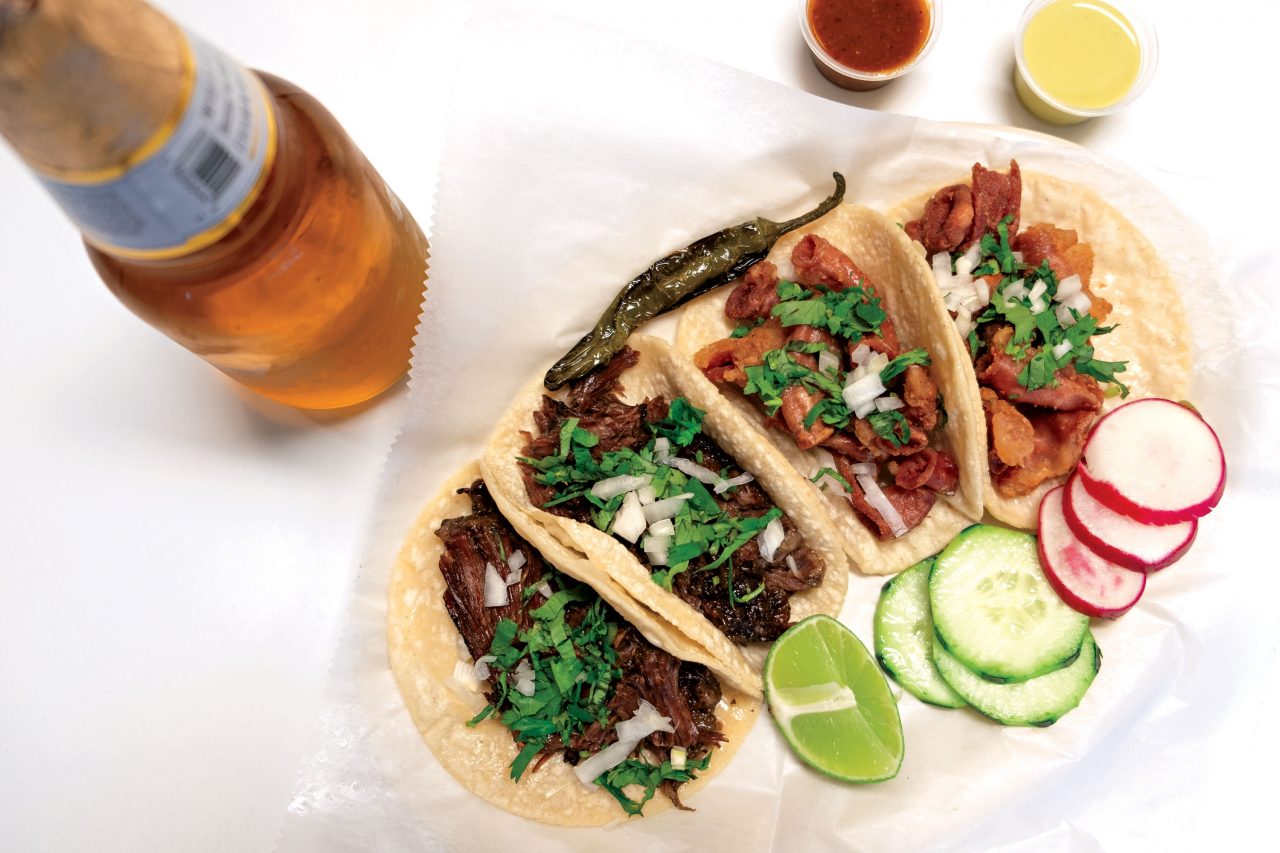 Congratulations, taco fan – you live in the Valley of the Sun, which is for all intents and purposes the Ivy League of everyone’s favorite hand-borne Mexican food staple. From savory, cilantro-flecked street tacos to $10 seared pork belly masterpieces, your semester in Taco Town, USA, begins now. 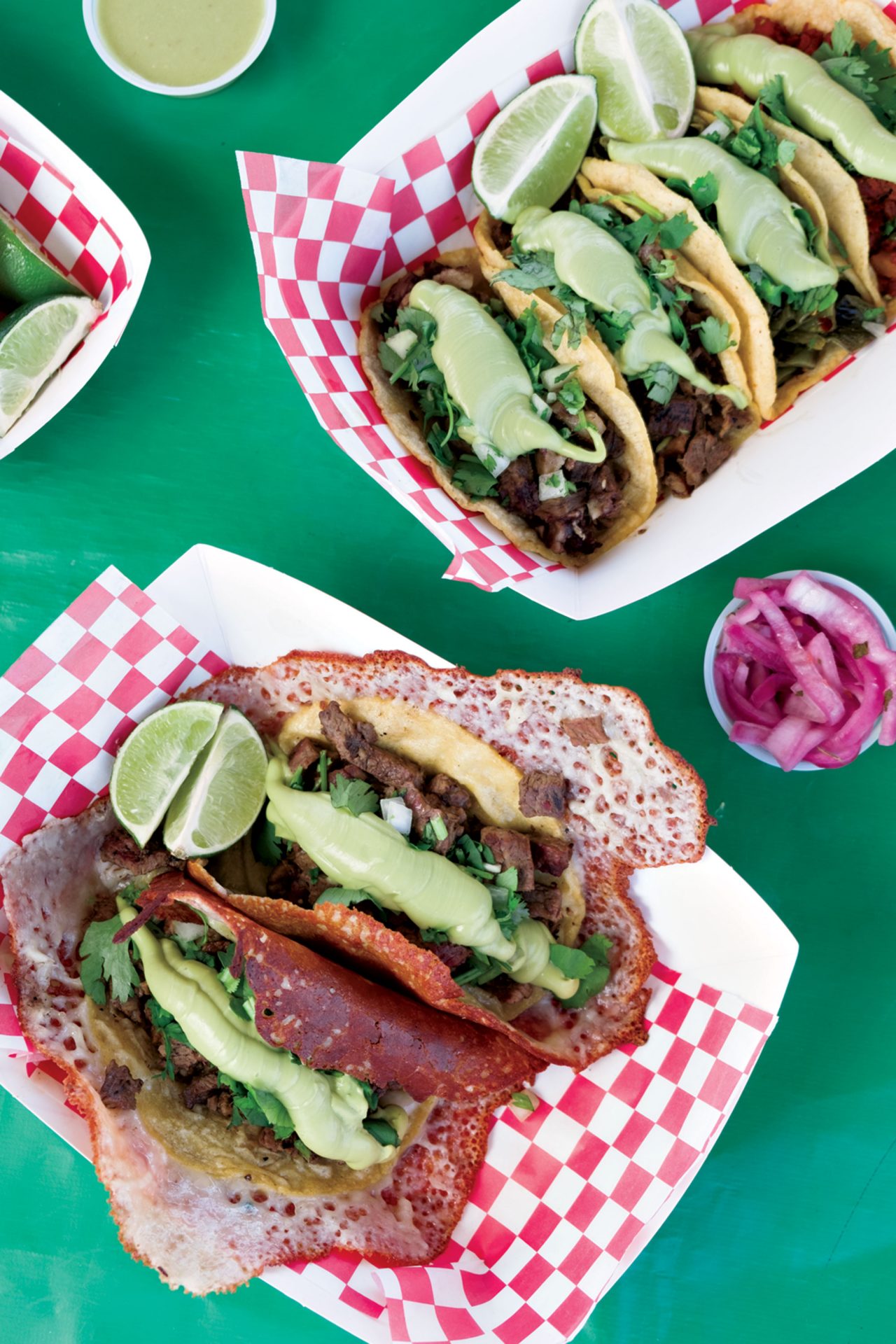 Joe’s Tacos
7410 W. Olive Ave., Phoenix, 623-206-3976, facebook.com/joestaco
This bright red taco truck is famous for its toasted tacos, a crazy-delicious cross between a soft taco and a cheese crisp – the cheese wrapped around a handmade corn tortilla and griddled to rich, Parmesan tuile-like crispiness. For any serious taco aficionado, it’s a must-try, and near perfect stuffed with Joe Sanchez Jr.’s Zacatecas-style lengua, braised until it achieves an unctuous, dreamily tender mouthfeel. Try the asada, pastor, nopales and cabeza tacos, then gild the cilantro-flecked, avocado-salsa-topped lily with lime, pickled onion and salsa ($2.50). 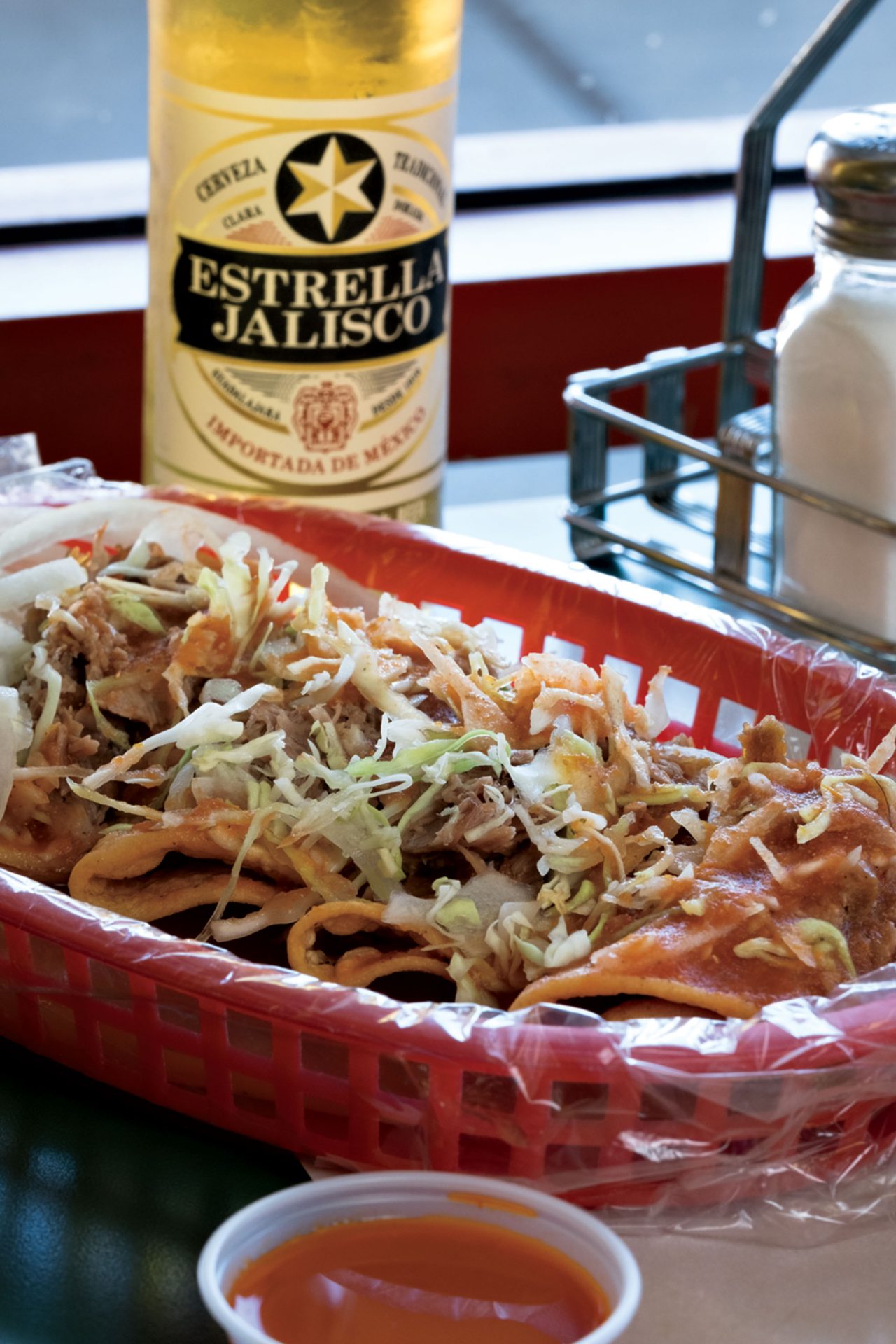 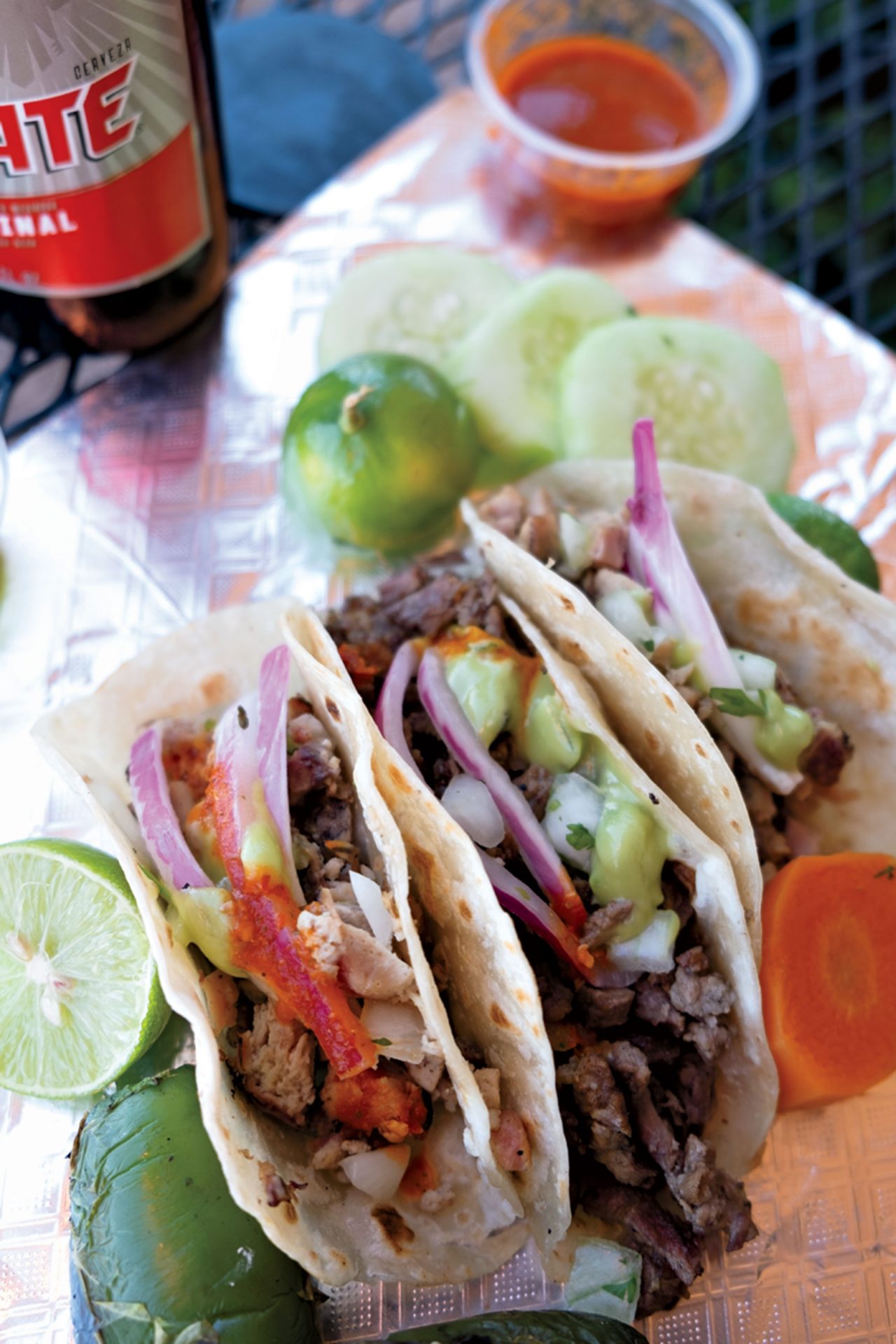 Gallo Blanco
928 E. Pierce St., Phoenix, 602-327-0880, galloblancocafe.com
The humble Baja-style fish taco goes upscale at Gallo Blanco, where chef-owner Doug Robson first merged the street taco with the Valley’s fine-dining consciousness more than a decade ago. His lightly battered fish – maybe halibut, rockfish, grouper or Corvina seabass – is invariably clean-tasting and flaky, and served “open-face” on a house-made blue corn tortilla, which lends a hint of sweetness and earthiness. It’s a crunchy mouthful of fish, cabbage, onion and tomato, jacked up with creamy chile aioli, and my favorite of its kind in the Valley. 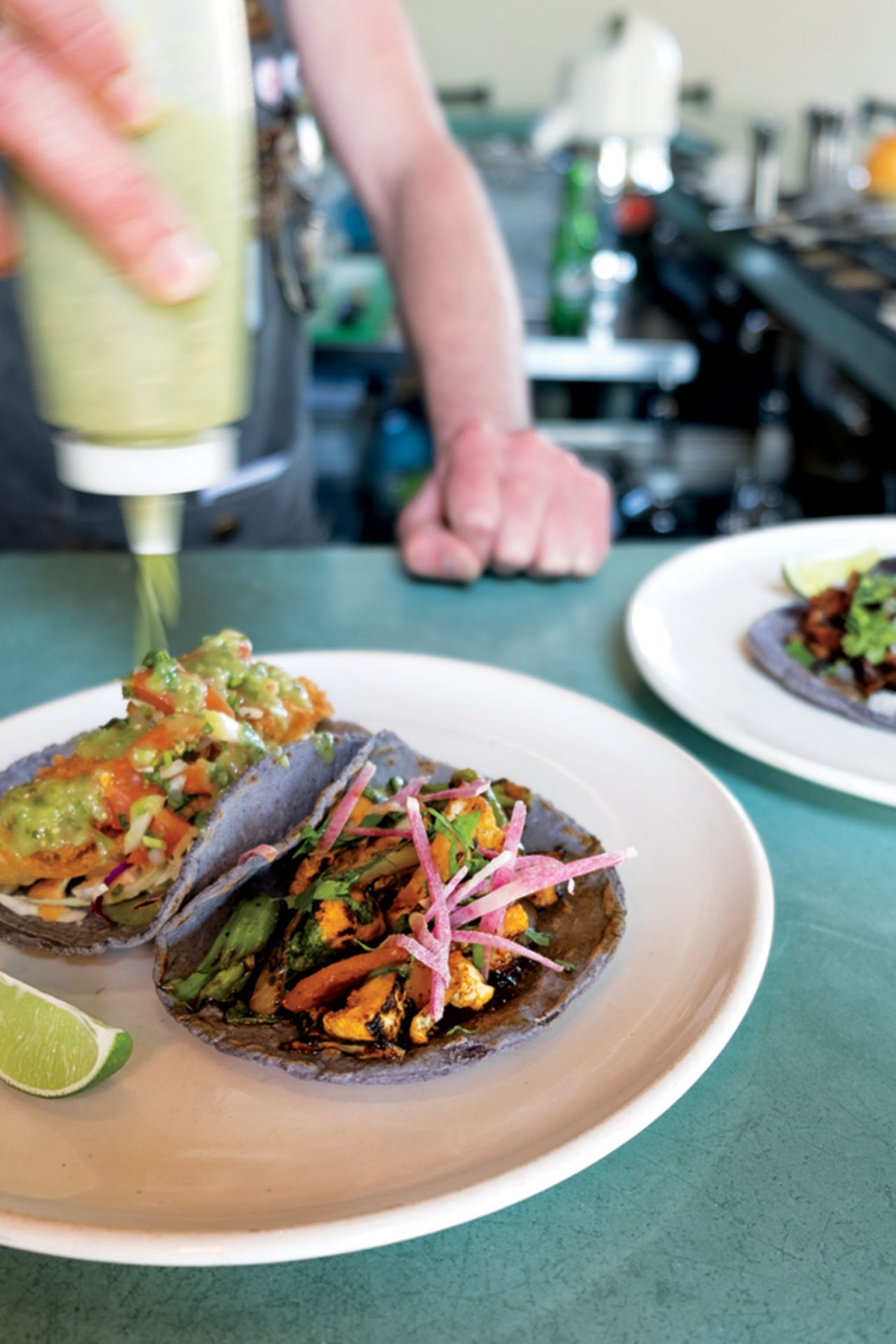 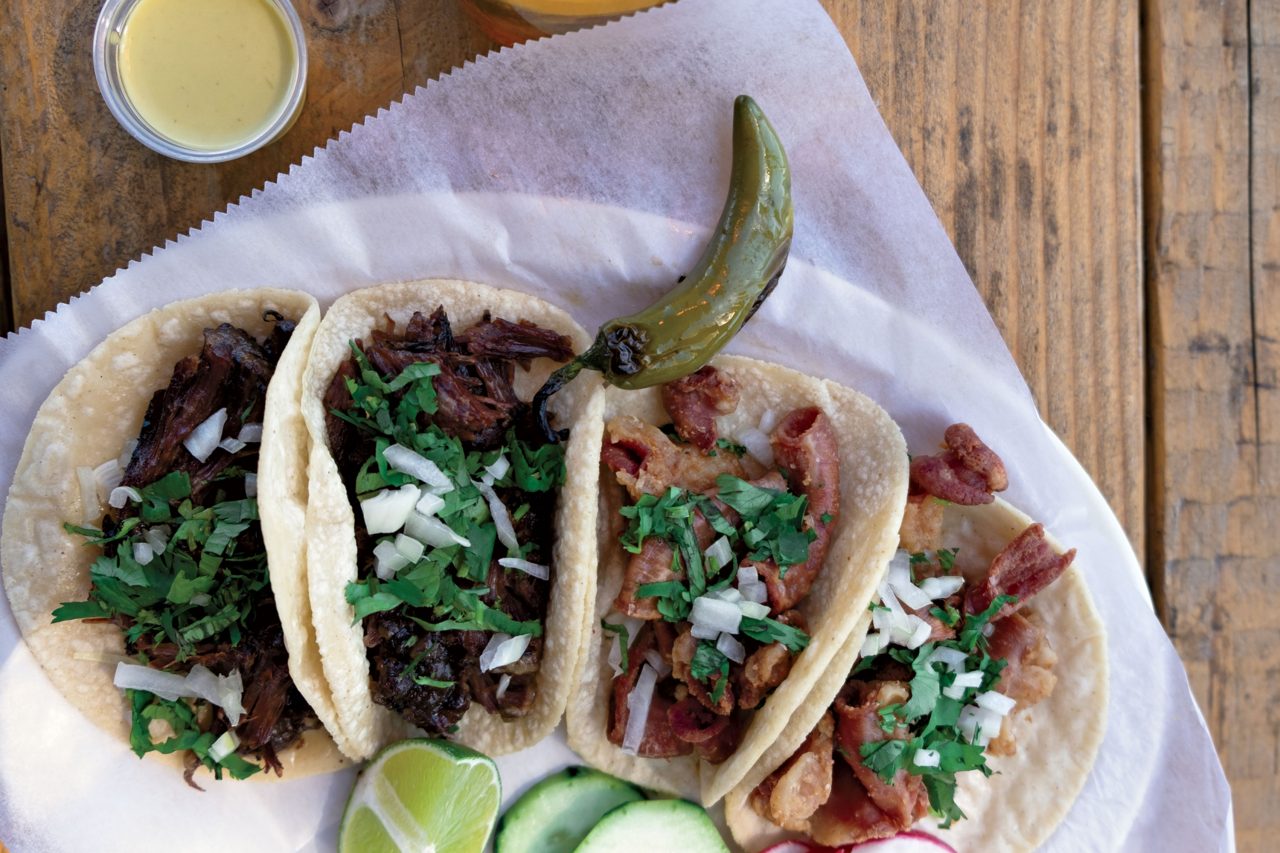 Tacos Chiwas
1923 E. McDowell Rd., Phoenix, 602-358-8830, tacoschiwas.com
Everyone touts a personal favorite at this popular Chihuahuan-style taco shop, which opened in 2016 and immediately became a favorite of the Valley’s culinary intelligentsia. But for my $2.50’s worth, it’s hard to beat crispy, feather-light and faintly chewy tripas – beefy-tasting small intestines that eloquently prove offal ain’t awful. Chiwas also boasts an elite barbacoa, beef cheek cooked low and slow in a smoker with onions, tomatoes and chiles until the meat falls apart and its juices drip from the rustic, house-made tortilla. 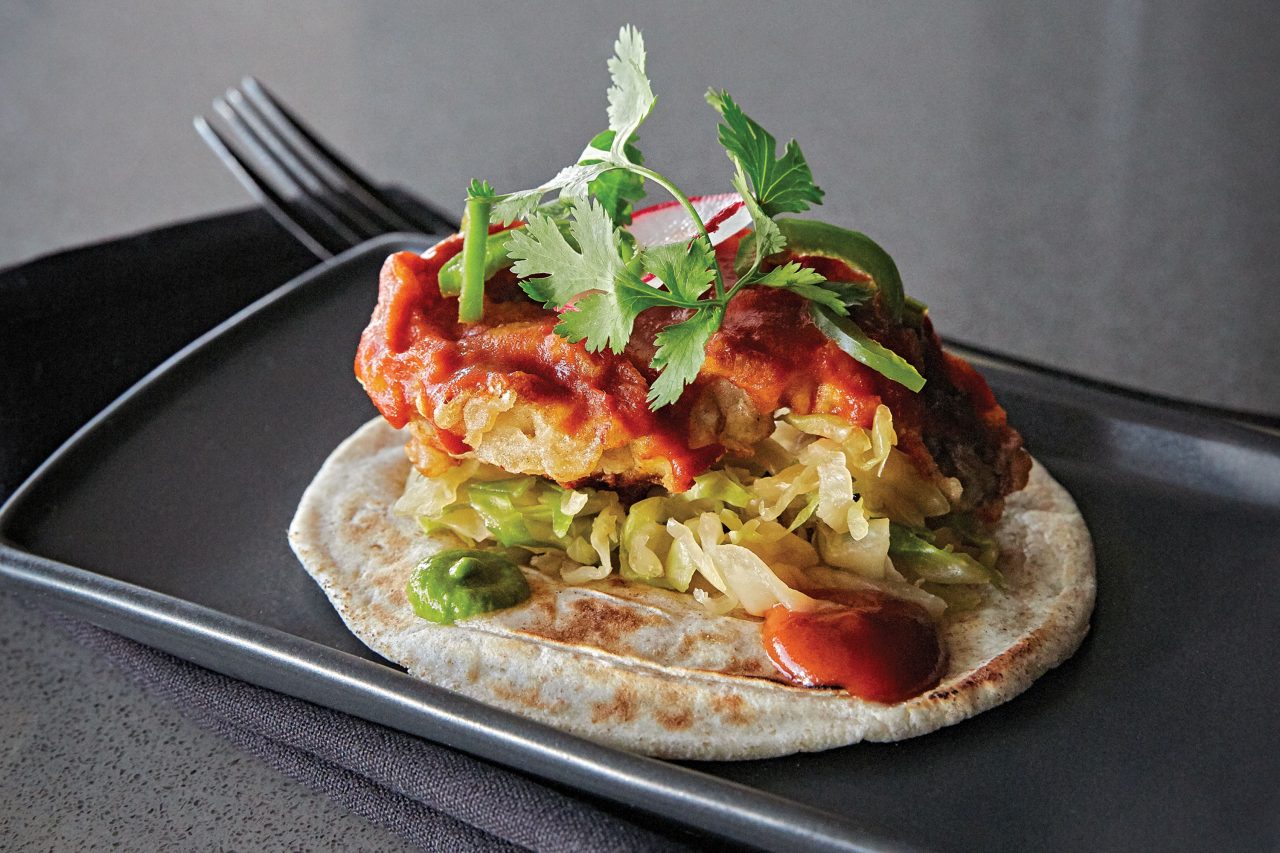 Photo by David B. Moore

Tacos are no longer the sole province of fast-food restaurants and mom-and-pop taquerias. A whole generation of high-end, haute taco restaurants has emerged in the Valley. Our assessment of the bougie taco scene.

Blanco Tacos + Tequila
Restaurateur nonpareil Sam Fox (The Henry, North Italia) now operates four of these upscale cantinas in Arizona, and two more out of state. Like much of the greater Fox menu, the tacos are healthy-seeming and well-structured. Don’t skimp on the rice – it’s uber buttery and delicious. Four Valley locations. blancotacostequila.com

Taco Guild
If Applebee’s ever started a taco-only restaurant, we imagine the food would taste something like it does at this midtown hot spot. On the plus side: The building, a converted 19th-century church, is seriously charming. 546 E. Osborn Rd., Phoenix, 602-264-4143, tacoguild.com

Barrio Queen
Don’t be hoodwinked by the “barrio” branding – Esparza parted ways with the restaurant in 2014, taking with her beloved regional oddities like the flank steak with huitlacoche (corn smut) and lengua. You can still get the $14 guac, though. Three Valley locations. barrioqueen.com

The low-hassle solution to your taco-beverage pairing needs: margaritas and Mexican-style lagers. They go well with everything. For specialized pairings, consult the chart below. 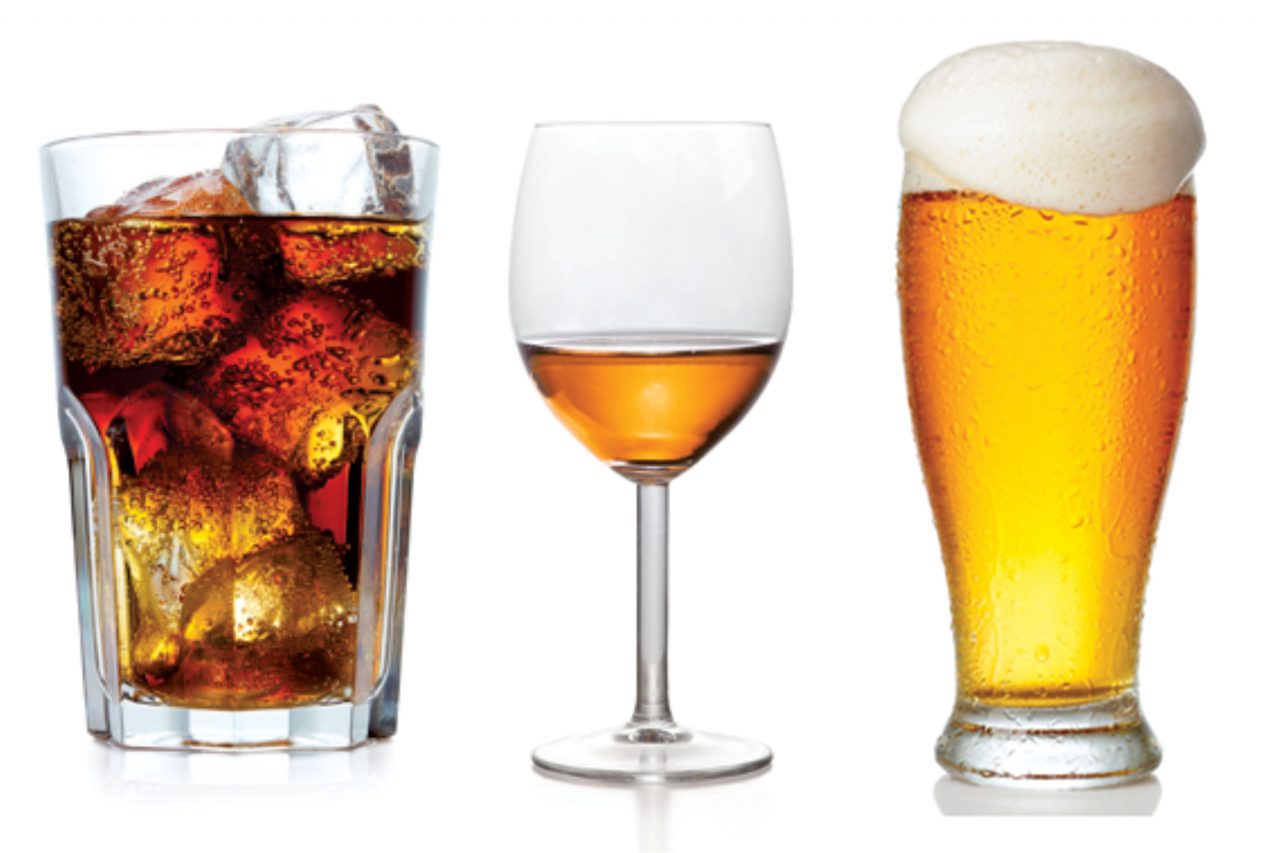 Carne Asada  –>  Kalimotxo
Red wine tends to get overpowered by citrusy asada. But red wine mixed with Coke, the way they do it in Basque Country? Olé!

Fish taco  –>  Light Lager
An aromatic white wine like Sauvignon Blanc would be fine, but c’mon. If we’re talking Baja-style fried fish, only a Mexican-style lager will do. 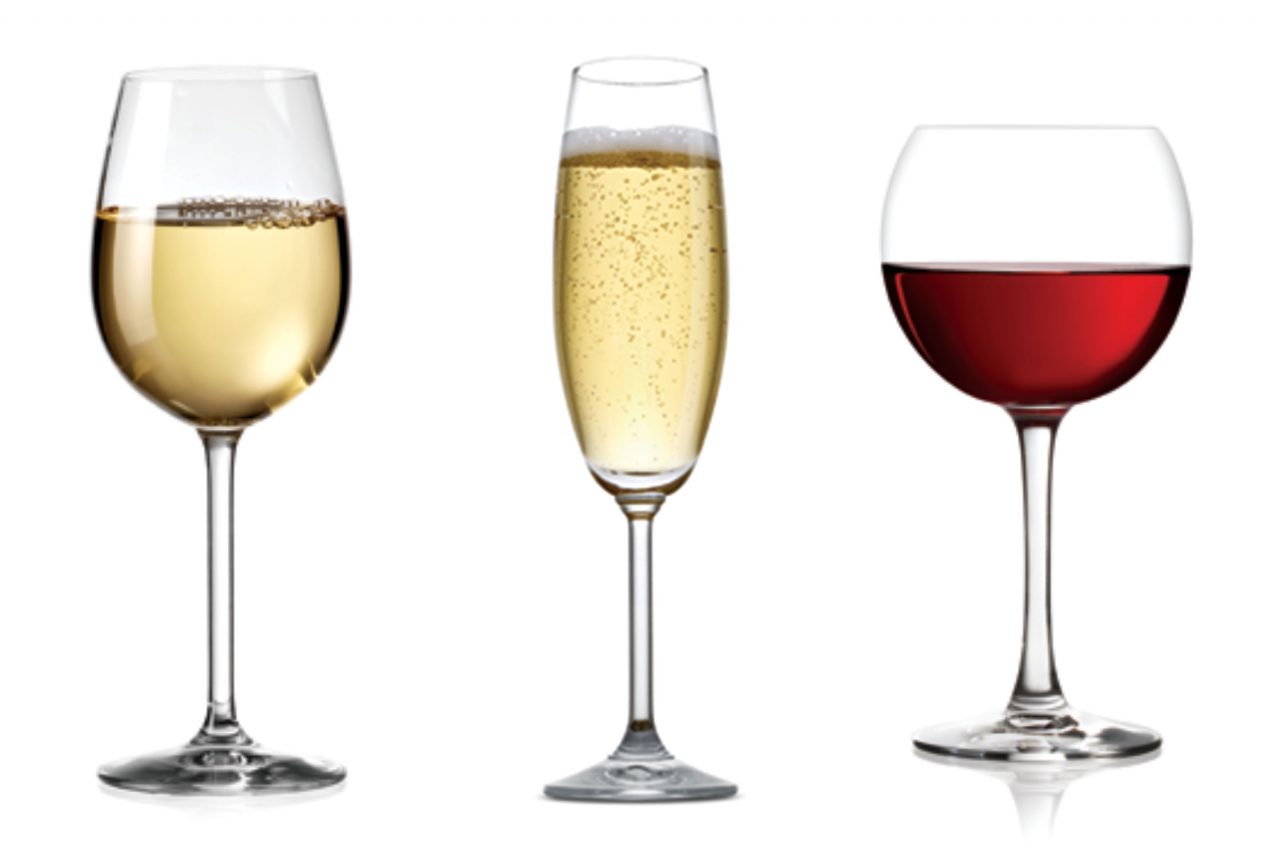 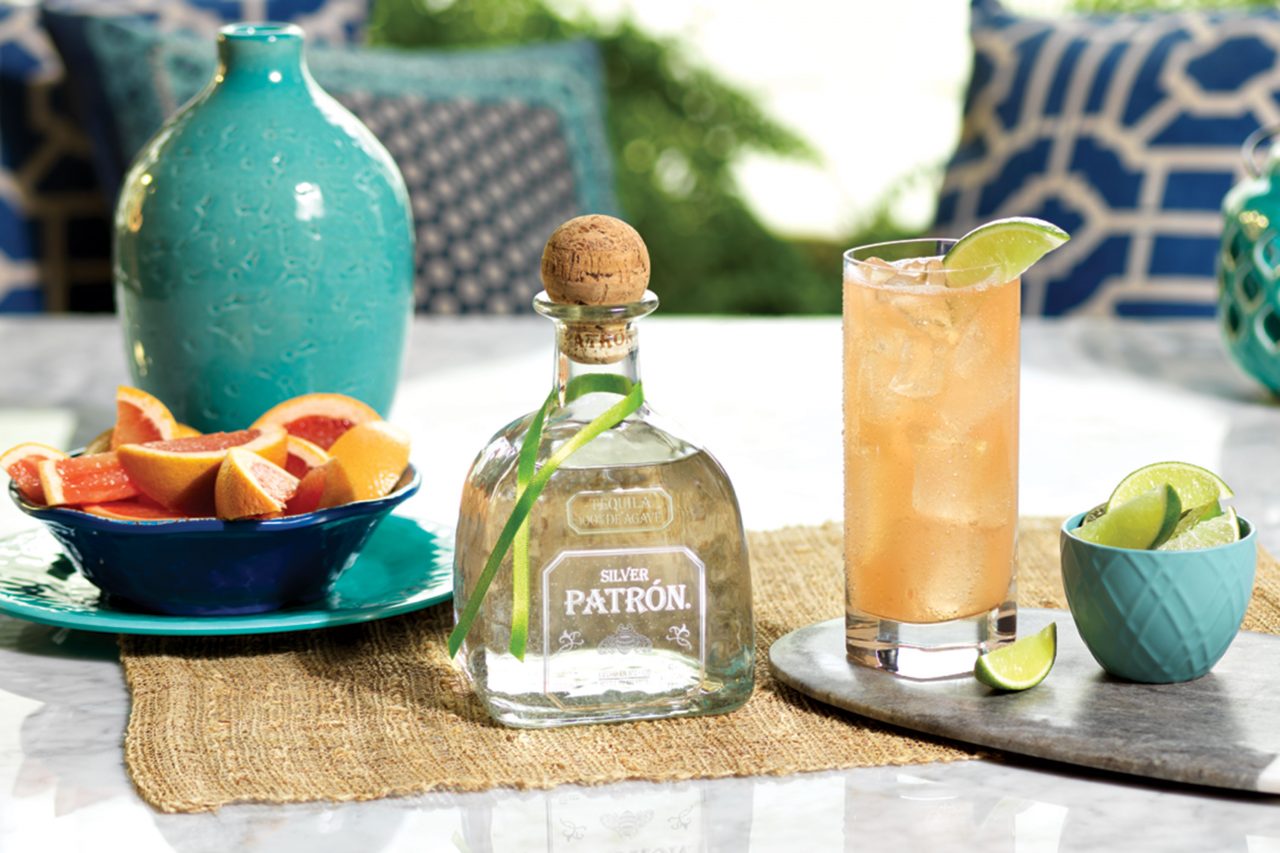 Everything else  –>  Perfect Paloma. When in doubt, pour a Paloma. It’s refreshing, simple and versatile. Combine 11/2 oz. Patrón Reposado, 2 3/4 oz. grapefruit juice, 1/2 oz. agave syrup and 1/2 oz. lime juice in a shaker tin with ice. Shake and strain into a sugar- and salt- rimmed Collins glass filled with ice. Top with sparkling water and a grapefruit wedge.

Not every taquero follows the tortilla-meat template. Acquaint yourself with these delicious oddities to achieve advanced taco expertise.

A Taco for Every Meal

Want to eat tacos all day? Put your money where your boca is with our all-day taco itinerary. 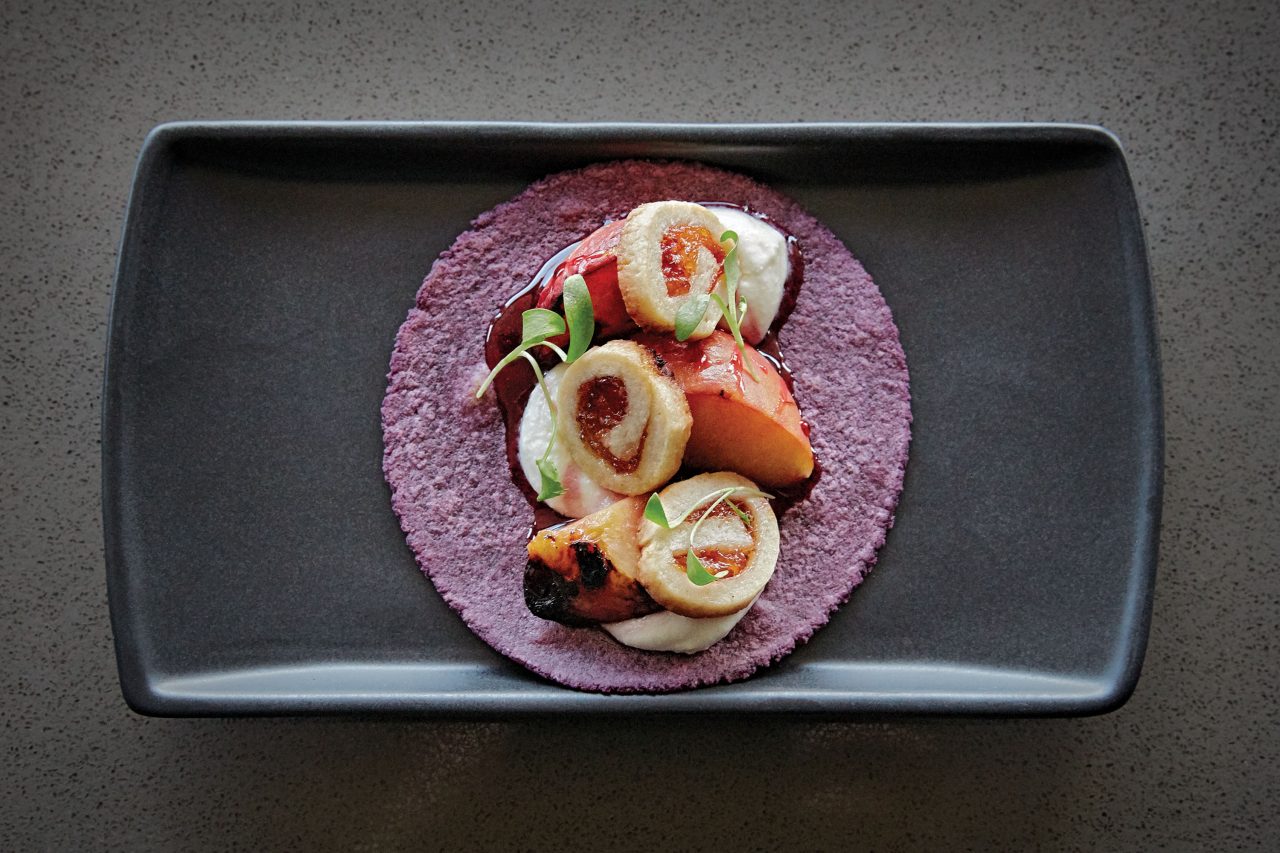 Seasonal Dessert Taco at CRUjiente; TacosPhoto by David B. Moore

Kids are picky about their food, but there seems to be a pretty straightforward consensus on this foldable meal: Kids want to eat it, they want to talk about it, and they want to read about it. From the No. 1 New York Times bestselling Dragons Love Tacos by Adam Rubin (Penguin Random House, $16.99) to Punk Taco by Makana and Adam Wallenta (Adam Wallenta Entertainment, $25) to Ava and Taco Cat by Carol Weston (Sourcebooks/Jabberwocky, $8.99), youngsters can’t get enough taco content.

Even in the Valley, corporate carpetbagger tacos are sometimes the only option. We grade them. 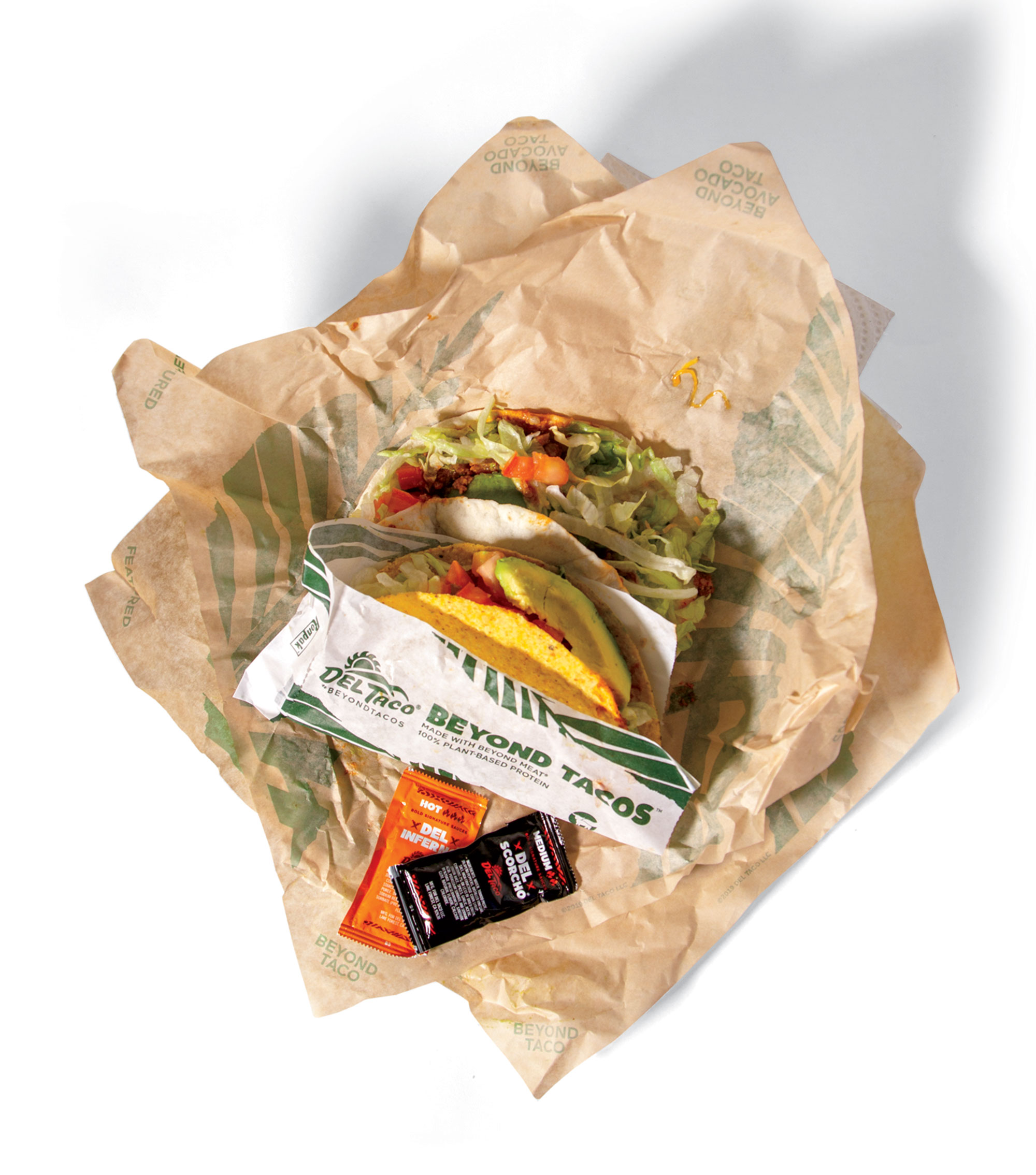 Beyond Avocado Tacos at Del Taco; Photo by Mirelle Inglefield

Admit it: You didn’t know a chalupa from a chihuahua until the Tustin, Calif.-based chain sold you one. And those Doritos-shell things? Brilliant.
Grade: B+

Long the Khloe Kardashian to Taco Bell’s Kim, “the Del” makes a perfectly tasty, old-school shell taco, along with recent innovations like the meat-free “Beyond” series.
Grade: C

Tacos? Debatable. But its Sinaloa-style grilled chicken – dripping with citrusy juices – is probably the best thing you’ll find in any mega-chain.
Grade: A-

There’s only one left in the Valley, and it’s more “casual” than “fast,” but for a time it was the gold standard of lickety-split Mex. The grilled green onion always got us.
Grade: B-

Verduras (vehr-DOO-ras) – Translating to “greens,” it’s another term for the cilantro and onion typically served on street tacos.

Find a righteous taco purveyor near your work or home. 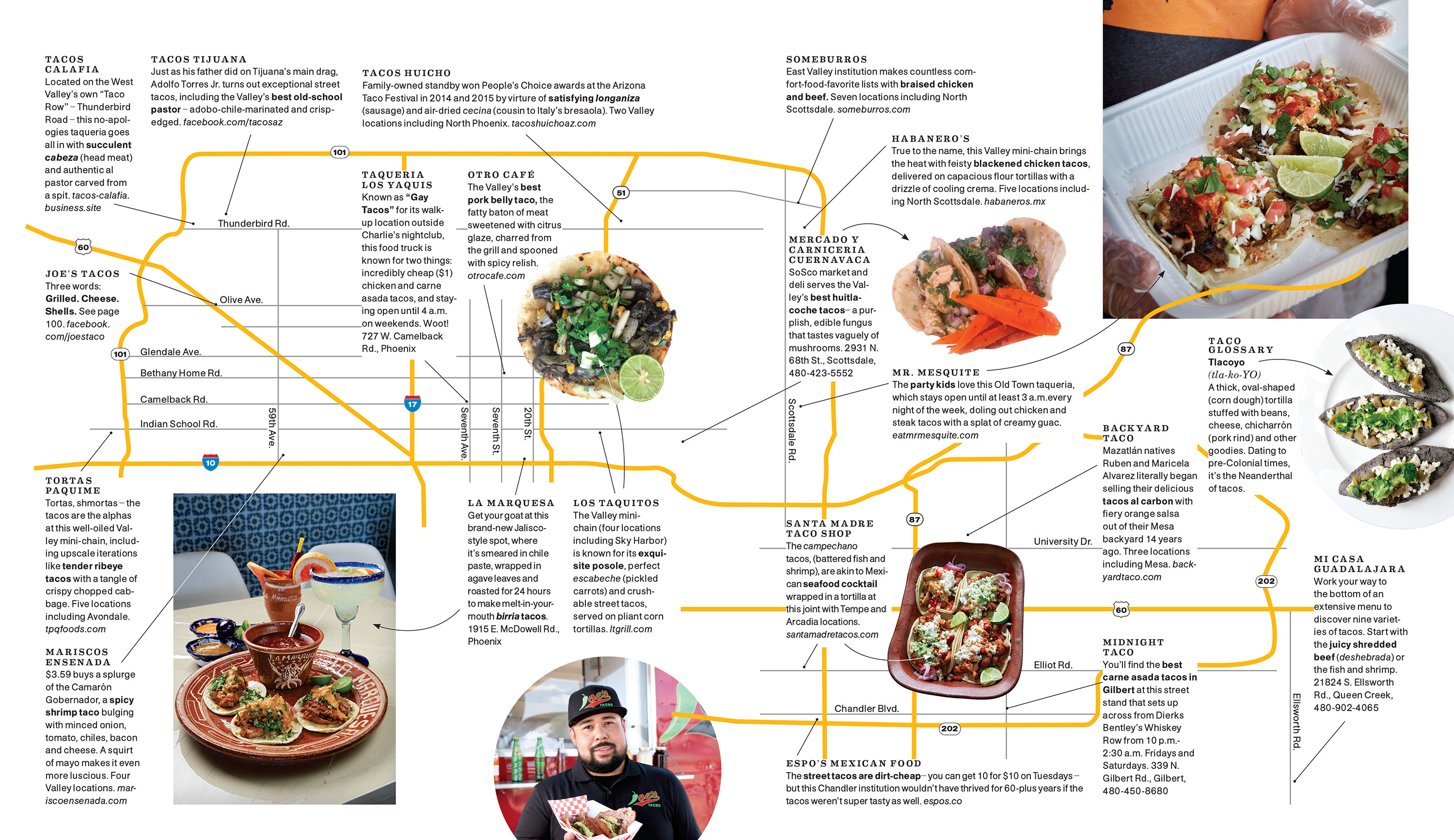 5060 W. Bethany Home Rd., Glendale, 623-271-7408
Ignore the “Tex-Mex” subtitle on its Facebook page, because this spotless but unassuming plain-Jane taco shop has very little to do with Texas and everything to do with Mexico City (referred to by locals as D.F. or Distrito Federal, its moniker before a name change in 2016). Here, tacos al pastor are served in the tradition of street vendors in D.F., which is to say, strewn with chunks of pineapple, grilled onions, grilled jalapeño and nopales (prickly pear cactus pads). They’re messy and complicated, a rowdy taco party of textures and flavors in your mouth. 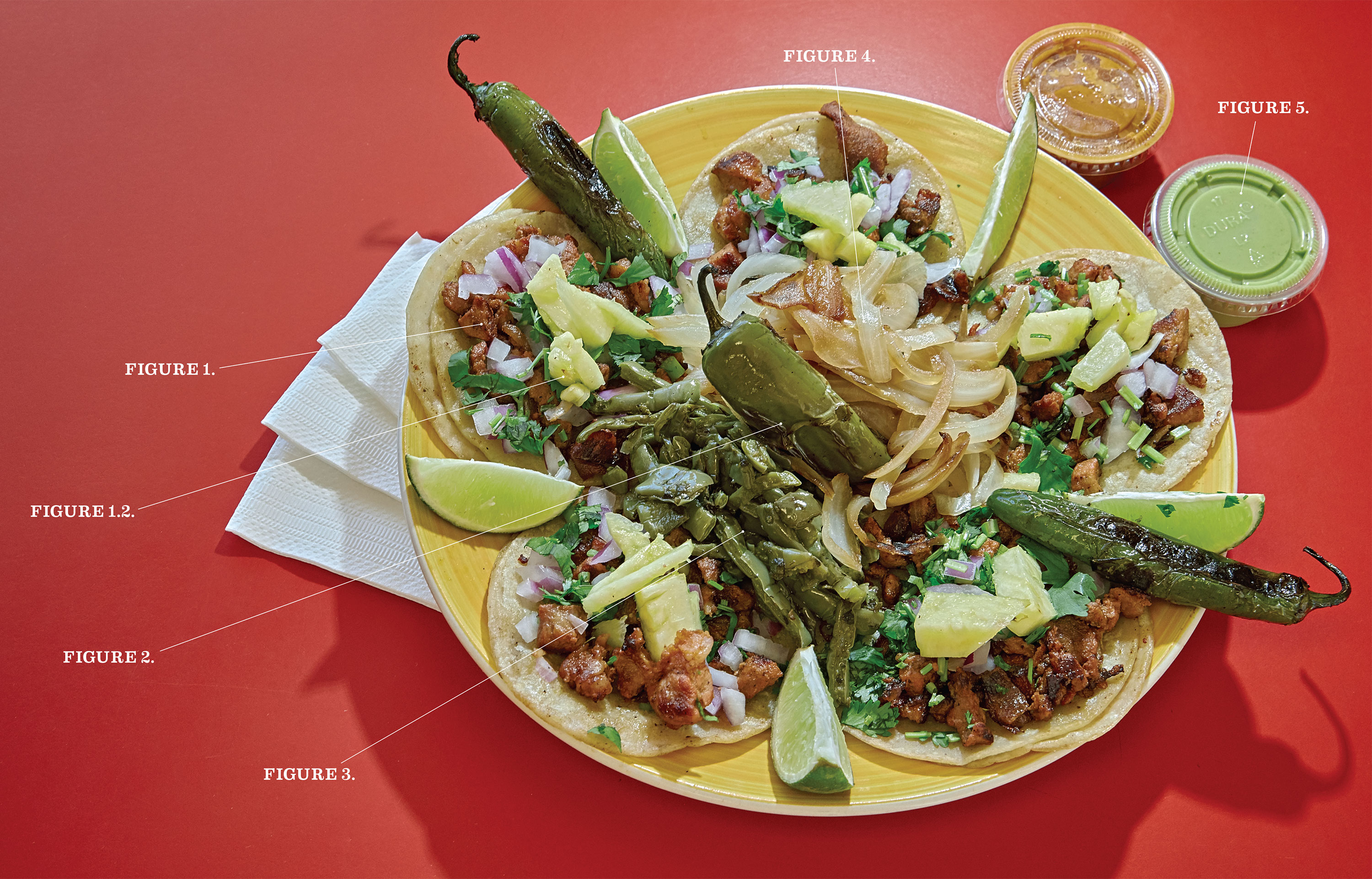 Photo by David B. Moore

Thin strips or pork are first marinated in a mixture of chiles, garlic, orange juice and spices, then stacked onto a spit (trompo) and slow-roasted until the meat’s edges turn black and crisp.

Many taqueros stick a hunk of fresh pineapple on top of the pork slices on the spit, believing that the juices of the pineapple tenderize and baste the meat. Fact or fiction? No matter. Either way, the pineapple in the taco adds sweet, juicy contrast to the faintly spicy flesh.

It’s a chile toreado -– a whole jalapeño, grilled until black and blistered, then splashed with lime juice and soy sauce, lending the taco a burst of heat and umami.

Here in Arizona, tacos al pastor seldom come with cooked onions, and more’s the pity. Caramelized at the edges, they add savory texture and another layer of natural sweetness.

A drizzle of jalapeño-tomatillo salsa adds another layer of green heat, plus a bit of tang to complete this aria of flavor.

FUN FACT
Tacos al pastor, which means “shepherd-style,” is a syncretic dish inspired by Lebanese immigrants who brought shawarma (lamb roasted on a vertical spit, a precursor to Greece’s gyros) to Mexico in the early 1900s. There are only a handful of taquerias in the Valley that follow orthodoxy and make pastor on the spit, or trompo – most just griddle the meat on a stovetop.

Meet the Titans of Tacos

Over the decades, dozens of talented chefs have stirred their own unique genius into the Valley’s taco consciousness, from trailblazers like Tee Pee Mexican Food founders Tony and Anna Duran to virtuoso talents like Silvana Salcido Esparza. Here are five chefs guiding the modern taco-versation. 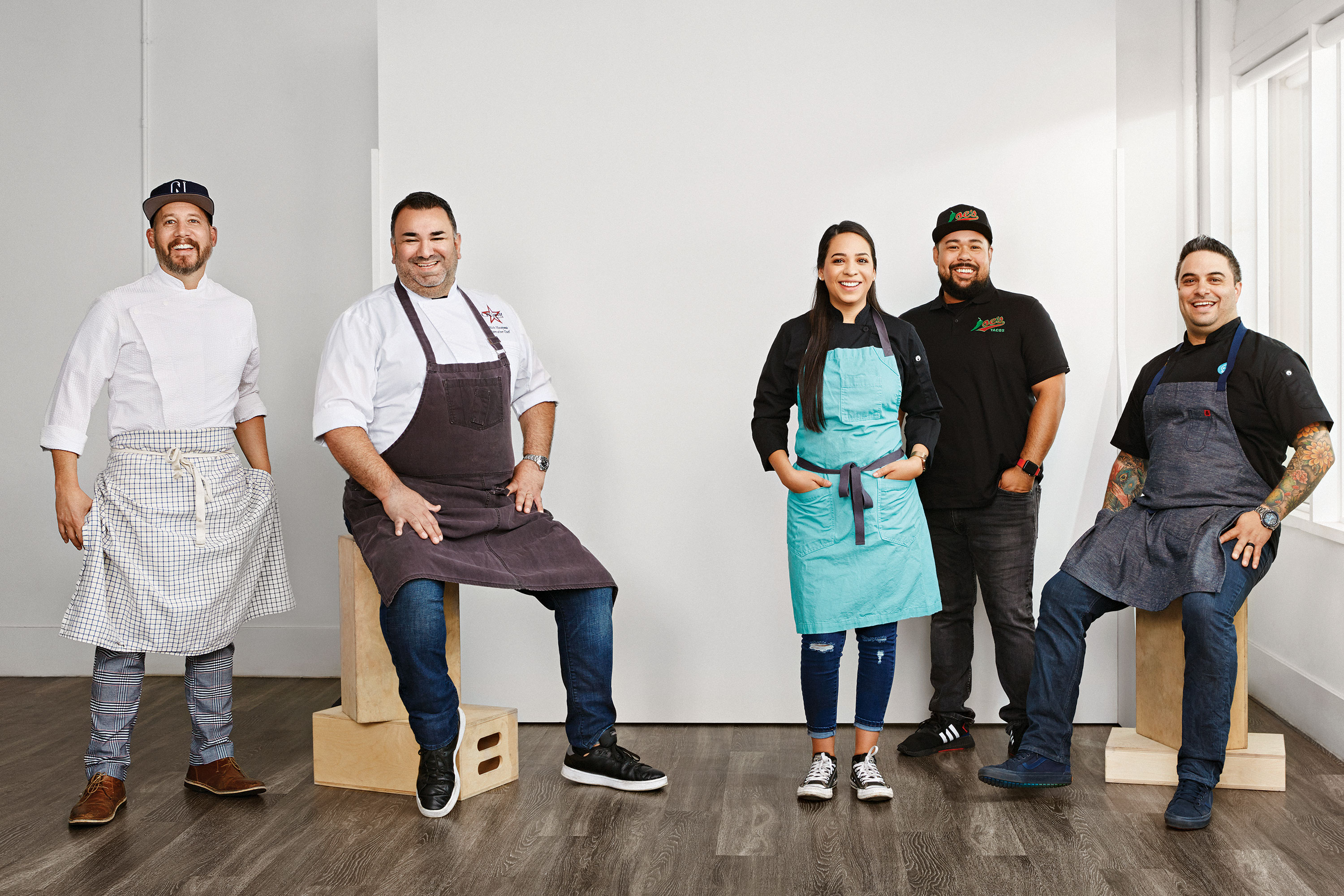 From left to right:

Doug Robson
Gallo Blanco
Doug Robson started making tacos when he was 3 years old. “Tacos have been in my DNA for as long as I can remember,” says the chef, who spent part of his childhood in Mexico City and would furtively visit taco stands on the way to school. Honing his culinary skills at the Scottsdale Culinary Institute and earning his upscale-dining wings at the Citadel and La Grande Orange, he returned to his roots and opened Gallo Blanco in 2009, which jump-started the gourmet taco craze in Phoenix and catapulted him into culinary stardom. “Mexican food was always in my soul.”
Favorite taco ever: “There’s this taco place in the center of downtown [Mexico City] by the museums and the church, and their tacos are the best I’ve ever had.”

Richard Hinojosa
CRUjiente Tacos
Richard Hinojosa fell in love with cooking when he learned how to make tacos from his family in San Antonio. He became a jet-setting, award-winning fine dining chef, but always “had this idea to do a taco restaurant.” So, he took everything he learned from fine dining in Texas, California, Hawaii and Arizona (he was chef at Litchfield’s at The Wigwam) and created CRUjiente with partner Jason Morris. “They’re worldly influenced, refined tacos.”
Favorite taco ever: “I was probably about 9 years old, and there was a little taqueria by the church by my grandma’s house… That was the first time I had a chicharrón taco with green chile. I still remember the first bite I took of that taco.”

Nadia Holguin
Tacos Chiwas
Nadia Holguin has been making tacos since she was a little girl, piling her mother’s scrambled eggs and beans onto tortillas for breakfast. She didn’t start making them professionally until she and her business and life partner, Armando Hernandez, opened Tacos Chiwas in 2016 because she “couldn’t find a taco place that met my taco needs.” So she created one. And then picked up a James Beard Award nomination this year for her trouble.
Favorite taco ever: “The best taco, the taco that changed my life, was in Mexico [City]. I tasted the best taco de pastor. I love our pastor at Tacos Chiwas and, not to brag, but I had never tasted [a] better one until I visited Mexico [City] a few months ago.”

Joe Sanchez Jr.
Joe’s Tacos
Joe Sanchez Jr. was a Valley letter carrier before he started Joe’s Tacos in late 2016, drawing both from the culinary expertise he picked up from his parents as a niño in Texas, and his years working out of a USPS truck –Joe’s is also a four-wheel endeavor. Back in Texas, his family would create monumental tacos on hand-pressed tortillas. “We always try to keep it as authentic as possible,” he says, but authenticity doesn’t mean boring: He pioneered the technique of creating all-cheese shells for taco lovers on a keto diet, and has plans to open up a new truck.
Favorite taco ever: “This dude that would sell outside of the bus stop outside of Fresnillo, Mexico. There’s this guy who would sell [carne asada tacos] with his bare hands.”

Eric Ramirez
Joyride Taco House
“You don’t ever really decide ‘I’m going to do tacos,’” Eric Ramirez says, adding that he learned the art of taco craft as a child in Texas. “You just find yourself answering the call.” Ramirez was executive chef at Fox Restaurant Concepts before taking over as culinary director at Upward Projects restaurant group, which includes Postino, Windsor and Federal Pizza, in addition to Joyride, where he personally engineered its taco program. He loves walking the line between authenticity and innovation. “Honor traditions, explore the future and come to a comfortable result. It’s a taco. It’s a tortilla with your imagination in the middle.”
Favorite taco ever: “Carne asada. You get that charred, beefy caramelized flavor with a little bit of cilantro and then that fresh pressed tortilla. It’s just so simple and so perfect.”