When a prominent businessman was found dead in the Arizona Canal in 1922, his little black book exposed Phoenix high society’s steamiest secrets.

The first person to spot the dead man floating in the irrigation canal was a rancher crossing the Central Avenue bridge, who briefly mistook the head bobbing in the murky waters below for a bather seeking relief from a scorching September afternoon in the then-rural outskirts north of Phoenix. A passing motorist helped him brave the 4-foot-deep flow to pull the lifeless body, clad only in silk underclothes, to the shore, where they noted it was not rigid but still warm and in excellent state of preservation. Except, that is, for the deep cuts and bruising clearly visible on the dead man’s neck and chest.

And just like that, this dusty cow town in the middle of the Arizona desert was entangled in a nationwide scandal that led from the posh, private ballrooms of the Phoenix Country Club to the smoky backrooms of City Hall. Soon there would be scandalous headlines about so-called “pajama parties” among the city’s “millionaire set,” jilted husbands, death threats and rumors of a hush-hush cover-up that forced the governor to publicly proclaim that he wasn’t “squelching the investigation.” But first…

The call came in around 3 p.m., when Sheriff John Montgomery rushed with three fellow lawmen to the scene near today’s Dunlap Avenue. Tracking upstream, the officers discovered the dead man’s new Dodge Brothers touring car parked in the shade of a willow tree. His shoes were lined up neatly along the canal bank, his clothes and personal effects all carefully folded and arranged on the front and rear seats.

Officers quickly identified the deceased as Guy N. Dernier, a bigwig accountant and former federal tax agent who’d reportedly struck it rich investing in a gold mine in Douglas, near the Arizona-Mexico border. He’d even been named the secretary-treasurer of the aforementioned Phoenix Country Club, founded in 1899 and still considered the city’s most exclusive. 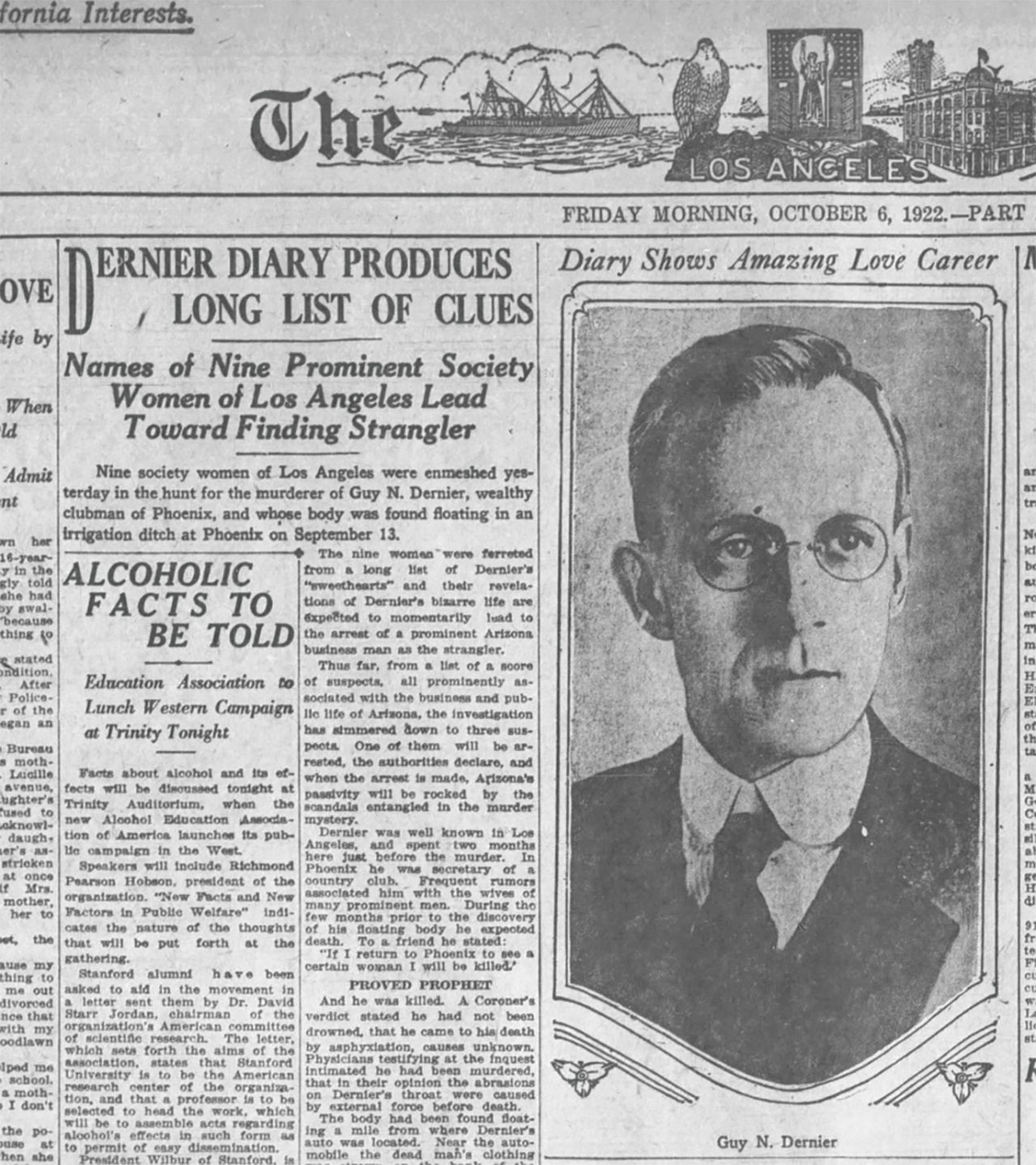 Months after being pictured in a glowing newspaper write-up about the club’s move into its current 160-acre estate on Thomas Road, Dernier abruptly resigned, shuttered his tax preparation firm and relocated to Los Angeles. Friends there later said Dernier had explained that, “If I return to Phoenix to see a certain woman, I will be killed.” But after a year away, Dernier checked into the ritzy Commercial Hotel in Downtown Phoenix. Two days later he was dead.

Dernier’s shocking demise made the next day’s Arizona Republican newspaper, though it was relegated to page 12, between the “Weekly Report of the Arizona Cattle Growers Assn.” and “Preparations Are In Full Swing For The 1922 State Fair.” And while local officials acknowledged the mysterious circumstances, their working theory was, “when Dernier entered the water, the great change in temperature may have caused heart failure, and that by drifting down the canal, the body was cut and bruised by the sharp, jutting rocks, imbedded in the floor of the stream.”

It seems the whole matter might have blown over if investigators hadn’t discovered one more thing in Dernier’s Dodge – a vest-pocket notebook with the names and addresses of people he had done business with across Phoenix, Los Angeles and his hometown of Chicago. Most scandalously, the newspapers reported that 22 of the names were prominent, and married, society women, many marked with notations such as “Husband works nights.” Some even speculated that the police had letters proving Dernier was blackmailing many of these wealthy couples to keep quiet about his illicit affairs, and that Dernier’s stash also included pictures of several of his paramours in flagrante delicto.

Adding fuel to the fire, a grand jury determined that Dernier – who was last seen leaving the Phoenix Country Club around 12:10 p.m., when he declined lunch with a local newspaper publisher because he was “going out to see a little widow” – was officially a victim of foul play, most likely strangled and then dragged a considerable distance to the canal bank, based on the postmortem cuts and scratches to his knees and toes.

A monthlong inferno was sparked as newspapers from Buffalo to Bisbee ran front-page exposés about the man dubbed “Phoenix’s Love Pirate” with the “Names of 100 women found in a ‘Harem Directory’ in his pocket.” Tipped off to the contents of Dernier’s diary, reporters raced to interview people linked to the now infamous “clubman.” Most seemed bewildered by the sudden spotlight, and claimed to be mere business acquaintances, though one woman told The Los Angeles Times that Dernier had hinted of gold mines and “double-crossing Slavic partners back in Arizona.” It all peaked in mid-October in what was surely one of the first paparazzi-style pursuits, as reporters tailed a Phoenix businessman, and supposed suspect, on a five-hour overnight car chase across Southern California at breakneck speeds “up to 50 miles per hour!”

But after weeks of rampant speculation and repeated promises that arrests were days away, the trail in the so-called “most mysterious case in the crime annals of Phoenix” went from hot to cold as quickly as an Arizona sunset. Or as Deputy Sheriff F. A. Bell memorably remarked in a press briefing, “Trouble with that fellow was he changed his sweethearts like he changed his neckties – and he had a lot of neckties!” 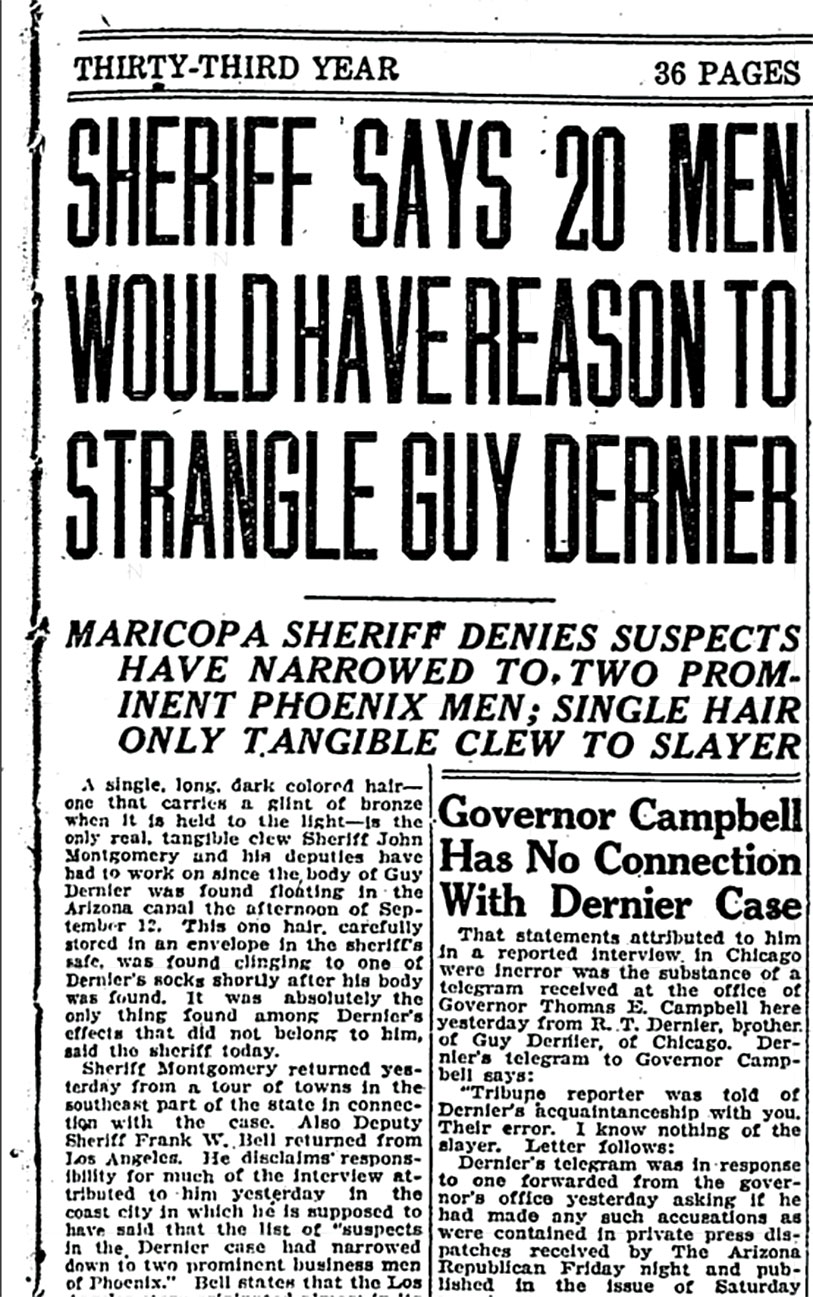 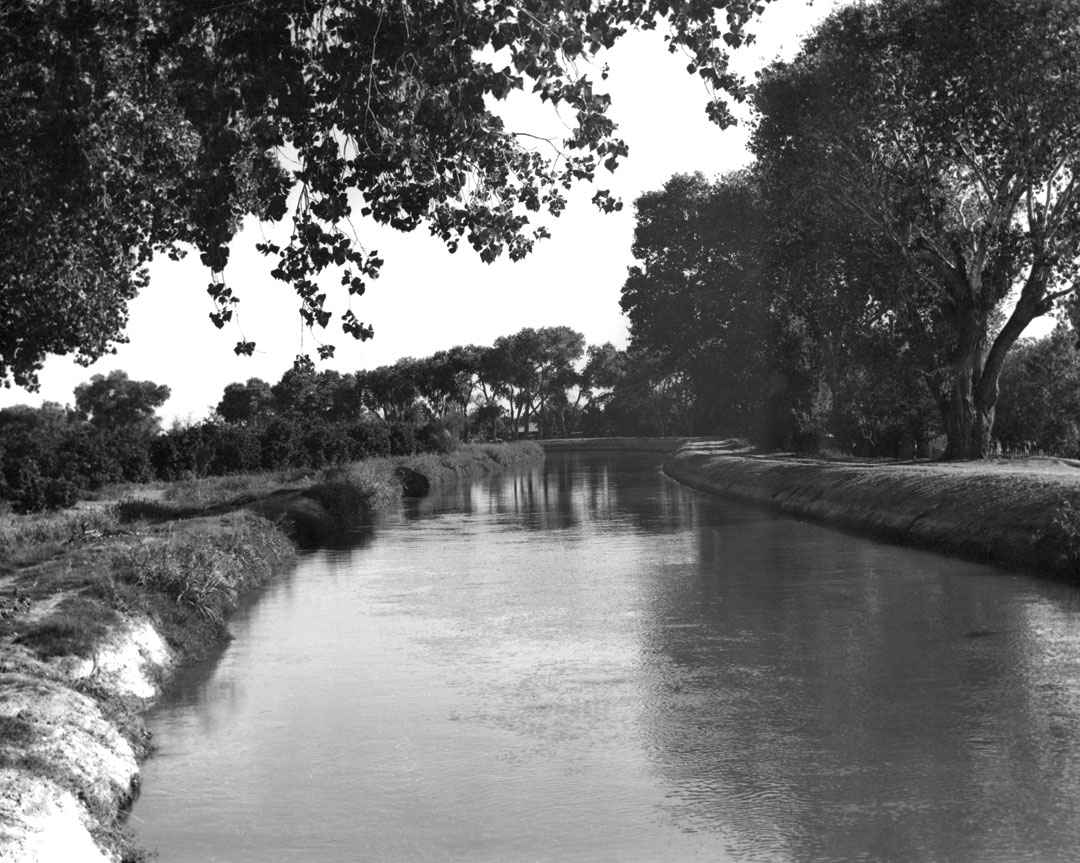 “Rumors are rife,” one local newsman surmised in his write-up of Dernier’s funeral (which police staked out and said was attended by a suspicious brunette named Thelma, though nothing ever came of it). All that’s certain was, “Only ashes now remain of what was the body of happy-go-lucky, likable Guy Dernier.”

Despite the best efforts of Dernier’s brother back in Chicago – who admitted to reporters that the murdered man “didn’t have no wings,” but wasn’t the criminal cad reports made him out to be – the case slowly slid off the front pages and into oblivion. The last blip was in late December of that year, when the papers reported that Dernier’s estate had been valued at $1,500 and divvied up amongst his heirs. There was no mention of a gold mine. 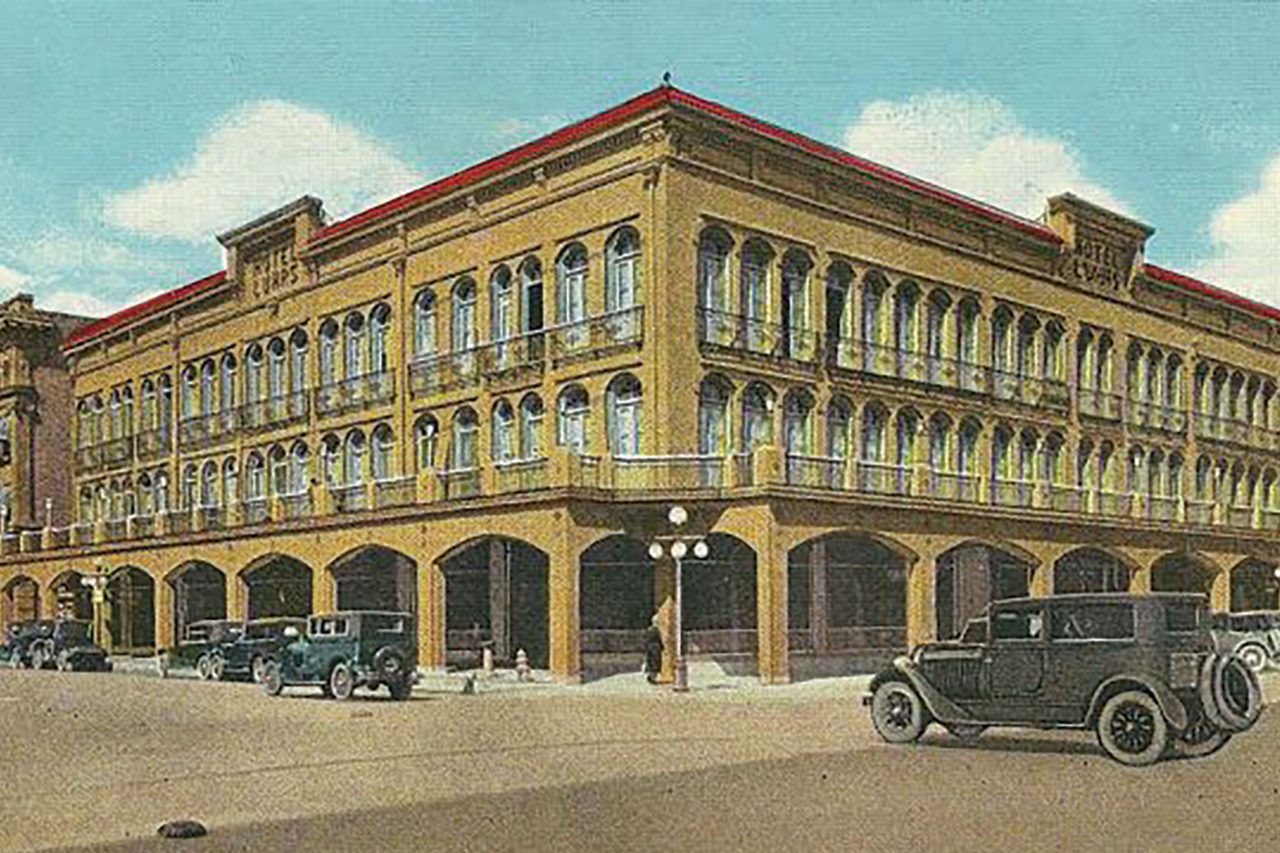 Who choked Guy N. Dernier and “flung him into the ditch as a man might fling the carcass of a coyote to get it out of sight and mind,” as The Buffalo Courier said in 1922? Aside from the little black book, the only clue was a single, long strand of henna-tinted hair clinging to the dead man’s sock. After tracking and clearing most of the 100 names in Dernier’s diary, Sheriff John Montgomery announced:

“There are perhaps 20 men who would have had motive for killing Guy Dernier. He lived a dual life. He was the courtier to housemaid or to her mistress. He hobnobbed with pillars of society and with bootleggers… Dernier might have been killed by a jealous husband, or he might have died at the hand of some prostitute’s paramour.”

Two days later, county attorney R.E.L. Sheppard said, “Three leads have directed us to the doorsteps of three [men]… who can clear up this case – the most outrageous and flagrant crime I have ever come in contact in my 25 years as a lawyer.”

Finally, deputy sheriff Frank W. Bell said his suspect list was down to one, while revealing there was more to Dernier being found in his undies. “Dernier used to stage pajama parties that were very popular among the smarter, swifter crowd… it was rather a fad to ‘trade wives’ on these occasions, and I’m told Dernier played the whole field.”

After a cheating wife confessed to her husband, Bell said “the husband set the trap and the wife crawled in to be the bait,” by asking Dernier to visit. “Presumably Dernier believed a pajama party was to be staged… While in the arms of the woman, her husband stole out from his hiding place and gripped his hands around Dernier’s neck.”

The suspect was never identified.