To achieve acclaim in their industries, these former Valley schoolkids needed to leave town. Catch up with our most famous Phoenix-reared millennials. 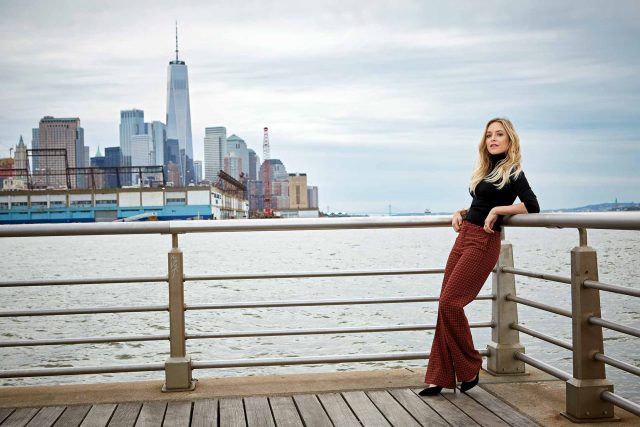 After graduating from Chaparral High School in the late ’90s, Jenny Mollen Biggs set her sights on a career in entertainment – a bug she may have picked up from her celebrity-doctor dad, local fitness icon and Phoenix 10K founder Art Mollen. She enrolled at the University of California, Los Angeles, as a theater major only to discover that she preferred telling stories. “I started writing, but I never considered myself some great writer. I can barely spell,” she jokes. After graduating from UCLA, she worked as an actress, “playing someone’s girlfriend for a season or doing a guest star [role], but nothing fulfilling.” While working on the 2008 rom-com, My Best Friend’s Girl, she met actor Jason Biggs of American Pie fame, and they married in quick order. Social media has been a huge driver for her success. The actress/scribe uses her Twitter handle @jennyandteets (Mr. Teets is her late dog) to dispatch the often cringeworthy details of her life, including the time she and Biggs hired a prostitute in Las Vegas. On Instagram (@jennymollen), she posted a blow-by-blow of her son’s birth and a photo of her naked husband crawling on the floor. Now, Mollen Biggs, 39, limits herself to writing and only acts occasionally, “when I get roped into it.” She’s penned two books: I Like You Just the Way I Am and Live Fast Die Hot, both reaching The New York Times best-seller list. “When you’re acting, you’re doing what somebody else wants you to do. I realized I had my own stories to tell. Once I started writing, my life changed,” she says. Mollen Biggs lives in New York City and spends her days writing her third book and mothering Sid, 5, and Lazlo, 1. She compares her life in Manhattan to being on a cruise ship. “I feel like I can have two lives. I live upstairs, and downstairs it’s a night on the town.” 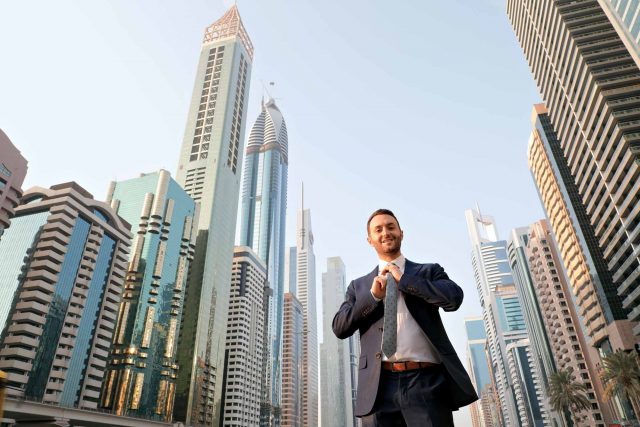 There are moments when you have news in your hand and you’re one of only two people in the world who know it,” says Samuel Burke, a North High School alum who is now a business and technology correspondent for CNN Business based in London. “When [former Egyptian president Hosni] Mubarak stepped down from power, we were reporting [the story] and I got the inside scoop before it was published anywhere,” he says. Burke, who speaks fluent Spanish and earned a master’s degree from Arizona State University’s Walter Cronkite School of Journalism and Mass Communication, has propelled quickly through the CNN ranks since starting as an intern on Anderson Cooper 360°. He snagged his first post-college job as a low-level digital producer for British-Iranian journalist Christiane Amanpour and “then worked my way up,” he says. On top of his correspondent gig, Burke also produces and anchors El Cibercafé on CNN en Español, where he discusses the latest tech news. The 34-year-old Emmy-winning journalist credits his parents with encouraging him to learn Spanish, a skill that scored him a congressional page position in high school with the late U.S. Rep. Ed Pastor and eventually landed him at CNN International. When first starting out, Burke knew he wanted a big platform, but never dreamt his career would take this stratospheric route. “Working for CNN is all-encompassing. You can be a tech reporter and then all of a sudden [be] covering terror attacks because of their social media footprint and then [be] covering the royal wedding. That’s really the surprise and delight of being a journalist at CNN.” Burke’s family still lives in Phoenix and he visits when he can. “I love Arizona. Of all the places I’ve been and lived, Arizona is still No. 1 for me.” 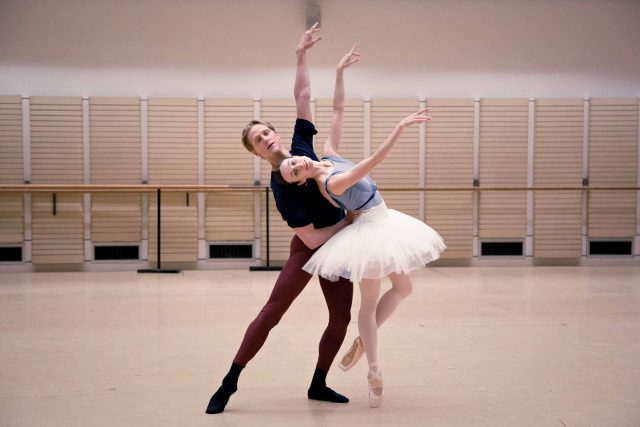 As a male teenager studying dance at The School of Ballet Arizona in Phoenix, David Hallberg endured constant teasing and name-calling by public school classmates. “But I never thought of giving it up. I just persisted through it,” he says. His resolve paid off, resulting in a remarkable career that includes his current position as principal dancer with the prestigious American Ballet Theatre in New York City, where he lives, and in 2011 being the first American to dance as a premier dancer with the famed Bolshoi Ballet in Moscow. For Hallberg, 36, success is derived from a mix of discipline, drive and humility. “Hard work pays off… as well as an openness to learn new ways and experience new environments. I’ve risked a lot for this life, but it has truly been the path I needed to go down. There is no other way.” At age 11, Hallberg landed his first ballet role in Ballet Arizona’s version of The Nutcracker and became mesmerized with ballet and “the devotion of the dancers.” He graduated from Arizona School for the Arts in 2000 and has vivid memories of dancing at Symphony Hall, Orpheum Theatre and Herberger Theater Center. “All left an impression on me as I started to perform more and more, especially Symphony Hall, with its backstage I know well and the memories of being young and watching ballet in the wing.” At the peak of his career in 2014, Hallberg suffered a crippling ankle injury while dancing that forced him to leave the stage temporarily. He endured two surgeries and traveled to Australia in 2015 for 14 months of grueling rehab, eventually fighting his way back to the spotlight. His memoir, A Body of Work: Dancing to the Edge and Back, was released in 2017 by Simon & Schuster. 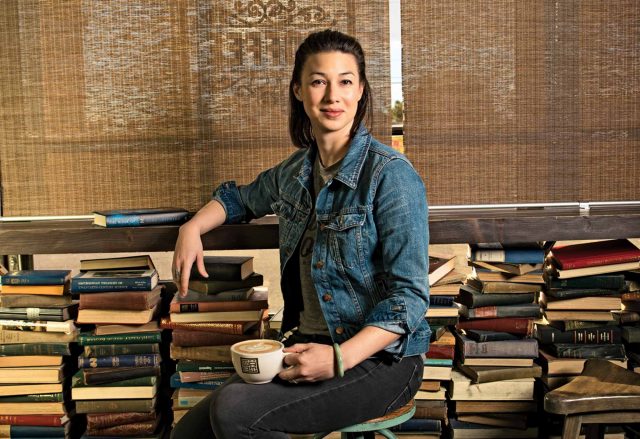 When novelist Peng Shepherd was 5 years old, she began writing “obsessively,” filling spiral notebooks and makeshift binders with creative stories bursting with fantasy and magic. Shepherd, the daughter of former Channel 12 News anchor Lin Sue Cooney, spent many days on the set sitting next to her mom just off-camera, quietly coloring and writing. “Apparently, I was well-behaved enough to do that,” she says. A self-admitted introvert who studied classical ballet, Shepherd always felt at home among books. “I lived in the library when I was a kid. I begged to be driven there every weekend and went through the whole science-fiction/fantasy [section].” Initially, Shepherd didn’t pursue writing professionally, but after studying as an undergrad at Arizona State University and getting a master’s degree in international studies and diplomacy at the University of London, she tackled a master of fine arts degree in creative writing at New York University. With degree in hand and only the main characters in mind, Shepherd wrote The Book of M, a dystopian novel about “ordinary people caught in an extraordinary disaster,” that was picked up by HarperCollins and released in June 2018 to rave reviews. Kristina Wright of BookBub writes, “This haunting, thought-provoking and beautiful novel explores fundamental questions of memory, connection and what it means to be human in a world turned upside down.” Getting it published was “a super scary process. It’s a lot of luck, but there’s really only one way to do it and that’s by sending the manuscript to literary agents.” Shepherd, 32, and her husband, a pediatric emergency room physician, currently live in Las Vegas, where’s she’s working on her second book. 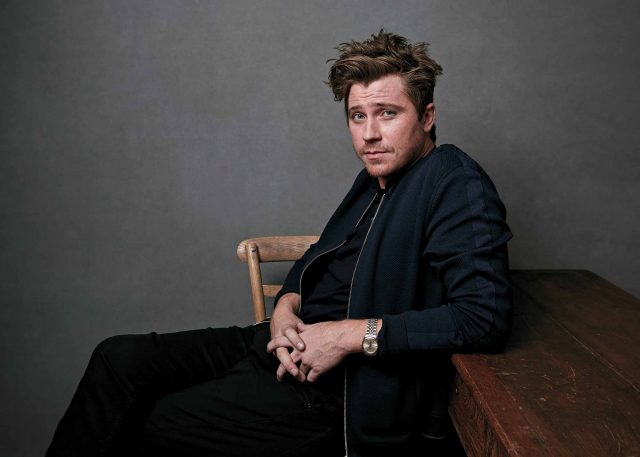 Growing up in rural Minnesota, actor Garrett Hedlund watched popular TV shows and then trolled the credits for studio addresses so he could send notes to the station. “I would ask if I could be a part of the [show]. It was so far-fetched – like a kid wanting to become a professional athlete,” says the former high school wrestler. At 14, Hedlund moved to Scottsdale with his single mom, spending his formative years at Horizon High School, where he binged on drama, writing and photojournalism classes. “The creative wheels were spinning,” he says. After school, he’d hang out at Barnes & Noble devouring books he couldn’t afford. “I’d dog-ear a page and then come back the next day and continue reading,” he says. Inspired by cinema, the aspiring actor also frequented the movie theater, “paying for one and then staying for three.” While in high school, he found a Hollywood manager willing to take on “a knucklehead calling from Nowheresville” and began auditioning for roles. In the meantime, he bussed tables to pay for his audition trips. Itchy to jumpstart his career, Hedlund graduated early and headed to Los Angeles, where he auditioned for the part of Patroclus in the 2004 blockbuster Troy, starring Brad Pitt. “A month later I found myself in London, Malta and Mexico shooting for the next nine months. It was a wonderful first experience.” Since then, he’s racked up a résumé of 20-plus films, including memorable turns in Friday Night Lights, TRON: Legacy and Unbroken. In 2019, he’ll star opposite Ben Affleck in Triple Frontier, an upcoming Netflix movie about five former Special Forces operatives who reunite to pull off a South American heist. Hedlund, now 34, still visits his mom in Scottsdale and revels in rainy desert nights and pink-hued sunsets. “Everything I experienced in Phoenix is really what made it possible for me to be where I am. It’s forever imprinted in my genome.”