Valley pilot Brian Udell made history by surviving a Mach 1.2 ejection from a fighter jet. Later, he flew commercial and aerobatic planes. So why is he grounded?

“You hear the stories about farm kids driving tractors from the time they could reach the pedals? I’m like a farm kid, except my tractor had wings,” says Brian Udell, a faint twang in his voice matching the native Texan’s crisp Wranglers and scuffed cowboy boots. The Queen Creek pilot, now 55, got his first flying lesson from his father when he was just 9 years old. He was too short to see out of the windshield, so his dad propped him up on a phone book. The junior airman was hooked.

Udell grew up to become an elite United States Air Force pilot, graduating No. 1 and receiving the Commander’s Trophy at the prestigious Euro-NATO Joint Jet Pilot Training Program. He later earned the plum assignment of flying the F-15E Strike Eagle, the most advanced fighter jet in the world when it was introduced in 1989. It was an ejection from this jet during a training flight in 1995 that hurtled Udell into the public spotlight and made aviation history.

In a twist that shocked the local flying community, it was also what led to him being grounded by the Federal Aviation Administration 20 years later – a rare but dreaded fate that is every professional pilot’s worst nightmare.

Udell was born in Kansas City, Missouri, and raised in Houston, Texas, by his Air Force colonel father and homemaker mother. His dad, Maurice H. Udell, was “like an instructor to the stars,” Udell says, who trained a young George W. Bush and laid the foundation for Udell’s aviation philosophy. “You get one shot. You’d better be doing things right,” he says. “Bad things can happen to good people. You have to be prepared.”

A really bad thing happened to Udell the night of April 18, 1995. During a routine training flight off the coast of North Carolina with weapon systems officer Captain Dennis White, the jet was in a 60-degree right-hand turn when a computer failure in the aircraft’s avionics system caused a malfunction. Instead of completing the turn, the jet was actually rocketing vertically down toward the Atlantic Ocean at supersonic speed –  780 knots, or more than 800 miles per hour. At that speed, Udell knew he had only seconds before the plane plowed into the Atlantic, and no plausible way to pull out of the dive without exposing the men to brain-crushing gravitational forces. 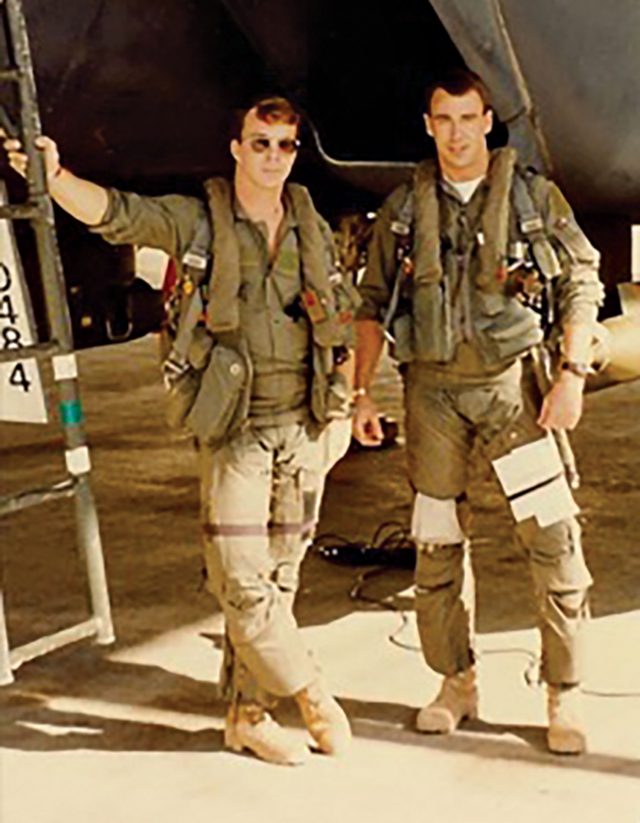 He gave the command to eject at 10,000 feet, knowing White’s seat would release first, then his. He pulled the handles at 6,000. The canopy went off at 4,500. White ejected at 3,000. Udell ejected at 1,500, his body flung so violently that his helmet and mask were ripped from his head. His parachute opened around 500 feet and he fell into the ocean, sustaining life-threatening injuries (see sidebar) and waiting four hours before being rescued. White died immediately upon ejection.

An Air Force investigation cleared Udell of culpability. “They said, ‘You made the only decision you had.’”

Doctors warned Udell he may never walk again. Six months later, he was walking. Within 10 months, he was flying patrol and combat missions in the Middle East. “I rehab like a wild man,” he says.

After 10 years in the Air Force, he started flying for a commercial airline and competitively flying aerobatic planes, an outlet for his adrenaline addiction. He and his native Arizonan wife, Kristi, moved to the Valley to raise their children Morgan (in utero during Udell’s accident), Garrett and Samantha, now 23, 22 and 18.

Things were going well until 2013, when, after completing a flight to Sacramento, Udell suffered an aortic dissection during a workout in his hotel gym. Aortic dissections occur when the inner layer of the aorta, the large blood vessel branching off the heart, rips and allows blood to surge through. If that ruptures the outer wall of the aorta, it is usually fatal. It’s something doctors he saw that night said should have happened in the immediate aftermath of his ejection, but, inexplicably, occurred almost two decades later. Once again, Udell cheated death and rehabbed his way back to the sky.

In October 2016, after Udell had been back flying commercially as a captain for two years, the FAA cardiac panel revoked his first-class medical certificate (a requirement for airline pilots to fly), citing his aortic dissection in its new classification of him as “high risk.” Without a current “medical,” in aviation parlance, Udell cannot fly – not to make a living as a commercial pilot, not even for leisure.

For the past two years, he’s been embroiled in a battle with the administrative organization to regain his medical, attempting to prove his health and stability with a battery of tests and evaluations from doctors at Mayo Clinic and Barrow Brain and Spine.

“I’m a professional pilot, and there are certain responsibilities that go along with that. I would not think twice about pulling myself out of a cockpit if I thought [my health] was an issue,” Udell says. “I certainly wouldn’t put you or you in jeopardy, or someone’s family.”

The sudden reversal of his classification is what most puzzles Udell. “If I was such a high risk, why was I not pulled off the line immediately? Why was I allowed to continue to fly passengers until the end of the month when my medical naturally expired?” he says. “Am I high risk or am I low risk?”

“It hurts to watch him go through it,” says William Coffey, a Mesa Police Department detective and Udell’s workout buddy. “You’re talking about an extremely unique and gifted pilot who then also, after he did his career in the military, he goes and flies 20 years for [a commercial airline] and now here he is – he’s basically grounded at his house, and it sucks.”

Coffey got Udell into flying remote-controlled airplanes and flight-simulation video games “to keep the mind active and trained on that side while he goes through his trials with the FAA.”

Udell is beleaguered but determined. Various pilot organizations and his airline union have proved unhelpful, he says, so he’s consulted with attorneys, despite worries about onerous legal fees. He’s written to politicians and is even considering running for office himself to effect change in aviation bureaucracy.

“All of this stuff is survivable. You just gotta be willing to fight.”

LONE SURVIVOR
Udell shares his story through the Aviation Speakers Bureau (aviationspeakers.com). Others have ejected at higher Mach numbers, but he survived the highest amount of q (pressure applied to the human body). His injuries: