Kevin Binkley protégé Brandon Gauthier knocks it out of the part in the boss’ former Carefree digs. 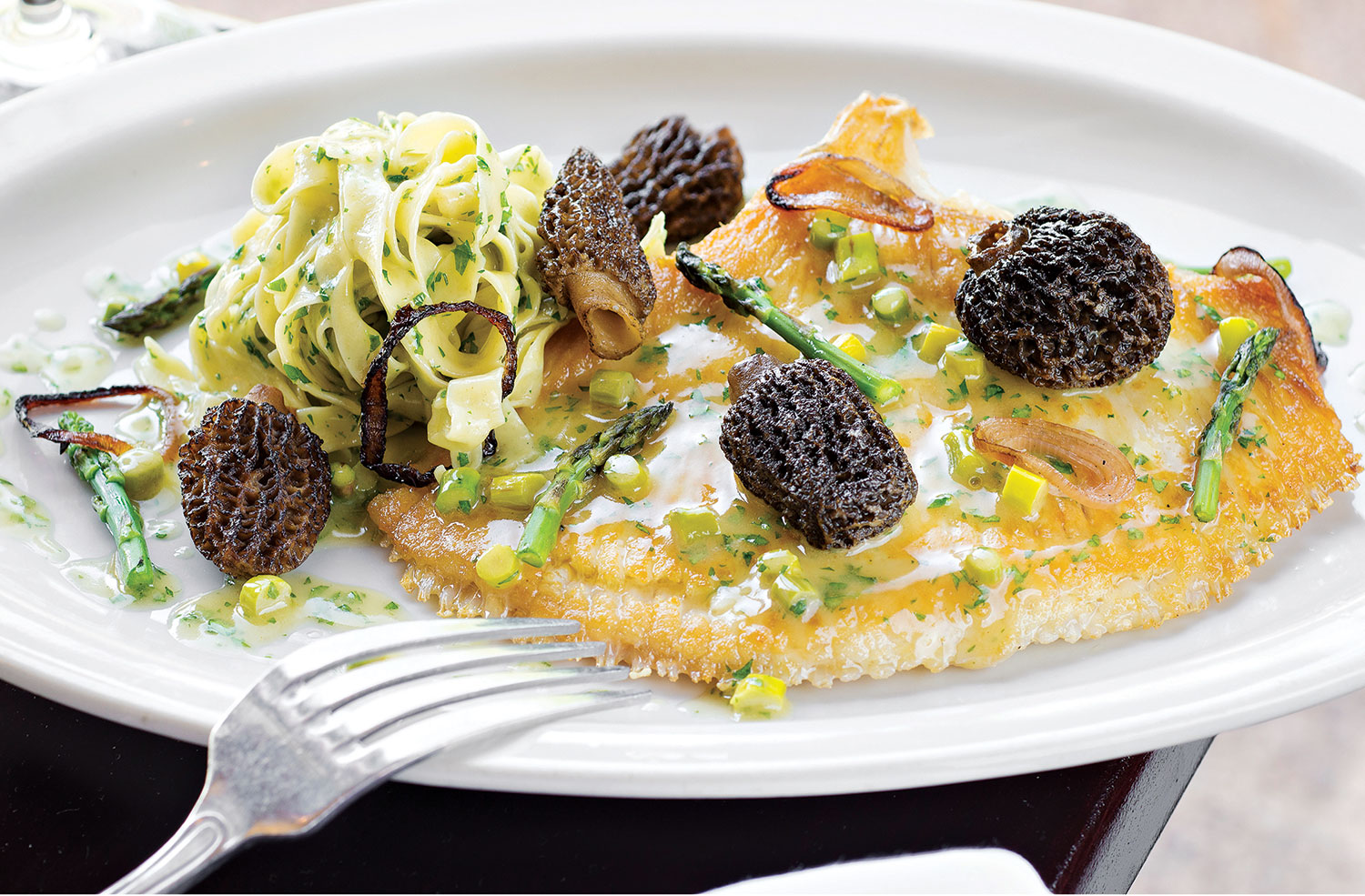 As the detail-driven right hand to Binkley for nearly 15 years, Gauthier – who left the fold two years ago to work at Miraval and The Phoenician – learned the restaurant biz from one of the industry’s leading visionaries, so who better to make nostalgists forget about Café Bink than the man who, ironically, was its executive chef in its infancy?

Binkley, who calls his former adjutant “one of the best cooks I’ve ever worked with,” sold Café Bink to Gauthier and his wife, Tori (former wine and cocktail maven at Binkley’s), last winter, after a sweat-equity partnership with Justin Olsen – yet another Binkley’s alum – didn’t pan out. The couple operated the restaurant as Café Bink until June, when they closed for three weeks of refurbishing, quietly opening Confluence in mid-summer. Three very early visits in, I’d say the place is damned near perfect, easily the best new restaurant of 2018. So why wait to spread the good word?

To be perfectly clear: Confluence is not some half-baked iteration of Café Bink – though the footprint, the casual bistro vibe and the overarching philosophy are essentially the same. It’s an upscale neighborhood restaurant for the guy who wants steak and potatoes and a destination restaurant for the food freak who favors obscure ingredients, gorgeous composition and French technique. In that sense, Confluence is a bit like Café Bink and Binkley’s eponymous flagship restaurant combined, although Gauthier’s sophisticated food comes from his own personal playlist, which skews more soulful than cerebral. 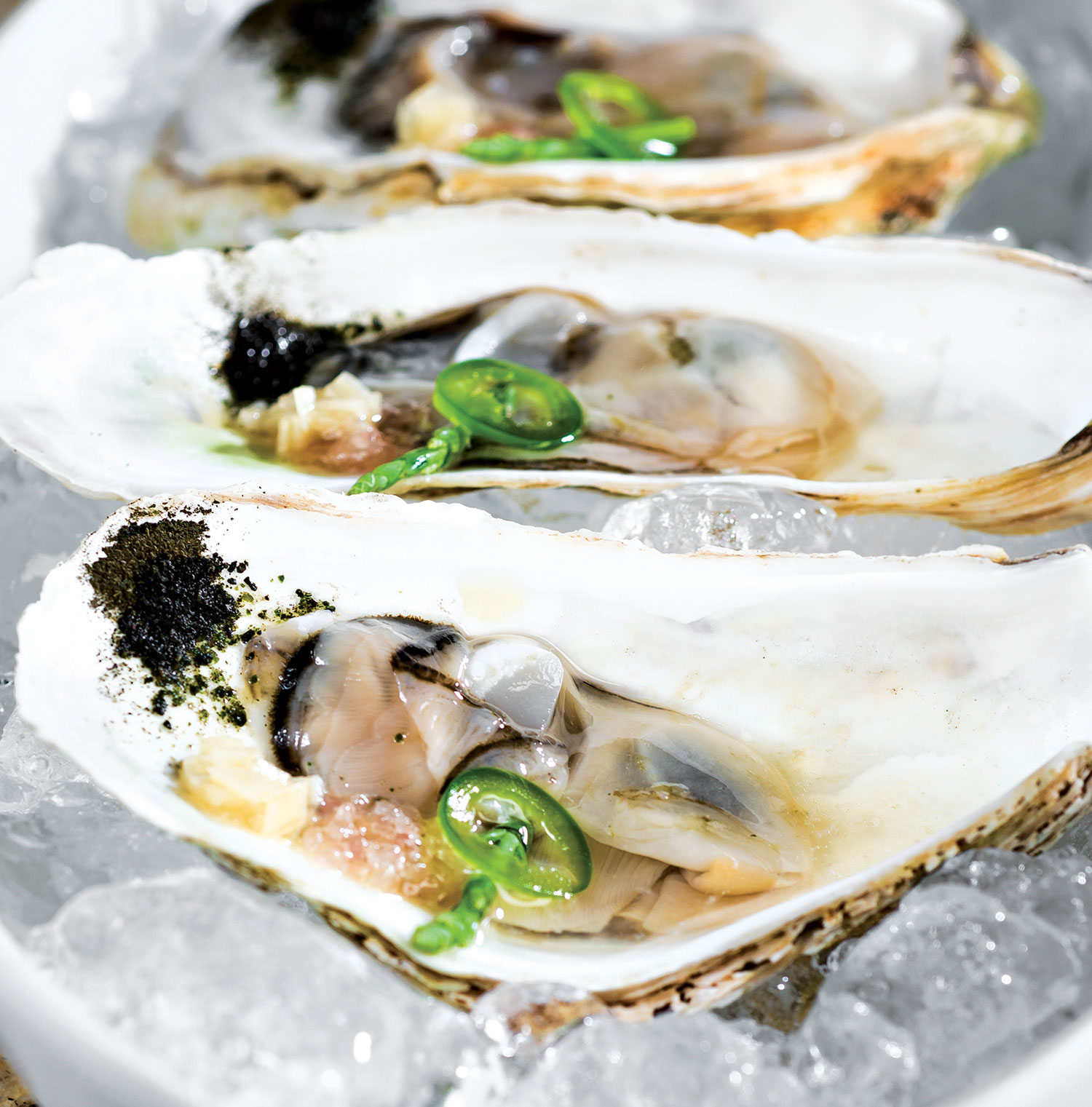 The oohing and aahing commences the instant the bread hits the table – maybe a fluffy, dill-scented potato roll with salmon mousse; or cake-like brioche with duck fat butter; or herbed focaccia with clear, warmed beef tallow (think of it as olive oil for carnivores).

From the cold appetizers section – a menu arrangement that recalls the original Cave Creek Binkley’s – come three Malpeque oysters on the half shell, each garnished with one tiny sea bean, a spray of glistening finger lime seeds, a sliver of serrano chile, a dot of pickled ginger, a sprinkle of dry-roasted kombu and a splash of ponzu. Slurped straight from the shell, the oysters offer an object lesson in Japanese restraint, deliciously evoking the ocean – clean, bracing and briny. Scallop crudo – a cool, colorful arrangement of sweet, white scallops, baby beets, arugula and avocado – exudes the Japanese ethos as well. Decorated with a bright green swish of fresh wasabi, the plate is reminiscent of a carefully composed sushi platter.

Seared foie gras, burnished at its edges, rests atop a swath of port-sparked strawberry sauce, its sweetness amplified by pearl-like sugar snap peas and knobs of grilled strawberry. Nasturtium leaves add peppery notes. Meanwhile, the dish of ancient grains I thought would be a crunchy-granola snooze is fantastic, combining grilled leeks with a rich sunny side up egg yolk cured in red pepper and crackling brown-butter breadcrumbs. 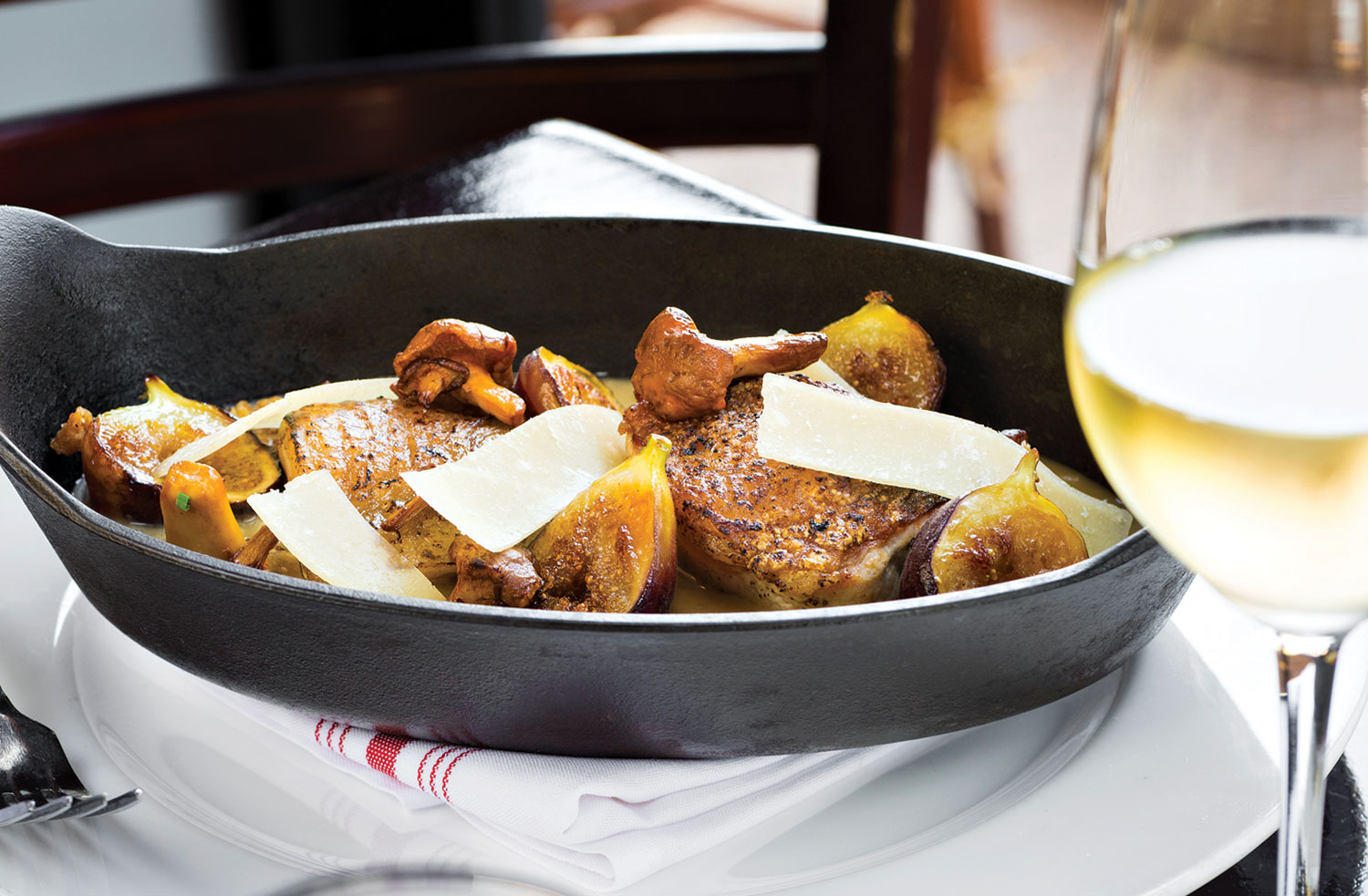 Entrees are every bit as exciting, a statement I seldom make. Tops on my list: roasted guinea hen breast and confit leg set atop creamy Parmesan risotto studded with figs and chanterelles, the risotto draped with shaves of buttery Parmesan for extra richness. This luxurious little number could easily stay on the menu through the winter. Sadly, that isn’t true for wild Alaskan halibut, pan-seared to a golden brown and set over a bed of sweet corn with lightly fried okra and nubbins of fatty, salty Ibérico chorizo, a dish that embodies summer. 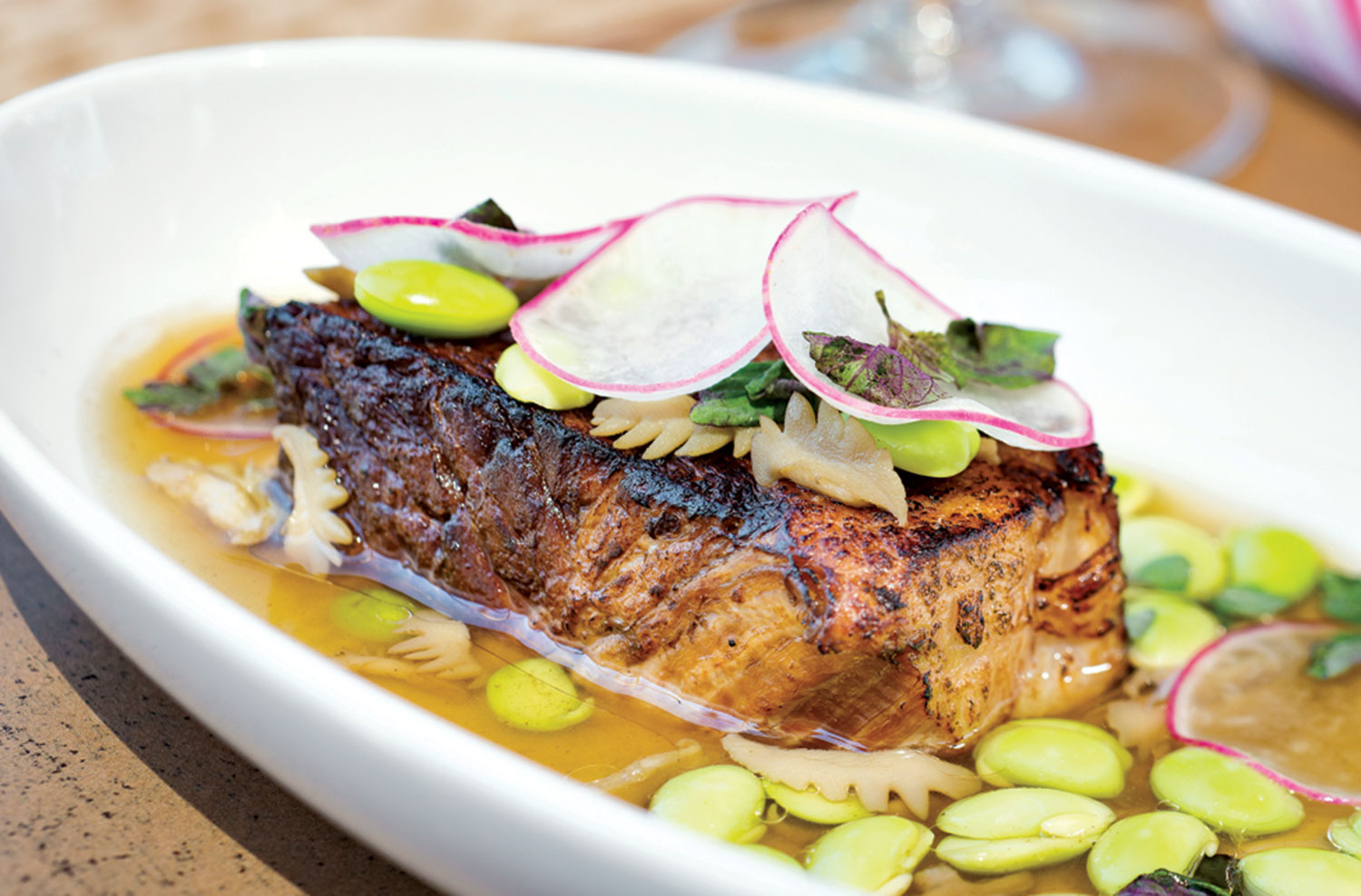 Lunch, which is more casual and affordable, is no less outstanding. Many of my favorites will be out of season by the time you read this: juicy heirloom tomatoes, for example, with fresh herbs and crusty bread in a riff on panzanella; a Japanese-inspired salad of heirloom cucumbers, tossed in a light dressing that bears the saltiness of miso and the nutty depth of sesame oil; chilled yellow watermelon soup with bits of grilled apricot and pickled cherry arranged at the bottom and edges of the bowl; and a dish of fresh corn with salty, ham-like speck, asparagus, chanterelles and creamy fingerlings so off the hook I dream about them.

The good news is: Excellent grilled red snapper tacos, dripping with crème fraîche and bulging with cabbage, cilantro and onion, will survive the seasonal menu change, as will the best chicken sandwich in town – a messy, gooey, pan-fried melt of roasted chicken chunks, salty crisps of pancetta, caramelized onion and Fontina cheese on a toasted challah bun. Ridiculous. For sides: house-made barbecue chips and Bink’s famous twice-cooked fries with three dipping sauces (the sole survivor from the original restaurant).

Gauthier may not be a celebrity chef, but if he keeps this up, he’s going to be. He just needs to lose the modesty. It’s totally unwarranted. 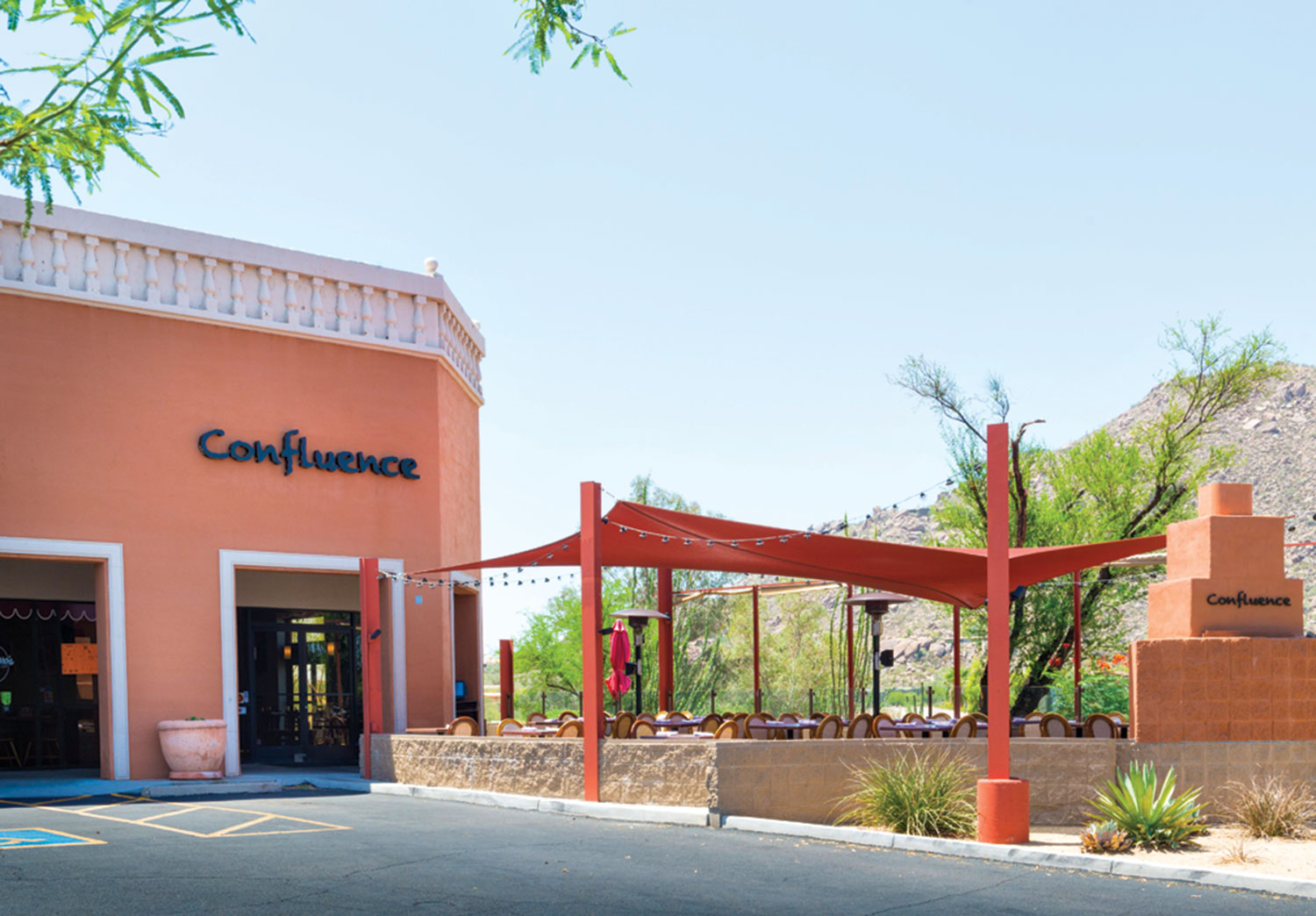