La Chana–In the middle of this documentary about the famed Spanish-Romani flamenco dancer Antonia Santiago “La Chana” Amador, we meet her seemingly very sensible daughter, who remembers seeing her perform as a 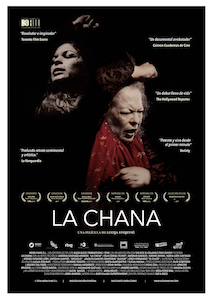 child. She says she found it frightening to watch her mother in the grip of a force of nature; she worried it would destroy her.

It’s easy to understand this reaction. The clips we’re shown of the title character’s performances are mesmerizing. Flamenco as we traditionally imagine it, at least in this country, is tempestuous and passionate in a stylized manner that can verge on quaintness. La Chana’s improvised dances are apocalyptic in their intensity to a degree that shuts down any such patronization. Her dazzlingly fast, percussive and precise footwork is like a safety valve releasing a volcanic internal pressure that shows up on her face almost like bereavement, or possession. She’s a magnificent actress, who uses the soles of her feet to tap out an all but Shakespearean text.

The director, Lucija Stojevic, strings La Chana’s biography along sequences of her current home life in Barcelona, with her placid, supportive second husband, a fishmonger named Felix Comas. As she prepares for a swansong performance in her sixties, dancing while seated due to a bad knee, Stojevic takes us through her youth, dancing for her uncle and mentor, a guitarist known as “El Chano,” her rise to fame, her appearance in the 1967 Peter Sellers comedy The Bobo, her tours and television appearances. Gradually we learn that, something like Tina Turner, the emotional potency of her work may have derived from domestic terror.

Despite this poignancy, the film isn’t depressing, not just because of the happiness that La Chana has plainly found later in life, but because she comes across as such an endearing person. Whether she’s watching a nature documentary on TV from a recliner, or bickering with her daughter over whether it’s all right to slip her little poodle a bit of lobster, or trying (pretty hard) to steal a bite of ice cream, she does it with the grandly theatrical style of a true diva, in the best sense of that ill-used term.

La Chana plays for one show only, at 3:30 p.m. Sunday, September 30 at FilmBar. Flamenco dancer Carlos Montufar is scheduled to perform before the show, and a portion of the proceeds from ticket sales will benefit the Phoenix World Arts Collective.