Is fine dining dead? The once hotly debated question seems ridiculous as I look around the beautifully appointed Café Monarch in Old Town Scottsdale – a classic fine dining restaurant, busy in the middle of the week, cranking in the dead of summer, alive and well against all odds and sage predictions.

Just as surprising, at least to me, is that this tony haute spot has any connection to the small, charming cafe I knew eight or 10 years ago. Back in those days, Monarch was owned by Chris Van Arsdale, a talented, improvisational free spirit who did his own cooking, serving, busing, the whole exhausting shebang, until growing word-of-mouth forced him to take on help. Ultimately, Van Arsdale burnt out on the restaurant, and Christian Lewkowicz – who worked for him the previous season – enlisted members of his own family to help him buy Monarch in 2013. Late last year, the Lewkowiczes – led by patriarch and executive chef Gustavo – moved the operation into a former designer showroom directly across the street, adding a gorgeous bar, patio and extensive wine cellar boasting close to 2,000 bottles.

It’s a completely different restaurant now, and frankly, the word “café” is a misnomer. Everything about this ritzy, reborn operation signals fine dining, from the Tuscan columns and genteel atmosphere to the knowledgeable, attentive waitstaff and well-versed sommeliers. The seasonally inspired prix fixe menu is sophisticated, and the labor-intensive food is both well-executed and beautifully presented. 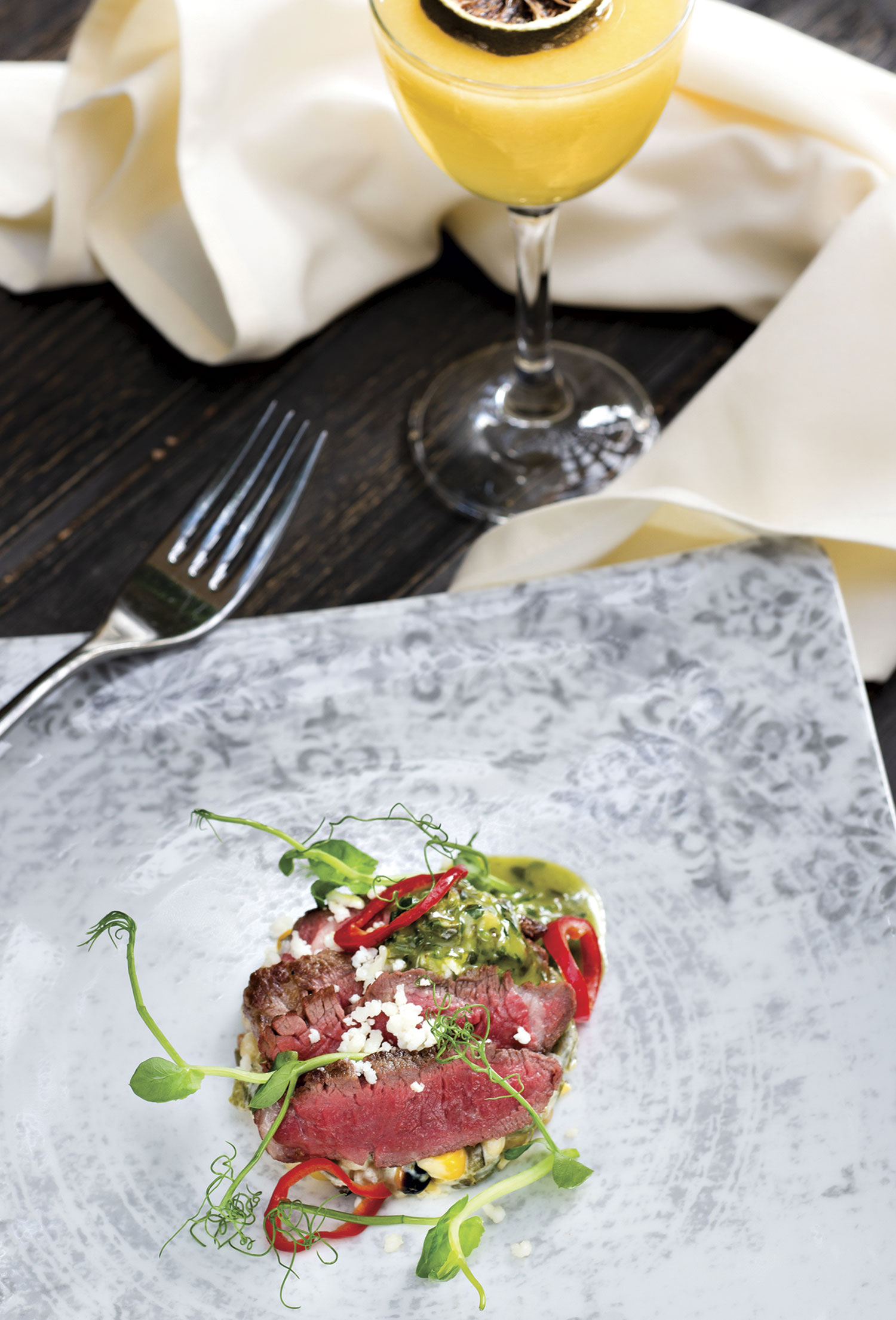 Oddly enough, print and online media have recognized Café Monarch repeatedly for its romantic ambiance – it seized the title of Yelp’s “No. 1 Most Romantic Restaurant” in the country last February – but nobody raves about the food, and they absolutely should. It’s terrific, the result of ongoing collaboration between co-owner Gustavo and chef de cuisine Ryan Pitt, who earned his chops at Citizen Public House and The Gladly before coming on board late in 2017. Together they’ve created a thoroughly modern global menu that nimbly hops from Italy to Peru to Japan to the American Southwest without reading like a fever dream. Challenging but ultimately grounded in reality – just as fine dining should be.

Four-course dinners are variously priced, depending on which entrée among seven you choose for your fourth course. Options range from $80 for a pork tomahawk denouement to $140 for a 24-ounce prime bone-in ribeye (all courses included). Tack on wine pairings at $90 per person plus an add-on for fun ($30 for charred octopus, $80 for Wagyu New York striploin, for example), and the final bill for two can climb well past $500. For those of us who aren’t CEOs, it’s breathtakingly expensive but well worth it for a special occasion. A caveat about the wine pairings, however: polish off every generous pour that’s placed before you and you’ll leave somewhere between tipsy and trashed. So plan on taking an Uber, because exploring Monarch’s deep, interesting, often idiosyncratic wine list – expertly matched by people who know wine (every server is a Level 1 somm or above) and love to talk about it – is a blast.

You do have to make your own decisions about what to eat, but if there are two of you, it’s fun to order everything – there are two options for each of the first three courses – and share. Yellow tomato gazpacho, a summery first-course choice, is a cool, velvety bowl of bright yellow tomato purée topped with avocado, micro-greens and the pearl-like pulp of finger limes (called “fruit caviar”) which bursts in the mouth with tiny explosions of citrus flavor. Red shrimp from Argentina, placed at the center of the bowl, are firm, sweet and almost lobster-like in taste and texture. It’s gazpacho on elegant steroids. Enjoy it before Gustavo and Pitt rotate out the current dishes for their fall menu. 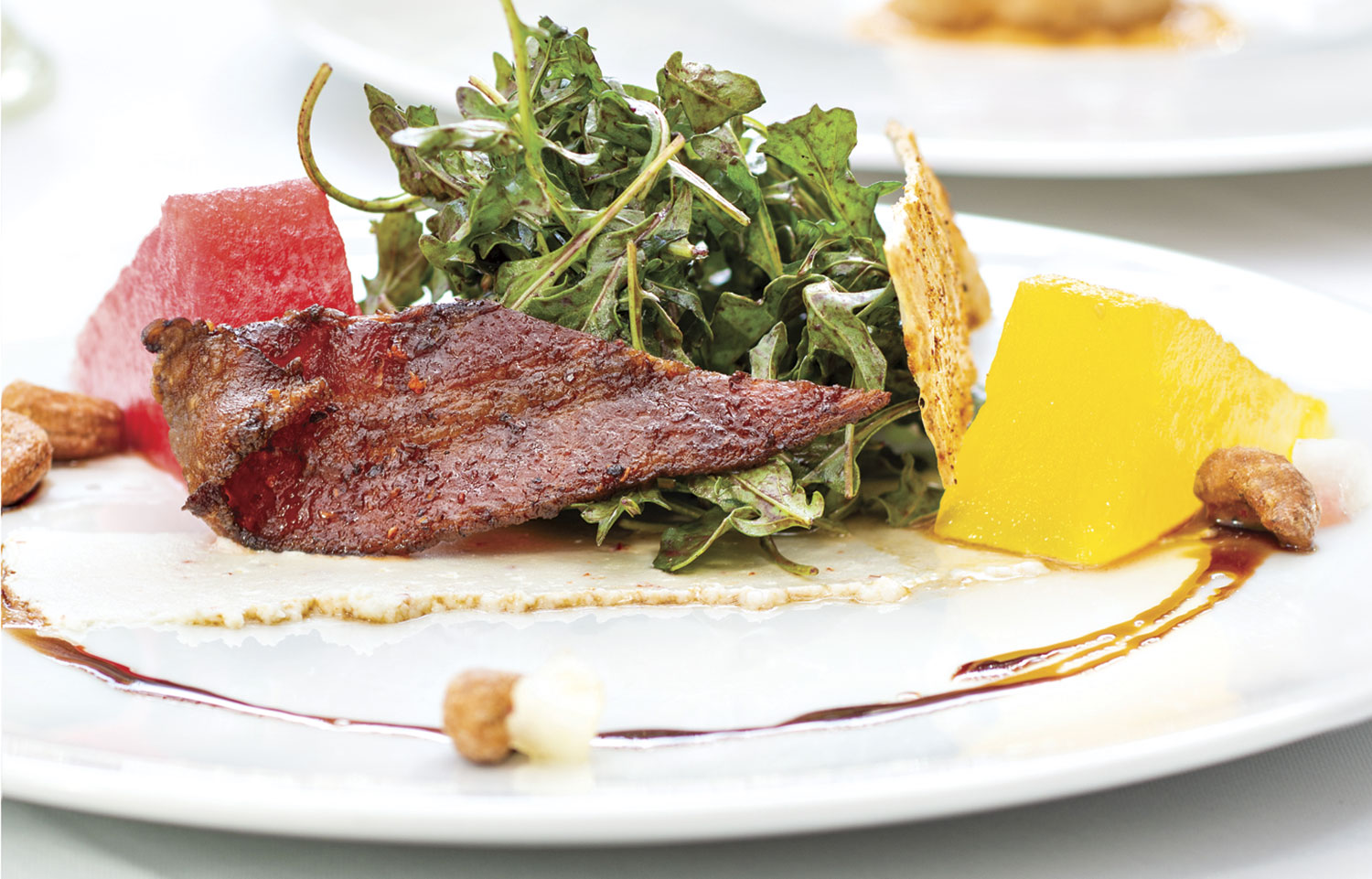 The other first-course choice – a tiny squash blossom relleno, swathed in a delicate veil of crunchy, tempura-like batter and set atop an earthy smear of black bean purée – puts a Southwestern spin on what has become a Cali cliché. Stuffed with mild, stringy Oaxacan cheese instead of the usual chèvre, it’s brightened with pickled red onion and deepened with faintly spicy New Mexican chile sauce. It’s flawlessly executed and delicious, combining wispy crunchiness and a
satisfying, gooey blast of umami. 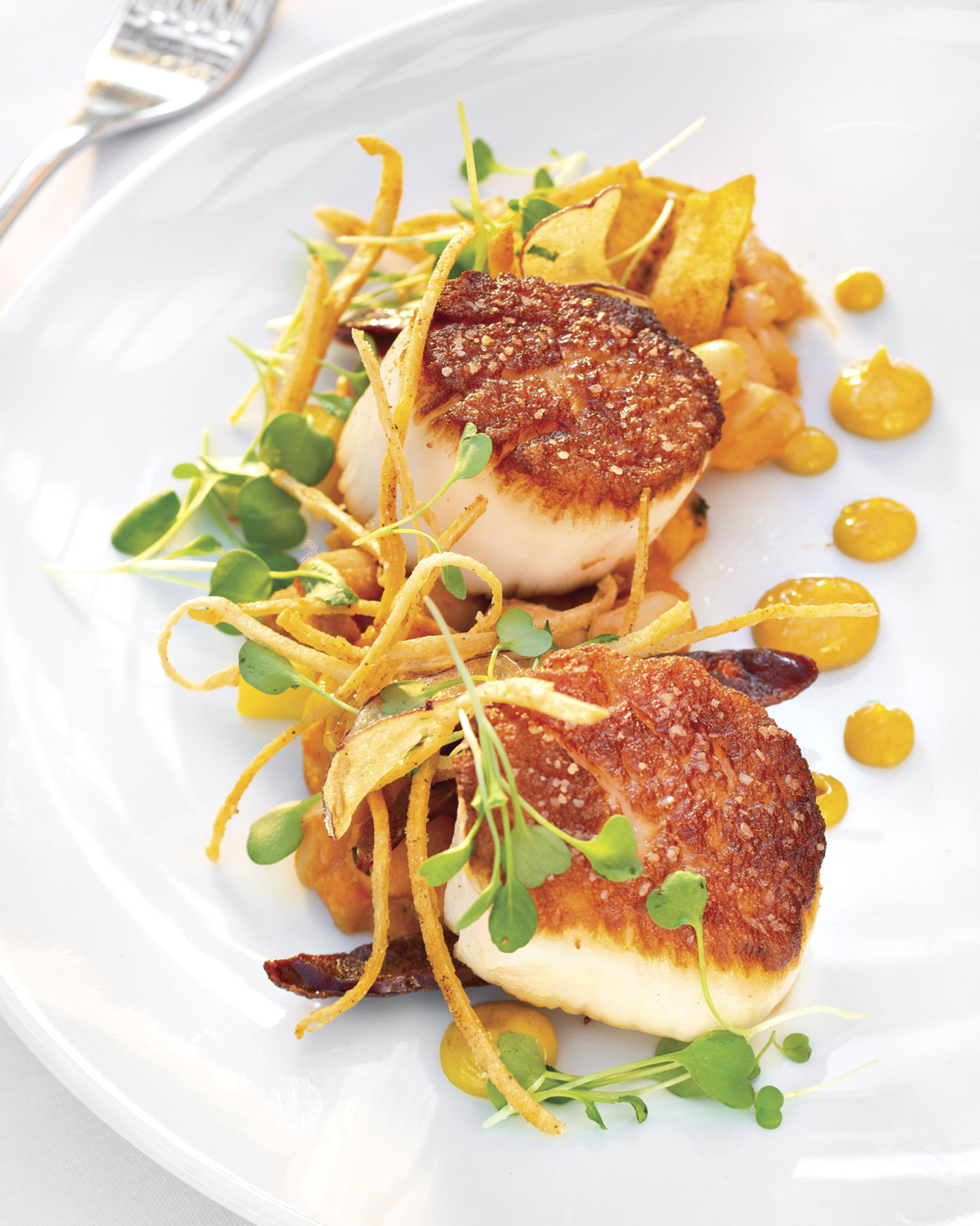 The third course (one surf, the other turf) is the biggest knockout. Which sounds better: melt-in-the-mouth tenderloin tips, drizzled with bright, herbal chimichurri and set atop a bed of nutty fregola Sarda (a crispy cousin to couscous), the whole dreamy thing enriched with crème fraîche; or an elevated, deconstructed spin on the spicy tuna roll? Imagine yellowfin tuna sashimi, set atop a pedestal of caramelized sushi rice, spooned with jammy apple-tare sauce (sweetened, thickened soy sauce) and dotted with dabs of orange masago (tiny, pop-bead-like roe). Calabrian pepper aioli adds a touch of richness and heat.

I’m completely smitten with the white king salmon offered for the fourth course. Prized for its delicacy, the buttery fish rests on a faintly crispy bed of potato-crab hash, sided with creamed corn, leeks and sweet Peppadew peppers. Dreamy Meyer lemon-pink peppercorn beurre blanc puts this already rich dish right over the top. Our other main – a meaty pork tomahawk boosted with umami-rich pork demi-glace – really can’t compete, even though it possesses plenty of flavor and texture contrast, thanks to basmati-rice-summer-corn succotash, crispy, agreeably starchy plantain (my favorite part), smoky charred shishitos, avocado and pickled Fresnos. I find myself pining for another inviting-looking entrée – bucatini ai frutti di mare, combining scallops, King crab, Maine lobster and Tiger prawns – but I’m already well over my review budget. Another time, for sure. 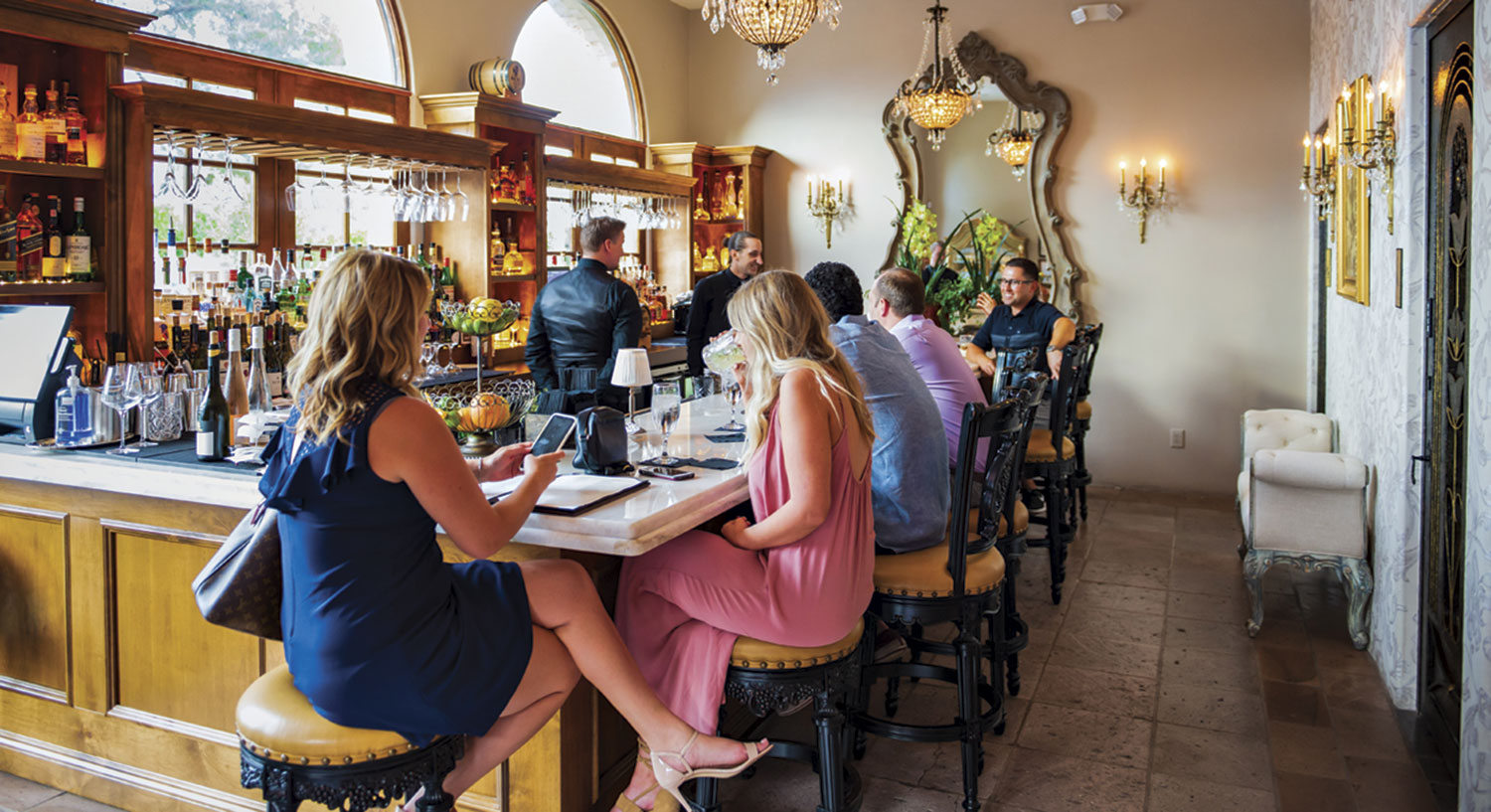 At the end of the meal, I marvel that I’m so late in getting to this party, but never mind. I intend to make up for lost time – when I can afford it. And that’s the rub, of course. Has classic fine dining become “a niche for the very wealthy,” as GQ food writer Alan Richman gloomily predicted? Far be it from me to say whether Café Monarch should be locked away in that gilded ghetto, but if you are the type of person who is willing to drop down multiple Benjamins for the right meal, I have a feeling you’ll consider it money well spent.