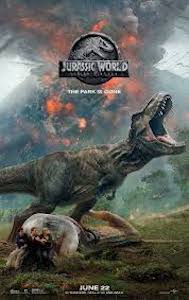 Jurassic Park: Fallen Kingdom—This fifth entry in the series about the colossally ill-conceived theme park employs one of the oldest plot devices in the lost world adventure genre: the volcano that wipes the whole place out. But while t’s traditionally used at the end of the story, as a deus ex machina, here the eruption is just the appetizer course.

Bryce Dallas Howard and dinosaur whisperer Chris Pratt, from the previous film, are sent by a rich guy (James Cromwell) into the ruins of the old park to rescue as many of the genetically-engineered dinosaurs as possible, including Pratt’s beloved trained velociraptor Blue. The resulting spectacle involves the huge reptiles stampeding away from volcanic clouds, or dangling from helicopters like the statue of Jesus in Fellini’s La Dolce Vita.

But our heroes soon learn that treachery is afoot, and that both they and the dinos are imperiled by creepy traffickers, rogue geneticists and yet another hybrid super-dino. A couple of new heroic characters, including a rather fabulous dinosaur veterinarian (Daniella Pineda), a shrieking computer whiz (Justice Smith), a little girl (Isabella Sermon) and her stern but caring nanny (Geraldine Chaplin) are also woven into the tale.

Directed J. A. Bayona from a script by Colin Trevorrow and Derek Connolly, this is easily the silliest of the series, with wild, over-the-top action set pieces and a brazen indifference to plot holes. But it isn’t dull, and it can’t be called unimaginative, either. Several characters meet with gruesome fates, but it’s mostly the odious bad guys, so it’s not too upsetting. The cast is appealing—Pratt is one of the better self-deprecating swashbucklers in a long time, with hints of the charm of both Errol Flynn and Burt Reynolds—and the dinosaurs are richly characterized.

Indeed, the dinos are so sympathetic here that a forewarning is order: They suffer terribly in the course of the story, and a number of them come to violent, tragic ends. If you take a dinosaur-loving kid to Jurassic World: Fallen Kingdom, you may have to deal with their Old Yeller moment.

The Misandrists—Definitely not for the kiddies is this feature from writer/director Bruce La Bruce, opening less conspicuously than Jurassic World this weekend at Harkins Valley Art in Tempe. It’s set in a private school for girls that’s 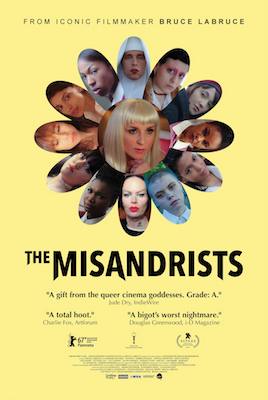 actually a front for a radical feminist organization, with the leaders disguised as nuns, in 1999 in Germany, or, as the subtitle puts it, “Ger(woma)ny”.

Two of the students find a young male anarchist, wounded while fleeing the authorities, smuggle him into the school’s basement, and tend his wound. Needless to say, trouble ensues.