“Phoenix” and “vibrant Chinese food scene” have never felt comfortable in a sentence together, but our sorry state of Sino-culinary affairs is rapidly improving as regional Chinese restaurants spring up across the East Valley like wood ear mushrooms on a log. China Magic Noodle House, Chou’s Kitchen, Beijing Noodle House, Chengdu Delight, Nan Zhou Hand Drawn Noodle House and Original Cuisine are the notables who’ve helped bring about this sea change, introducing us to obscure and sometimes challenging dishes that serve as delicious reminders of China’s vastness and culinary diversity. 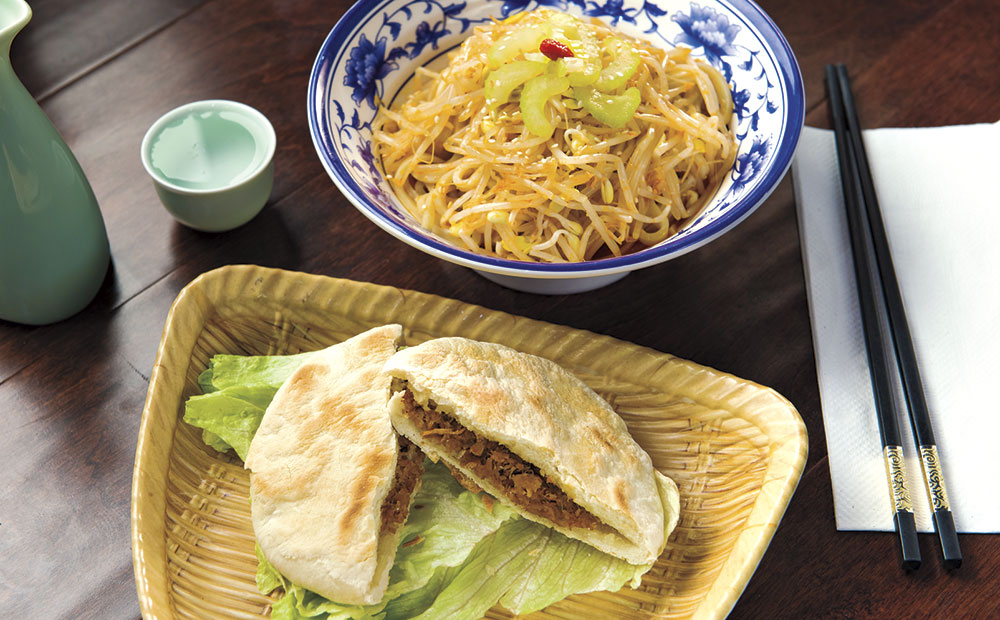 To that laudable list of game-changers, we can now add Mesa’s Shaanxi BiangBiang, a cordial operation run by restaurateur Changhai Huang, who caused a minor sensation two years ago when his since-rebranded House of Egg Roll in Chandler landed in the pages of Time Out. Specializing in the hearty cooking of Shaanxi province in north-central China, the new place definitely warrants a visit – not because it’s 100 percent amazing (to my laowai white-girl taste buds, it’s not) nor because it’s 100 percent authentic (you’ll find chop suey and coconut shrimp on the menu), but because so many of the offerings skew toward little-known Shaanxi dishes we’ve never seen before.

After three visits to the restaurant, I’m convinced that Shaanxi is a bit like the American Midwest, a wheat-growing region famous for belly-filling comfort foods centered around bread, noodles, meat and potatoes. Of course, Shaanxi’s proximity to Sichuan province means that many dishes also deliver red chile heat with flourishes of vinegar, garlic, cumin and cilantro – a flavor profile you’re not likely to find in Fargo or Wichita anytime soon.

From the appetizer section come thick, crisp-skinned slices of fried chicken, served with sides of sweet and sour sauce and a salty, fiery mix of dried spices for dunking, offering familiarity with a dash of sex appeal. I like this dish for its blast of sweetness, salt and spice, but my dining companion is considerably less enthusiastic. Barbecue lamb kebabs (a cultural crossover from Shaanxi’s Muslim population), come heavily seasoned with the same spice mix, a salty, addictive snack I can imagine popping by the dozen over a few Tsingtao beers (which is exactly how they’re eaten in Xi’an, Shaanxi’s capital). Alternately, my friend claims they’re over-seasoned – way too salty and spicy to suit him. On my second visit, I take my offal-loving love interest for a go at barbecue tripe, chicken gizzard and chicken heart kebabs, and this time, there’s no debate: They’re so heavily dredged in seasoning we can’t even eat them. If not for their various shapes and textures, they’d be indistinguishable. 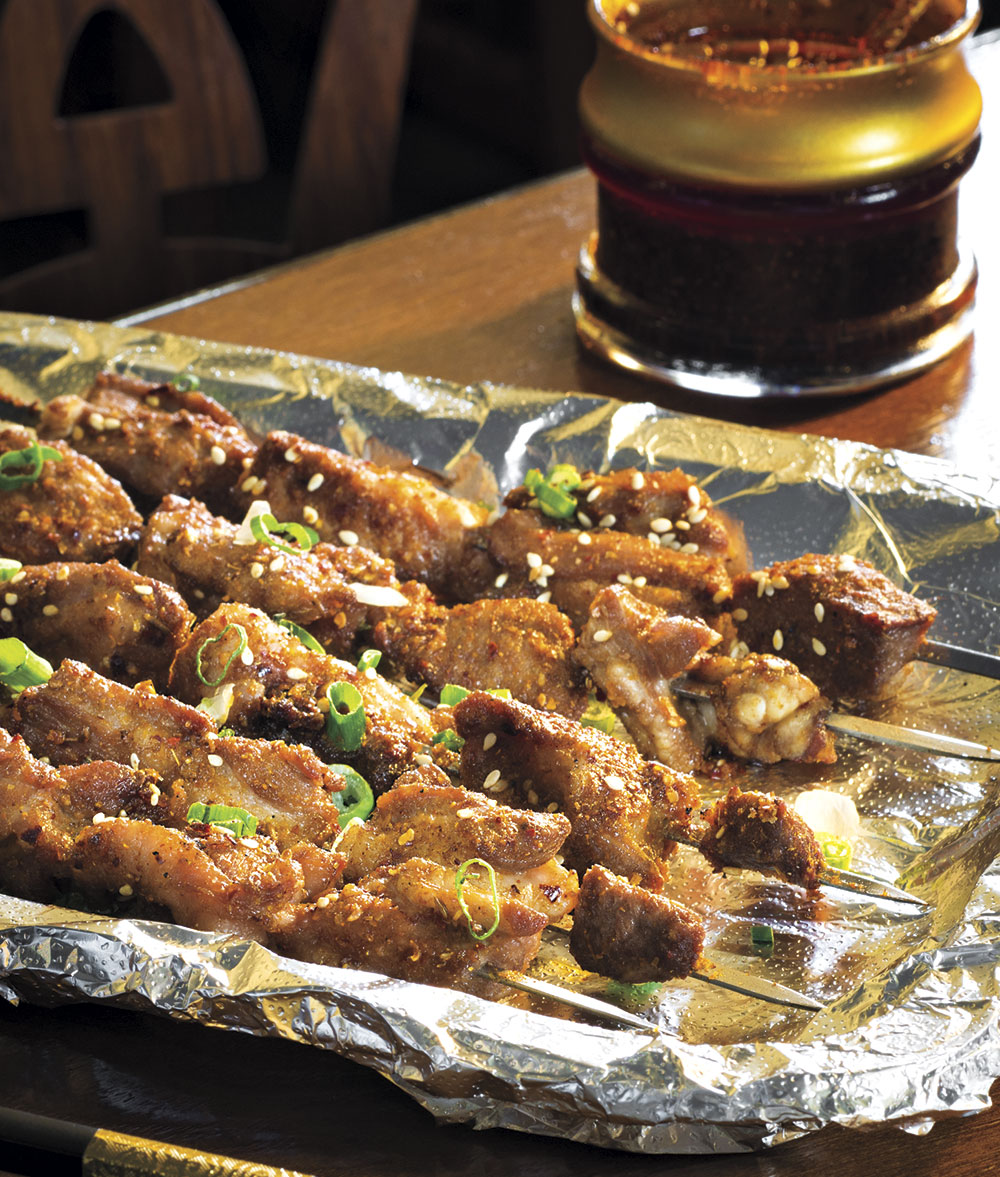 We have splendid luck, however, with roujiamo, another popular street snack dubbed “Shaanxi-style burger” on the menu. It’s really more like a sloppy Joe, made with braised and chopped meat (choose among stewed pork, spicy pork or lamb) bathed in a deep, soy-based gravy perfumed with cinnamon, clove and star anise. Tucked inside a slightly flattened, crunchy flatbread called mo, the lamb version, aromatic with cumin, is a little spicy, a little greasy and absolutely delicious. In comparison, the spicy pork meat, with its pleasant barbecued flavor, seems a bit dry. Roujiamo’s classic accompaniment is liangpi – slippery, flat noodles of varying widths, served cold in a stinging sour sauce of vinegar and chile oil loaded with garlic. Bean sprouts and celery add crunch to one of the cheapest and best dishes on the menu.

Hand-made biangbiang noodles – flat, wide as a belt and easily two feet long – look like pappardelle on steroids. As the starchy, springy underpinning of many Shaanxi dishes, they show up in various permutations here. My favorite is the simplest of the lot, plain white noodles brightened with steamed bok choy and accompanied by a bowl of sharp, oily, soy-based dipping sauce, heady with garlic, cilantro and green onion. The noodles, which slowly morph from slick to sticky as they cool, are impossible to eat gracefully, but they’re well worth the embarrassment. The same noodles (named for the sound they make when the noodle-maker slaps them on the table) show up in another classic Shaanxi dish simply called biangbiang. It’s a soothing stir-fry of slowly cooked pork, bok choy, tiny cubes of soft potato and carrot, all neatly arranged over the noodles with a bit of umami-rich sauce at the bottom of the bowl. However, spicy oil-seared noodles – the same dish jacked up with red chile – offers a bigger biangbiang for the buck.

Noodles find their way into nourishing soups as well, including Shaanxi’s famous Xi’an pao mo, composed of lamb, glass noodles, crunchy wood ear mushrooms and tiny glistening cubes of pita-like bread, which take on a spongy, gnocchi-like quality in the broth. Another lamb soup, this time made with rice noodles, is as mild and wholesome as your grandma’s chicken noodle.

I watch a Chinese family dig into Four Bowls of Happiness with relish and feel vague bemusement when the comfort food dish fails to evoke similar elation in me. Tender and well-seasoned meatballs, marinated tofu, soy-moistened pork belly and strips of stir-fried beef (vaguely reminiscent of Swiss steak) are pleasant enough, but so plain-tasting I probably wouldn’t order them again. I have a similar reaction to fried potatoes with vinegar, a dish I fully expected to love. Softened slivers of potato, sprinkled with vinegar and strewn with dried red chiles, don’t look or taste fried at all, possessing only a slick of oil as proof. 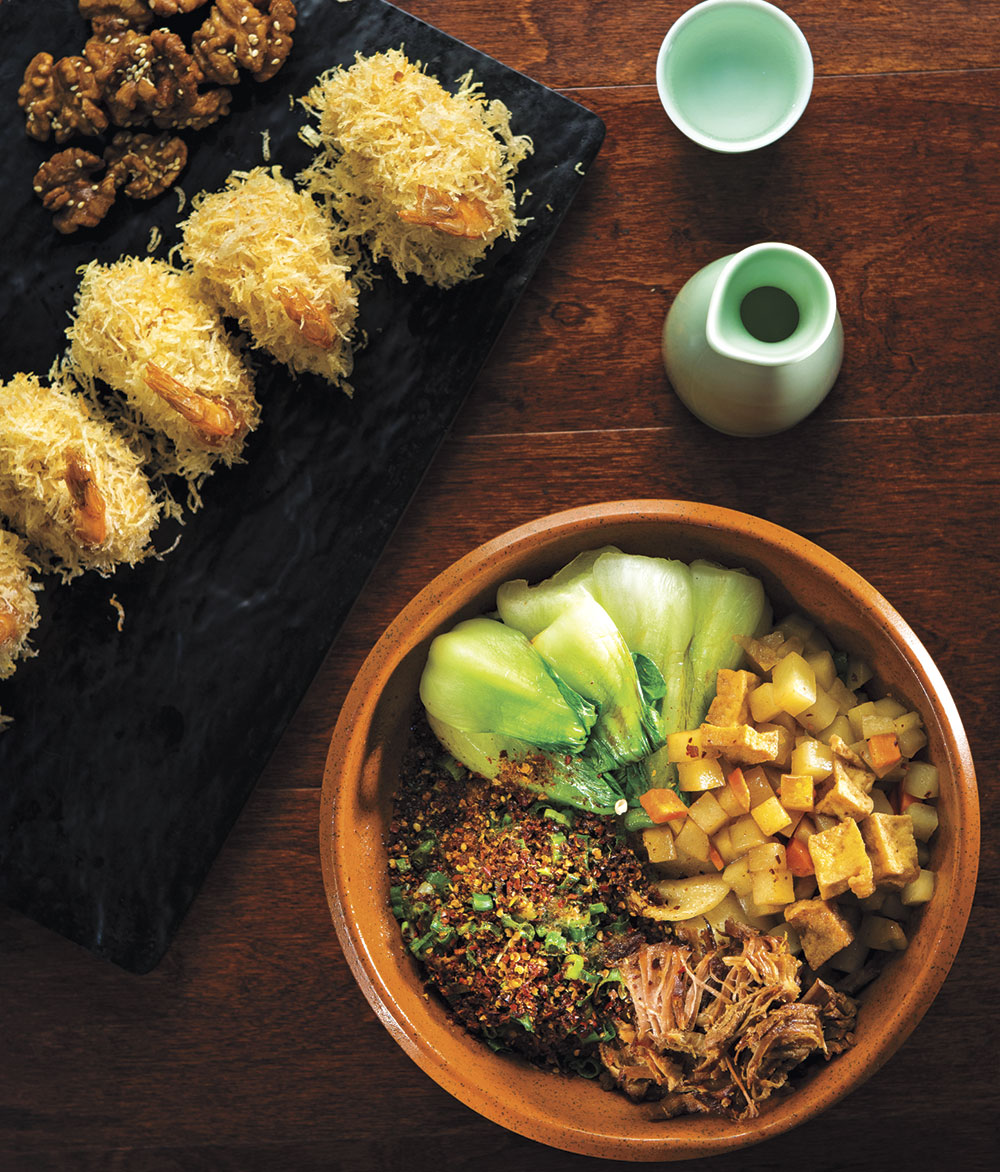 We veer way off the Silk Road – on which Xi’an was a stopping-point – for walnut shrimp, a Chinese-American banquet standby I haven’t eaten in years. But the picture looks promising and our waitress raves about it, so I’m in. Alas, the mayonnaise that coats the fried shrimp is too lavishly applied for even a mayo freak like me. Nevertheless, I love the dish’s textural contrast, including a feathery flurry of crispy potato threads and sesame seed-flecked candied walnuts.

Sliced beef tongue, served smoking and sizzling on a gimmicky short-handled shovel, could more readily pass for fajitas than Mongolian beef, and the tough meat is overshadowed by an avalanche of stir-fried jalapeños. They taste good, but it’s too much – even for my fire-eating sweetheart. To our disappointment, the “double flavors flying lamb” is the same dish with lamb, this time served with pita to build your own… tacos?

I’m happy Shaanxi BiangBiang exists, and I wish I could say I unabashedly love it – but I don’t. It’s merely “frequently good.” But hey, take my culturally biased, laowai-ass opinion with a grain of salt and a dash of dry spice and go see for yourself. 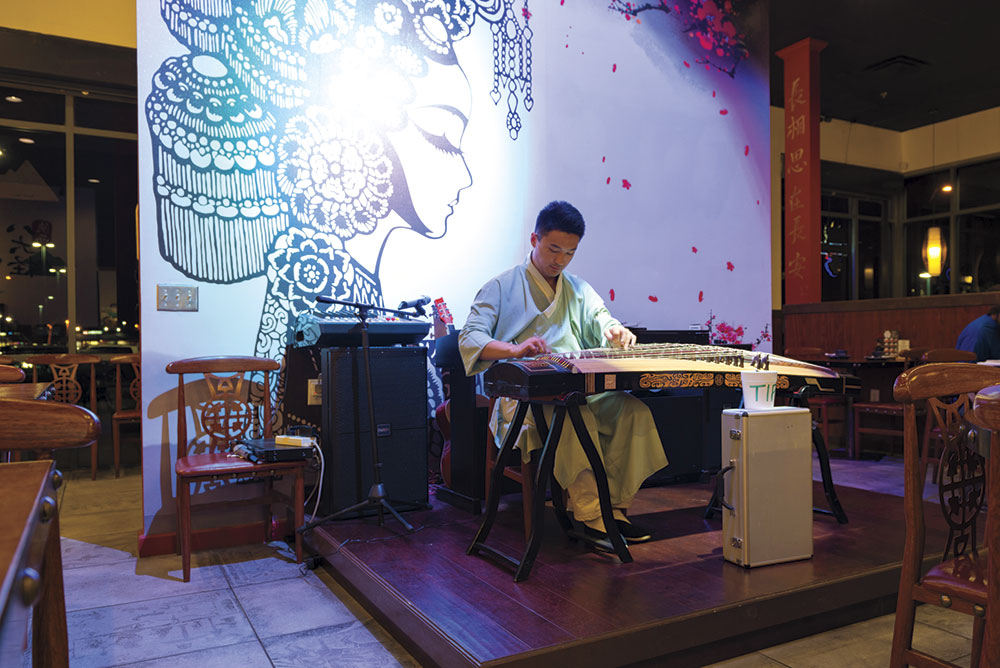