When Sister Adele O’Sullivan walks through Circle the City’s medical respite center in Central Phoenix, she links everyone together in a chain of hugs. The soft-spoken 67-year-old has a gentle presence and an unassuming air, yet the second she steps into the treatment rooms, the nurses exclaim, “Hello, Sister!” and wrap their arms around her. A few steps later, a doctor embraces her and tells her how often she thinks of her. In the hallway, a man tells her he’s moving next week into a West Valley community. “You got your own apartment? Yes! Congrats!” O’Sullivan cheers and hugs him.

Everyone’s excited partly because they haven’t seen O’Sullivan much lately. She’s been shepherding the expansion of the nonprofit’s human services center Downtown. In December, the Maricopa County Department of Public Health contracted Circle the City to provide countywide health care for people experiencing homelessness. The $3 million contract, renewable annually, will fund a new 50-bed respite center and the group’s services, from a mobile clinic to outpatient facilities. They hope to serve more than 10,000 people each year – double their current capacity.

Since its founding in 2012, CTC has had remarkable success: 75 to 80 percent of people discharged from its respite center move into transitional or permanent housing. O’Sullivan says that’s because each patient is given the opportunity to heal and embraced with individualized support and love.

It takes a village of volunteers, employees and donors to create such an organization. But there’s no question it all sprang from O’Sullivan – well, O’Sullivan and her shoebox.

The Los Angeles native became a nun at 18 because, she says, “I just knew it was the right thing to do.” She chose the community her aunt belonged to, the Sisters of St. Joseph of Carondelet, which focuses on outreach and does not require nuns to live in a convent or wear habits. “We were founded to go out to the streets and be present with the people, especially the poor,” O’Sullivan explains. “In being present with them, we would find out what we needed to do. We are ‘meeting the needs’ sisters.” 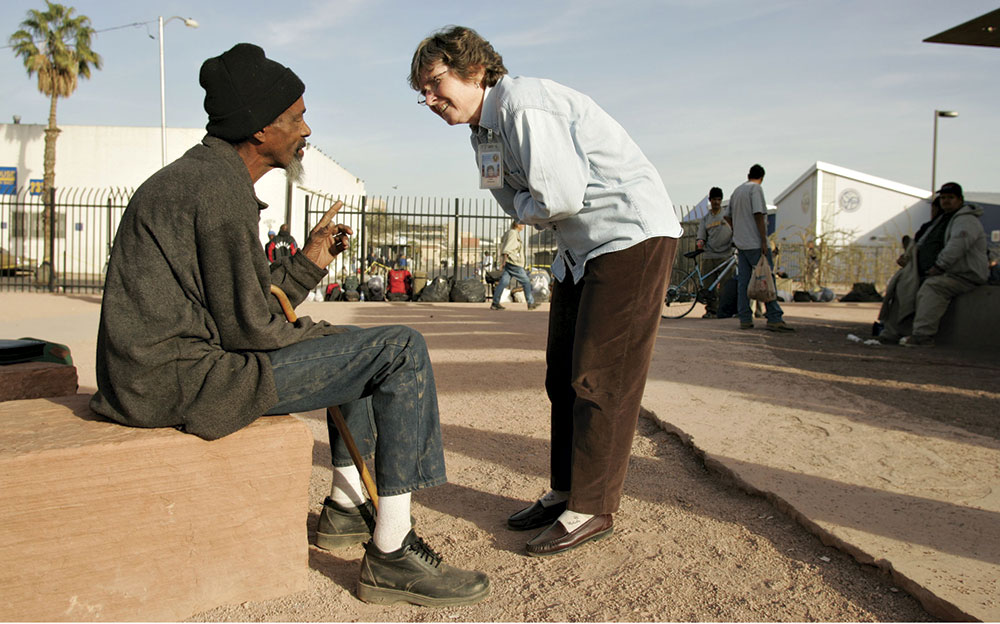 At first, the nun met needs by majoring in pharmacy studies at University of Arizona and practicing as a pharmacist for five years. Then she realized she didn’t want to be cloistered behind a counter. She wanted to care for underserved patients directly, so she convinced the sisters she should be the first nun in their order to become a doctor. She went to medical school at U of A, graduated in 1984 and did a residency in family medicine. Then she practiced in rural areas around Benson. (“That was fun,” O’Sullivan says.) She worked at Arizona State Hospital, a mental health facility where, according to an auditor general’s report, conditions had deteriorated to sub-minimum standards and staff turnover was as high as 47 percent. (“That was great,” she says.) Next, she served a poor population in an El Mirage clinic. (“I loved the practice, I loved the people I worked with, I loved the patients.”)

Given O’Sullivan’s ability to see the positive in challenging situations, it’s not surprising that, in 1996, a county official asked her to meet another need: caring for the homeless. “I felt it was the right thing to do,” she says. “I think it’s fair to say I had no idea what I was going [into]. I found out how steep my learning curve was going to be.”

She found herself practicing what she calls Third World medicine in a First World country. It’s a world where people get sick from dirty water and dumpster food, miss doctor appointments because they can’t afford transport, and have to dial 911 from a payphone. She told patients, “Elevate your legs.” They told her they didn’t have furniture, and when they put their legs up at the library, they got kicked out. She told them, “Take this pill with food.” They told her they didn’t know if they’d eat tonight. She told them, “Keep your wound clean.” They asked, “Where, in the filthy public bathroom?”

“I was horrified,” O’Sullivan says, “watching these people standing in line for a meal, heaving for air, pulling their oxygen tank, thinking, ‘I have this horrible secret. I know this, and I’m sure if other people knew this, they would never let this happen.’ … I’ve proved to myself that that is true.”

She started telling the stories, receiving cash donations, and putting them in a shoebox. When she needed to pay for patients’ prescriptions, eyeglasses or rent, she reached into the shoebox and found it perpetually replenished. She calls it a loaves and fishes story. Eventually, it grew into Circle the City.

The non-religiously affiliated organization reaches individuals through its mobile clinic and when hospitals discharge patients to its medical respite center. It provides nursing and physician care, hospice care, physical therapy, pet therapy, music from Phoenix Symphony, housing and job help, and household items. O’Sullivan says CTC alleviates three facets of homelessness: shelter and food, the feeling of family, and a sense of belonging to a community.

In a hallway, a bulletin board displays photos of everyone celebrating birthdays that month. A group of retired flight attendants volunteers to throw a party for each of them. Once a month, staff from Beauty by Veronica – a salon owned by Sheriff Paul Penzone’s wife, Veronica – style residents’ hair. The sheriff sweeps up hair, O’Sullivan says. Various organizations donate food, which is prepared by a chef who turned down a job at The Phoenician because he believes in CTC’s mission.

O’Sullivan’s own mission mirrors that of the Sisters of St. Joseph of Carondelet: She is a nun whose love of God leads her “to serve the dear neighbor without distinction.” “And the way I do that,” she says, “is gettin’ in that exam room and gettin’ down on the floor and gettin’ those feet cleaned up.”

O’Sullivan says the experience of homelessness is probably the lowest point in anyone’s journey through life. So she’s willing to get on the floor and go into the streets and embrace people in their darkest moments because, she says, “I’m walking with them, and that’s where they are. It’s a drive to accompany the people. And if that’s what it takes, then that’s where I need to go.”

HOME(LESS) STATS
O’Sullivan uses the term “people experiencing homelessness” rather than “homeless people” because homelessness is generally temporary and not an identity.

People living in shelters are more than twice as likely to have a disability than the general population.

7 in 10 adults living in permanent supportive housing nationally have a mental health condition, substance abuse issue or both.