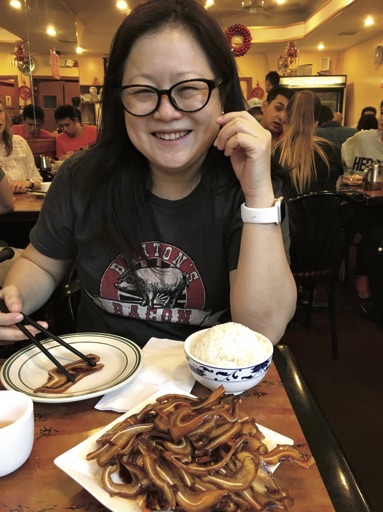 THE SEAFOOD
“There was seafood everywhere, that’s what I really liked about Boston,” Wichayanuparp says. One must-visit on her list was Mooncusser Fish House (mooncusserfishhouse.com), headed up by fellow James Beard fellow Chef Carolyn Johnson, where she dined on seared gnocchi with uni and mushrooms. Another score: the “tiny” Haley.Henry (haleyhenry.com), which is “basically just counter eating with a couple tabletops” featuring imported varieties of tinned fish.

THE CHINESE FOOD
“The thing that surprised me most about Boston was how good the Chinese food was. There were some late-night places, some good Northern Chinese [cuisine],” says Wichayanuparp, who once worked in finance in Hong Kong, Singapore and Bangkok. She recommends the grilled lamb skewer and hand-pulled noodles at Gene’s Chinese Flatbread Café (genescafe.com) and late-night dumplings at Gourmet Dumpling House (gourmetdumplinghouse.com), open until 1 a.m.

THE ICE CREAM
Of course an East Coast/West Coast ice cream showdown had to happen on Wichayanuparp’s watch. Not really, though she did like the artisanal flavors like honey-lavender at Honeycomb Creamery (honeycombcreamery.com) and loved the B3 (brown sugar, brown butter, brownies) at Toscanini’s (tosci.com) in Cambridge. “It’s not avant-garde in terms of flavor, but really, really well-executed.”