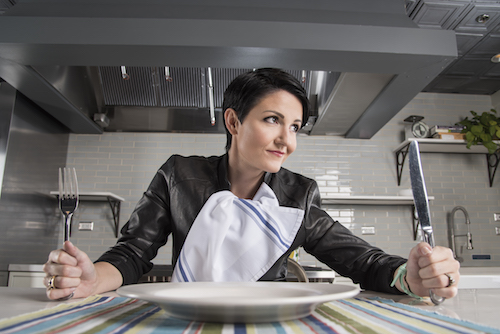 This show sounds like Chopped crossed with Supermarket Sweep.
One hundred percent. That’s exactly how I’d describe it.

I take it you’re sworn to secrecy about the outcome of your episode?
Correct. I signed a non-disclosure agreement.

Well, what can you tell us about the show?
It takes place in a grocery store, but it’s not technically a functioning grocery store. But it’s got a fully stocked produce department, and the best of the best products on the shelves. This is in Santa Rosa, California. They do partner with a lot of local food banks and charities. It’s pristine produce. I can tell you that this particular episode involved cheese. Cheese jokes, and a lot of cheese comedy. A lot of cheesy behavior.

OK, then, what’s your favorite cheese, whether it’s connected to the show or not?
Choosing a favorite cheese is too hard, but I was just liking some havarti about 10 minutes before you called. Super melty, buttery. I don’t think havarti gets enough credit.

So they really only give you 30 minutes to shop and to cook? What was that like?
Daunting. Guy says you’re going to make blah blah blah, and you have a split second to decide what you’re going to do… And usually Guy, being the kooky, wacky guy he is, throws in some kind of a twist… The rest of [the contestants] were all restaurant chefs. On the show, they called me a “Recipe Development Chef.” I’ve worked for Hickman’s, Shamrock Farms and Lodge Cast-Iron. So in terms of speed and timing and thinking on your feet, it’s not necessarily my thing. But it turns out once you’re in the situation, it’s totally do-able, and a half-hour is a lot longer than it seems.

But what we really want to know, of course, is… what’s Guy Fieri like? Insufferable?
He’s not insufferable at all! He’s very much what you see on TV, but he’s not quite as over-the-top. But he’s very upbeat, high energy. I’ve done a lot of cooking on local TV, morning shows and stuff, but always live. This was shot over a three-day period, and it was interesting to me to see somebody who could just step into that personality whenever the cameras rolled.