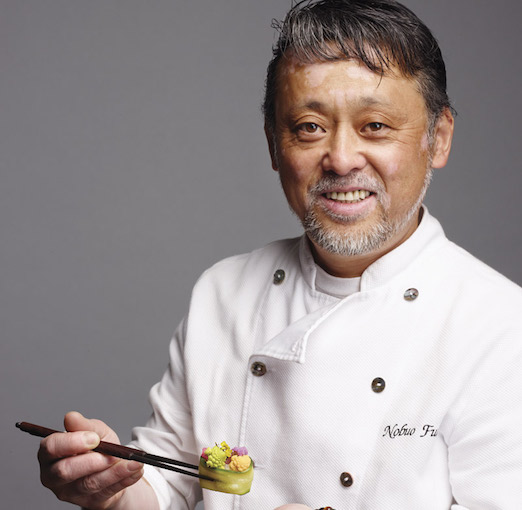 Here’s beloved local chef and James Beard award winner Nobuo (of Nobuo at Teeter House) slicing fish, grating katsuobushi, strewing herbs, sprinkling seeds, spooning dainty drops of sauce and carefully composing dish after gorgeous dish (many of them familiar to those of us who are longtime Fukuda fans) as Gooi films it all at such close range and in such splendid light that those of us in the audience stop just shy of openly drooling.

Gooi calls his piece a documentary, but the term sounds a bit dry and educational for what is really an intimate portrait of Nobuo, the man, and Nobuo, the chef – a passionate but thoughtful iconoclast who makes a habit of honoring and breaking Japanese culinary traditions in the same breath. In the film, we are treated to stories and pictures of Nobuo as a child, a teen and a young man. We learn about his parents and his childhood in Japan, his early years on the ski patrol here in Arizona, his marriage to his wife Sarah, his kids and his early work as a sushi chef — really, everything that has led to his current role as a “kakehashi,” the Japanese word for “bridge,” and the word that best describes what Nobuo has so adroitly accomplished in his life as a chef: bringing two food cultures together seamlessly and deliciously.

Gooi has submitted the piece to Netflix and iTunes, so if you’re lucky, you’ll be able to see it on one or both of those venues in the months to come. Stay tuned.