“I wish more people in Phoenix knew about us,” Ib Andersen says with a wry smile.

A lot of people outside Phoenix know about Ballet Arizona, the company Andersen directs. Critics fly in from New York to see it in action. Dancers from around the world audition to be in its ranks. Yet Ballet Arizona may be the city’s – and the state’s – best-kept performing arts secret.

For example, in April, Andersen unveiled a new staging of George Balanchine’s Western Symphony, a vibrant concatenation of cowboys, dance hall girls and pirouettes. As the curtain rang down, the audience leapt to its feet in an electrically charged, spontaneous standing ovation. It was almost enough to keep you from noticing the empty seats in Symphony Hall. Not that they constituted the majority of seats – an optimist would say the hall was three-quarters full, not one-quarter empty. But considering the splendor of the production, the stature of the company, and the size of the city, they were too numerous.

Still, it’s a major improvement over the recent past. In 2000, the outlook for classical dance in Phoenix was bleak, as Ballet Arizona foundered in a sea of red ink. Forged from the merger of three small, struggling troupes in 1986, the state’s only professional dance company was, it seemed, finished.

Enter Ib Andersen. The fabled former principal dancer of New York City Ballet was living quietly in Phoenix in semi-retirement, pursuing his second artistic passion: painting and sculpture. He’d moved here, he said, because the purity of the light inspired his visual artistic creations. One afternoon at the height of Ballet Arizona’s crisis, Andersen walked into the company’s cramped, mid-town Phoenix studio. The room was filled with dancers, and also with the rumor that Andersen was pondering an offer made by Ballet Arizona’s board: Take over the company, remake it according to your own artistic vision, and we’ll find the money.

When Andersen stepped into that studio, the dancers burst into applause. He accepted the offer, and the applause hasn’t stopped.

Ballet Arizona now boasts a global reputation. Last fall, New York Times dance critic Alastair Macauley dropped in on its production of Cinderella and deemed it “more touching, funny and musical” than versions produced by companies in New York and San Francisco, adding that Ballet Arizona’s Nutcracker – that annual cash cow for all ballet troupes – was “one of the three best” in the country.

As Artistic Director, Andersen hires dancers, oversees their training and rehearsal, chooses repertoire and supervises scenic and musical elements. (Most Ballet Arizona performances include live music by the Phoenix Symphony.) He also creates original ballets. His artistic direction and the arts philanthropists who threw themselves behind him not only saved Ballet Arizona, but also turned Phoenix into one of the country’s best-respected centers for classical dance. In its magnificent new, 45,000-square-foot facility on 28th and Washington streets (purchased and renovated at a cost of $13 million), Ballet Arizona prepares a 2014-15 season that will include the United States premiere of legendary classical ballet Napoli in its full-length version; an evening of contemporary choreography; an annual program devoted entirely to the ballets of George Balanchine; and of course, that top-rated staging of Nutcracker.

Ballet Arizona produces two kinds of programs, reflecting Andersen’s background. One sort is the full-length story ballet like Swan Lake. The other is a collection of shorter, usually abstract ballets, often set to contemporary music. The first reflects Andersen’s beginnings as a principal dancer for Royal Danish Ballet in his native Copenhagen, Denmark; the second, his star turn in New York.

“I’m a hybrid, really. At Royal Danish Ballet, we danced Bournonville, the great 19th century classics,” Andersen explains, citing the work of Denmark’s greatest ballet master, August Bournonville. “My success with story ballets comes from that experience. For the more contemporary ballets, I have the Balanchine background.”

George Balanchine, founder and artistic director of New York City Ballet and the 20th century’s most famous choreographer, saw Andersen dance with Royal Danish Ballet and invited him on the spot to join the ranks of City Ballet’s principal dancers. Andersen accepted, and within three months of his arrival in New York in 1980, he’d mastered the unique Balanchine style, learning 35 new ballets.

Says Andersen of the gulf separating the two styles of dancing: “With the Bournonville style, you were much more like a singer, more phrased, where Balanchine was more to the beat, less subtle in a way.”

Both styles find their way to the stage when Ballet Arizona performs. “My choreography at Ballet Arizona has been due to our limited budget. I’d like to hire major choreographers to create ballets for us, but we can’t afford them,” Andersen says. The dozen or so ballets Andersen has created range from a full-length meditation on the variety of human movement (Mosaik, 2004) to a celebration of musical athleticism (Diversions, 2010) to a comparison of natural and artificial beauty in Topia, created in 2012 for outdoor performance at Phoenix’s Desert Botanical Garden.

Andersen thinks of his choreography as influenced not only by decades of dancing, but by the visual arts he so loves: “I think many times when I choreograph that I am ‘drawing’ with the dancers, using them like elements on a canvas.” 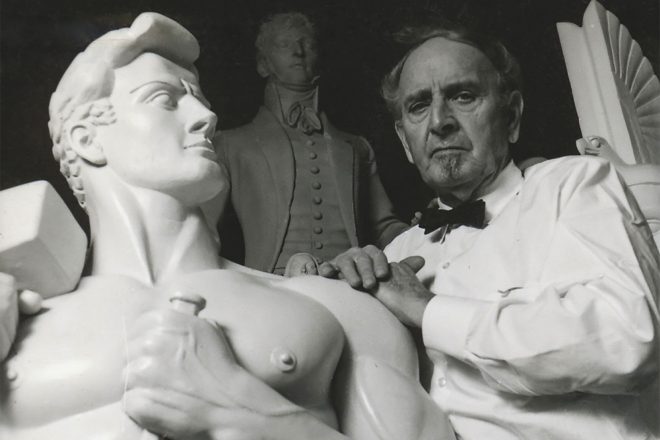