Distrito, we hardly knew ye. Just a year after opening, Iron Chef Jose Garces’ spunky little Mexican street food concept in Scottsdale’s Saguaro Hotel has already undergone major changes. With the menu altered to reflect a more serious, contemporary Mexican culinary philosophy, it looks like the powers that be decided to get serious with the ambiance as well. Gone is the over-the-top, neon-hued, spilled-piñata decor that brought to mind Frida Kahlo’s favorite coffee shop. Granted, it was a bit polarizing, but I liked the cheeky exuberance that sparked the rather cave-like space and made a clear statement about the fun, snacky concept. Now, the large room with adjoining bar and lounge is bland, featureless and dark. The only festive note comes from bright orange chairs on the narrow strip of patio overlooking Civic Center Mall. Fortunately, the menu is more exciting than the decor, with categories for shared appetizers, snacks, tacos, small plates, large plates, a tasting menu, a taco bar and desserts. There isn’t a combination plate in the house. You won’t find complimentary chips and salsa either, but thankfully the stellar signature guacamole ($10) remains unchanged. Satiny avocados are coarsely mashed with just a whisper of lime, garlic and jalapeño, then dusted with cotija cheese and served with warm, salty chips. It’s a simple but totally satisfying starter.

From the snacks category, meaty, deep-fried crab claws ($12) with a smooth and spunky green chile aioli are firmly in the bet-you-can’t-eat-just-one category. Like an exotic sloppy joe, the two-bite sized gorditas ($6) burst with juicy ground beef and just a hint of sweetness. Soft tacos are built on exceptional house-made corn tortillas that are slightly granular and delicate, yet sturdy enough to support the main ingredients. The chicken ($8), cooked down to ropy shreds, is tender and emphatically seasoned, garnished with a bit of mild cheese and crunchy radish for texture. Earthy carnitas ($8) and refries are enlivened with a dab of pineapple salsa. Shredded red cabbage and smoky chipotle remoulade tops the grilled fish tacos (the variety of fish changes daily, $11). Corn soup ($13) is considered a small plate, but it has some big flavors and a striking presentation. The sweet, chowder-like soup is garnished with a tender, musky-scented, huitlacoche-filled dumpling. A dab of crema adds richness, and a sprinkle of caviar contributes salty brine. A rainbow of taste sensations also characterizes two ceviche plates. Tuna ($15) is matched with a spicy coconut sauce, and a surprising mini scoop of tart lime sorbet offers tang and chill – nice. An equally sophisticated balance of habanero heat and fruity orange and pineapple punctuates the firm, mild amberjack ($16). Grilled octopus ($13) is almost caramelized, bringing out a real depth of flavor augmented by the one-two punch of jalapeño sauce and caper-laced bearnaise. The only misstep in the category – and it’s a serious one given it’s the most expensive item on the menu – is a miniscule sliver of raw and flabby foie gras ($23) tucked into an overwhelming, heavy and sweet mini muffin.

In truth, the large plates aren’t a whole lot more generous than the small ones, but there are some choice items available, like a seriously crusty-skinned, habanero- and orange-glazed mesquite-smoked chicken ($20) accompanied by the novel side of popcorn grits. (Supposedly made from popcorn kernels, these grits didn’t seem significantly different from the regular stone-ground version.) An infusion of pineapple lightens rich pork belly  ($20) served with complexly seasoned beans. Meltingly tender short ribs ($20), called birria (though that usually refers to goat), comes in a lovely sauce reminiscent of mole that was inexplicably doused with vinegar, badly throwing off the flavor balance. At lunch, nachos ($6) are piled in a little casserole dish, so densely integrated with creamy refried black beans, cheese and veggies that picking up one chip basically means picking up the entire dish. Presented like this, they’re more like chilaquiles than nachos. The chile relleno ($16), available at lunch and dinner, is packed with kale, quinoa and black beans and is as healthful as it is delicious. And who’d have guessed how well a medium rare burger patty ($11) would pair with a shmear of refries? It doesn’t hurt that the accompanying yeasty-flavored bolillo roll has a great, stretchy texture.

There are just three desserts, but they are so good I can imagine popping into Distrito just for late evening coffee and sweets. Sugar-spangled, crispy churros ($7) speak to the love of fried dough that lives in all of us. For dipping, chocolate-chile sauce and caramel-like vanilla sauce are spot-on. The tres leches cake ($7) is just as alluringly moist as it should be, and plenty of fresh pineapple makes it reminiscent of an especially luxurious upside-down cake. The undisputed star, though, is the extravaganza for two called the El Fuerte ($12), combining flourless chocolate cake, coffee ice cream, cinnamon-spiced peanuts, and chocolate and caramel sauces. It is a mouth party. The youthful staff scurries about busily but could use more training. Over the course of three meals, never once did the runners deliver the dishes to the correct diner, involving much awkward shuffling and switching. Another issue is the speed at which the food rockets to the table – when dinner for two costs a hundred smackers, I want more than 45 minutes of table time.

When PHOENIX magazine originally reviewed Distrito, the review observed that it took wicked confidence to open a Philadelphia-based Mexican restaurant in a town that considers Arizona-Sonoran-style food mother’s milk. The new Distrito is something entirely different, and the adventurous would do well to give it a try. 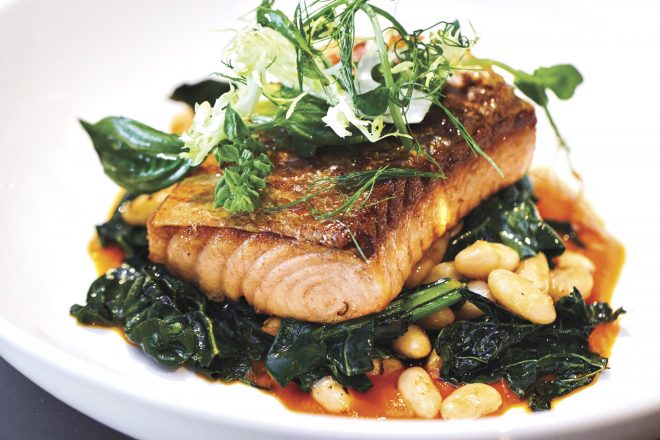