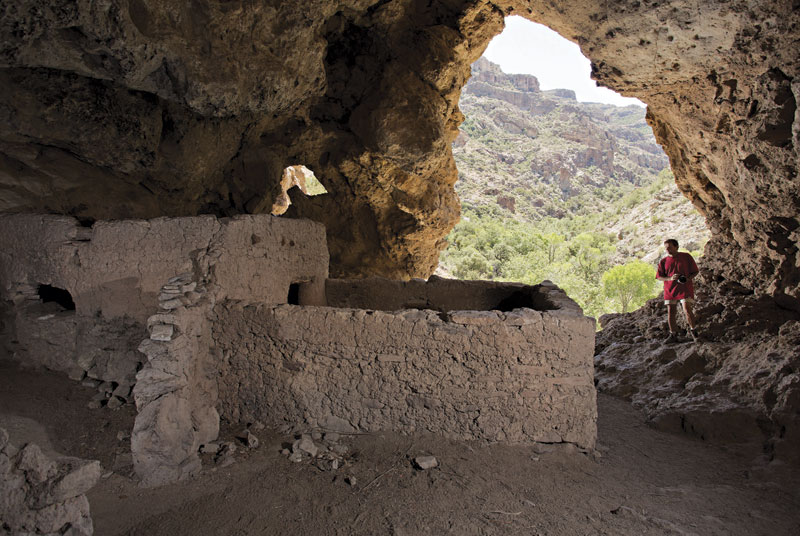 Centuries-old Indian cliff dwellings offer a secret link to the Valley’s pre-Columbian past. And they’re only a four-mile backcountry hike away.

The eastward sprawl of modern Phoenix ends at the foot of the hot, red Superstitions, where our streets and sidewalks dare not climb. Ancient suburbanites were not so easily deterred. Fleeing the bustle of their society’s business district, now mostly submerged below the waters of

Roosevelt Lake, the Salado Indians who scrambled up Roger’s Canyon to build a two-story complex in these remote crags 600 years ago must have been very determined.

Even today, with a pocked dirt road off the U.S. 60 underfoot most of the way, it isn’t easy to get to this village, which has forgotten any name it ever had. After four miles of weaving around boulders and through a maze of overgrown manzanita, ruins guru Dave Wilson’s shirt is soaked in sweat, his exposed calves covered with thin red streaks.

The village’s secluded locale and picture-window views must have been selling-points for the ancients who lived here, hauling mud, rocks and reeds from the stream bed below to construct a 65-room fortress sheltered by khaki cliffs. As Wilson pokes his head into one of the three rooms that still stands, his imagination is momentarily captivated by the Salado, who lived here between 1150 and 1400. “You go into a small room and you can see people sleeping. You can see people in there chatting,” says Wilson, author of Ruins Seldom Seen, a guide to unmarked, remote Indian villages. “I see people in the corner working, grinding corn.”

Other than a brief stint as an outlaw hideout, this Hobbit-sized building was last occupied more than half a millennium ago. Though vandals have carved into the wooden beams, and the walls of the outer rooms have collapsed into the canyon below, it’s eerie how much it feels like someone’s abandoned home. The first archeologist who dug here in the 1920s found leftover corn, beans and squash, and sandals made of yucca fiber.

There are hundreds of sites like this strewn across the Southwest, dozens within a short drive of Phoenix. Even centuries of dry climes haven’t rotted away these grand complexes. Digs have uncovered animal bones from ancient meals, dice from primitive games, and the butts of  cornstalk cigarettes. Wilson says hikers who’ve logged a lot of backcountry miles probably walked right by such sites without knowing it.

Indeed, the other hikers we pass along this trail don’t mention the village. That may be because the dwellings are hard to spot from as little as 100 yards away. Even Wilson gets turned around at one point before finding the right place to slip off the trail and up a steep, scree-covered pitch. “I used to think that things like ruins and petroglyph sites are rare because I never saw them. But as your eye becomes trained, you’re able see this stuff is everywhere,” he says. “You realize Native Americans left things everywhere because they were everywhere.”

By “everywhere,” Wilson means the 1,400-year-old canals plowed under by early farmers tilling land where downtown Mesa now sits, the Hohokom petroglyphs dotted into the boulders of South Mountain during the tribe’s 1,000-year reign of the Valley, and the 125-room complex still standing on an Apache reservation in the Sierra Anchas east of Globe, which visitors aren’t allowed to see. There are 700 architectural ruins in the city of Phoenix alone, according to a city archeologist. “If you were to take a map of Arizona and put a thumb-tack everywhere at every archeological site, you wouldn’t have a map anymore,” Wilson says. “It’d be shredded.”

Late University of Arizona anthropology professor Henry Dobyns estimated there were 100 million native people in the Americas before the Europeans arrived. The Valley’s ancient population may have hit 50,000 at one point – larger than Paris in the year 1,000 A.D. Those figures are hotly debated, but all anthropologists agree that just before Columbus paddled ashore in the West Indies, mysterious calamities hit the Southwest. Sophisticated desert-dwelling people in Arizona and neighboring states abandoned their urban cores almost simultaneously, less than a century before the Spanish arrived.

“They didn’t just vanish, but they sort of dispersed into smaller groups and reverted back to a more primitive lifestyle,” Wilson says. “If you live in Phoenix, you see the descendants of the Hohokom walking among us.”

Most Phoenicians know their city took its name because it was built on the ruins of a great civilization, one that’s mostly been turned back to dust by time, rain and bulldozers. But some sites, like the 800-year-old Elephant Mountain fort left by an offshoot of the Hohokam, are tucked just a few miles from swimming pools and shopping plazas in Cave Creek.

Finding them can be difficult. Recent archeological reports are intentionally vague, leaving out basic directions, let alone GPS coordinates. Instead, archeologists pass information inside their cabal to protect sites from vandals, thieves and inquisitive hikers.

Older reports are not so secretive. To find ruins, Wilson mainly uses documents buried in the basements of college libraries. Much of his research involved poring over those old papers, many of which contained crude maps and photos from the 1930s. “Finding these places is detective work,” he says. “You have to go to the library and find not just one report, but two or three reports. Even though they’re all vague, they all have clues, and from that you can triangulate.”

Wilson had qualms about giving away 36 locations in his 1999 book, fearing that packaging the information so neatly would do more harm than good. He was nervous when he drove from his home in Central Phoenix to revisit every site for a second edition published last year, and relieved to find almost everything the same, even at the half dozen sites along the edges of Maricopa County.

No one knows why this village’s population evaporated, but there is speculation the irrigation system they constructed atop the mesa over these cliffs failed. Great desert civilizations can blossom when the rivers flow. Maintaining them in drier times, it seems, is another matter.

“People think the Indians lived in harmony with the land, and that wasn’t always true. There’s a lot of evidence of environmental degradation in these villages,” Wilson says. “To me, that doesn’t make the Indians look bad; it makes them look just like us.”