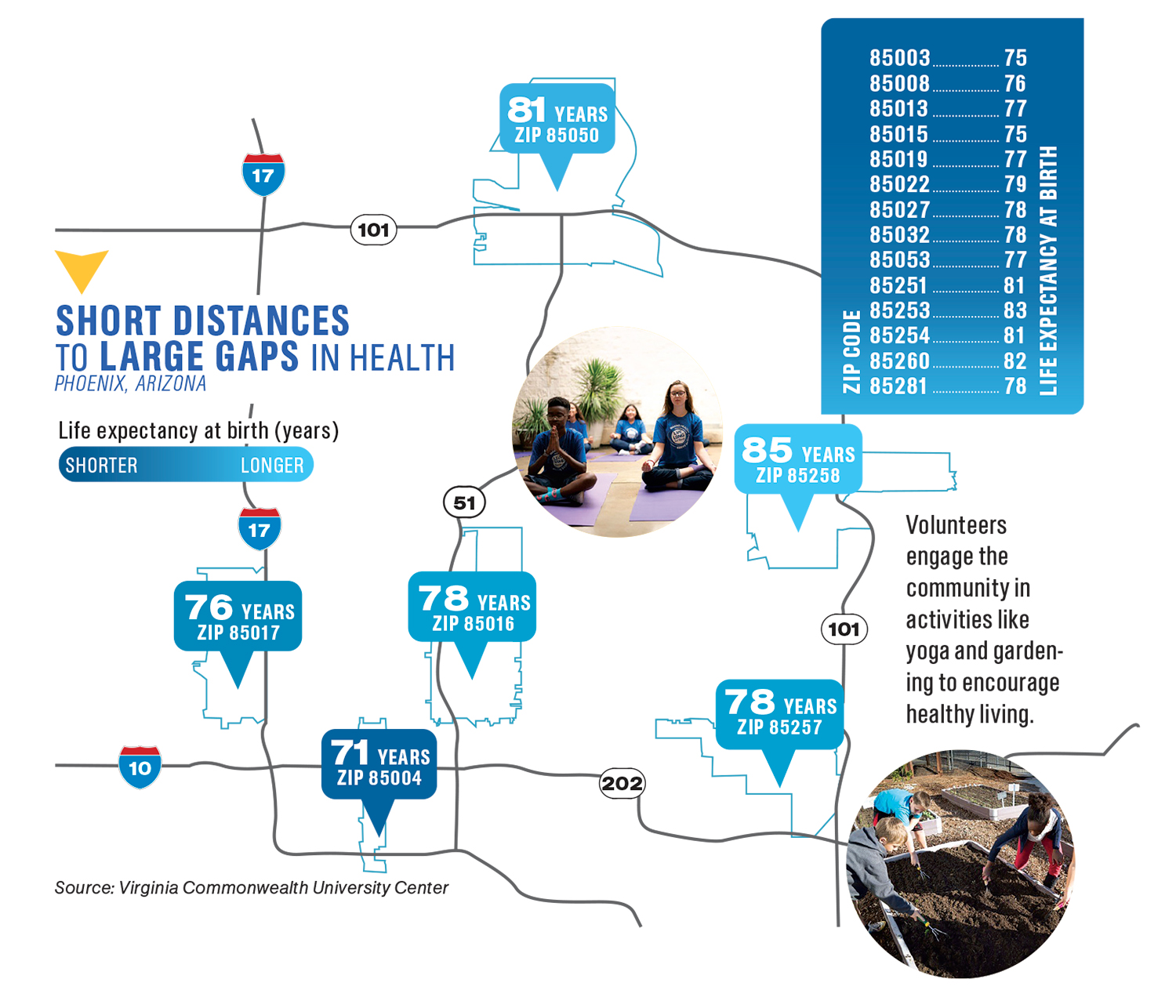 In a twist on the “blue zone” principle, where you live in the Valley may help determine your lifespan. A new initiative aims to level the playing field.

A child born and raised around McCormick Ranch in Scottsdale will live about 14 years longer than a child raised in the shadow of Chase Field in Phoenix, according to a study by the Virginia Commonwealth University and the Robert Wood Johnson Foundation.

That’s one of the stark findings of Blue Zones Activate South Phoenix, a long-term initiative modeled on the research of National Geographic fellow Dan Buettner, who identified the five places in the world – dubbed “blue zones” after the blue marker used to circle them on the map – where people live unusually long relative to their regional neighbors. (Only one, Loma Linda, California, is in the U.S.) The project’s goal is to deliver the healthy lifestyle features of those communities to nine zip codes across South Phoenix, where access to such options has historically been limited.

“Where you live matters,” says Tomás León, president of Equality Health Foundation, which has partnered with UnitedHealthcare of Arizona and Valley of the Sun United Way to lead the project. “Your zip code is more of a determinant of your health and longevity than your genetic code.”

The Tucson-born administrator says COVID-19 statistics laid bare the disparities. Nationally, people residing in densely populated areas with low economic opportunity, less access to health care and poorer nutritional options – not coincidentally, also largely people of color – were at higher risk for transmission. “In health care, that conversation has been very robust,” León says. “That conversation is being broadened to include economic development, business development, housing development and education.”

The first stage was meeting with more than 500 community leaders and residents in South Phoenix. “Their initial reaction was, ‘Hey, another assessment, another initiative. We’ll see how long you stay around,’” León says. “But that’s not what this is about. This is about coming alongside community leaders and residents, identifying and elevating all the great things that are going on, and then filling in the gaps and supporting community innovations and solutions to make improvements wherever we can.”

“People support what they create,” León says. “And this work moves at the speed of trust. If the people of a community have a seat at the table to share their ideas, that’s when meaningful things get done.”