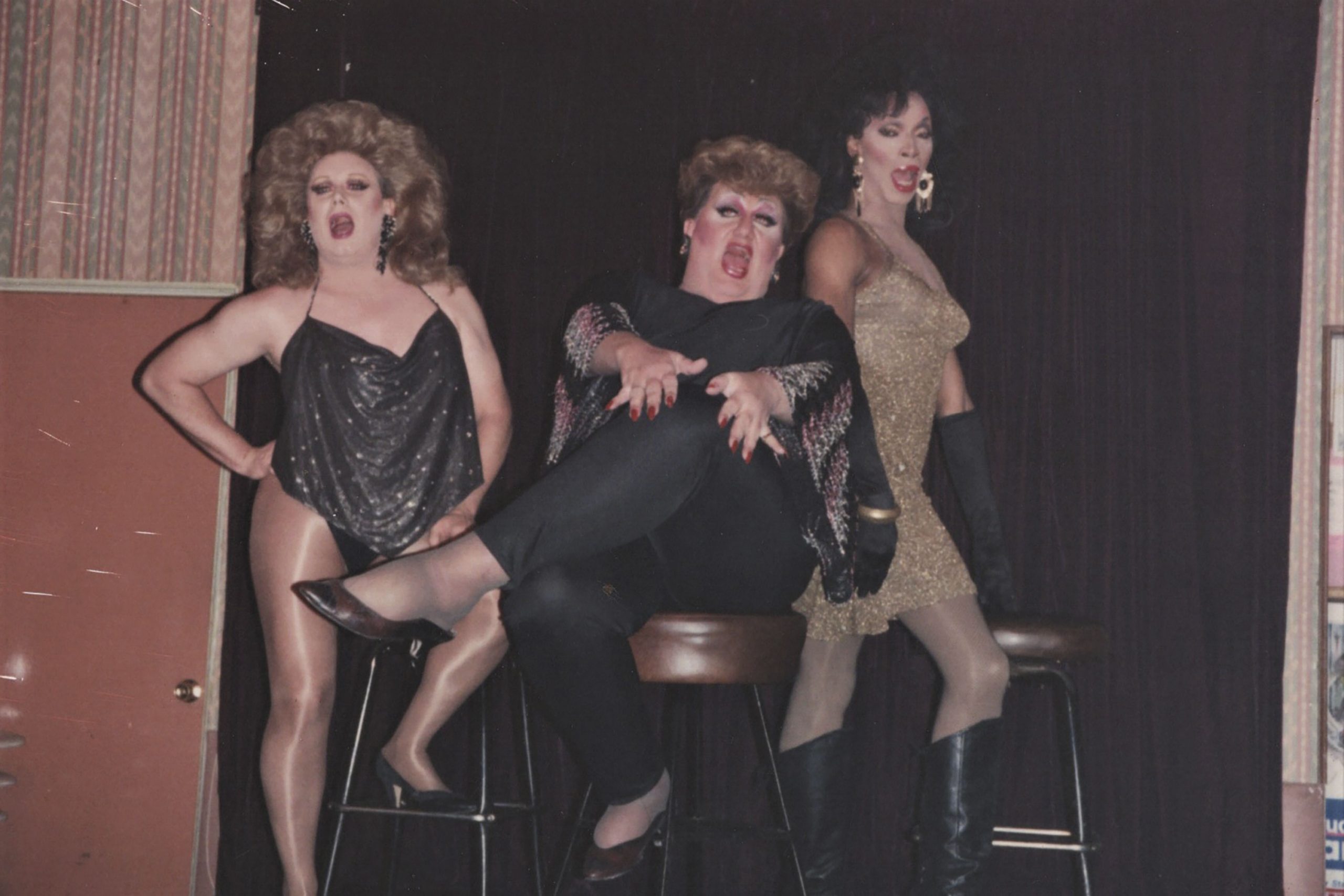 The resurgence of drag shows on Roosevelt Row recalls the heyday of Downtown gay bar 307 Lounge.

“I like to entrance people and take them to another dimension,” says Burandy J. Wine, who describes themself as an intergalactic goddess who crash-landed on Earth and is trying to blend in with society. “During my drag performance, you’re going to forget you are sitting at a table; when we lock eyes, there’s just you and me in this universe.” As a queer artist, Wine delivers a compelling performance once a month at Kähvi Coffee + Café’s Drag Disco Brunch.

Pairing drag queens with mimosas at Kähvi is apropos considering its location in the monOrchid building on Roosevelt Row is a stone’s throw from the site of a legendary gay bar. For decades, the 307 Lounge offered gender-fluid entertainment amidst famed boozy paintings created by an iconic Arizona artist, an experience compelling enough to attract straights, too. “The 307 was the sleazy bar everybody whispered about, but all ended up at,” says Daniel Dold, aka drag queen Lady Casondra. The eclectic dive didn’t survive RoRo’s recent hipster-driven gentrification, but a historical plaque funded by the property developer for the LGBTQ+ community hints at its
racy legacy.

The 307, one of Phoenix’s first gay bars, started life as Larry’s Buffet at 307 E. Roosevelt St. It opened in 1939 and was renamed Roy’s Buffet the following year. In 1947, the nightspot was rebranded as Hubbard’s 307 Club. After a fire destroyed the building in 1951, the 307 Lounge reopened nearby at 222 E. Roosevelt St. Sources – including former patrons –  disagree on when exactly the bar “went gay,” but the consensus is the 307 was at least gay-friendly by the 1950s. 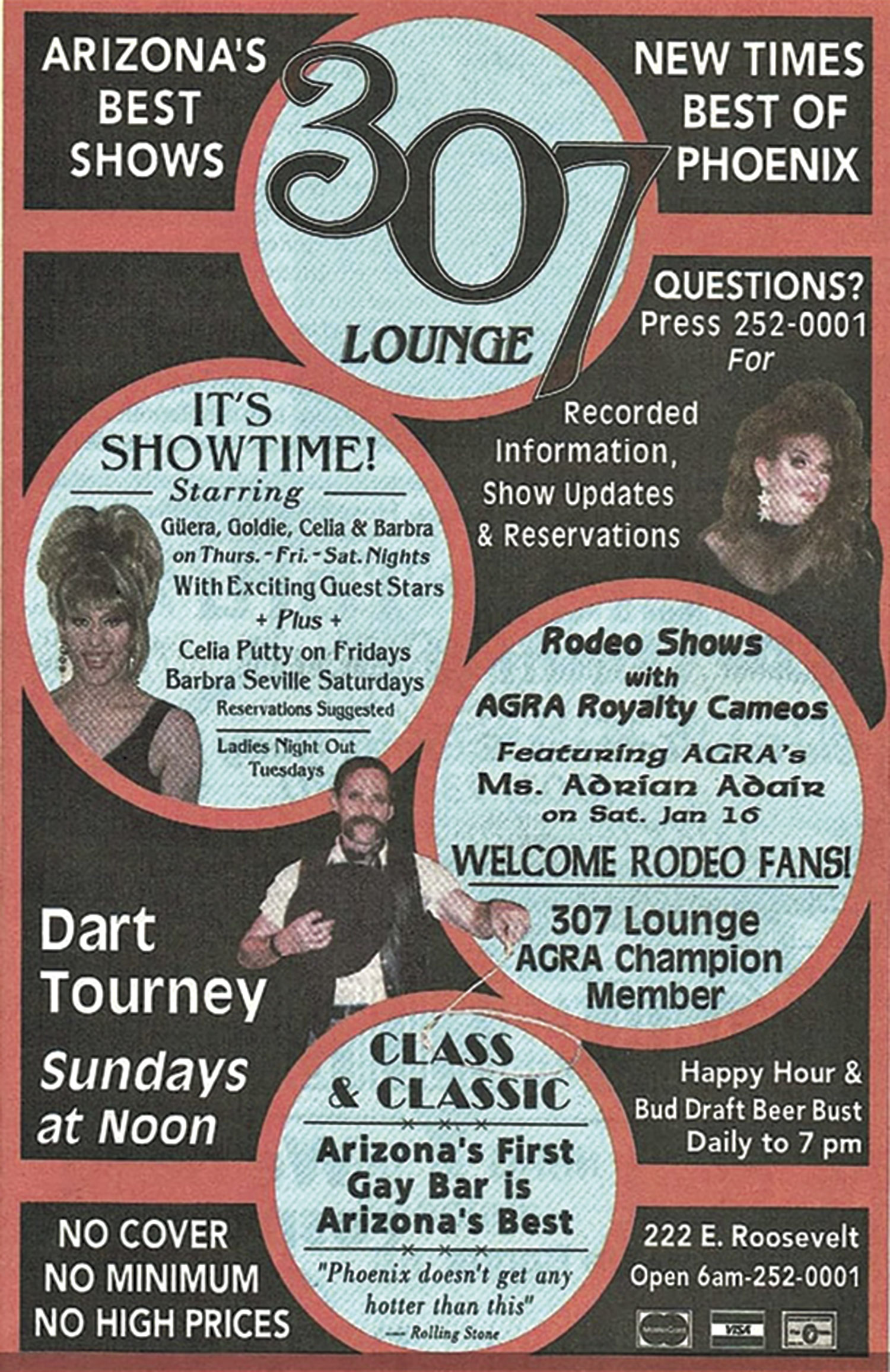 The new place was a cozy, nondescript beige structure. Those in the know eventually realized that the simple numbers “307” on the building were a three-digit, local LGTBQ+ party code. Gay bars historically had minimal advertising and used discreet off-street entrances to keep a low profile for closeted customers and decrease interactions with hostile individuals. “The 307 lacked windows so that rocks couldn’t come through, which happened at some other gay bars I worked at,” says Tony Bartoli, a former 307 bartender.

The 307’s interior was decorated with murals created by Ted DeGrazia, a painter famous for depicting angelic Native American children. “The largest [mural], stretching about 20 feet… depicts the effects of alcohol on the Yaqui Indian culture. Another serves as stage backdrop: a faceless dancing woman immersed in an oversize Champagne glass,” noted a 1995 article in The Arizona Republic.

DeGrazia became a huge commercial success, but not everyone at the 307 was enamored of his work. “The story goes he was a frequent customer and painted the murals as part of a trade for discounted drinks in 1954,” Bartoli says. “I thought [they were] quite ugly, but we couldn’t do anything about it since he became famous. Customers messed with the George Jones tune on the jukebox, changing the lyrics to, ‘If drinkin’ don’t kill me (the DeGrazia will).’”

The 307 mostly kept an uneasy peace with authorities. “We were told to keep an eye on it in the early 1960s due to questionable activities,” says Dudley Gibson, a retired Phoenix Police Department officer.

By the early 1980s, the 307 hosted drag performances, including the Golden Girls Revue of Lady Casondra, Tish Tanner and Felicia Fahr. The female impersonators got gussied up in the “Dressing Room” building and dashed across the alley to the 307’s side door. “Lady Casondra liked to pull tricks on us and locked me out one night when I was in a ridiculous outfit dressed like Rose Mofford,” says Petronella, who occasionally performed there. “Cars were honking at me as I pounded on the door.”

The 307’s craziest production was Monday Morning Madness, says Petronella, who joined in the debauchery once with 20 other female impersonators. “The drag show started at 6 a.m. and continued until the last performer passed out… between stage appearances, we did shots and all degrees of partying. The event didn’t last long, but it was quite a thing at the time.” 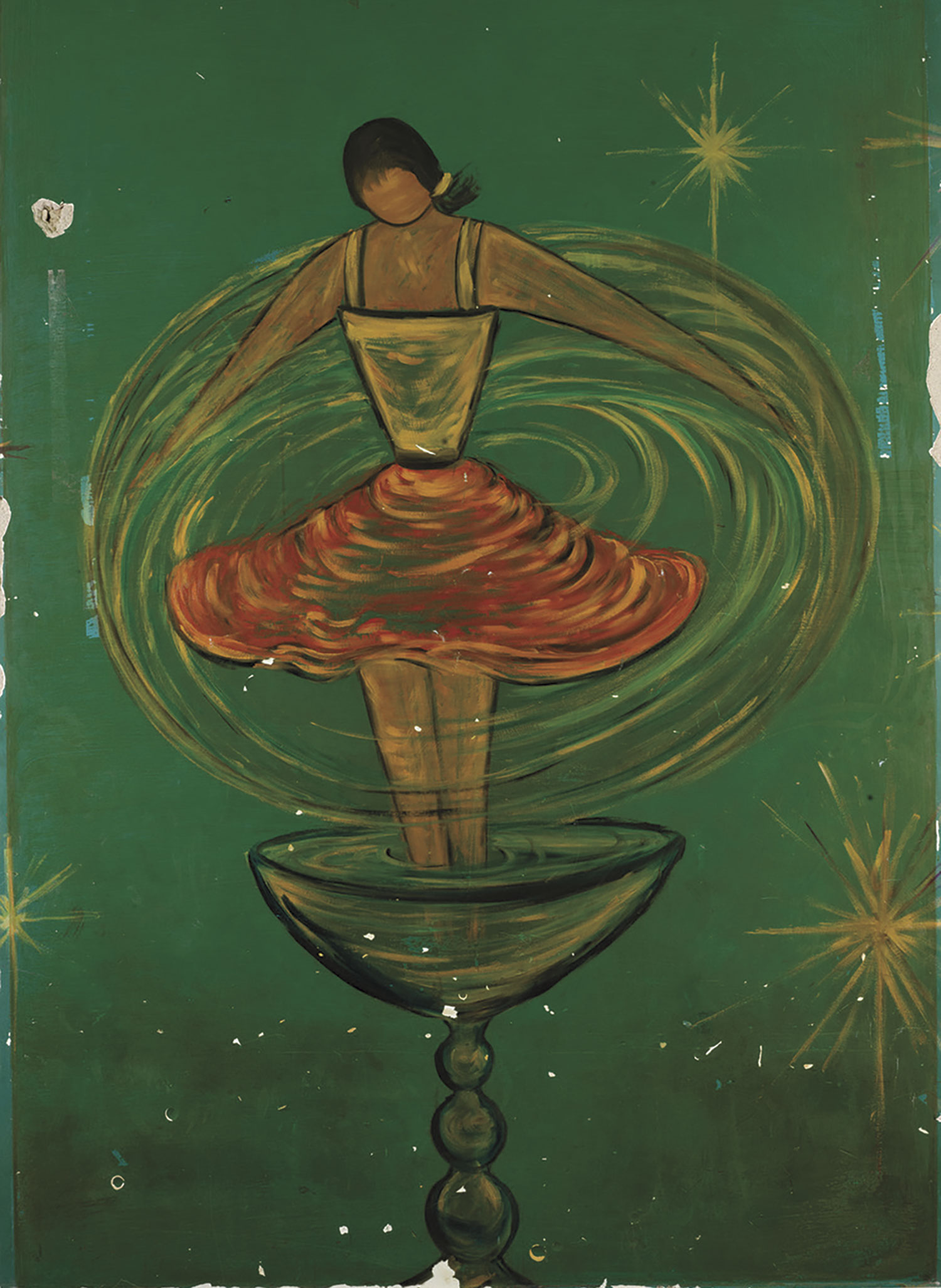 Petronella says the 307 attracted some rough clientele. The seedy block was called “the Fruit Loop” by the police or “the Meat Rack” by locals for its gay prostitution. This was initially lost on Danny Bonaduce, who found fame in the early 1970s as a child actor on The Partridge Family. Bonaduce was working as a radio personality for KKFR in Phoenix when he was arrested for beating a transvestite sex worker on the Loop after paying $20 for sex in 1991.

The 307’s fabled run ended in 2000, when the owners opted to relocate. But the business never reopened, and the property was eventually redeveloped in 2015 for iLuminate apartments. When the building was slated to be demolished, there was an unsuccessful effort to preserve the DeGrazia murals. “They disintegrated, crumbling to pieces,” Phoenix photographer Steve Weiss says. “I have one little part of a mural sitting on my nightstand.” 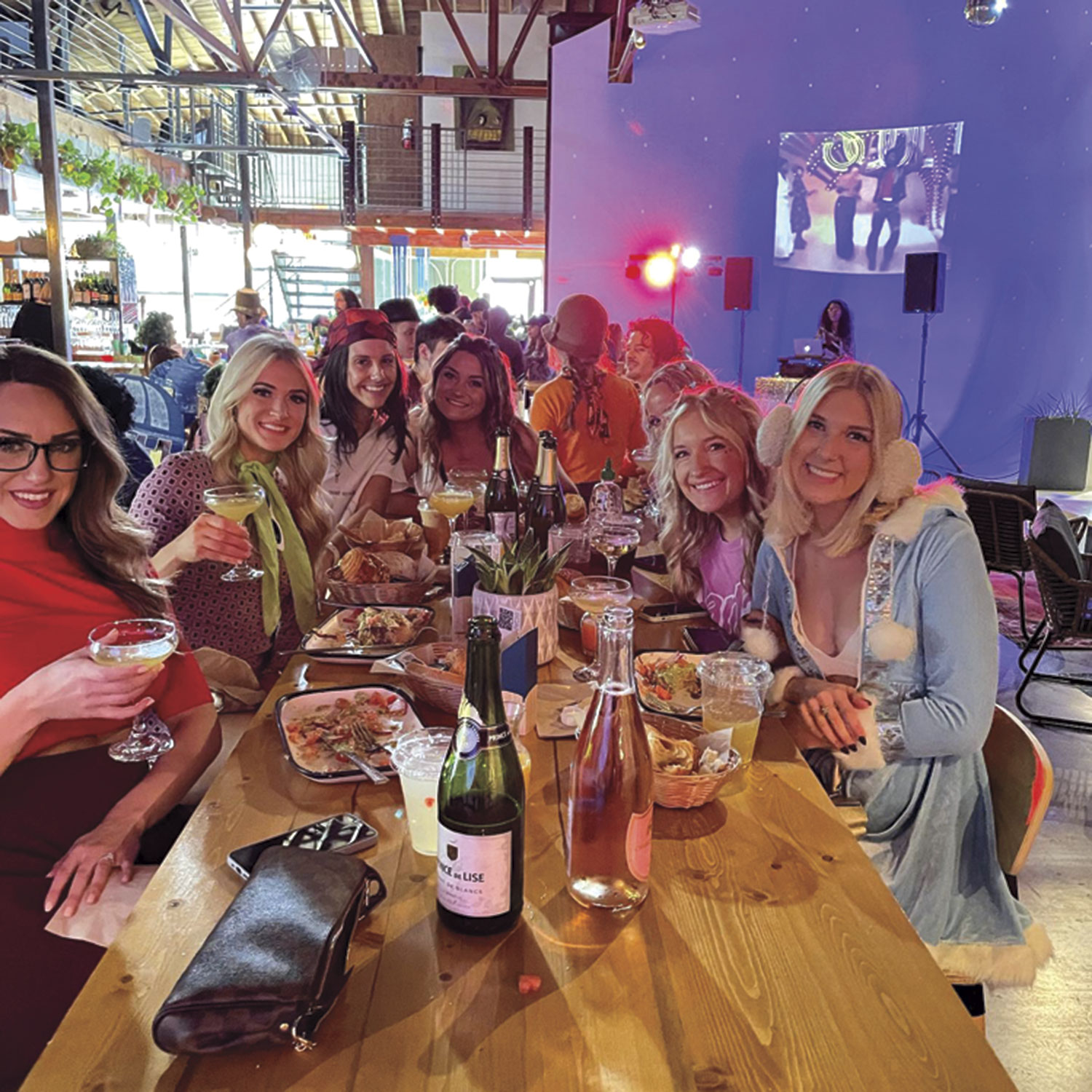 But RoRo returned to its roots in 2021 when Kähvi – two doors west of the late 307 – launched its Disco Brunch. “They [the owners] said ‘This would be a lot more fun if your Inferno Drag Show hosted it,’” Wine says. “It was an ‘aha’ moment, like a bright white light was shining down on us. We started jumping up and down and finished our Champagne. Their brunch was nice, but it was missing something, and we were the cherry on top.”

Kähvi operating partner Samia Kohler is in awe of Inferno’s performances. “They’re so fun to watch during brunch. We get a diverse crowd, people from all walks of life screaming and dancing; it’s unreal. I even stop doing service because you want to dance with them.” 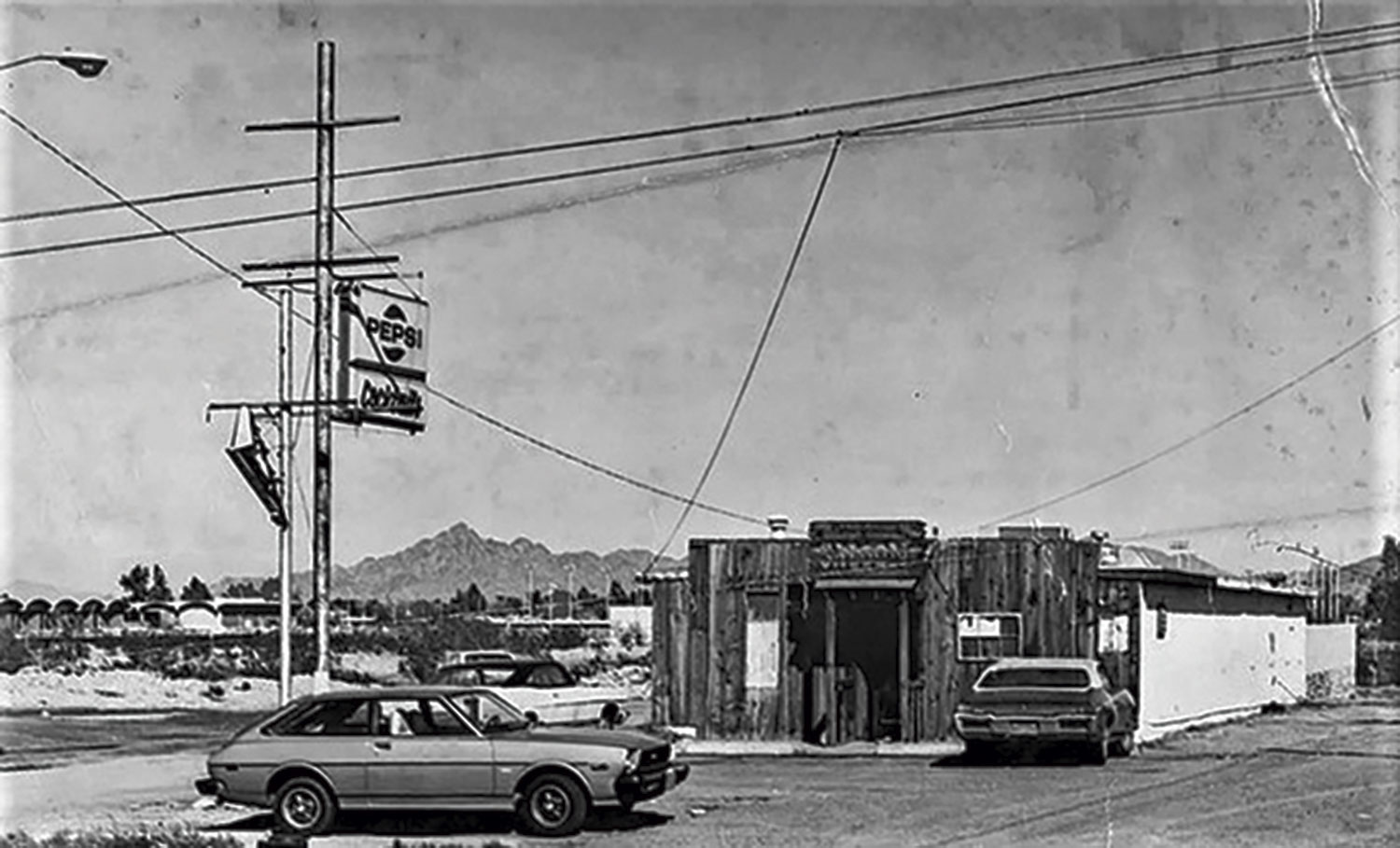 “When it first opened in 1971, it was a dive bar out in the boonies on East Van Buren Street near Papago Park,” says Chris Kuney Johnson, who later owned the business. “We were famous for funky furnishings and our Beer Bust Sundays, where the place would be filled with lines going around the building waiting to get in.” Nu Towne is currently Phoenix’s oldest gay bar.

In 1986, this now-defunct nightclub on Seventh Street just north of Indian School Road featured a performance by Divine, aka Harris Glenn Milstead, the John Waters muse who was called the Drag Queen of the Century by People magazine. “She was three hours late, and it was so hot in the venue,” says Mark Maskalenko, a Phoenix educator who was there. “Divine wore a skin-tight dress and had a filthy mouth. It was a disgusting but awesome performance.” Divine died in 1988.

The now-demolished 1970s nightclub had an incredible aroma thanks to its location next door to an Italian bakery on 16th Street north of Indian School Road. “My 300-pound drag rival there, Cissy Goldberg, was on stage and said something derogatory about me, so I went up and hurled my cocktail in her face,” Petronella says. “Cissy was shocked and picked me up. Then, milking it for the audience, she carried me outside and tossed me into the dumpster as the crowd cheered. [She said] ‘That’s showbiz, kid.’”