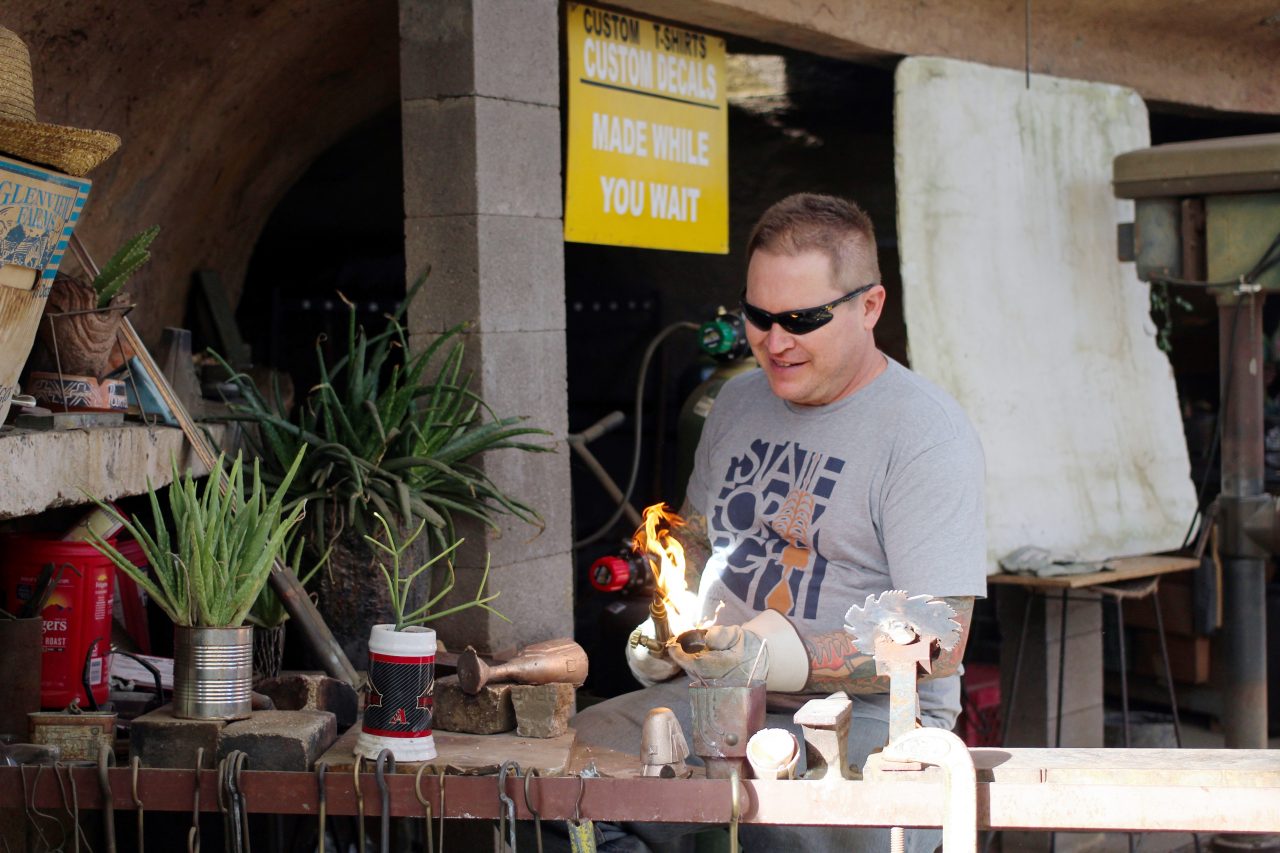 Dave Tabor crafts his Cosanti windbells to look like they sprang from the eponymous art studio’s earthy, experimental architecture. He imprints circles into the bronze to mirror the walls’ porthole windows and gouges out warped lines to echo the ceilings’ cement ridges. “I’m trying to get what people see here at Cosanti into a bell, so it looks like it was born here and should leave from here,” the artisan says.

Late architect Paolo Soleri built Cosanti in Paradise Valley in the 1950s and ’60s, before beginning construction of Arcosanti, his sustainable city north of Phoenix. Today, Soleri’s foundation is financially sustained by the sale of Cosanti Originals windbells, which seems at first blush like the most idiosyncratic business model ever conceived. But Tabor says the building and the bells are formed in almost the same way.

Tabor packs sand around a conical plate, presses circles and ridges into the sand, then pours bronze into the empty bell-shaped space. To make Cosanti’s elaborate concrete structures, Tabor explains, Soleri’s team “had a mound of dirt, and they carved into the dirt like I did with the bells. Then, as opposed to metal, they filled it in with cement. And they peeled away the dirt and were left with this beautiful cement piece.”

Because the metal is poured into empty space, the shapes are reversed when the bell is cast. That suits Tabor perfectly, because his dyslexic mind flips images. Previously a business card typesetter, Tabor tired of cubicle life and now enjoys working outdoors and bantering with his fellow bellmakers, as well as the physical nature of the craft: When he took the job 15 years ago, he lost 35 pounds in six weeks. The former slam poet is also attracted to the philosophy of bellmaking. “There’s a passage from the Tao Te Ching about making things from nothingness,” he says. “So since we’re casting into these voids with the metal, I get to work in negative space.”

Blowtorch
Tabor uses a blowtorch to melt metal rods onto cracks or other imperfections in the bells.

Wooden Box
To make a bell, Tabor shovels sand around a bell-shaped plate before pouring molten bronze into a hole in the sand.

Ax Handle
Tabor bashes the sand down with an ax handle, then flips the heavy wooden container over and packs more sand around the plate.

Assorted Materials
Plexiglass, plastic pipe and jerry-rigged metal circles are pressed into the sand to give the bells their characteristic ridges and rings.

Cosanti Bell
Cosanti bells are all handcrafted and known for their copper and verdigris colors and rustic textures.