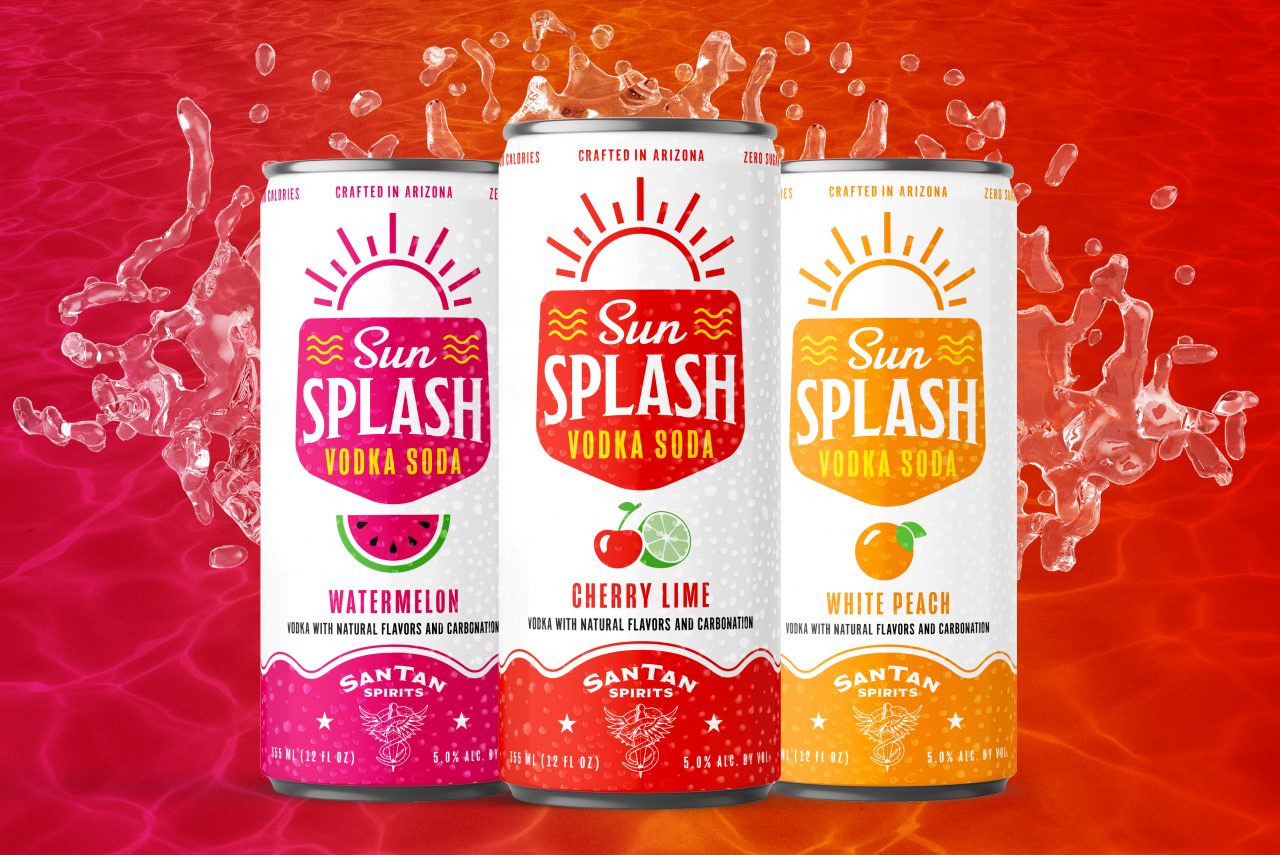 SanTan Spirits is making a splash in Arizona and beyond with a tasty trio of canned cocktails perfect for sipping in the sunshine. Aptly named SunSplash, these ready-to-drink vodka sodas came out in July and combine SanTan’s award-winning vodka with fun flavors – cherry lime, watermelon and white peach.

SanTan’s sales manager, Alejandro Fontes, says the SunSplash concept has been years in the making.

Fontes, who has been with the brewery and distillery for nearly a decade, knows a thing or two about working your way up. “I’ve watched SanTan grow from a small brewpub here in downtown Chandler into the craft beer and spirits producer we are today,” he says. “I grew up through the pub, worked as a busser, in the kitchen, serving, expo, catering… I have direct insight into product launches, and we work collaboratively at SanTan with all departments, with the pub, production and sales team to make sure that we’re all firing on the right cylinders.”

Developing the three flavors included a lot of “trial and failure,” Fontes admits. Several years ago, the team set out to make SunSplash a beer-based seltzer. However, they ultimately didn’t feel that it stood out enough in the saturated hard seltzer market. At the same time, SanTan was ramping up its spirits production and decided to implement its vodka into a ready-to-drink cocktail. “When it came to deciding the three flavors, the biggest thing was we didn’t want to make the same flavors that everybody else does,” Fontes says.

Feedback from consumers indicated that popular flavors like black cherry and mango were played out, so they decided on profiles that were slightly different than the rest. “It was a bit of, ‘How do we stand out without being too different?’” Fontes explains. “We didn’t want to come out with kiwi fig peanut butter seltzer. We wanted to create simple flavors that also have some uniqueness to them as compared to what’s already available on the market.”

Another important factor in the development of SunSplash was iterating that its locally made. Fontes says the team tried to put as much reference to the Grand Canyon State as possible on the drinks’ packaging.

“We tried to put ‘Arizona’ as much as we could on that box. The can itself, the very top lip of the label says, ‘Crafted in Arizona,’” he says. “We want to highlight to people that, yes, we truly believe that the flavors are going to stand out better than some competitor versions, but we hope that the local tie-in really helps seal the deal for people.”

The name SunSplash evokes summertime in Arizona, going to the lake or hanging out by the pool, Fontes says. “A vodka soda screams, ‘Drink this under a hot sun’ and the splash idea just came naturally.” The can art reflects this concept with a sun setting over the waves.

With zero sugar, 100 calories and 5% ABV in each can, SunSplash is dangerously drinkable. “We realized that people want to enjoy a few, not just one or two of them,” Fontes says.

Eventually, SanTan will release ready-to-drink whiskey sodas with a higher ABV. Right now, the team is focusing on developing a sweet peach bourbon and will likely put out its whiskey seltzer products next year.

SunSplash is currently available at select restaurants and retailers throughout the Valley. Fontes says he hopes it will become the most popular canned cocktail in the state. The next step? “World domination one place at a time.”