2021Best of the ValleyPeople & Media
Editorial StaffJuly 6, 2021
Share This

Our editorial picks for local personalities and media consumables.

Fitz maybe isn’t a Cardinal next season? Doesn’t matter. The presumptive Hall of Famer still got a slew of support in our PM staff poll, splitting the top spot with sexy D-backs slugger Peralta.

No strangers to PM readers – Devine was on the cover of our 40 Under 40 issue three years ago; Pasmore is our brisket judge on page 144 – the respective 12News and 3TV anchors split the prize.

Unlike many – too many – of his fellow Congressbeings from Arizona, the former Phoenix mayor keeps his nose down, does his job and doesn’t make an ass of himself. We like that.

Best known for his murals at Calle 16 and Roosevelt Row – Carly’s Bistro has a bunch – the self-taught folk artist is essentially the Larry Fitzgerald of Phoenix street paintings.

Any way you lip sync it, Joey Jay electrified a drab pandemic when he became the first Phoenix resident to strut into RuPaul’s Drag Race. Although the imaginative performer sashayed off far too soon, he still managed to draw attention to Phoenix’s illustrious drag scene – and his fierce talent. Catch him at 10 p.m. Fridays at Kobalt Bar in Phoenix for the 4Some Revue. Instagram: @joeyjayisgay

59-year-old personal trainer and health advocate Kim Fisher helps women over 50 “transform from unfit and discouraged to fit, centered and empowered,” through workshops, fitness and lifestyle retreats and personalized fitness programs. A personal trainer for 38 years, Fisher fills a void in the fitness industry and encourages women of a certain age to reach for the stars. divaoverfifty.com

Fun fact about the Arizona Cardinals’ sack-amassing defensive end, signed as a free agent over the off-season: Growing up in Pewaukee, Wisconsin, the now-6-foot-5, 288-pound bruiser dreamed of playing hockey in the NHL, devoting himself fully to the sport until football became his main focus in high school. Good news for Cardinals fans and for present-day NHL wings, who don’t have to worry about getting creamed by Watt in the crease.

One basket. That’s how close the Wildcats came to claiming a long-sought NCAA Women’s Basketball championship. Behind senior guard Aari McDonald, who led the Pac-12 in points and steals, the No. 3-seeded squad made a rousing March Madness run at the title, succumbing by the barest of margins to conference rival Stanford, 54-53. En route, head coach Adia Barnes and co. gave us a season that all Arizonans could admire. arizonawildcats.com/sports/womens-basketball

Recently listed for sale, the ex-action star’s fortified mountain manse in Scottsdale features bulletproof glass throughout, including the skylights. Prospective buyers evidently do not share the Hard to Kill actor’s assassination concerns. Despite the unique upgrade, the home has reportedly been hard to sell – the asking price dropped from $3,775,000 in 2019 to $3.5 million in 2021. 9325 E. Brahma Rd., Scottsdale

If you want to hear some rock ’n’ roll, there are plenty of venues to catch a show. But if you crave a real party, head west to Haus Murphy’s in downtown Glendale to hear the Wisconsin transplant squeeze out some German drinking songs four nights a week. 5739 W. Glendale Ave., Glendale, 623-939-2480, hausmurphys.com

You’d be hard-pressed to find a more treasured person in the Valley food-and-bev scene than Lewis, wine director and sommelier at Kai at Wild Horse Pass. He’s usually the one rallying to support all things local ­– but now he needs support. In January, Lewis was diagnosed with stage 4 adenocarcinoma. The father of two is fighting hard, but medical bills add up. Contribute to his fight at gofund.me/06637ba9 and keep up with his journey at facebook.com/pimabearsfight.

The photographer says he doesn’t capture images of violence and divisiveness on America’s streets, including a KKK rally in South Carolina’s capital, simply to chase grants. But the ASU School of Art teacher’s stunning snapshots of everything from celebrations to protests stood out from over 3,000 applicants. gf.org

Pandemic life left us feeling raw and vulnerable, and somehow the 28-year-old chanteuse behind the confessional indie rock record maybe i will see you at the end of the world felt it all coming. Luckily, she also filled the album with enough hope to get us to the other side. sydneysprague.com

Recessions. Grave health issues. A “business divorce.” A real divorce. Personal tragedies. Shuttering a pioneering restaurant. A pandemic. Plumbing fiascos. What hasn’t this woman been through? Somehow, despite the hits that keep on coming, she continues to rise. If Phoenix had a chef laureate, there’d be no better representation of the spirit of our namesake than this “chingona” icon. Instagram: @chefsilvana

Do you ever scroll through someone’s Instagram and think, “I wish they were my friend in real life”? That’s how we feel when we look at recipe developer and “kitchen witch” Joseph Cuevas’ feed. Whether he’s sharing a showstopping vegan cake he baked and decorated, listing the best ways to cleanse a space or explaining the healing properties of a mocktail, we are here for it. Instagram: @thoughtful_bear, thoughtfulbear.com

For decades, the local metal pioneer has shocked audiences. But in his most stunning move yet, the legend teamed up with Danzeisen Dairy and put his mascaraed mug on its chocolate milk bottle. But Cooper isn’t selling out – the proceeds benefited his Solid Rock Teen Centers. danzeisendairycooper.com

Thanks to developers The Firebrand of Phoenix, you can virtually visit an electronic recreation of the beautiful Japanese Friendship Garden. But be prepared to defend it from developers set on destroying the Downtown landmark. This 8-bit throwback perfectly encapsulates the ongoing struggle against Downtown over-development. thefirebrandofphoenix.com

When the Valley’s Sarah Ventre announced she was leaving town on a mysterious assignment, her journalism colleagues knew the results would be good – but none of us was prepared for Short Creek, a fascinating look inside the polygamous community of Colorado City, post-Warren Jeffs. Offering more than a mere glimpse of the town – Ventre embedded in Jeffs’ old house for months – this award-winning journo demonstrates the potential of a great podcast to transport us to places we never knew existed, and keep us there. witnesspodcasts.com/shows/unfinished-short-creek

The official page of the City of Phoenix Public Works Department sounds like a snooze, right? Plot twist: It’s informative and entertaining. In addition to providing tips on reducing waste, the account explains what is and isn’t recyclable (complete with photos of actual violations – we love the low-key shade being thrown) and offers trash and recycling reminders. It also boasts a video series called Between Two Cans that answers recycling FAQs – with earnestness and occasionally some subtle snark. We’ve never been so captivated by trash.

Phoenix natie and cable news personality Samuel Burke casually bought DNA test kits for his parents. The shocking results revealed that Burke’s father was raised by a man who wasn’t his biological father; and that his mother had a half-sister she knew nothing about. The 10-episode podcast, which exposes other DNA bombshells, is a cautionary tale for the DNA-curious.

Looking for an editor, a writing workshop, a poetry event, a publisher, an author talk or a way to promote your work? This collective organized by the Virginia G. Piper Center for Creative Writing at Arizona State University can help. Membership is free and open to writers of all genres, from science fiction to songwriting. A Facebook group acts as the community hub (facebook.com/groups/phxlitserv), but you can also connect at piper. asu.edu/phxlitserv

This Instagram account is dedicated to hot signs. Literally. The real-life business, street, parking and warning signs immortalized in its posts look like they’re melting from Phoenix’s unholy heat. It’s a hilariously astute summation of life in the desert. Bonus: DM the account your own hot sign pixxx for a chance to be featured.

Around these parts, it can be hard to find a voice of reason – particularly during a pandemic. Will Humble, former head of the state’s health department and now director of the Arizona Public Health Association, calls ’em like he sees ’em, with a refreshing lack of spin or politically convenient double-speak. Read all about it on his blog. azpha.org/wills-blog

The pandemic threw Thomas Houlon and Patty Barnes’ in-person intellectual salon for a loop. After a quick digital pivot, though, they’re reaching more people than ever before – and not just in the Valley, but around the world. Join a virtual salon to learn about topics as diverse as diets, neuroscience, architecture and cybersecurity. spiritofthesenses.org

What your partner likes is as important as what they are like, and Valley businesswoman Rachel van Nortwick seized upon that notion to develop a music-based dating app. It matches people based on your favorite performers, including a Suggest Concert feature when it’s time to meet IRL. vinyllyapp.com

If you’re of a certain age, you remember Linda the Librarian from the earliest days of Sesame Street. But did you know that Linda Bove, who is deaf and communicates using sign language, lives here in Arizona? She starred in last fall’s Voter Education Guide – a bright spot during a tough time. azcleanelections.gov/arizona-elections/voter-education-guide

As part of an Art Detour event, Phoenix ceramicist Patricia Sannit asked visitors to her studio to mask up and make casts of their hands. From the artist’s statement for Many Hands Hold Me: “We fare better when we cooperate. We feel better when we can hold each others’ hands.” We can applaud that. patriciasannit.com

Forget hiking Camelback. If you want to catch a great view of Downtown Phoenix, head to Tempe to check out the million-plus LEGO bricks that master model builder Posta used to construct the detailed urban landscape, right down to the unusual hue of a light rail stop bench. 5000 S. Arizona Mills Cir., Tempe, 855-450-0558, legolanddiscoverycenter.com

When Phoenix artist Jen Urso realized she had collected a list of spots around town with gorgeous cactus – most notably the Phoenix Financial Center on Central Avenue – she set out to map them. The result is a unique and beautiful celebration of our desert city. jenniferursoart.com

If you think sculpture means carving muscled men from marble, think again. Lubitsky uses jigsaws, recycled awning parts, sound and even herself. For one installation, she floated a toaster over a bathtub she was soaking in. For another, a neon sign spelling “liar” pointed down in a chair, where viewers sat. And that awning? Now a 6-foot lemon. studiolubitsky.com

This Guadalajara native begins by flipping through books and magazines. She then cuts images free and rearranges them into surreal forms. In one collage, a fish chews a pearl necklace attached to two unicycles. A gymnast balances on the rings of Saturn in another. With hands, people, plants and space as prevailing themes, Rivera’s collages galvanize the human imagination. Instagram:
@lacollagist

Following a $5 million settlement with American Honda Motor Company over defective airbags, the Arizona Attorney General put himself in heavy rotation on Valley airwaves, beseeching motorists to take advantage of safety recalls. Good on him. Safety is very, very important. But we can’t help but wonder if the bearded prosecutor’s prominent placement in those state-funded ads was slightly informed by his recently announced U.S. Senate campaign, and not just airbags in a bunch of old Civics Honda has been trying to replace for the last decade anyway. Remember the beard on Election Day!

First elected to the Arizona House of Representatives in 2018, Longdon – who was paralyzed in 2004 in a random drive-by shooting – is not just a win for diversity. Representing Central Phoenix, she’s also a steadfast, articulate defender of education, equality and health care. jenforaz.com

In a fit of anti-masker apoplexy, Valley PR pro Lively – aka “QAnon Karen” – went viral last summer when she live-streamed herself trashing a mask display in a Scottsdale Target. After spending a few weeks in treatment at The Meadows, she went on a national publicity tour of sorts, offering a narrative of QAnon-exacerbated mental illness that the American news media couldn’t resist. A career-ender? Don’t tell Lively that. She obliquely boasts about the post-meltdown interviews on her agency website: “As seen on Forbes, USA Today, Daily Mail, Yahoo, MarketWatch, Fox News and the Washington Post!” A regular spin class, that. thebrandconsortium.com 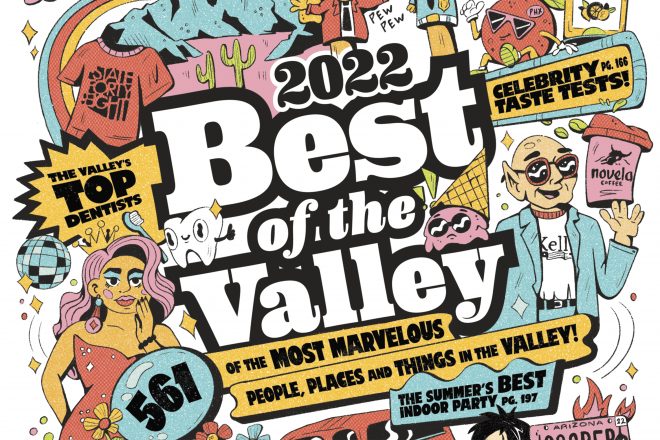 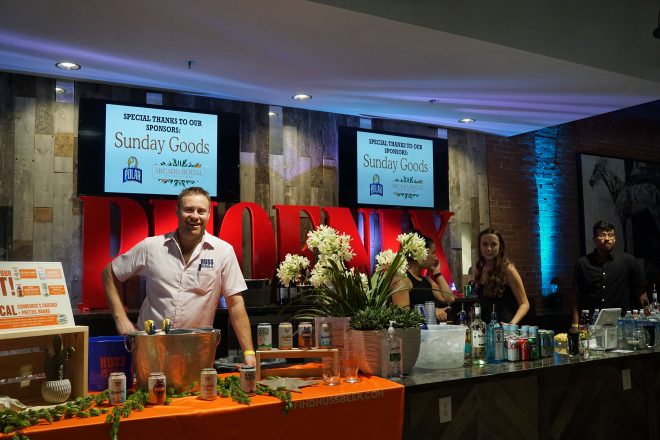