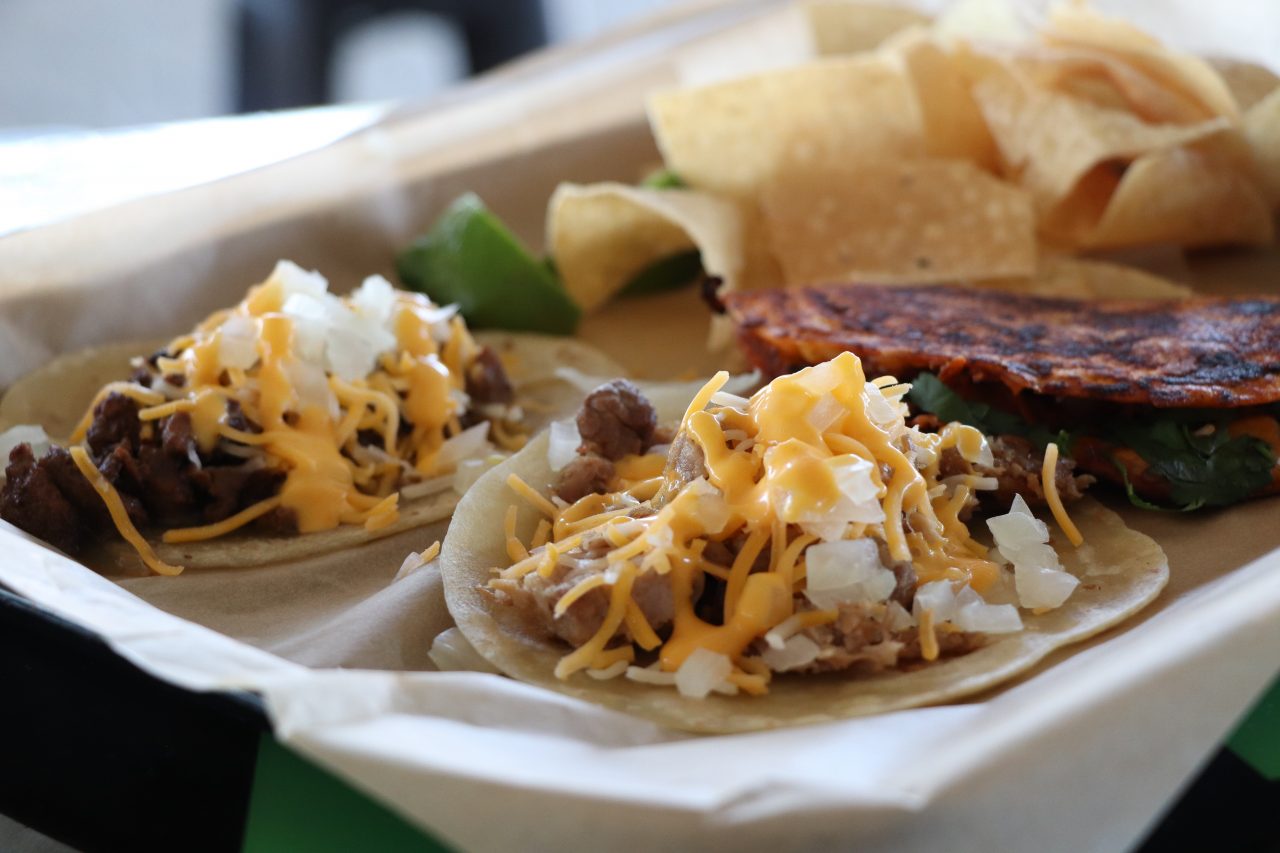 Against the backdrop of a black and white Day of the Dead mural, and with a three-piece mariachi band serenading us, two friends and I grabbed an outdoor patio table to chow down on the hugest taco the three of us had ever seen. It was the grand opening of Eat My Taco, and as we dined under brightly colored papel picado banners, I felt a sense of certainty that I’d definitely be coming back to the new Tempe taco joint soon. A welcome addition to Tempe’s Mexican restaurant scene, the cheekily named Eat My Taco opened up on University Drive in early April, just blocks away from the downtown Mill Avenue district and Arizona State University’s main campus. With a casual atmosphere and reasonably priced menu, it’s a high-quality but budget-friendly go-to for nearby college students, the perfect location for a family outing, and with it’s Day of the Dead-themed interior, a totally Instagram-worthy attraction for folks like me who must take a picture before digging into a meal. The restaurant’s street tacos, ranging from $2.75 to $3.99, are among its bestselling items but the fan favorite here is the birria taco. The traditional Mexican dish is made with shredded beef in a tortilla that has been dipped in birria sauce, grilled on a flat top and covered with melted Colby jack cheese, onions and cilantro.

For some slightly less greasy but equally delicious fare, we tried the carne asada and pork carnitas tacos on corn tortillas. Eat My Taco’s Chipotle-like ordering system allowed us to get creative with our choices of toppings and sauces as we moved along the line and crafted our tacos. I had avocado sauce drizzled across one, and habanero nacho cheese sauce on the other. Regardless of the choice of meats or sauces, any taco here is best paired with a cold Mexican Coke. In celebration of the grand opening, the owners kindly brought us their largest menu item, the Big Cheese Taco, on the house. With shredded cheese, tomatoes and lettuce overflowing from the restaurant’s largest flour tortilla (and carne asada somewhere underneath it all), there was no neat way to approach this monstrous dish. Even with two friends there to share with, we couldn’t finish it. As a result, we were too full to make it to dessert. That being said, the main dessert item, the Churro Loko, looks like a great spin on a classic Latin American dish. There are options to top the delicious fried dough snack with caramel, ice cream, whipped cream or even cereal. That’s been giving me motivation to come again soon.