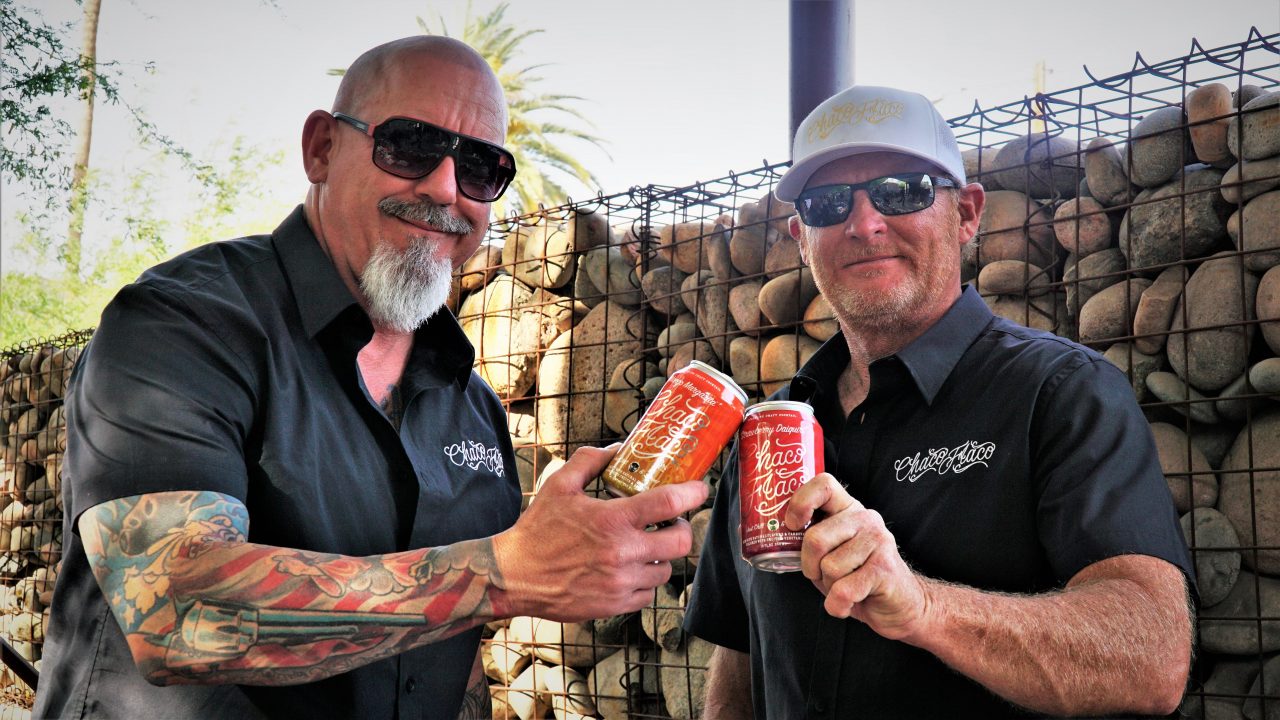 Moore, who has a background in mixology and bar management, started making margaritas in his blender at home and bringing them to Dos Gringos in Tempe in empty milk jugs. They were an instant hit.

By 2014, his products were on the shelves of Valley Whole Foods and AJ’s. Chaco Flaco became Moore’s moniker – a nod to his childhood nickname, Chaco – and “clean and natural” became his mantra. (“Flaco” means “skinny” in Spanish and his drinks are made with fresh fruits and vegetables and don’t contain any preservatives or high-fructose corn syrup.)

Five years ago, Moore met his business partner Steve Cislaw, who believed in the product and was just as dedicated to getting into the hands of consumers. The duo had success with cocktail mixers but were eager to get into the canned cocktail sphere.

“A lot of our competitors now, they kind of paved the way for us, which was a blessing because we knew that there was validity in that space,” Cislaw says. “At that point, we knew we had something. We knew our flavors were out of this world and we went through the process of starting to formulate these cocktails we were launching and they turned out amazing.”

Chaco Flaco developed three flavors: Mango Margarita, Vodka Berry Mule and Strawberry Daiquiri. Each 12-ounce can contains a sparkling, ready-to-drink cocktail with a 6 percent ABV and between 160 and 190 calories. Chaco Flaco uses natural sweeteners to lower the sugar and calorie content and wanted to keep the alcohol content at a lower level – “so you can have one and not get hammered,” Moore says.

“We felt that these three really defined who we are as a company and what sets us apart,” Moore explains. “We’re not your vodka soda, we’re not your whiskey mule. We’re a vodka berry mule, which has four berries, cucumber, ginger beer and vodka. The reaction we’ve been getting lately is, ‘How the heck did you get this in a can?’”

The team chose these flavors to appeal to a spectrum of palates. “Our strawberry daquiri is on the sweet side. The berry mule, middle of the road,” Cislaw says. “The margarita – it’s got that flavor, that pop, that kick and a little bit of heat on the back end for a more savory drink. We’ve got a little bit of something for everybody.”

As a new company, Moore and Cislaw admit that acquiring shelf space and distribution can be a bit of a challenge, especially with the burgeoning hard seltzer scene. However, Cislaw says Chaco Flaco is not a seltzer, it’s a specialty craft cocktail served in a can – something that sets them apart from the competition.

And the flavors speak for themselves. The Mango Margarita is smoky with mango and pineapple notes and a hint of habanero, the tropical Strawberry Daquiri boasts tastes of coconut, pineapple, strawberry and lime and the Vodka Berry Mule is a tangy medley of berry, mint, cucumber and ginger.

“A lot of people in the beverage industry will go out there and have a cool can and a flavor that is halfway decent and they throw it on the shelf and they expect people to come running,” Cislaw says. “It just doesn’t work that way. You have a limited time and if you can prove yourself to these retailers that you have a viable product, people are going to keep asking for it.”

But Moore and Cislaw put a lot of thought into the branding, as well. The drinks have a Dia de los Muertos (Day of the Dead) theme featuring subtle, yet festive flourishes on the cans and boxes.

“During COVID, we were actually able to completely rebrand ourselves,” Moore says. “We were getting a little bit of pushback from certain markets in the Midwest about having the skulls… We didn’t want to completely cave into the market, so we kept a little bit of that, but we focused on the packaging as far as what’s inside the can and the logos and made that more bold.”

Chaco Flaco’s canned cocktails launched in AJ’s Fine Foods on May 1 and are available at select bars and restaurants around the Valley. Before the drinks were even available in four-packs, Chaco Flaco won prestigious awards in the spirits sector, including a Sip Award and a Las Vegas Global Spirit Award.

Moore and Cislaw are also avid skateboarders, surfers and snowboarders and music aficionados, so they wanted to create a lifestyle brand that encompasses their passions for sports and the arts. They are also big on charitable giving and working with the community. “That’s how we’re going to come up through the ranks,” Moore says. “We’re a small mom-and-pop outfit, but we have a lot of flavors and ideas and resources, too.”

Soon, consumers can catch Chaco Flaco at sports facilities and music venues throughout the Southwest. The team plans to launch in California, Colorado and eventually, the UK.

“Ultimately, we want to create a healthy buzz,” Cislaw says.