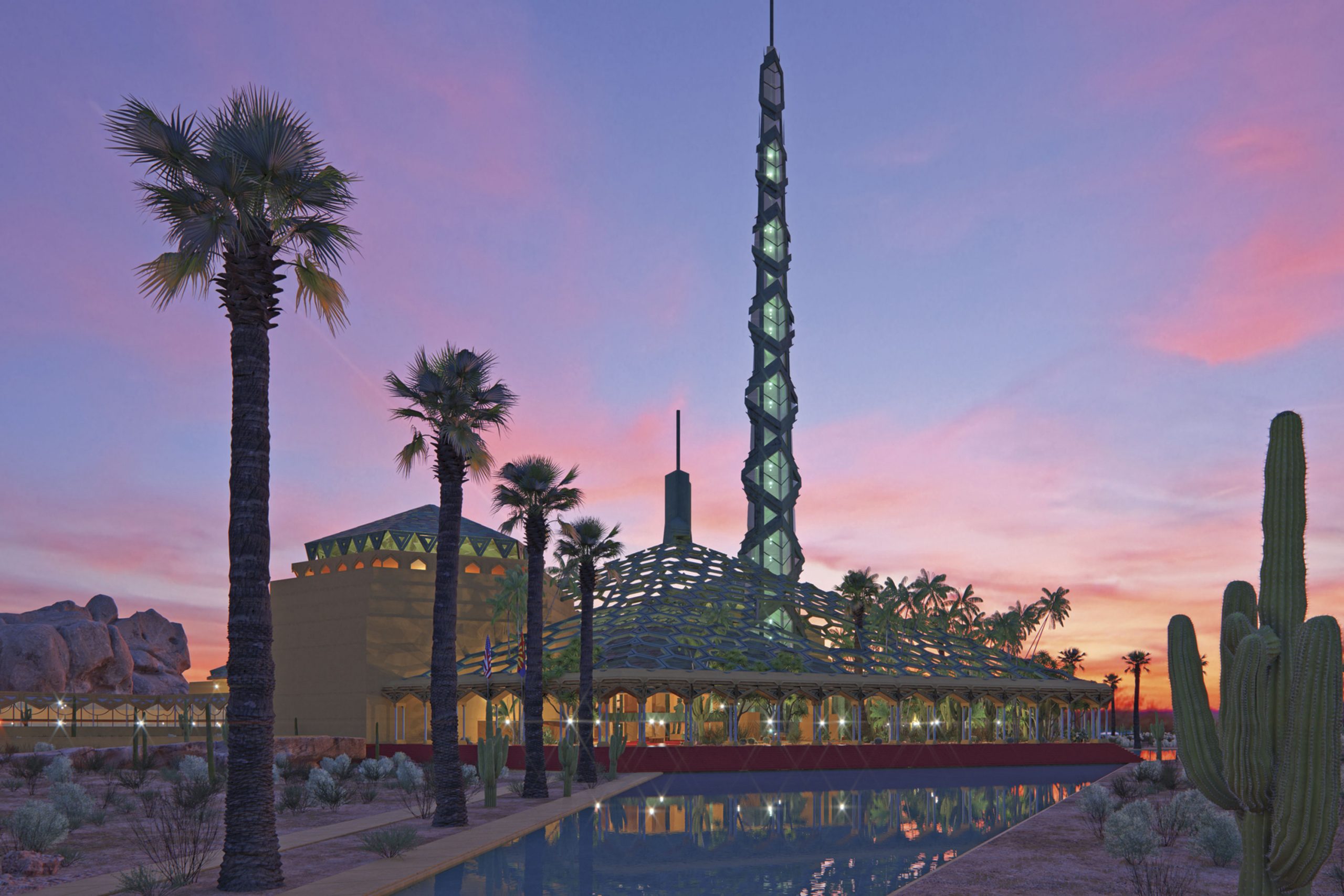 It was a chilly morning in February 1957 when Phoenix Gazette reporter Lloyd Clark met with Frank Lloyd Wright in his office at Taliesin West. A few days earlier, the newspaper had published plans for Arizona’s new Capitol. Clark had reached out to Wright, who at the time was perceived as the world’s foremost living architect, for his reaction. Wright, unimpressed with the proposed structure, responded, “The thing is its own comment on Arizona and Phoenix.” Clark’s meeting with the architect sparked a controversy that would dominate the media and divide the city for much of the year.

The Capitol’s turbulent architectural history dates back to when Arizona was still a territory. The original four-story, copper-domed Beaux-Arts statehouse on West Washington Street was built in the late 1800s and opened in 1901. Designed by Texas-based architect James Riely Gordon, it was constructed of Southwestern materials at the cost of slightly more than $100,000. According to a 1941 report by politician Mulford Winsor, taxpayers at the time denounced the project as a “useless extravagance.” Their assessment proved in some measure to be correct.

Five decades later, the building was plagued with leaks and pest infestations, lacked proper heating and cooling, and was severely undersized. “One of the consistent themes in Arizona history is that we’re constantly needing to create more space for state agencies that grow as the population increases,” says Stephanie Mahan, senior administrator of the Arizona Capitol Museum.

A collective of architects from the state’s top firms, known as Associated State Capitol Architects, was commissioned to design a new, larger building. The group came up with plans for a 20-story office tower flanked by low wings that would accommodate the House and the Senate. Estimated at $8 million, it would be adjacent to the existing Capitol. Wright didn’t think much of the proposed structure, referring to it as “a building that can be found in any duplicated skyscraper style of a hundred cities.”

Stuart Graff, president and CEO of the Frank Lloyd Wright Foundation, agrees with that assessment. “[The design wasn’t] much different than a lot of other government structures that were built at the time. It could have just been any old office building.”

When Clark met with Wright, he asked the architect if he had any ideas for the building. Wright picked up a pencil and paper and began to draw. As he sketched, he talked. “A Capitol in the sun country should not resemble anything in New York City,” he explained.

In a bow to tradition, he drew a dome, but it was unlike anything one might expect. A 400-foot-wide hexagonal latticework canopy, plated in blue oxidized copper and supported by a colonnade of native onyx, stretched over lush botanical gardens teeming with native flora. Fountains connected interior spaces to reflective pools outside. In the center was a glass-enclosed atrium that would display work by Arizona artists. Flanking the gazebo-like creation were two hexagonal domed halls, sheathed in blue copper, that would accommodate the House and Senate. The governor’s offices would be at the rear of the complex. Wright wanted his creation, “Oasis,” to be a welcoming place for all. He envisioned it amongst the red sandstone formations of Papago Park. 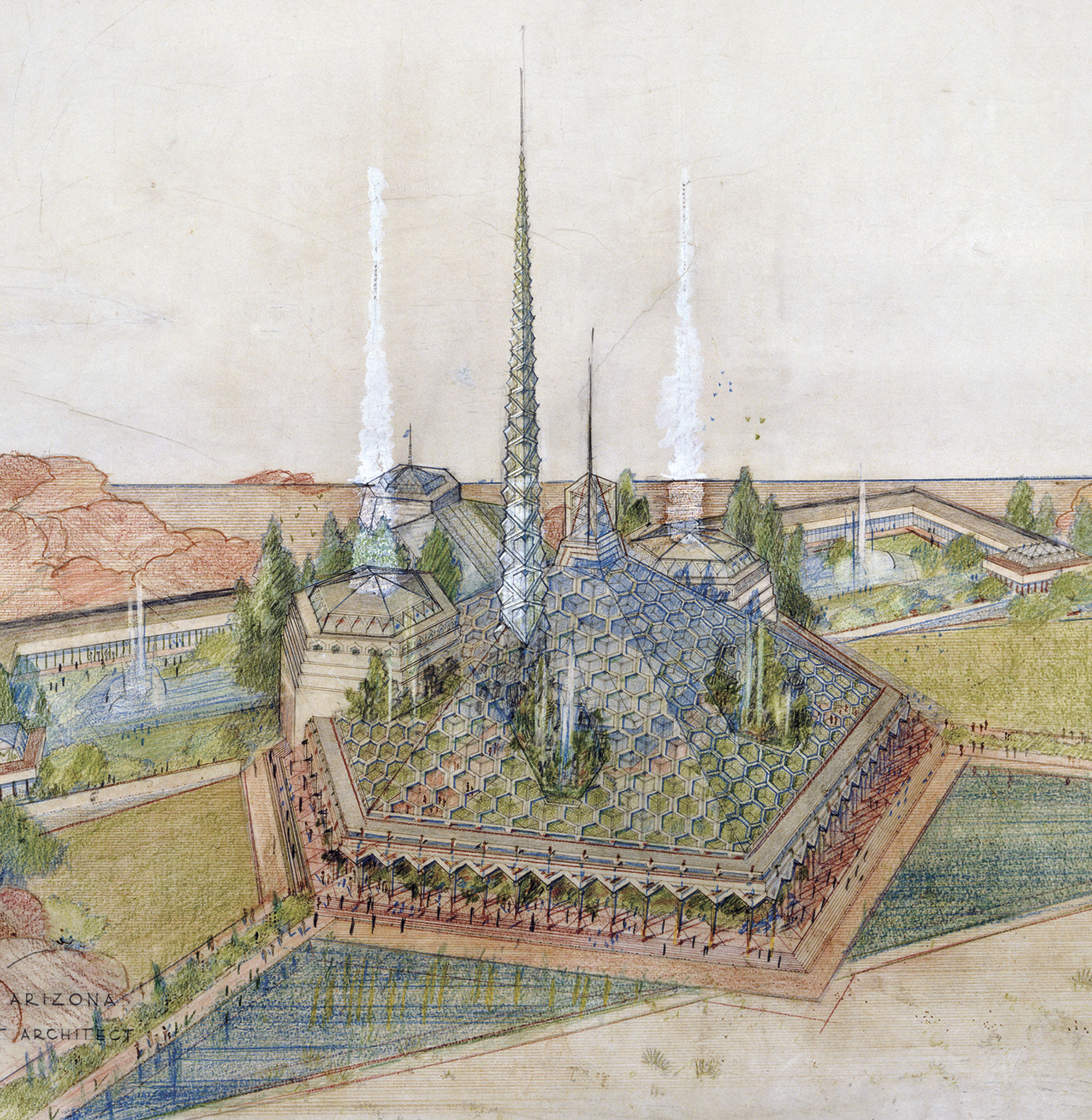 It was rare for Wright to make a design without a commission, and he was never invited to present it, but he wanted to offer a gift to his adopted home state. “I have never done anything for the people whose community I have enjoyed for 25 years. I want to do something about that.”

On April 5, 1957, he shared his drawings at a press conference at the Westward Ho hotel. In an announcement the week before, Wright said he felt “a compulsion to speak out in support of fundamental beauty.” The famously imperious architect suggested that the public, not the government, should choose the design.

The response from officials and citizens was divisive. Newspapers across the state ran articles and opinion pieces that analyzed the pros – at $5 million furnished and equipped, it was $3 million less than the proposed skyscraper – and cons – its exotic design that was likened to everything from a “glorified tent” to “an Arabian night’s fantasy” to an “oriental whorehouse,” as well as its location.

In a November 1957 letter to the editor of Arizona Architect, Wright’s apprentice Charles Montooth wrote that the Oasis plan “is the most appropriate Capitol proposal for our state. No sensible person would seriously question our most experienced architect’s artistic judgment any more than he would question… Bach or Rembrandt… To accept mediocrity when greatness is offered is to degrade ourselves.” Henry R. Luce, then editor-in-chief of TIME, Life and Fortune, said, “If they were accepted, the buildings would rival the Grand Canyon as a tourist attraction in Arizona.”

Supporters petitioned to give voters a say in the next general election. Wright even began a campaign, appealing to high school students and encouraging them to write letters of support to local leaders. Opponents were just as vocal, noting Wright’s “contempt of the common man” and accusing the city of “hero worship.”

In an April 1957 statement, Albert B. Spector, attorney and spokesman for ASCA, said the skyscraper plan would add 300,000 square feet of civic space, while Wright’s design offered only 212,000 and required many offices to remain in their present location. Spector commented on “Wright’s complete failure to understand the complicated flow of work between all the administrative agencies, the governor’s office and the Legislature.”

In the end, Wright’s decision to site the Capitol in Papago Park would be the project’s downfall. Because it is located outside Phoenix city limits, placing government buildings there would violate the Arizona Constitution.

“It’s a shame it was never constructed,” Graff says. “When I look at Arizona’s history, there’s a fundamental optimism that is embodied in the decision to create the state. Frank Lloyd Wright’s Capitol design really epitomized that spirit.”

Adds Jeff Goodman, vice president of communication and partnerships for the foundation, “The design encapsulates what Wright was trying to do as an architect… which was transcending time and celebrating the land.”

After an uncertain 2020, Taliesin West, Frank Lloyd Wright’s winter home, is ready to greet post-pandemic visitors with restored spaces and new offerings. Here are some of the things you can expect.

The Guided by Wright tour uses modern audio and app technology mixed with historic recordings of Wright’s own voice to provide guests with a multisensory experience that offers a deeper understanding of the architect and his ideas.

Thanks to the work of the Frank Lloyd Wright Foundation’s collections and preservation teams, the rooms at Taliesin have been reinterpreted and rearranged, making the home more authentic and accessible. Don’t forget to check out the restored collection of Asian screens.

H&S International, an award-winning architecture firm founded by Bing Hu and Wendi Shi, has opened a new branch, the Taliesin West Studio. Visitors can get a glimpse of the architect at work in the Drafting Studio.

Taliesin West is open daily from 10 a.m. to 4 p.m. For more information, go to franklloydwright.org. 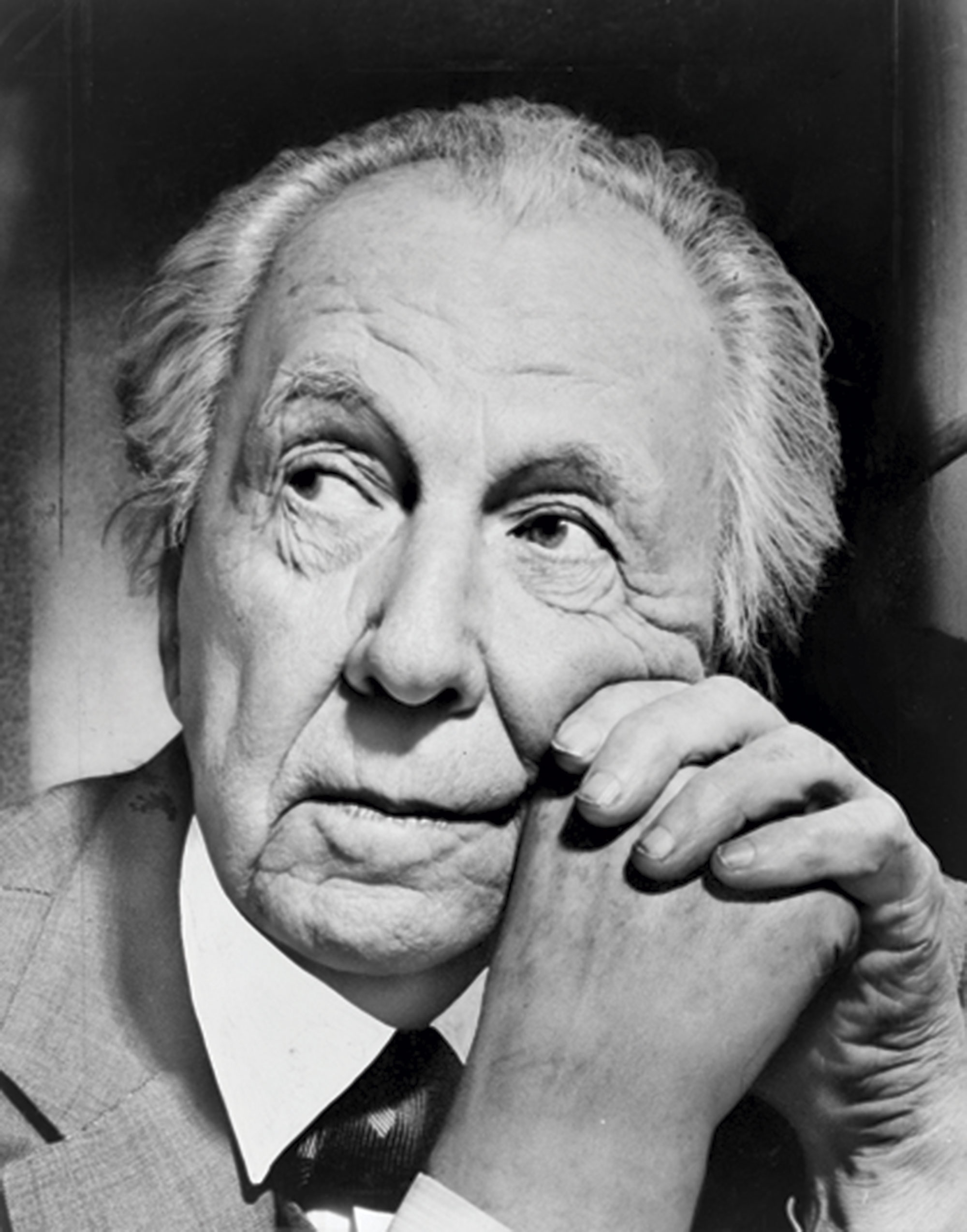