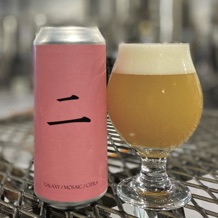 Beer and ramen? We like the sound of that. Such are the dual passions of multi-versed culinarian Tyler Smith, who hopes to open the Kitsune Brewing Co. and Ramen Shop in Cave Creek later this year. In the meantime, Smith has joined forces with Simple Machine Brewing Co. in North Phoenix to can his first generation of brews, becoming Arizona’s first African American commercial brewer in the process. (Know the cans by the elegantly spare, primary-color label design and Kitsune’s signature anime-style fox mascot.) Smith’s four extant beers are headlined by this lush spring sipper, brewed with Galaxy, Mosaic and Citra hops for maximum citrus-stone fruit refreshment. Pair it with grilled chicken or a wedge of Manchego. Or ramen. kitsunebrewingco.com