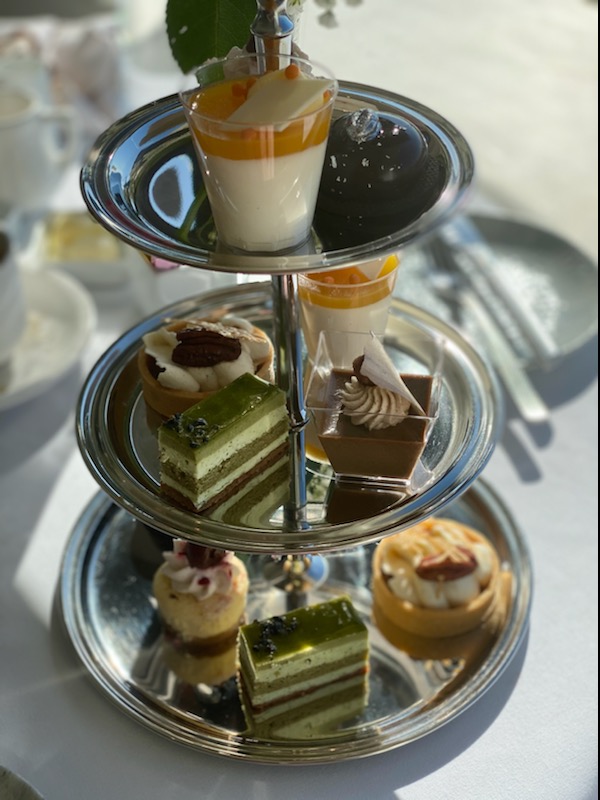 My server at the Wrigley Mansion’s onsite restaurant, Geordie’s, tells me that the estate was originally built by chewing gum magnate William Wrigley Jr. as an anniversary gift for his wife. Constructed in 1929, the Mediterranean-style manse still sports some of its original tiles, which were shipped from the family’s factory on Catalina Island and ferried up the small slope by mules. It’s an elaborate tale, one that is not at all surprising now that I’m four mimosas deep (they keep magically appearing as soon as I finish them), perched on a royal blue button-tufted chair in an airy dining room high atop a hill in Phoenix’s ritzy Biltmore area. It’s clear that the confectionary tycoon’s penchant for panache has been preserved through the decades. In the early ’90s, Geordie Hormel saved it from turning into a condo complex, so you can thank the late musician and meat-packing heir for the mansion’s magical brunch experience – the Hormel family still owns and operates the property and named the restaurant after him.

Ashley Goddard, in addition to being a humble, lovely human being, is Geordie’s award-winning chef de cuisine. She switches up the restaurant’s brunch menu every Sunday, focuses on local, seasonal ingredients and deftly incorporates sweet and savory flavors into each weekly offering.

I’ve expressed before that I believe dining out should be an experience, especially with the increasing impulse to order takeout. Going out to eat should only be done when it’s guaranteed to be worth it. Well, I’m here to tell you that brunch at Geordie’s most certainly is. As you might imagine, brunching at a mansion is a particularly opulent affair. The ceiling is studded with crystal chandeliers, the walls are lined with silver mirrors and each table is draped with a white tablecloth and girded by those aforementioned azure chairs. Your maître d might even ask you if you would like a matching velvet stool for your purse before inquiring what you’ll have to drink.

An elegant, enjoyable soundtrack is provided by a 1920s Steinway. More fun Wrigley history: One of only two of the company’s player pianos in the country, Steinway had to send a team from New York to assemble it inside the mansion because the instrument was too large to fit through its doors.

Pre-pandemic, brunch ($54 per person) was served buffet-style, but Goddard reimagined the menu for the COVID era – bringing a smorgasbord of fresh fruit, breakfast pastries, charcuterie and mini desserts directly to your table. An all-you-can-eat array of other small plates such as smoked salmon and grilled shrimp and made-to-order entrees including Belgian waffles and crab cakes are also available. Enhancements such as caviar, foie gras and shaved black truffles can be added to any dish for an additional charge.

It’s hard to ascertain the apex of this truly astonishing experience. Was it the service (I’m telling you – the mimosas just keep coming)? The décor? The presentation? The freshness and flavor of the food? The fact that I got to chat with Goddard herself when, in between a constellation of oscillating waitstaff, she materialized at the table?

Perhaps it was the pineapple-shaped butter served with the pastries (the tropical fruit is a symbol of warmth, friendship and hospitality and a Wrigley tradition). No, it had to be the fresh baked breads themselves (assorted muffins, croissants and other pastries). Actually, it was the imported and domestic cheese plate and prosciutto complete with cornichons and fresh mustard seed spread. But the French press coffee was freshly steeped. And I had about six servings of the garlic herb shrimp. Surely it had to be a tie between the cassis Belgian waffles topped with raspberries and real whipped cream and served with a shooter of syrup and the Creole crab cake crowned with microgreens and a tangy remoulade.

But just when I thought this paradox of choice had concluded, my server swung by with yet another tempting component of this magnificent multicourse meal – dessert. And in true Wrigley fashion, it was extravagant – a tiered tray of tiny treats, a kaleidoscope of miniature cakes, tarts, puddings and mousses.

Surprised that I could even muster the energy to mosey around after such a decadent feast, I decided to explore the property. I roamed private dining rooms, palatial hallways, grand staircases and sweeping balconies, imagining what Wrigley’s wife must’ve thought about such a lavish gift, and feeling like one was just bestowed upon me, too.