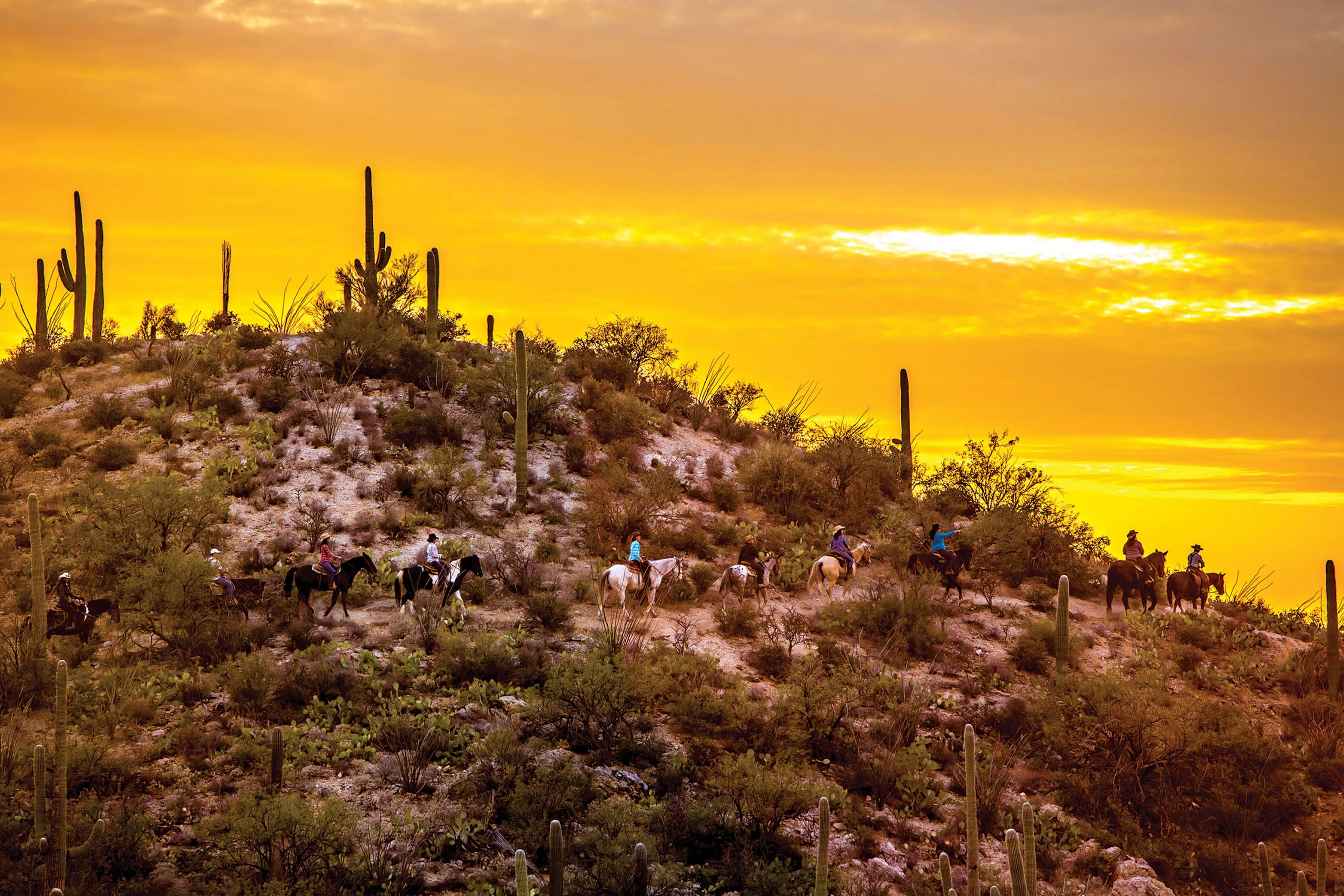 Phoenicians have long answered the siren call of the Old Pueblo’s weekend diversions – homecoming games at University of Arizona, road trips to rock shows at Rialto Theatre, cruises down Congress Street and mandatory stops for sushi at Kazoku.

To me, driving to Tucson seems like a rite of passage for Phoenix residents. In my eyes, it’s the Valley’s more mellow cousin, with cooler temps, a concentrated downtown and quirky features like Casa Video, Arizona’s lone Blockbuster-esque video store and cinema. Casa is a destination in itself and definitely worth the two-hour trek from the Valley.

As much as I’ve traveled to T-Town, I was previously unaware of what is perhaps its best-kept secret – a sprawling oasis nestled where the sidewalk ends on Speedway Boulevard. Take a winding road all the way to a dead end where rustic signage indicates you’ve reached Tanque Verde Ranch (tanqueverderanch.com), a 640-acre desert dreamscape with horse trails, tennis courts, swimming pools and a fishing lake.

Nuzzled up against the Rincon Mountains, the land that is now Tanque Verde Ranch was originally settled by the Pima tribe in the 1600s. Sonora-born squire Don Emilio Carrillo started ranching here in the 1860s and subsequently sold it to cattleman Jim Converse in 1928, who opened the property to an eager public willing to pay a fee to experience the ranch lifestyle. In 1969, Bob Cote took over and introduced an array of family-friendly activities to appeal to anyone who sought out rugged ranch environs with the upscale amenities of a resort.

In 2020, it’s the ideal spot for a socially distanced staycation, where visitors from the Valley can take a short drive to pastoral paradise. Sporty types can enjoy horseback riding, archery and fishing, while those looking to unwind can choose from yoga and meditation classes or various massages at the on-site spa. In fact, the lofty recreation list is slightly overwhelming, so here is a suggested itinerary for a two-night stay.

Tanque Verde has a tiny village of adobe bungalows freckled throughout the property with Southwestern sobriquets like Javelina Heights, Quail Hollow and Roadrunner Ridge. First stop: the front desk, where you’ll be greeted by an amiable concierge and sign a waiver if you choose to go horseback riding or mountain biking. Next, it’s time to check out your digs – expansive suites complete with fireplace and floor-to-ceiling windows where you can marvel at saguaro-studded hills and the towering mountains beyond. 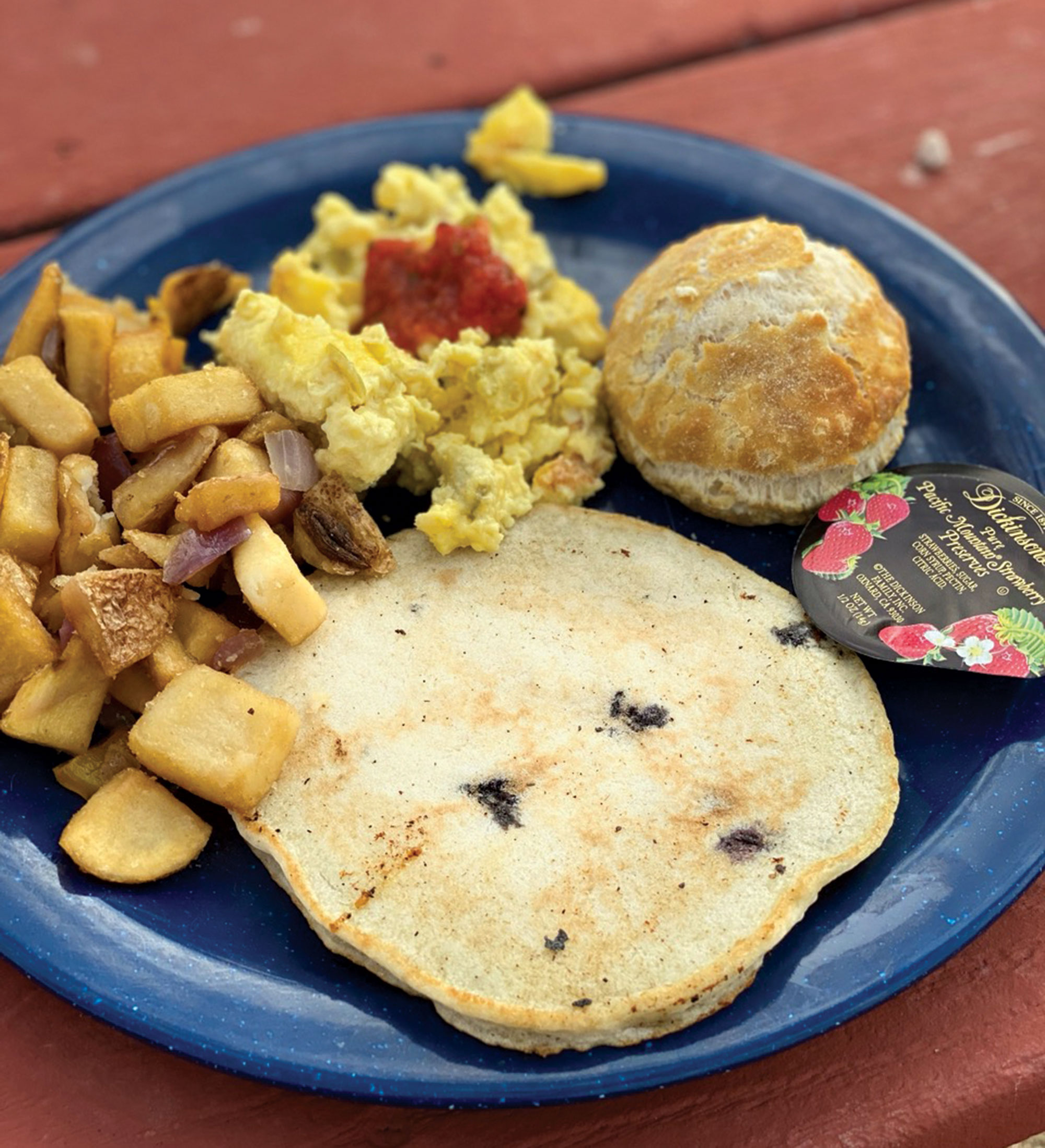 Breakfast at the Old Homestead; Photo by Madison Rutherford

The ranch’s 1.5-acre catch-and-release fishing lake is filled to the gills with sunfish, largemouth bass and channel catfish – and you don’t have to be an advanced angler to snag one. Tanque Verde’s friendly and informative fishing guide, Steve, will walk you through everything you need to know, and don’t get discouraged if you don’t catch one right away. “That’s why they call it fishing, not catching,” he’ll tell you with a warm smile. Throughout the hour-long lesson, I caught three bluegills and Steve snapped a picture of me proudly holding up my prize.

Change out of your fishing duds and head down to the dining hall – an expansive space with burgundy carpet and sweeping curtains framing a wall of windows – for some gourmet grub. On the evening of my visit, the daily rotating menu featured enticing entrees such as grilled filet mignon, chicken pesto pasta and butter-braised cauliflower steak, and potato leek soup and a fruit-flecked salad for starters. Peruse a pint-size wine list featuring Californian and Italian vino or get a taste of Tucson with a Barrio Brewing Co. beer. The top-shelf tipple, though, is the prickly pear margarita, served on the rocks with your choice of sugar or salt lacing the rim. For dessert: vanilla crème
brûlée with fresh strawberry slices perched atop a perfectly scorched shell. 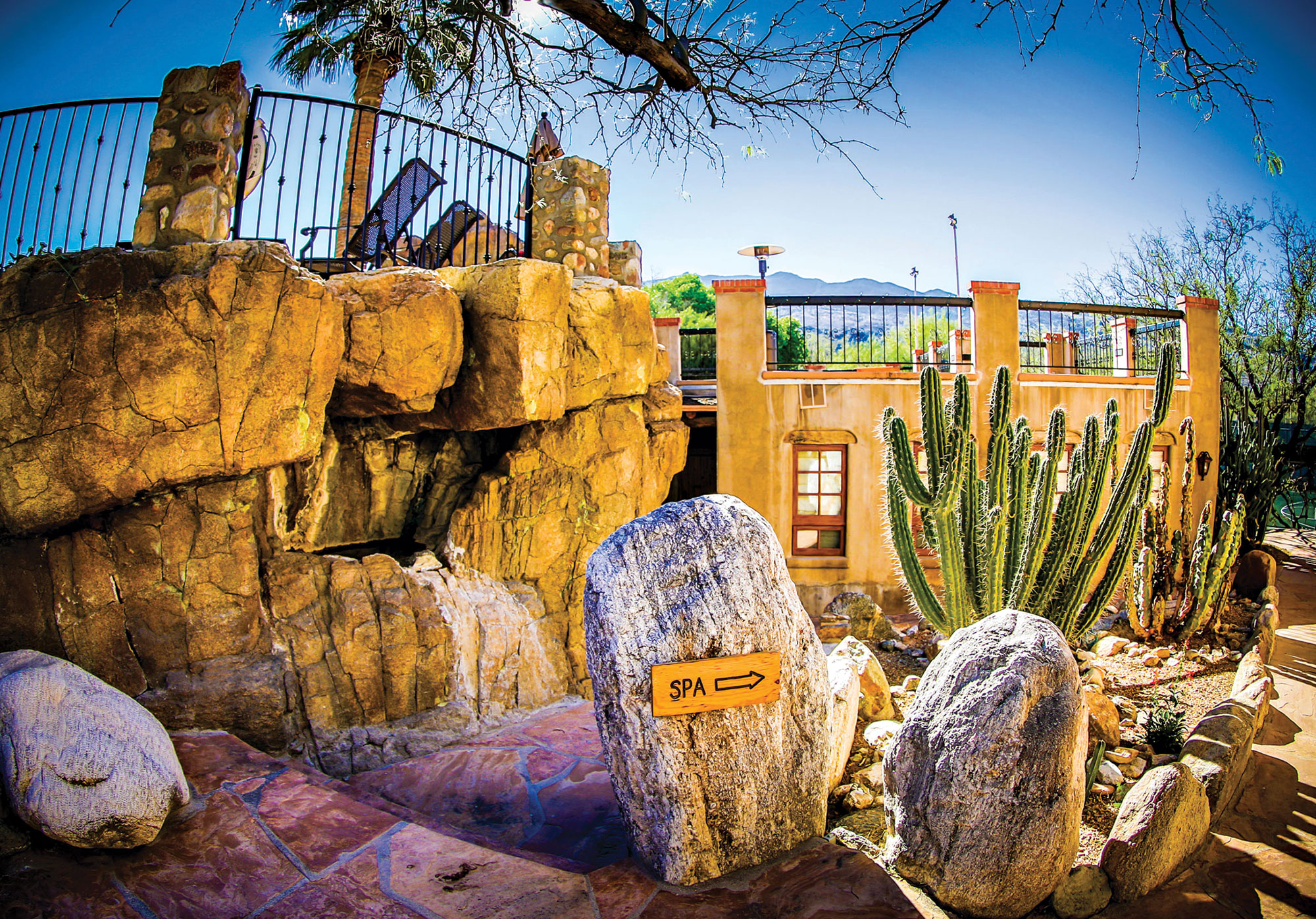 I typically prefer to sleep in while on vacation, but I was up to see the Sonoran sunrise in preparation for all the activities I had planned for the day. Options included a hike in Saguaro National Park, mountain biking, exploring the Nature Center and various horseback riding adventures. I aimed to strike a balance between exciting exploits and easygoing experiences. But first, I needed sustenance. I found it in the form of pancakes and herb hash browns accompanied by a strong cup of coffee. Breakfast was in the dining hall again, but this time, sunshine streamed in through the wide windows, illuminating the entire room and making for a lovely meal.

Terrible aim? No problem. It’s all part of the fun at the archery range, where the instructor, also named Steve, shows you how to line up your shot and let ’er rip. By the end of it, you’ll be a bow and arrow pro. I finally managed to score a bullseye after many a misfire. The secret is a positive attitude and good posture – and a few failed flings to get a feel for it.

You might not associate a historical dude ranch with finding your Zen, but Tanque Verde is all about tranquility and trying new things, and this light, one-hour class will stimulate your body and your mind.

Vanessa, the ranch’s resident yogi, guides you through a calming and uncomplicated flow that’s the right fit for both beginners and skilled stretchers. 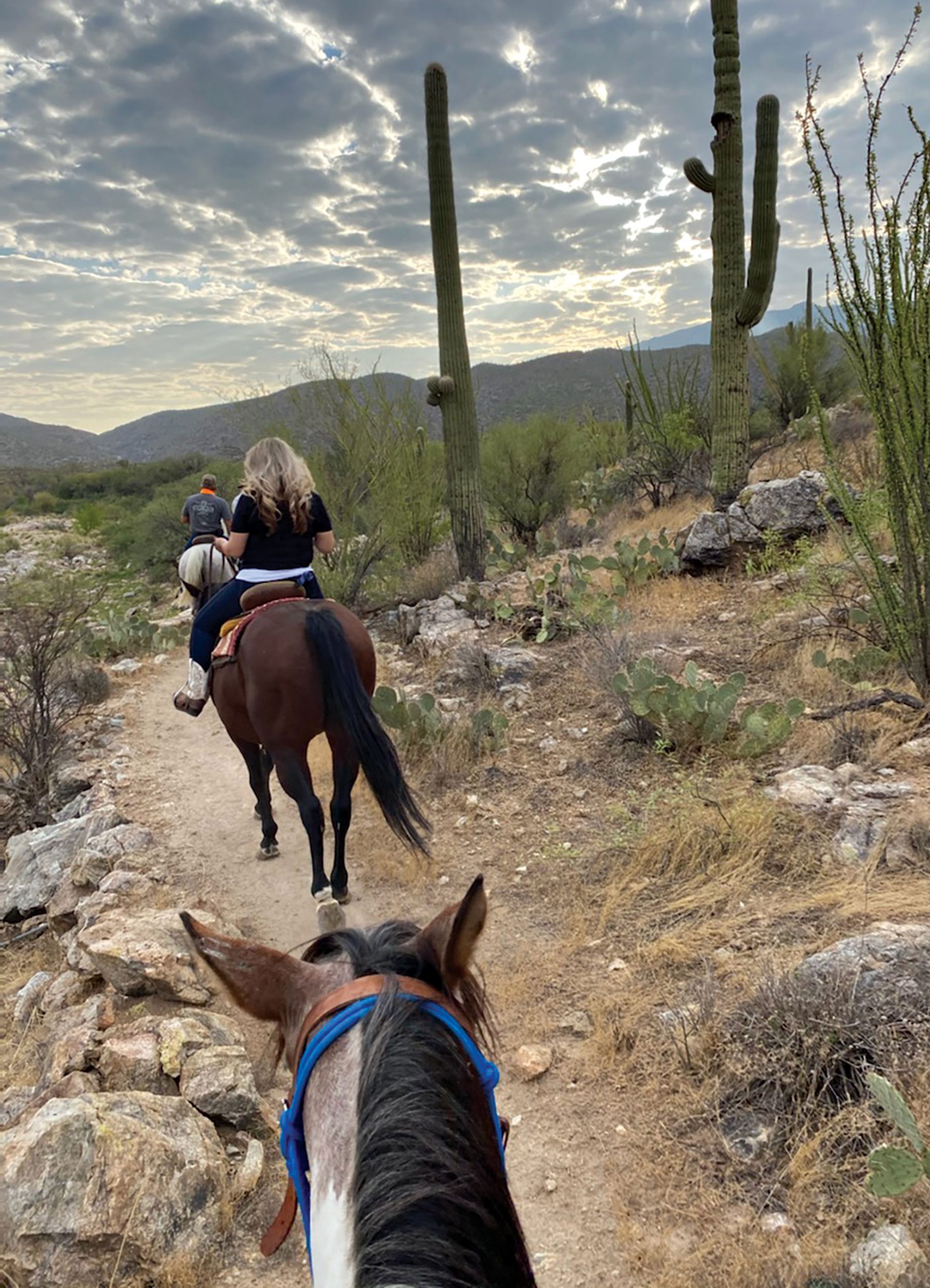 Tanque Verde’s most iconic activity by far is the Cowboy Cookout, a Western-style soirée featuring live music, a bar and a barbecue feast. Hosted every Wednesday and Saturday at Cottonwood Grove, the resort’s outdoor events venue, the Cowboy Cookout brings guests together – at a safe distance – to dance, drink and dine under the stars.

Embrace the true rancher lifestyle with a horseback ride through the desert to the Old Homestead, a stone building constructed in the ’30s for Converse and his wife, where a hearty breakfast of Tanque Verde’s famous blueberry pancakes, ranch eggs, biscuits, sausage and bacon is served.

Perhaps take another dip in the pool before you bid adieu to this Western wonderland where Converse’s cowboys once roped rowdy steers – and maybe stop by Casa and dig for old Western flicks on your way out. You’re a rancher now, after all.

Here’s what to bring on your sojourn down south: 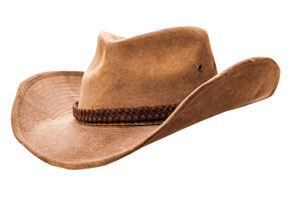 Cowboy hat: You’ll want to look the part when you snap a pic atop your steed, but make sure your headgear is secure so it doesn’t fly off when you’re loping through the desert. 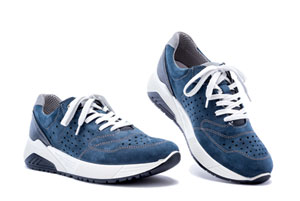 Closed-toe shoes: Most experiences on the ranch require tennis shoes or boots to participate. Save the sandals for the pool. 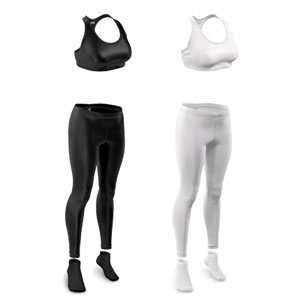 Activewear: Comfortable clothes like leggings or shorts are recommended for all activities.