The surprisingly shady roots of the NFL’s oldest team, our Arizona Cardinals.

Rocking gently in Chicago Harbor, guests aboard Charles Bidwill’s luxury yacht sipped cocktails and savored a gourmet meal on that fateful night in 1932. Never mind that Prohibition was still in effect, and it was the depths of the Great Depression. Life was good for the Windy City’s “charmingly flamboyant promoter and sportsman,” as the Chicago Tribune dubbed Bidwill – a very Chicago way to describe Al Capone’s former business associate, who’d made a fortune in dog and horse racetracks and was part-owner of the Chicago Bears football team.

At least one of Bidwill’s guests was feeling the pinch of the economy: a local doctor who also owned a team in the fledgling National Football League. The Chicago Cardinals, now the Arizona Cardinals, had always played second fiddle to the town’s beloved Bears, and was nearly $1 million in debt in today’s dollars. The doctor made the famously competitive Bidwill an offer he couldn’t refuse.

As Bidwill’s grandson and current team owner, Michael Bidwill, explained to The Arizona Republic in 2018, “After a few drinks, the then-owner of the Cardinals was complaining about how much money he was losing. And my grandmother said, ‘Well, sell it to Charley.’ As I understand it, we purchased it for $5,000 – $2,000 cash right there on the boat… My dad told me there was $45,000 of debt on the team at the time. It was recorded as a $50,000 sale.” 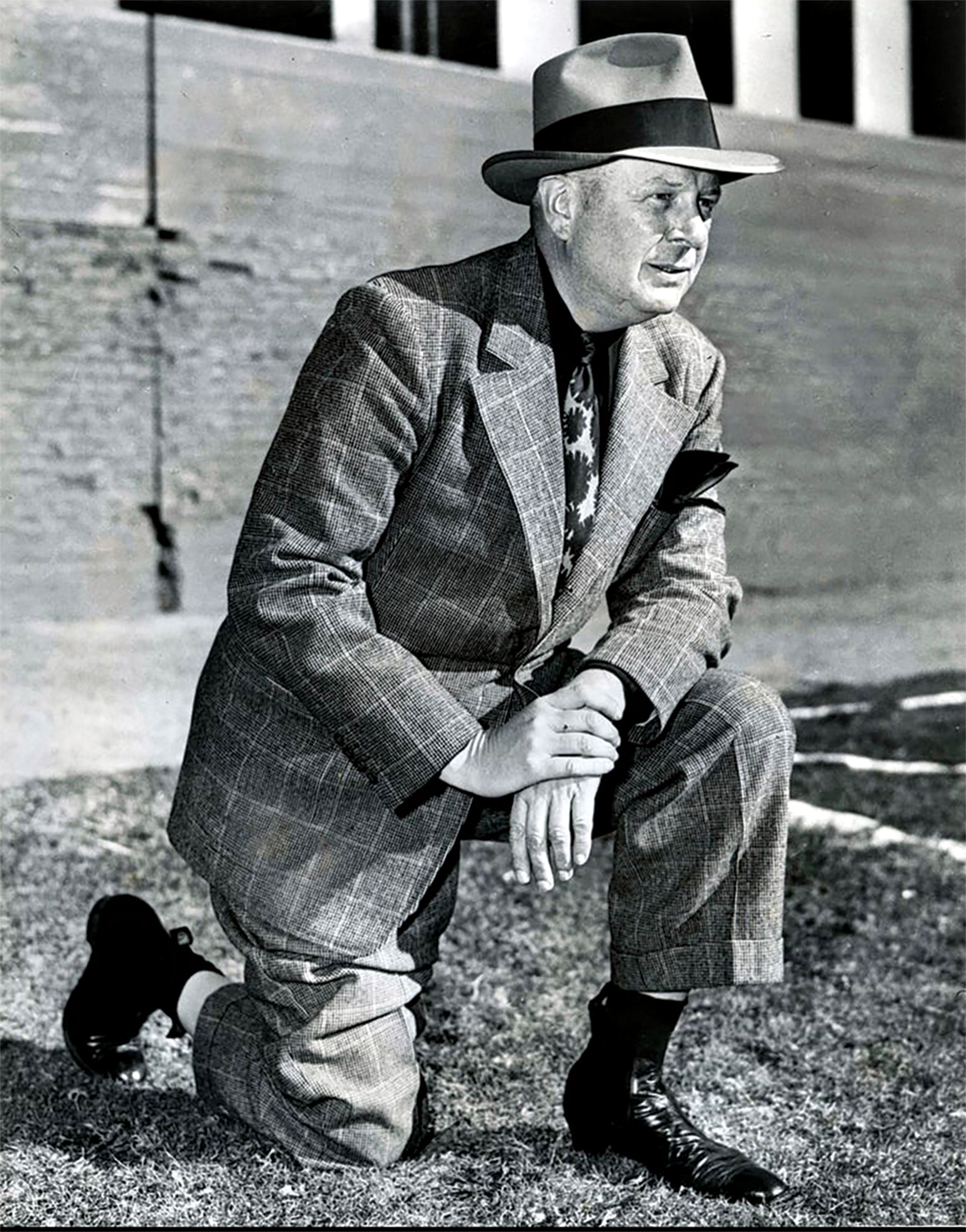 Not too shabby for a team now valued at more than $2.5 billion. But being bought on a whim by an alleged bootlegger and confirmed gambler isn’t even the craziest chapter of the long, convoluted history of America’s oldest professional football team.

Established in 1898 on Chicago’s South Side, the Cardinals were known as the Morgan Athletic Club until contractor Chris O’Brien moved the team to nearby Normal Field, after which they played as the Normals. O’Brien then thriftily outfitted the team in second-hand jerseys from the University of Chicago (aka the Maroons), which he rebranded as “Cardinal red.” They’ve been the Cardinals
ever since.

Meanwhile, Bidwill was building a diverse if sometimes extra-legal business portfolio. Born into a politically connected family on Chicago’s West Side, he earned a law degree and fought in World War I before becoming head of a firm that printed racetrack programs and betting tickets. Later, as the operational chief of old Chicago Stadium, Bidwill “brought prize fights and six-day bicycle races to the city,” according to the Tribune. But it was Bidwill’s involvement with infamous horse racing track Sportsman’s Park – founded by Capone – that would land him in hot water with the NFL and his wife in the crosshairs of a U.S. Senate investigation. “[Capone] conducted much of his illegal business there, occupying a box surrounded by his bodyguard ‘torpedoes,’ always heavily armed,” wrote the Tribune. 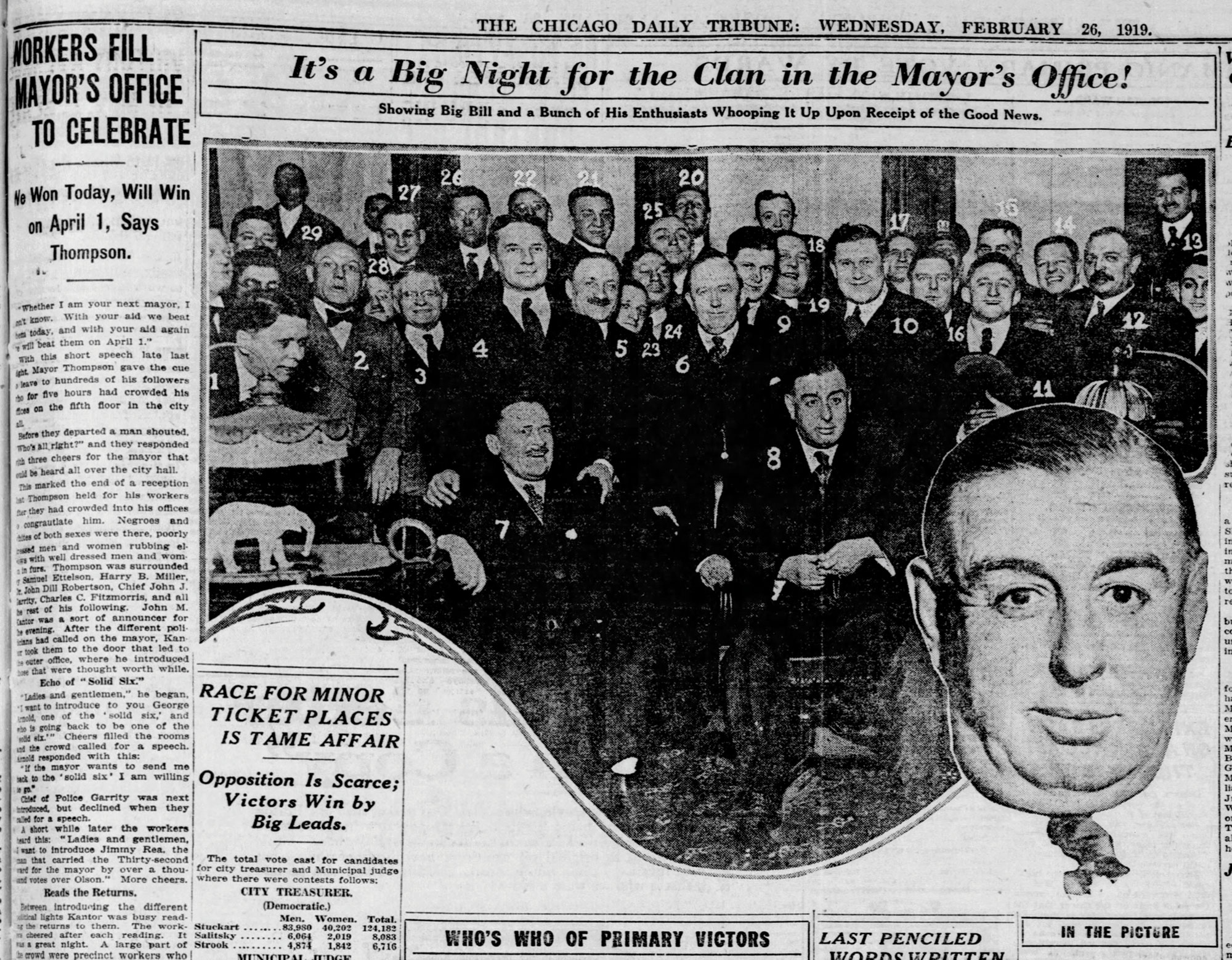 Bidwill (No. 9 in photo) was involved in the reelection campaign of Chicago mayor William Thompson in 1919; Photo courtesy Chicago Tribune

Less well known is that “Charles Bidwill, future NFL Hall of Famer, was a major stockholder,” according to Tracy Thibeau of the Professional Football Researchers Association. After Capone went to prison, Sportsman’s was sold to Capone’s lawyer, Edward “Fast Eddie” O’Hare. Just five days before Capone was released from Alcatraz, Fast Eddie was shot to death while driving home from Sportsman’s Park. His 1939 murder, “having all the characteristics of a Capone syndicate execution,” was never solved, but when O’Hare’s estate was settled, the Tribune revealed he “was a director of the Chicago Cardinals.”

“The revelation that O’Hare owned stock in the Cardinals shocked NFL president Carl Storck,” Thibeau writes. “He said that league records did not indicate that O’Hare was a franchise director and launched an investigation. Bidwill went on to say that O’Hare had acquired his stock from a previous owner…”

That year, Bidwill was “indicted in federal court along with James M. Ragen and others…” the Tribune reported. Ragen co-founded the Morgan Athletic Club, where the Cardinals started.

Bidwill’s indictment was dismissed, and in 1946 he bought the track outright – after the previous owner reported to the FBI he’d received a threatening note with a bullet inside and a gunman broke into his home. A year later, Bidwill died of pneumonia at 51. His widow, Violet, was named the new owner of the Cardinals, and the treasurer at Sportsman’s Park. 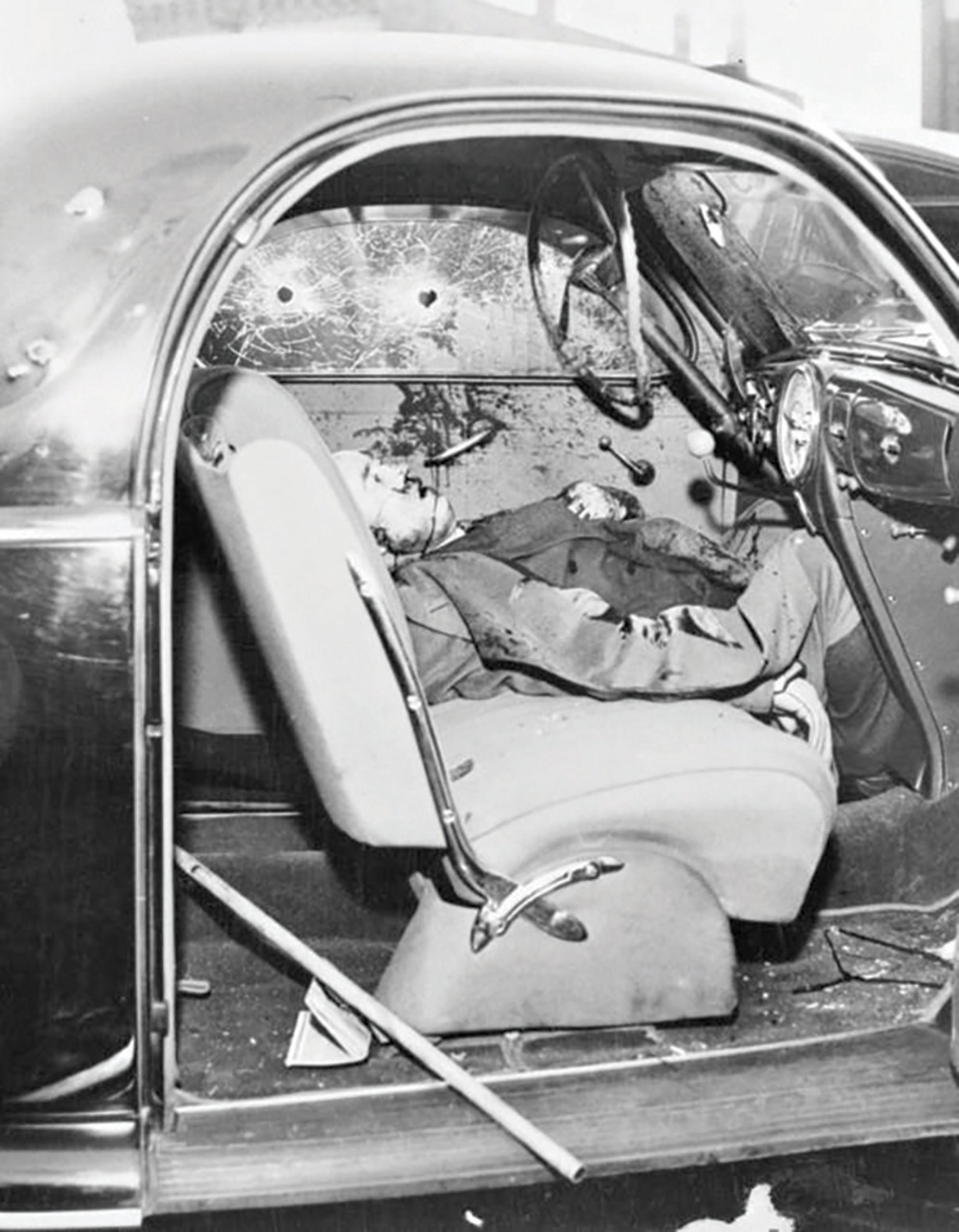 “I don’t think people know it, but my grandmother was the first female sports team owner, and she ran the team for 15 years,” Michael Bidwill told The Arizona Republic. Not that Violet avoided the spotlight. In 1950, she made headlines when Sportsman’s was named in the U.S. Senate’s Kefauver investigation, televised hearings that exposed Americans to the organized crime network known as the Mafia or mob. Per the Tribune, “the track’s auditor testified that he had lent $80,000 of the track’s funds to Paul ‘The Waiter’ Ricca, the reputed mobster.”

Violet accomplished one thing her husband didn’t. In 1948, the Chicago Cardinals won the team’s second, and still most recent, NFL championship. Nonetheless, the team was not long for the Windy City. Faced with flagging ticket sales and bankruptcy, the Bidwills moved the franchise to St. Louis after the 1959 season.

Had he lived to see the championship, Charley would have been thrilled. Football was never about the bottom line. Reminded he lost more than $500,000 on the team, Bidwill told the Tribune: “What the hell. What good is that dough if you can’t have fun with it?” 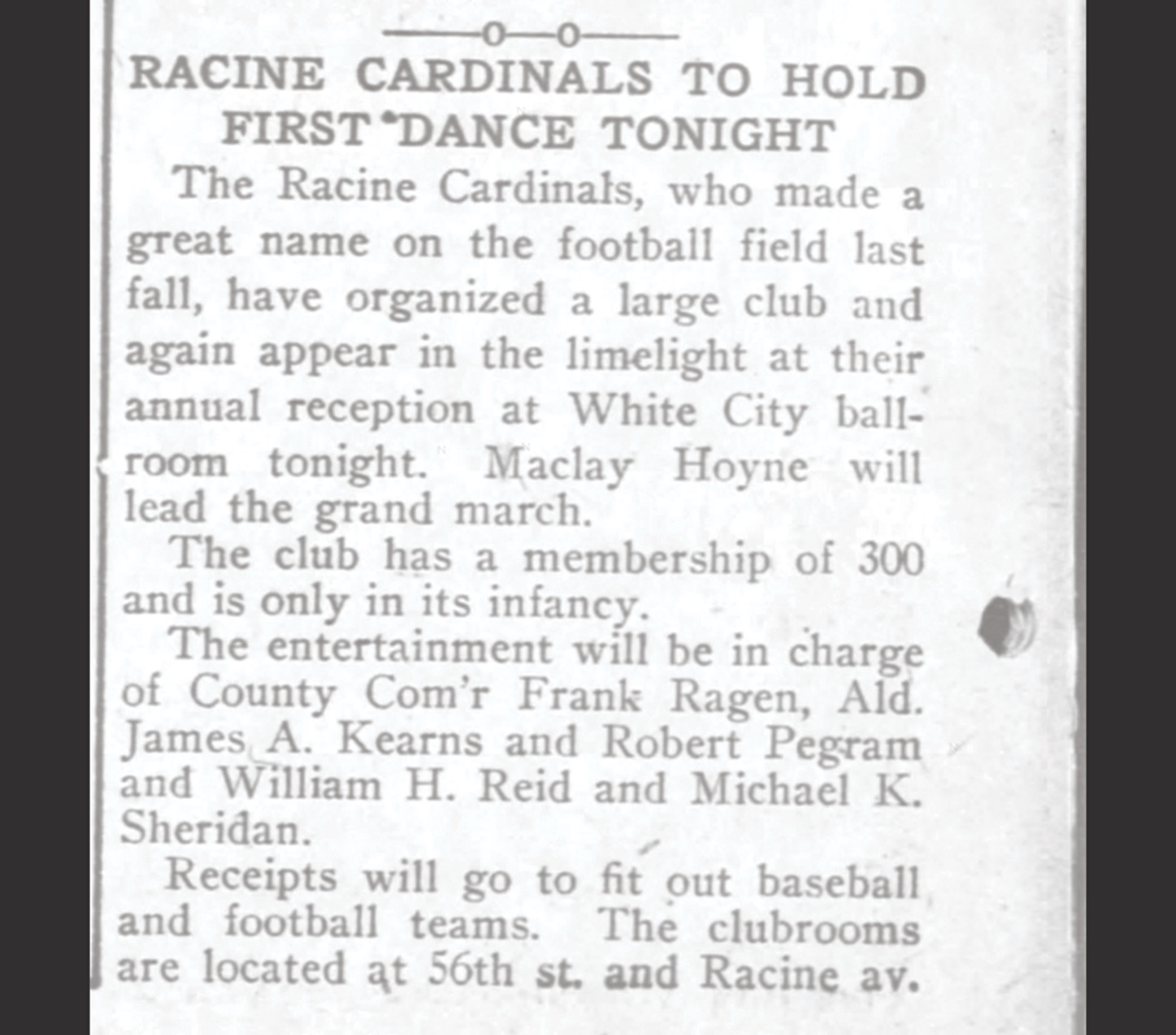 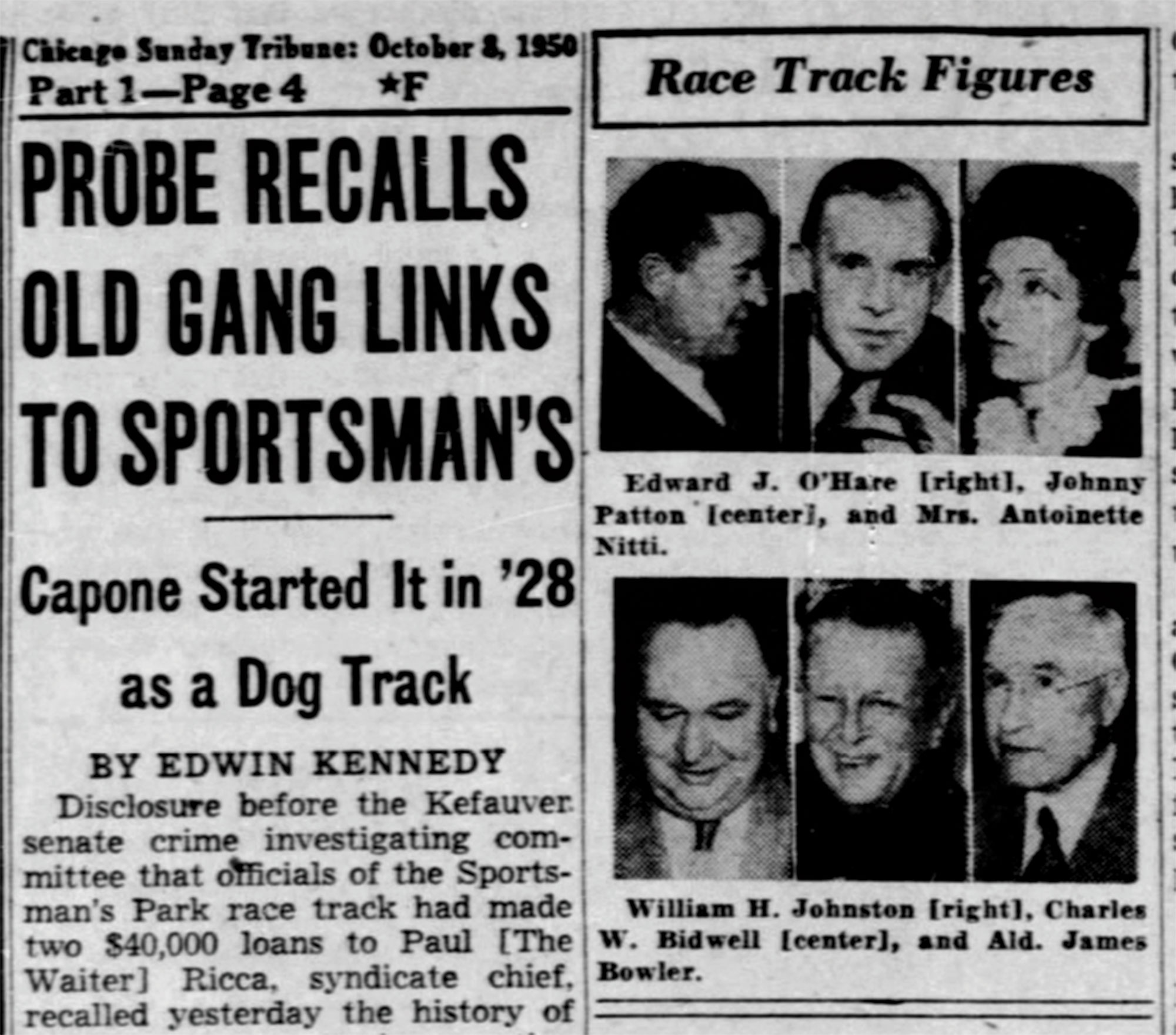 As the NFL kicks off its season in the midst of a worldwide pandemic, it’s completely obscured another shocking development. After decades of preaching about the dangers of sports gambling, the NFL not only allowed the former Oakland Raiders to relocate to Sin City, but under the cover of COVID19 signed a new 10-year labor agreement that, according to ESPN, lets owners and players share revenues generated “by the operation of gambling-related businesses located in or physically attached to an NFL stadium.”

So don’t be surprised when betting booths start popping up between the hot dog stands and beer carts at State Farm Stadium. But here’s the surprising part: What if the reason the NFL was always so uptight about sports gambling was because a full quarter of NFL teams has ties to gambling and organized crime?

1933 – Bidwill convinces his friend and fellow racetrack owner, Arthur Rooney Sr., to establish his own NFL franchise, the Pittsburgh Steelers.

1944 – The Cleveland Browns are founded by Arthur “Mickey” McBride, who ran the mob’s racing wire, a gambling results news service for illegal bookies, which the U.S. Senate’s Kefauver Committee called “Public Enemy No. 1.”

1953 – Carroll Rosenbloom, who also owned casinos in Cuba and the Bahamas, buys the Baltimore Colts.

1960 – The Los Angeles Chargers are founded by longtime gambler Barron Hilton, better known for his family’s chain of hotels, and for being Paris’ grandfather.

1972 – Rosenbloom swaps his Baltimore Colts team for the Los Angeles Rams straight up, and later drowns while swimming off the coast of Florida.

1972 – Al Davis, who was once business partners with a mob-connected Las Vegas casino mogul, buys the Oakland Raiders.