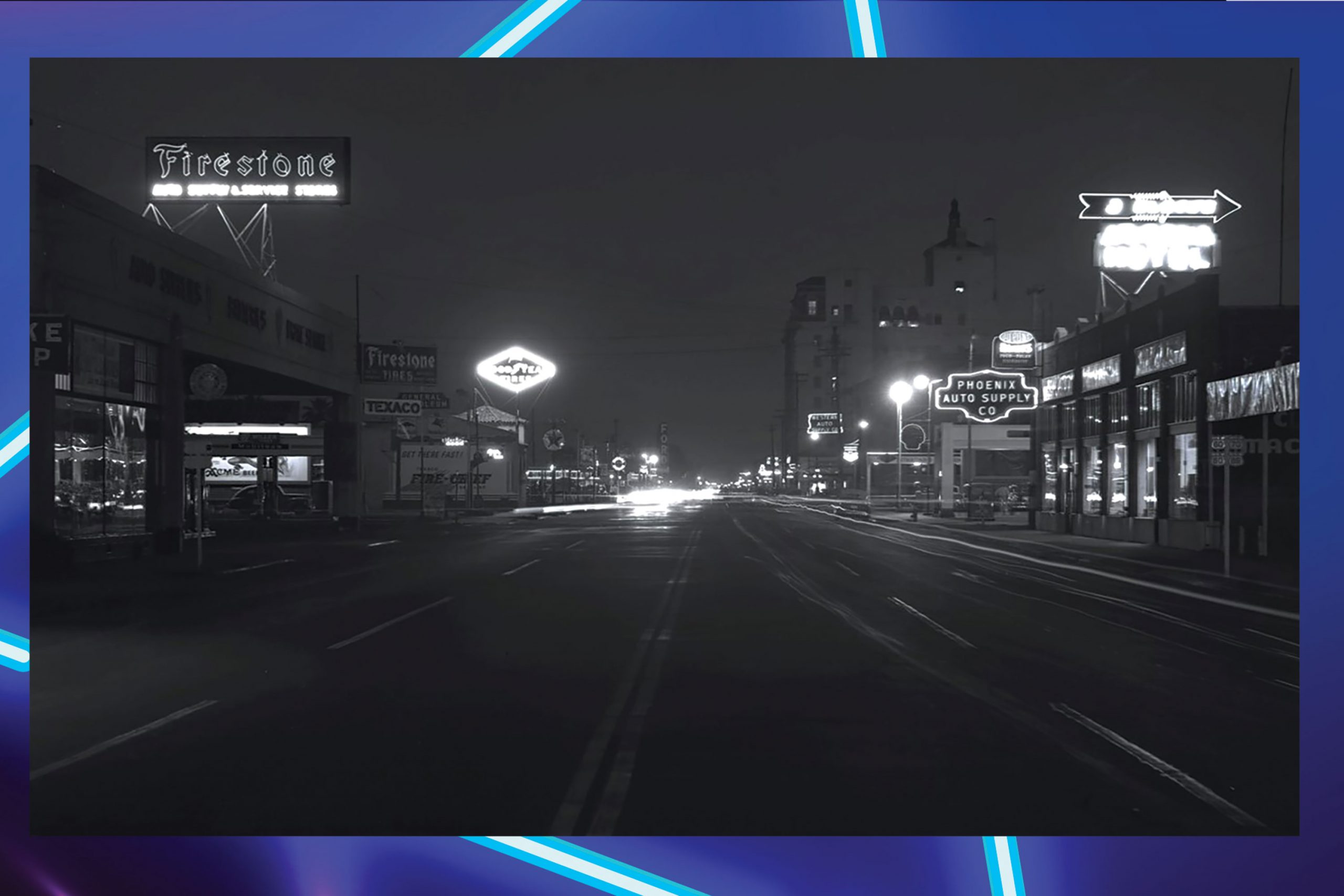 Phoenix once had the world at its fingertips. There were Polynesian villages, royal chateaus and a Middle Eastern oasis set among the Statue of Liberty, Old Faithful and the Alamo in a scene reminiscent of Disney’s Magic Kingdom. This mid-century assemblage of geographical whimsy consisted of motels cloaked in exotic themes  along Van Buren Street, one of the nation’s most dazzling drags during its midcentury heyday.

For many tourists, Van Buren and its miles-long neon slumber party defined their Phoenix experience. But this kitschy wonderland, like a mirage, faded and disappeared. What created Van Buren’s bright lights, and then caused them to wink out decades ago?

The city’s greatest light spectacle  started as just another dirt road in a dusty town. When the Phoenix townsite that now encompasses Downtown was created in 1870, its northernmost street was named after the eighth U.S. president, Martin Van Buren. For many years, Van Buren was called Tempe Road east of Seventh Street and Yuma Road west of Seventh Avenue. But as autos gained popularity, the street’s reach would extend much farther. 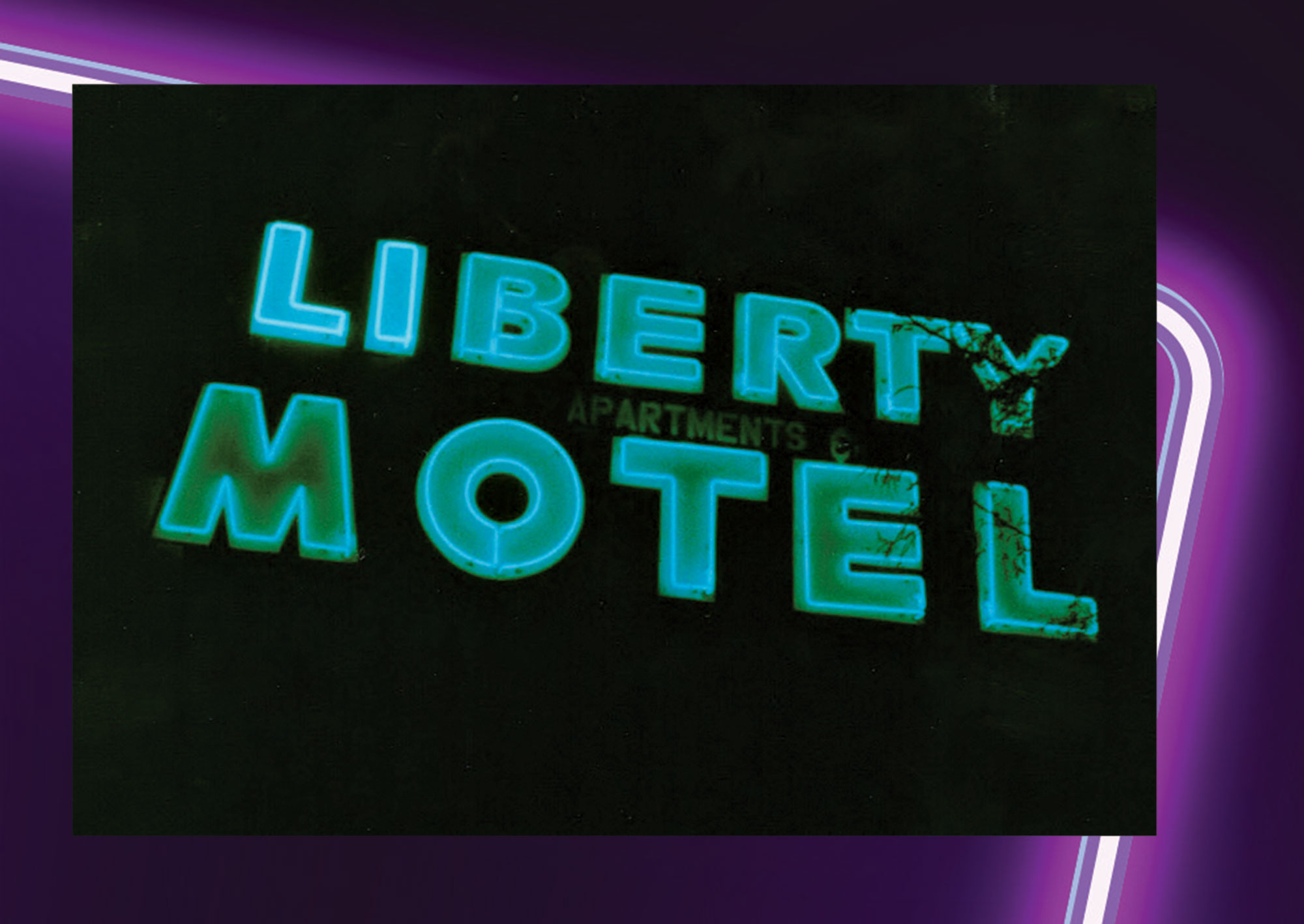 Around 1915, Van Buren became part of an informal network of roads called auto trails, with names like the Bankhead Highway and the Old Spanish Trail. These were motley, poorly marked, long distance routes cobbled together from existing roads by private booster organizations. In 1925, the federal government officially designated Van Buren as U.S. Highways 80 and 89. A few years later, U.S. Highways 60 and 70 were added to Van Buren’s résumé, allowing motorists direct routes to both coasts, Mexico and Canada.

“Van Buren was the most developed stretch of the only place in America where four U.S. cross-country highways overlapped each other,” Donna Reiner, a local history author, says. “The street acted like a giant funnel that collected the tourist traffic between the Mexican border and Route 66.”

And all these travelers needed someplace to stay. Roadside lodging initially consisted of auto camps – spartan places where motorists pitched tents and shared a communal bathroom. Gradually, accommodations upgraded to cabin camps or cottage courts with individual buildings, then tourist courts with a carport between units, and eventually L- or U-shaped motels. By 1941, Phoenix claimed to have the “largest number of tourist courts, cabins and motels of any city in the U.S,” according to the book, A Survey of Phoenix, Arizona and the Valley of the Sun, Arizona 1867-1941, by Arthur G. Horton. 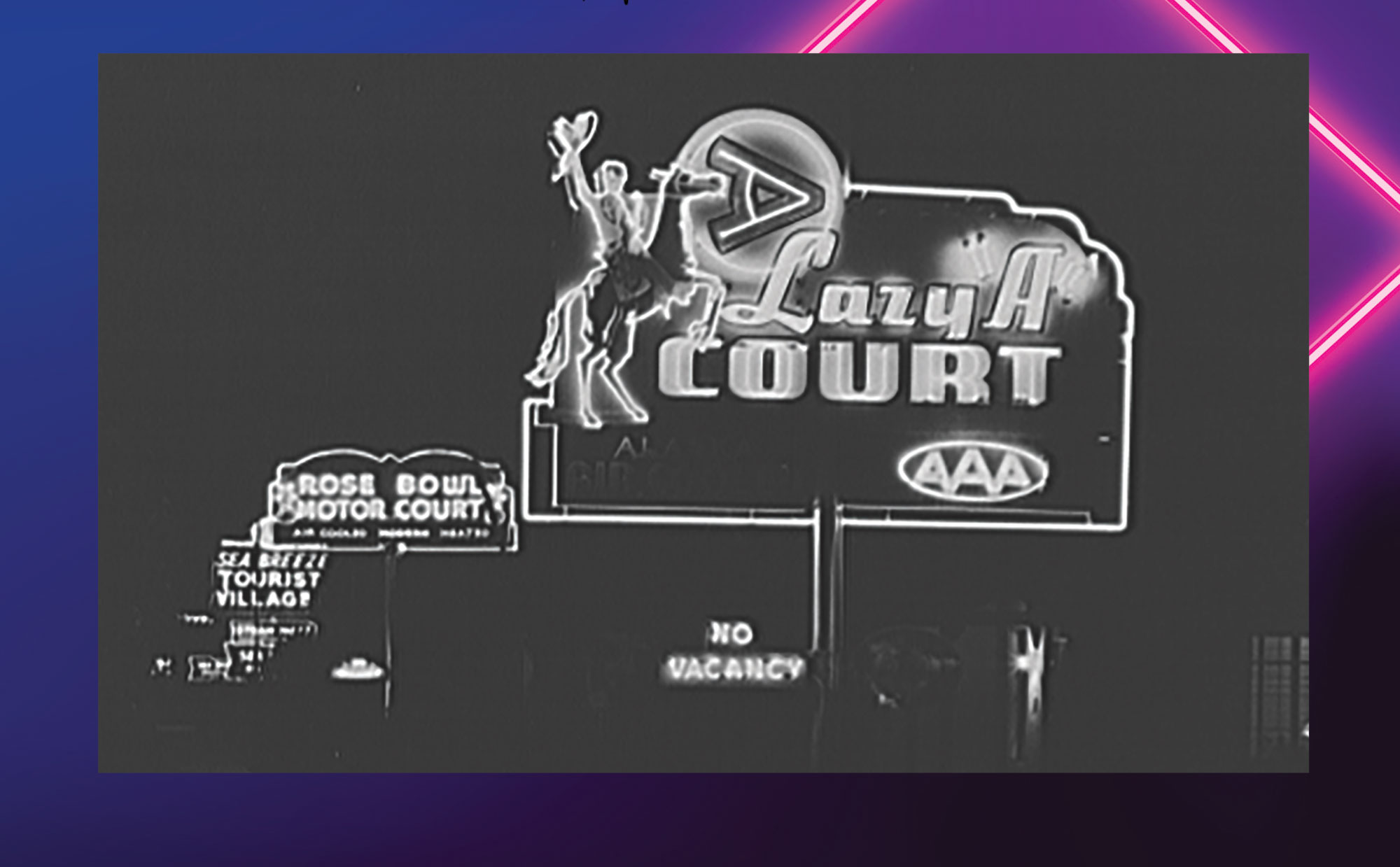 After World War II, new construction on Van Buren transitioned from mom-and-pop motels to corporate, multi-story motor hotels. These larger venues wooed travelers with amenities such as miniature trains, swimming pools and fine dining. “I remember my family having Thanksgiving dinner in 1963 at the restaurant connected to the Rose Bowl Motor Hotel,” says Arizona native John Jacquemart. “It was a swank place!”

By the early 1960s, Van Buren had reached its zenith, whether measured in motel numbers or their creative chutzpah. Dubbed the “Funset Strip,” it was touted as a tamer, casino-less version of the famed Las Vegas Boulevard. The strip’s future seemed as bright as its neon glow, but its demise had already been set in motion. 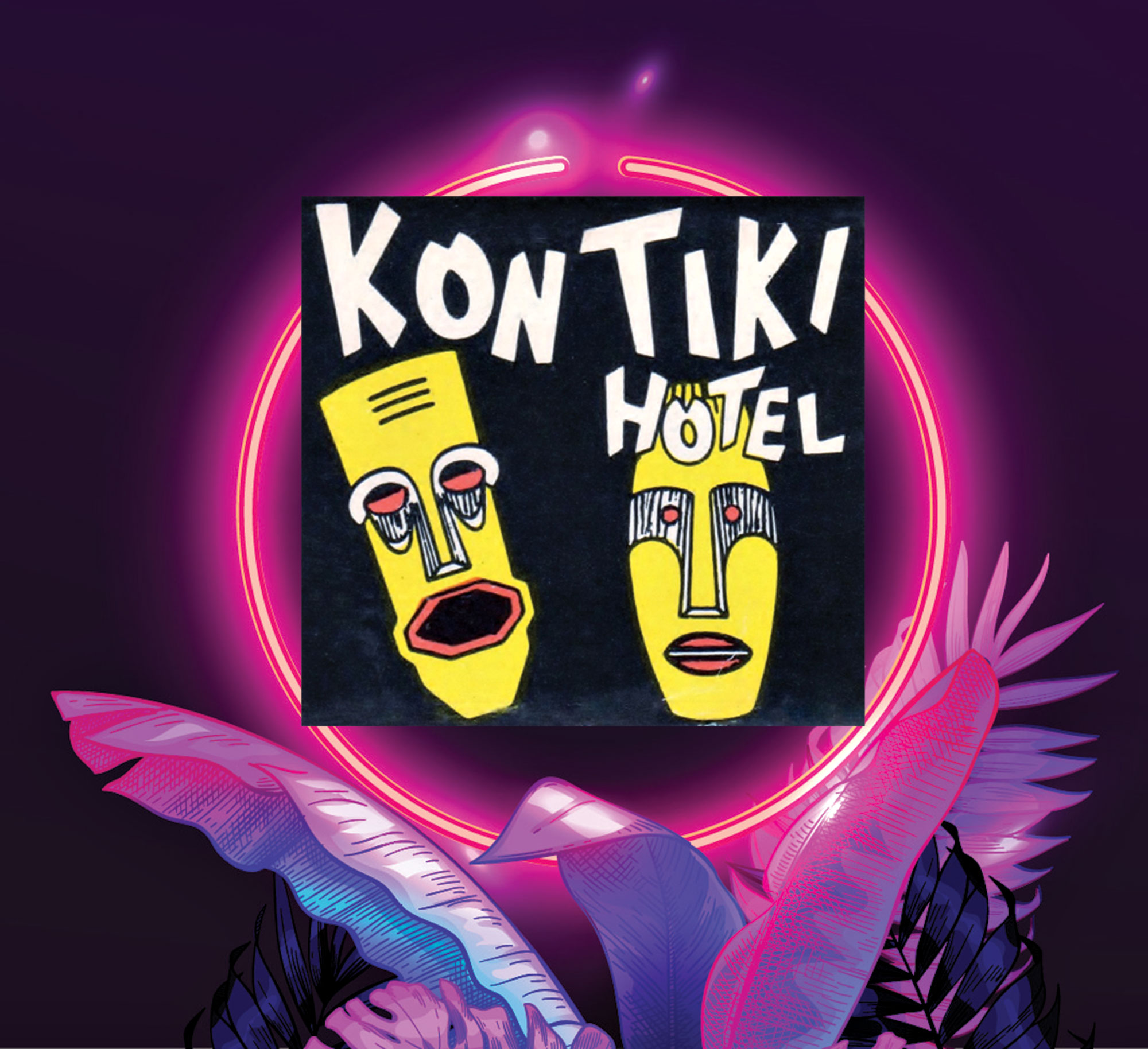 Motorists were transitioning from two-lane blacktops to speedy superhighways funded by the Federal Aid Highway Act of 1956. Van Buren’s downward spiral began in the 1970s when the Maricopa Freeway – comprising portions of today’s I-17 and I-10 freeways – with its shiny, new and nationally franchised lodging chains, allowed travelers to bypass the street. Demand decreased for the dated, less-accessible Van Buren motels. Some motels turned to “weekly or monthly rates” or reinvented themselves as “adult” hideaways with hourly rates and X-rated movies, both of which lent to their frequent appearances in police blotters. The street’s death knell came in 1989, when Van Buren was decommissioned as a federal highway.

Motels along Van Buren closed one by one over the years, blinking out like the neon tubes on their malfunctioning signs. From the estimated 200 motels at its peak, only a few, rundown places remain today. Not even the ultra-kitschy Log Cabin Motel could avoid destruction, despite preservation efforts in 2010.

But Van Buren’s legacy didn’t have to end that way, according to Steph Carrico, a local artist who owns The Trunk Space, an art gallery and performance venue. “Places need to have carbon; it’s something you can’t just make. They need time to exist and build it up,” she says of the importance of a building’s age and the patina left over the years by people, sort of like carbon paper. “The Log Cabin was unique to Phoenix, had lots of carbon, and its restoration could have been an anchor for redevelopment of that section of Van Buren… [it] feels like such a missed opportunity for Phoenix.”

Gone but not forgotten overnight accommodations on Van Buren near 24th Street:

This hostelry opened in 1939 with individual structures that appeared to have been created by Paul Bunyan. This woodsy aesthetic carried over to the swimming pool, which had an oversize water wheel. The motel was razed in 2010, but Michael Levine, who preserved several Phoenix warehouses, rescued its neon sign and donated it to the Mesa Preservation Foundation for use in a future museum.

The motel opened in the late 1930s. Its evocative name was a play on its owner’s name, Robert H. Sebree. The motel’s amenities included a heated swimming pool and telephones in every room. The Sea Breeze was demolished in the mid-1960s to allow construction of the 200-room Hotel Desert Hills, which became The Salvation Army’s Phoenix Social Service Office in 1984.

This tropical accommodation offered “A Little Bit of Waikiki in the Heart of Phoenix” when it opened in 1961. Its Googie design had a Polynesian theme, with flared angular roofs covered in Bermuda tile. Tiki masks, torches, tropical plants and a fire fountain added to the South Seas motif. The 111-room Kon Tiki closed in 1993, the building was demolished in 1997, and the site is now a parking lot.