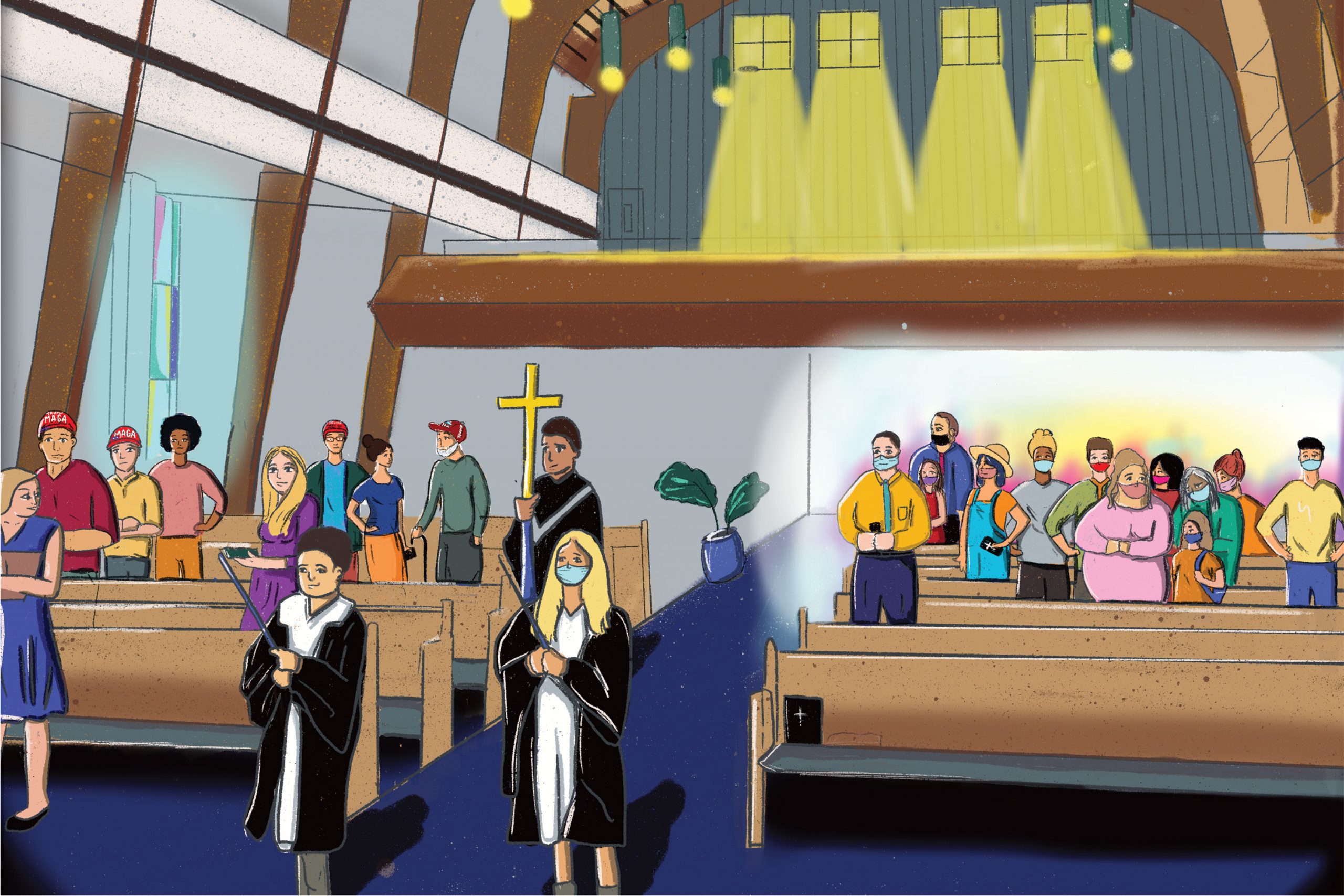 Arizona has become one of the world’s hardest hit regions per capita by COVID-19 and the poster child for how not to handle a pandemic. At press time, the virus has killed nearly 2,000 people throughout the state, creating a deep and insuperable divide not only between political parties and socio-economic groups, but among the Valley’s Christian churches. The wearing of masks, decisions on when and to what degree to open, and whether to address the politics of the pandemic from the pulpit have been divisive issues.

The Rev. Warren H. Stewart Sr., head of the First Institutional Baptist Church in Phoenix, has kept his parish closed throughout the pandemic. His rationale is theological in nature, based on his belief that responding to the culture – including current events and political concerns – is modeled in the Bible and should be emulated by the church.

“Jesus told the truth. He spoke against injustice in the establishment. He came to preach the good news to the poor and the oppressed,” Stewart says.

In explaining his willingness to broach political matters from the pulpit, Stewart cites Dr. Martin Luther King Jr., who maintained the church has an obligation to provide moral leadership and condemn unjust and unsafe politics. Stewart, who personally campaigned for a Martin Luther King Jr. Day in Arizona in 1989, explains that he is “vocal in a prophetic, not political, way.” When it comes to specific politicians and their policies, though, he pulls no punches.

“I have spoken out against the current leader and his administration for taking from the poor, impoverished and oppressed, who are just trying to survive day by day, while cutting taxes for the rich,” Stewart says. “And I question why so many white evangelical Christian churches support [President Donald] Trump when he is going against everything the Bible teaches. I say that unapologetically, without shame and without a doubt. And I will continue to say it.”

Not every Valley church is quite so willing to address the politics of the state and federal handling of COVID-19 from the pulpit. But when they do, the response of Valley church leaders to the pandemic has been as divided as the culture at large has been on issues such as marriage equality and abortion.

Dream City Church might qualify as one of the evangelical churches that Stewart specifically calls out. Founded in 1923 as Phoenix First Assembly, the multi-location megachurch reports an astounding weekly attendance of 22,500. Given that President Donald Trump campaigned there on June 23 – renting the space from its owners in what was officially a private event – it would not take a sign from God to conclude that the church’s parishioners are generally right-leaning politically.

Like Stewart, the Rev. Luke Barnett appears comfortable taking politics to the pulpit, albeit from the other side of the aisle. The inspiring, Joel Osteen-esque preacher has described Arizona Governor Doug Ducey as a “wonderful man of God,” and wove plans for Trump’s June 23 visit into his Father’s Day message on values.

Despite getting backlash, Barnett did not cancel the event, in which maskless attendees crowded together inside the church, apparently oblivious to spiking COVID-19 numbers statewide, stressing instead the importance of faithfully keeping promises.

“We are going to be people of our word,” Barnett says. “If we buckled, then I will have lost my integrity.”

Trump spoke, sans mask, on the Dream City stage in front of nearly 3,000 Trump-adoring students. The facility was rented out by Turning Point Action, a conservative nonprofit organization, and hosted by its affiliate, Students for Trump. According to the church website, the rental did not constitute an endorsement of the opinions of its renters. Nor did it abide by Centers for Disease Control guidelines for COVID-19, leading Phoenix Mayor Kate Gallego to state that the event was neither sanctioned nor permitted by the city.

Barnett acknowledged the need for precautions in an earlier sermon reference to the virus, but added, “If someone reaches out to take my hand, I am going to shake it. I’m operating on faith, not fear.”

There is something to be said for quiet in the midst of a storm. Sun Valley Community Church in Gilbert avoids preaching the politics of anything, no less the pandemic. “We don’t talk about politics,” says Robert Watson, teaching pastor for the nondenominational church. “But we encourage everyone to be good citizens, to vote their conscience and to love people.”

When the pandemic hit, the church searched for a way to respond with relevant sermons. After surveying members and discovering they were struggling with health issues, Watson abandoned his prepared series. “We make adjustments to our scheduled teaching content in response to the needs of our community,” he says.

One megachurch in Scottsdale has chosen to remain detached from the politics of the pandemic.
“I don’t respond to the culture,” the pastor says, requesting anonymity. “I respond to God and to you [the congregation].” Instead of focusing on changing the secular world, he spoke about focusing on the Gospel and God’s power to change ourselves.

The Rev. Alfred Craig Jr. says the overt discussion of political inequity has traditionally fallen to evangelical, African Methodist Episcopal and Protestant denominations. While sermons are typically written independently by clergy, church policy is usually determined by church leaders or elders.

Craig doesn’t believe political sermons are common in the Valley – perhaps to church communities’ detriment, in some cases. “A lot of churches and pastors do not confront it. Many are more concerned about numbers [of members in the church] than changed lives,” he says.

The pastor at IAM Church to the Nations in Phoenix, Craig’s sermons maintain a strategic spiritual balance between responding directly to today’s political personalities and casting a blind eye toward wrongdoings in the government. With Republicans and Democrats sitting side by side in the pews, Craig chooses instead to talk about relevant character issues.

“If someone is lying, whether it be a brother, a sister or a president, we stand against it,” Craig says.

“I don’t talk about Trump or [President Barack] Obama. God preached about principles. This kind of preaching works whether you are a Democrat or a Republican, male or female.”

But when it comes to the pandemic, the church is not as politically correct. Craig looks to science and the CDC, rather than Trump, for his guidance, requiring mask-wearing long before it was mandated.

“Our congregation trusts us, and we are responsible for our people,” he says. “Jesus would say, ‘Wear your masks.’”