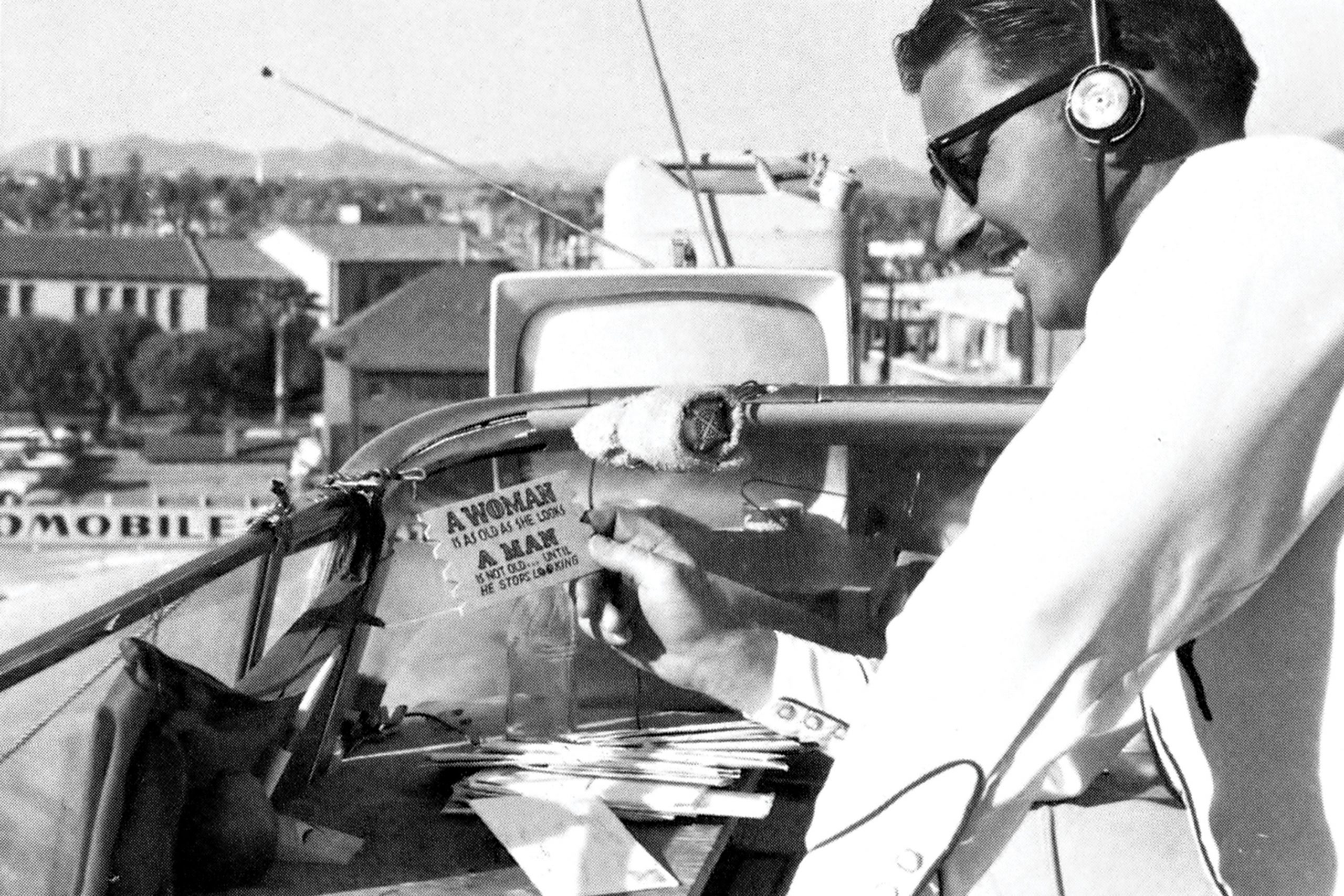 At the height of the space race with the Soviet Union, a lone pioneer in Downtown Phoenix embarked on a long, difficult mission into the heavens. “Lonesome Long John Now in Orbit” proclaimed a nearby marquee, the words fashioned by the same local business that underwrote his journey. “New World Record,” it added, optimistically.

But John Roller, aka Lonesome Long John, wasn’t an astronaut, just an aspiring country singer. He hoped to hit it big in the music industry thanks to a novel publicity stunt: setting the world record for flagpole sitting, a befuddling fad at the time. Despite challenging living conditions that make today’s social distancing guidelines seem like a walk in the park, Roller managed some notable achievements before returning to Earth. 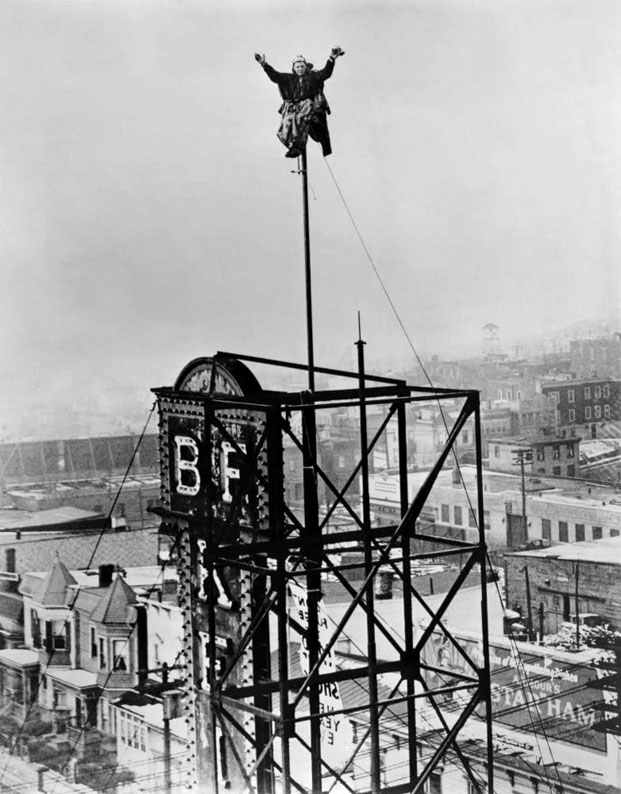 Flagpole sitting was a zany feat of endurance that began in the Roaring ’20s, and had a resurgence in the 1950s. The more daring practitioners of this fad perched on a stool fastened atop a flagpole, exposed to the elements. Most, however, lived in some sort of a container fastened to the top of a pole. Mauri Rose Kirby, a 17-year-old girl, became the champion on March 13, 1959, after living in a 3-by-3-by-6-foot box secured atop a pole for 211 days at a drive-in theater in Indianapolis.

In Phoenix, a car dealership and country radio station 1480 KHAT decided to capitalize on the fad for marketing purposes and hired Roller for the exploit. “An El Paso radio station had done a similar promotion that produced impressive ratings,” Ray Odom, former owner of KHAT, says.

Roller, who grew up in Arkansas and had recently moved to Phoenix because of health issues, landed the high-flying disc jockey job. He resembled Tennessee Ernie Ford, sounded like Hank Williams and was “determined… [with a] heart as big as the country around him,” according to Folk and Country Songs magazine in 1959.

He waved to spectators as an automotive lift raised the car into the sky and secured it atop a stout, 40-foot pole over Read Mullan Ford’s used car lot at Third and Van Buren streets. If he broke the flagpole sitting record, the snazzy car would be his.

The 28-year-old Roller began his disc jockey career billed as the “Arkansas Traveler,” but his broadcast duties in the Ford were strictly vocal – no turntable, no soundboard, just a microphone.

“He worked 12-hour shifts, coming on every hour for about five minutes,” Odom, now 93, says.

“He’d play guitar, sing a song and talk about the weather up there. People would tune in to hear his updates.”

“People would hear John on the radio and drive 50 miles to see him,” Odom says. “They did really good business at the dealership.”

Living an elevated lifestyle in the Ford, which swiftly took on the wear and tear of a high-mileage vehicle without ever leaving the dealership, proved challenging. Roller bathed in a child’s plastic play pool in the back seat, but soon switched to sponge baths using a bucket. His laundry dried on an improvised clothesline.

A $100 prize was offered to the first person who could prove that Roller snuck down from the car before breaking the record. “Dad used to drive us by there every few weeks for cheap entertainment,” Phoenix native Dave Helton says. “I was only 6, but I recall always waving at him.”

Meals were delivered on a tray via a rope and pulley system attached to the rear bumper. Then there was the big, unspoken question about what follows eating. “I was a second-grader at Saint Mary’s Elementary School. Our playground was the church parking lot adjacent to the flagpole,” John Driscoll, who worked in radio, says. “We watched them haul up food and lower buckets of who knows what.” 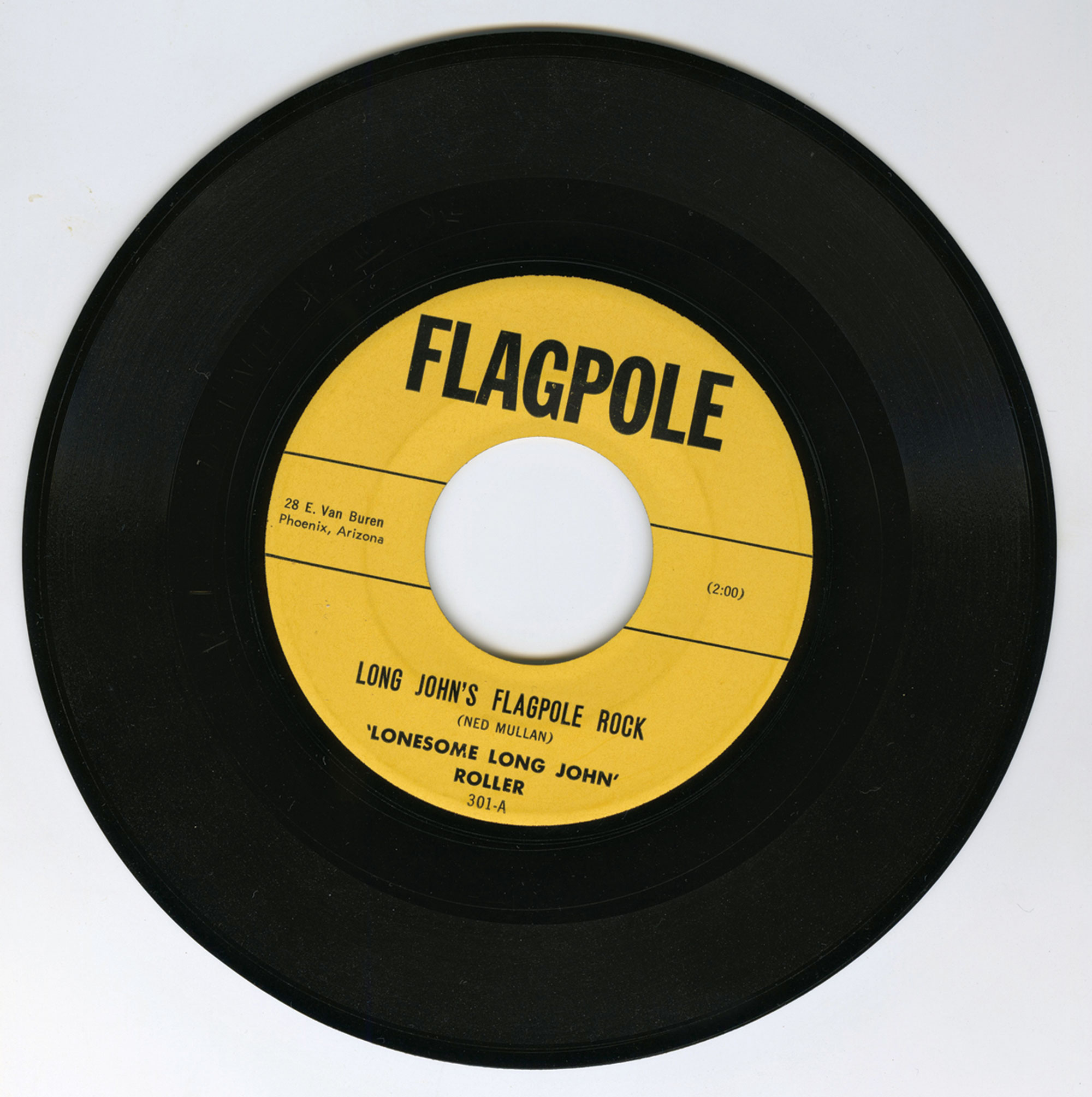 Roller wrote a few tunes while he was sky-high, including “Flagpole Rock,” which he recorded with guitarists Al Casey and his wife, Corky Casey. The trio performed in the Ford, with the sound engineer on the ground. “Al Casey told me about the frightening trip up to Roller’s car on a small wooden chair, attached to a pulley by a rope,” music historian John Dixon says. “The rope was fastened to the bumper of a car on the ground, which moved to raise a passenger to the rear of Roller’s car. He and Corky then crawled into the Ford through the open trunk.”

In March, Roller received some unexpected company. His cat, George, who was also aloft, gave birth to four kittens and was subsequently renamed Georgette. But Roller sought another type of companion. “He asked me to get a girl to go up there one night,” Odom says. “When I declined, John responded, ‘Heck, I don’t know if I would have done this if I had known those were the rules.’”

On June 14, 1959, Roller triumphantly descended from the Skyliner after being up in the air for 211 days and 22 hours, beating the previous record by 13 hours. “I feel just like a man who’s been through a war,” Roller told The Arizona Republic. “It’s over, and I don’t especially want to go through it again. I never worked so hard in my whole life as while I was up there.”

Roller rewarded himself with a month’s vacation in Arkansas. Little is known of his life afterward, but it didn’t involve musical fame. His local achievement, though, is remembered fondly by those who witnessed it, except perhaps by the dealership’s salespeople. They had the unenviable task of emptying the honey bucket.

Alvin “Shipwreck” Kelly
Kelly started the craze by sitting atop a pole for 13 hours to publicize a movie in 1924. He subsequently toured the U.S., giving exhibitions perched on a bar stool-size padded seat, secured only by a leg strap. His record was 49 days atop a 225-foot-high pole in Atlantic City in 1930. He was still performing when he died in 1952 and spent an estimated 20,000 hours pole sitting.

Ray “Old Iron Pants” Vetter
The Phoenix radio announcer lived atop a 30-foot metal “saguaro” that supported a box outfitted with a swamp cooler in 1951. His perch was near third base at the Phoenix Softball Park, which opened at 17th Avenue and Roosevelt Street in 1946. Vetter bet stadium announcer Bill Close $100 he could live there for six weeks, or until the park drew 105,000 spectators. A monsoon drove Vetter from his roost after only 30 days.

“Pole-Sitting” Peggy Townsend Clark
Clark lived in a 6-by-6-foot box positioned atop a flagpole for 217 days in Gadsden, Alabama, in 1964. The 17-year-old weathered a blizzard and tornado to set the record. A radio station sponsored the feat at a drive-in restaurant. Clark had previously been confined to a hospital bed for two years for health reasons, and was confident of achieving her goal.